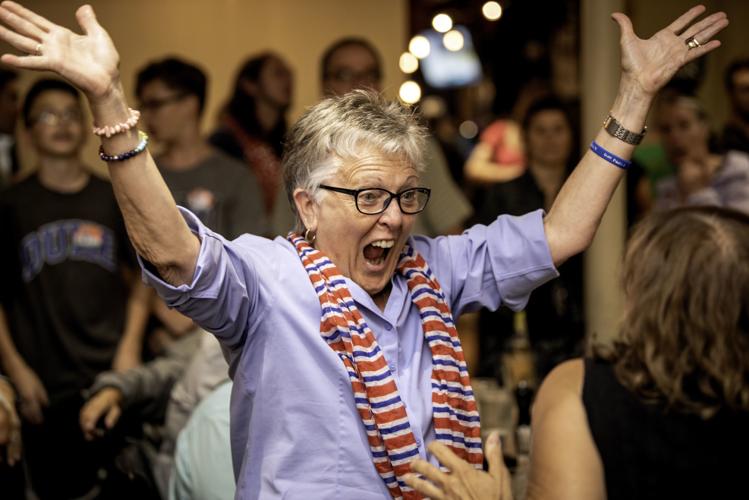 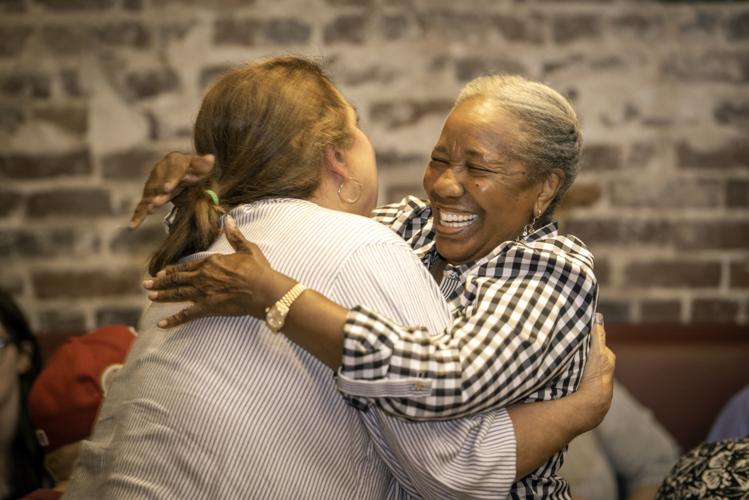 Jackie Hill hugs Jean Williamson, of Maryville, during the Democratic election watch party on Aug. 2 at Barley’s Taproom and Pizzaria in Maryville. 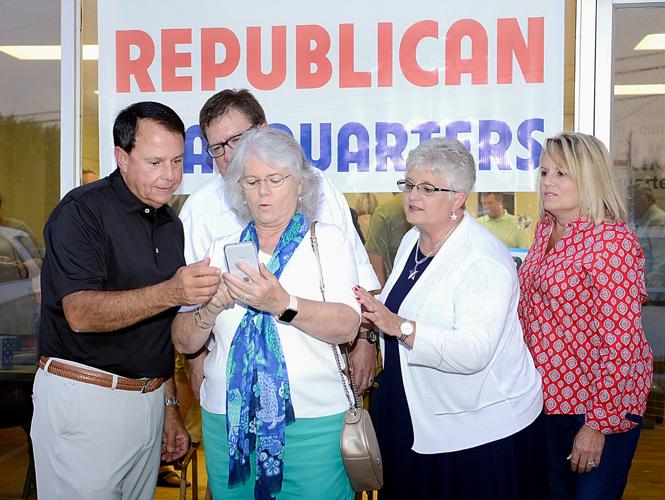 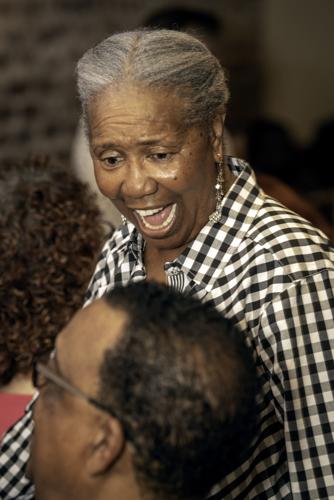 Jackie Hill visits with supporters Thursday night at the Democratic election watch party at Barley’s Taproom and Pizzaria in Maryville.

Jackie Hill hugs Jean Williamson, of Maryville, during the Democratic election watch party on Aug. 2 at Barley’s Taproom and Pizzaria in Maryville.

Jackie Hill visits with supporters Thursday night at the Democratic election watch party at Barley’s Taproom and Pizzaria in Maryville.

The upset victory of Democrat Jackie Hill, now representing Seat A District 1, was the exception.

Scoring an upset to the otherwise Republican-dominated County Commission, Democrat Jackie Hill won with 51.59 percent of the vote.

Mobilizing a network of churches and community ties, Hill garnered a total of 601 votes against her opponent, Rick Hudolin, who had 564.

Hill long has been known for helping the elderly, disabled or otherwise home-bound vote in local elections. Hill won absentee ballots by a landslide margin with 66 percent.

Campaigning alongside Hill, fellow Democrat Tanya Martin ran for the district’s B seat, but lost to Republican Joe McCulley.

Leading up to the election, the 72-year-old Blount County native emphasized her leadership credentials and strong ties to the area.

Since retiring in 2001, she has served on several nonprofit boards in Blount County, and was given the Legacy of Excellence Award from the Alcoa City Schools Foundation.

Hill’s father worked for ALCOA for 50 years, and her mother worked 25 years at Blount Memorial Hospital.

Hill was once recognized by Ebony magazine in its regular feature, “100 Best and Brightest Blacks in Corporate America.”

While working at photography company Eastman Kodak, Hill was the first female and African-American from the company to be selected to participate in the Executive Development Program at the University of Rochester, where she graduated with distinction and received a master’s degree in business administration.

Hudolin, her opponent, was a 48-year-old mortgage loan specialist who campaigned as a political outsider with common sense.

In July, an email from the Blount County Republicans accused Hill of improperly soliciting absentee ballots, a crime under Tennessee state law. Hill denied the claim.

Administrator of Elections Susan Hughes confirmed that a female candidate delivered filled-out requests for absentee ballots to the Blount County Election Commission — but that no crime was committed.

District 1 is located along West Lamar Alexander Parkway and up through downtown Maryville. It includes the Everett Recreation Center, Maryville City Hall and the Martin Luther King Kr. Community Center.

“We knocked on a lot of doors and talked to people,” McCulley said. “Meeting people face to face made the difference.”

McCulley’s victory represents a difference of 37 votes, with Martin reporting 564 and McCulley 602. Martin campaigned alongside Jackie Hill, who won the district’s other seat. Like Hill, Martin won the absentee ballot.

“I’m glad that one of us made it,” Martin said in a concession statement after results were posted. “I’m not gonna stop. I’m probably going to go for something else, I just haven’t decided what yet.”

McCulley’s victory not only renews Republican control of District 1 against a Democratic challenger, it also represents a continuation of McCulley’s previous stint on the commission, from 2006-10.

McCulley, a 74-year-old Vietnam veteran and former board of directors member for ALCOA, advertised himself largely on that experience.

In a questionnaire submitted to The Daily Times before the May primaries, McCulley wrote that he was the first commission to speak against the county’s decision to hold its debt in controversial swap and variable rate bonds.

He also wrote that he helped the county change the insurance programs for employees to one that “saved taxpayer dollars” while also lowering the employees’ co-pays.

“I am a conservative who will question spending and will not support a property tax increase or vote for a wheel tax,” he wrote.

McCulley, who has served on the Blount County Republican Party’s executive committee, was previously a Republican candidate for District 8 of the Tennessee House of Representatives in 2010.

During the Republican primary, he was defeated by Art Swann.

McCulley supported Trump during the 2016 Republican primaries, and later served as a delegate to the national convention.

He lost an election for the school board of Blount County in 2014.

His other public involvement includes veterans organizations, such as the American Legion and the United Veterans of Blount County, from whom he has won two awards for service to local veterans.

He has also served on the Blount Memorial Hospital’s Nominating Committee, as well as the Veterans Affairs Committee.

McCulley takes the seat of Shawn Carter, who lost the Republican primary in May.

District 1 is located along W Lamar Alexander Parkway and up through downtown Maryville. It includes the Everett Recreation Center, Maryville’s city hall, and the Martin Luther King Kr. Community Center.

Maintaining the seat he was appointed to in 2017, Scott King beat Democratic challenger April White by a double-digit landslide, getting 71.12 percent of the vote.

King could not be reached for a comment Thursday night and did not respond to a voicemail left earlier in the week.

He also did not return a candidate questionnaire to The Daily Times.

King took office in 2017 to replace former Commissioner Steve Samples, who died in office. The vote to appoint King was unanimous.

His tenure so far has been characterized by a low profile, only occasionally offering comments or questions. Prior to 2017, King had no experience in public office.

King owns two King Cleaners laundry services in Knoxville and currently serves as president of the Eagleton Ball Park board of directors.

His opponent, White, had campaigned on helping working families and the Blount County School System.

District 3 is located in north Blount County and encompasses much of Alcoa as well as the East Maryville community of Eagleton Village. It also covers Eagleton Middle School and John Sevier Elementary School.

Republican Brian Robbins, an Iraq and Afghanistan veteran, overwhelmed Democratic challenger Jeff Barbra to maintain the seat he was appointed to earlier this year.

Robbins could not be reached for comment Thursday night and did not return a phone call earlier in the day.

Robbins was appointed in January 2018 to fill the vacancy left by Jerome Moon, who was appointed District 8 state representative.

District 4 is in central Blount County and covers the eastern tip of Maryville running alongside U.S. Highway 321. It includes several schools, including Chilhowee View, Fairview Elementary and Montvale Elementary.

Republican Jared Anderson rides into the seat previously held by Commissioner Dave Bennett on a landslide, with 64.81 percent of the vote.

Following the announcement of election results, Anderson thanked his family, wife, parents and neighbors who put signs in their front yards.

“I campaigned on fiscal responsibility, keeping the overall tax burden reasonably low, and making sure the commission does due diligence,” Anderson said.

The 31-year-old practicing attorney will become the second-youngest member of the commission, after Brian Robbins, who is 29.

In a completed questionnaire for The Daily Times earlier in the year, Anderson emphasized his legal background as experience in building consensus.

Anderson graduated from Maryville High School before attending Vanderbilt University on an academic scholarship. He obtained his law degree from Emory Law School in Atlanta, before moving back to East Tennessee.

Anderson’s law practice in Maryville focuses on state planning and probate for individuals.

In a concession statement, Case said Democrats “made a statement that we are alive and well in Blount County. We ran a good campaign, and I think Jared Anderson will do a good job of representing District 5.”

Jeff Jopling, a 37-year old musician, won on a steady drumbeat of Republican support with 72.79 percent of the vote.

In doing so, Joplin beat his Democratic opponent Kathleen Puckett, who had come to prominence after mobilizing opposition to luxury resort Blackberry Farm’s efforts to rezone more than 5,000 acres on Chilhowee Mountain and in Walland.

Jopling, reached more than two hours after the polls closed, expressed surprise that he had won.

“I don’t even know how that happened,” he said. “This is the only thing I’ve ever done in politics.

“I understand that Kathy, my opponent, has a lot of Democratic supporters. We have a very good relationship. Her voice and the voice of the people who voted for her is definitely not lost on me.”

Jopling ran on a platform of fiscal conservatism, “nonpartisan cooperation,” and pursuing growth “in a sustainable manner,” as he wrote in a completed questionnaire submitted to The Daily Times in March.

The issue of growth is particularly sensitive in District 8, which contains the less-developed edge of the national park that is often called the “peaceful side of the Smokies.”

Jopling also campaigned as a political outsider who could lend a fresh perspective to the commission.

Jopling also benefited from long ties to the area, in contrast to Puckett, who moved to Tennessee in 2010.

Puckett, who gave her concession speech at the Democrat’s viewing party at Barley’s in Maryville, told The Daily Times, “Jeff is a good man, we’ll be in a good hands.”

“This race has been exhilarating. I created change without even having to be elected,” she said, referring to the commission’s vote on the Blackberry rezoning.

Jopling has run a wedding venue with his mother for the past seven years. He also performs as the front man in The Jeff Jopling Band, a contemporary country rock outfit.

District 8 covers the entirety of eastern Blount County, encompassing the communities of Walland, Oak View and Townsend, as well as Heritage Middle School.

Check your email for details.

Submitting this form below will send a message to your email with a link to change your password.

An email message containing instructions on how to reset your password has been sent to the e-mail address listed on your account.

Your purchase was successful, and you are now logged in.

A receipt was sent to your email.