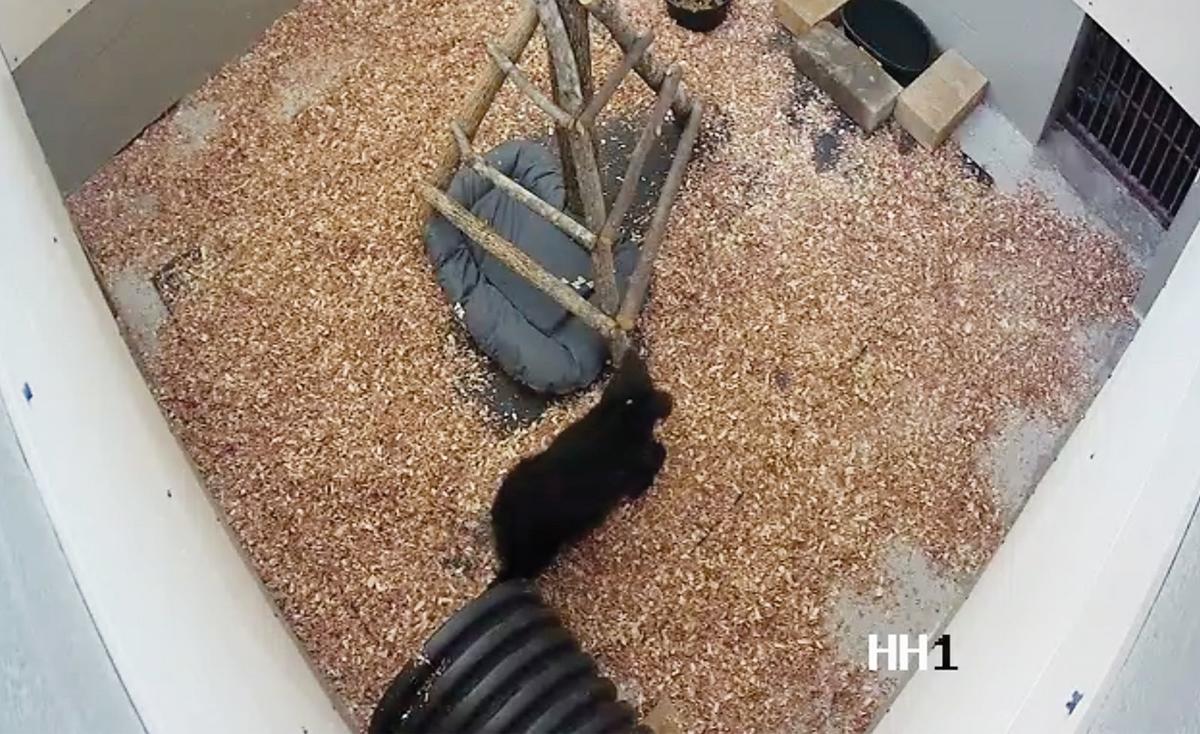 Balthazar came through the gate just before 1 p.m. Thursday at Appalachian Bear Rescue in Townsend. He made the journey from Louisiana and weighs only 17 pounds. 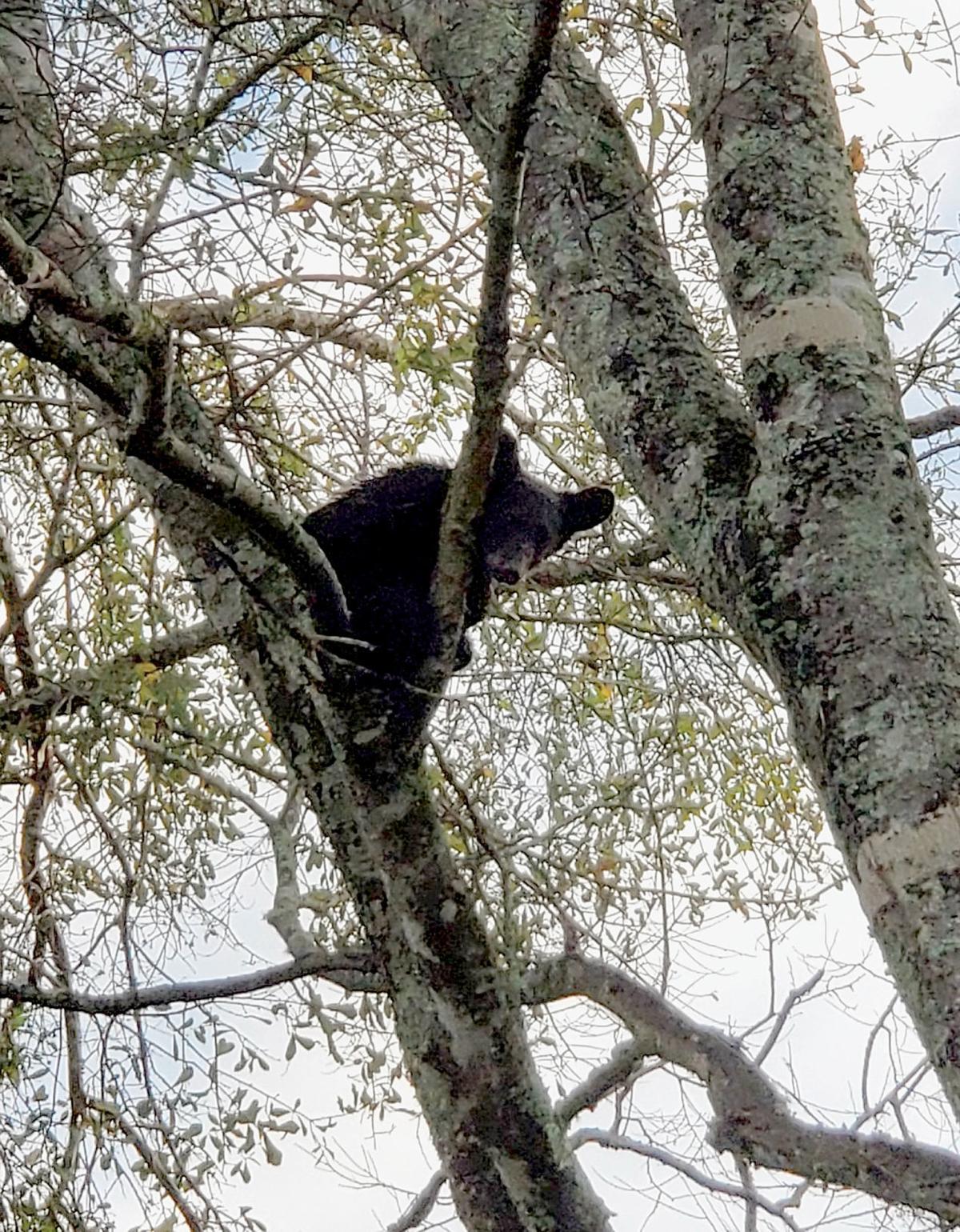 Balthazar, 1, nicknamed King B., was rescued in Louisiana. He had been separated from his mother and was struggling to survive on his own. 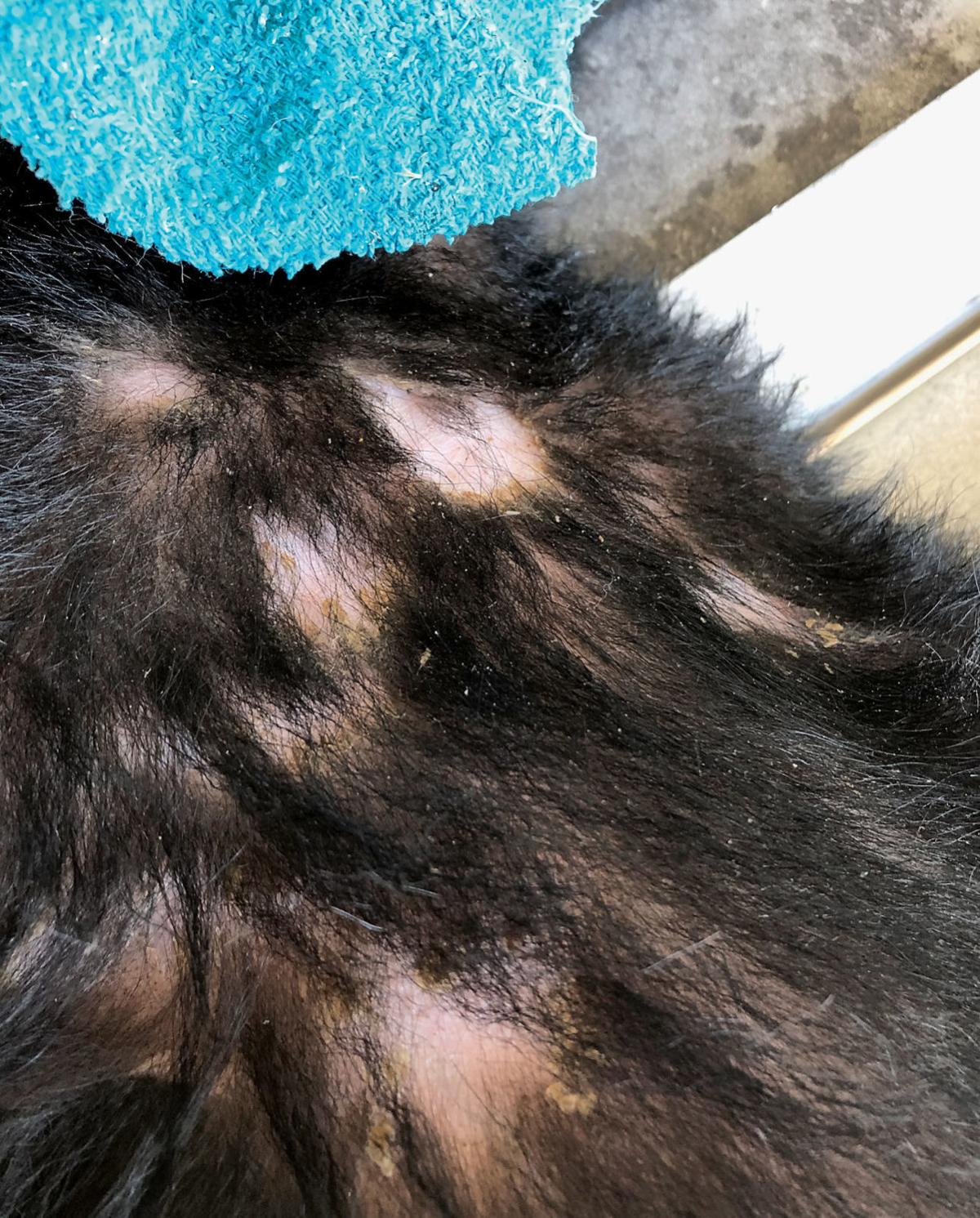 Black bear Balthazar, nicknamed King B., had parasites and was missing some fur when he was rescued from the wild in Louisiana and brought to Appalachian Bear Rescue in Townsend. He was starving. 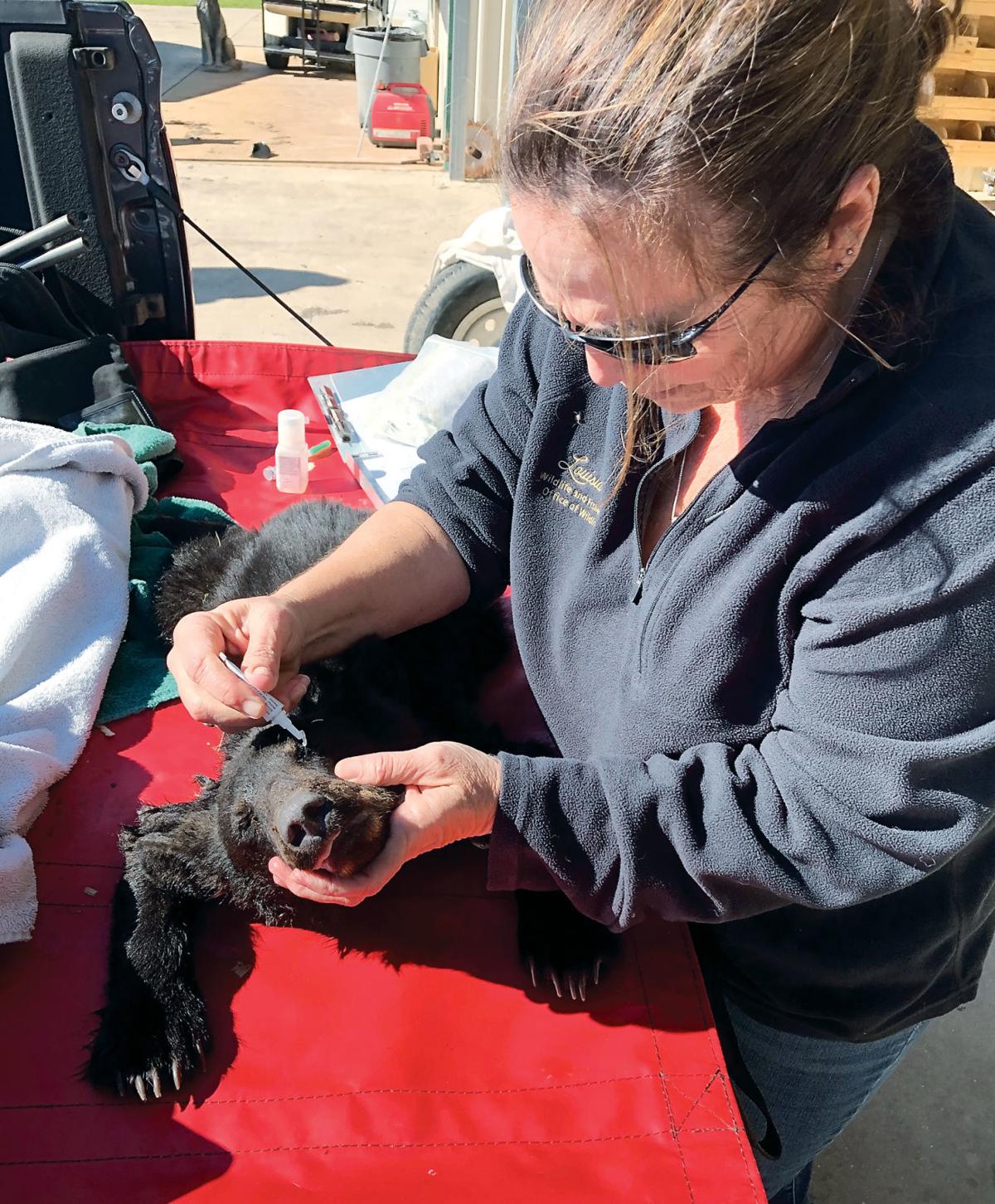 Maria Davidson with the Louisiana Department of Wildlife and Fisheries applies eyedrops to Balthazar, nicknamed King B., after it was rescued in Louisiana.

Balthazar came through the gate just before 1 p.m. Thursday at Appalachian Bear Rescue in Townsend. He made the journey from Louisiana and weighs only 17 pounds.

Balthazar, 1, nicknamed King B., was rescued in Louisiana. He had been separated from his mother and was struggling to survive on his own.

Black bear Balthazar, nicknamed King B., had parasites and was missing some fur when he was rescued from the wild in Louisiana and brought to Appalachian Bear Rescue in Townsend. He was starving.

Maria Davidson with the Louisiana Department of Wildlife and Fisheries applies eyedrops to Balthazar, nicknamed King B., after it was rescued in Louisiana.

Appalachian Bear Rescue in Townsend has stepped into high gear this week after a third bear from Louisiana arrived at the rehabilitation center, this one starving and in poor condition.

Balthazar was trapped in a coastal area of Louisiana after he was spotted scavenging for food in trash cans in a residential area, said Dana Dodd, ABR executive director. She said the bear, which will be a year old later this month, weighs only 17 pounds instead of the typical 40-50 for his age. His nickname is King B.

“He should be in a den with his mother bear and weigh 40-50 pounds, but something happened to separate him from his mother,” Dodd explained. “Apparently, he hasn’t been making it very well since.”

ABR already is caring for two other Louisiana coastal black bears, Beignet and Boudreaux. Those two were brought to ABR on March 1 after their den flooded and no mother bear was spotted. They weighed only 2 pounds when they arrived at the center and are still there.

Louisiana and Tennessee wildlife officials agreed that Beignet and Boudreaux could spend the winter in hibernation at ABR and then be returned to the wild in spring, back to Louisiana.

ABR takes in injured, orphaned or sick black bears and provides medical attention to bring them back to health so they may be given a second chance in the wild. The cubs and yearlings receive care from the University of Tennessee College of Veterinary Medicine.

To date, this nonprofit facility has cared for 299 young bears. In July of this year, it will celebrate its 24th anniversary.

This newest bear was spotted before Christmas in a residential neighborhood and attempts were made to capture him, but he was elusive. The traps were reset after Christmas and the bear was caught last weekend.

Louisiana officials have provided medical attention, including medication to rid him of parasites.

Those parasites were stripping away all of the nutrition from food he has been able to find, Dodd said.

“His fur coat is in poor condition, and he has no body fat to get him through the winter,” she said. “He was surviving on any food he could find, even though that food came from very bad places like human trash.”

While ABR has been caring for bears like this one and Hartley, a starving bear from Kentucky, Dodd said this area has been lucky that soft and hard mast crops were strong. “So far, we haven’t seen starving bears and other starving wildlife,” she said. Harley and King B got in the condition they did because they got separated from their mothers and struggled alone.

Getting a heads up

ABR curators have known for a while they would be receiving King B. They have been scrambling to make repairs and improvements to the outdoor enclosures. They also are working on repairs to the resting platforms after previous bears ripped off planks on the culvert dens and bark from the platforms.

Because of the added cost of caring for another sick bear over winter, ABR will host a Mardi Gras party in February. Details will be made available soon.

Townsend Cades Cove Gateway Alliance is giving ABR all of its unsold Christmas trees to be used to make brush piles in the enclosures. King B will get one, too, Dodd said.

Dodd reminds eveyone to contact wildlife officials if they see an injured or orphaned wild animal. In East Tennessee, people should call the Tennessee Wildlife Resources Agency at 800-831-1174.

Not all cubs that are alone have been orphaned, Dodd explained. Mom may be nearby but anxious about coming near people to rescue her cub. A call to wildlife officials should be made so they can come watch for the mother bear.

Being good stewards of our environment will only increase the chances of survival for these wild animals, she said.

“On our very best day, we are a poor replacement for a mother bear,” Dodd said. “We must all be very careful never to accidentally orphan a young bear or other young wildlife. We are here for bears and wildlife agencies that need our assistance.”