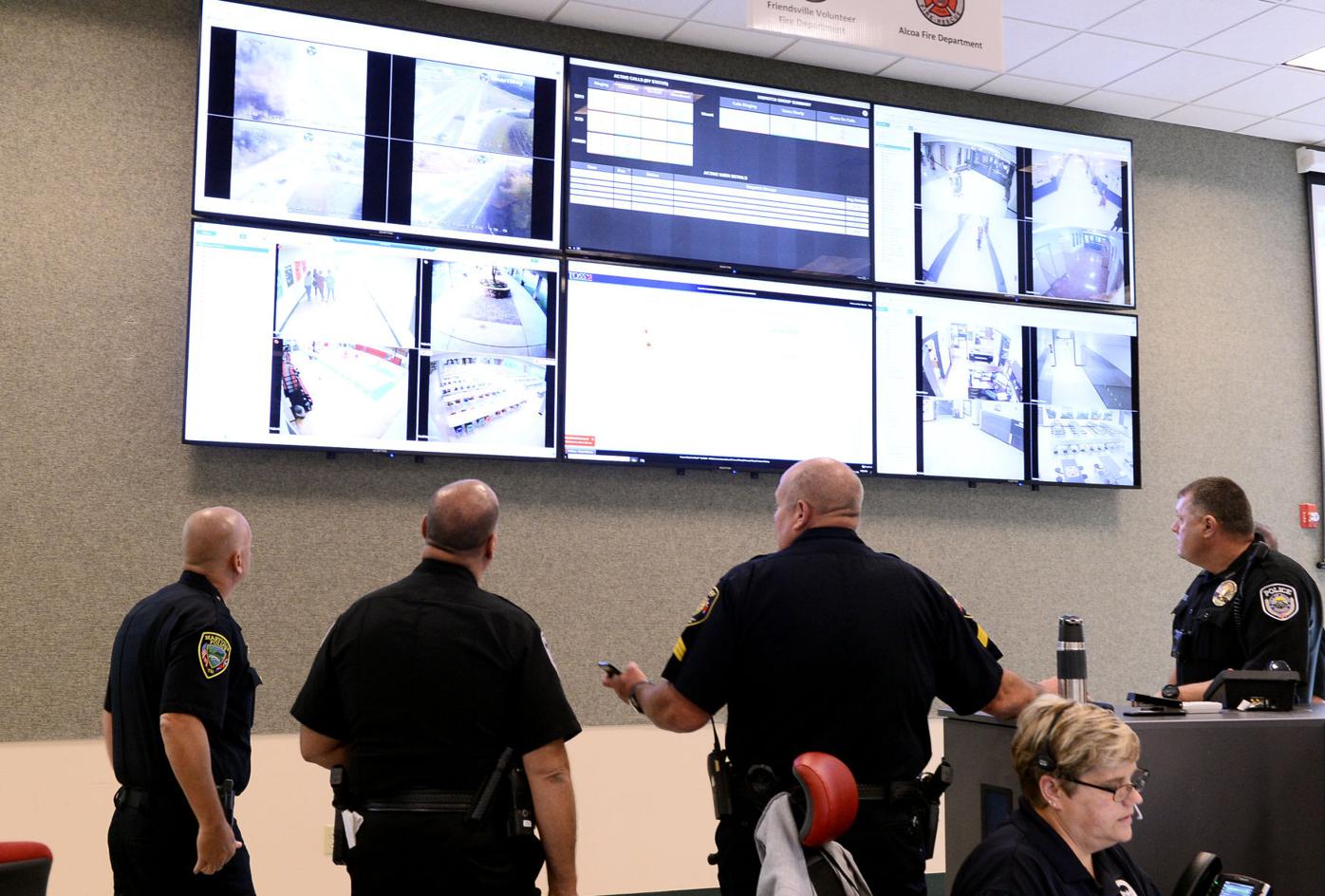 In this 2018 file photo, Sgt. Jeff Hicks (center), then supervisor of the Blount County Sheriff’s Office school resource officers, shows SROs from Alcoa and Maryville a dashboard for school emergency operations plans during a demonstration at the Blount County E-911 Communications Center, which can call up live views from school cameras. 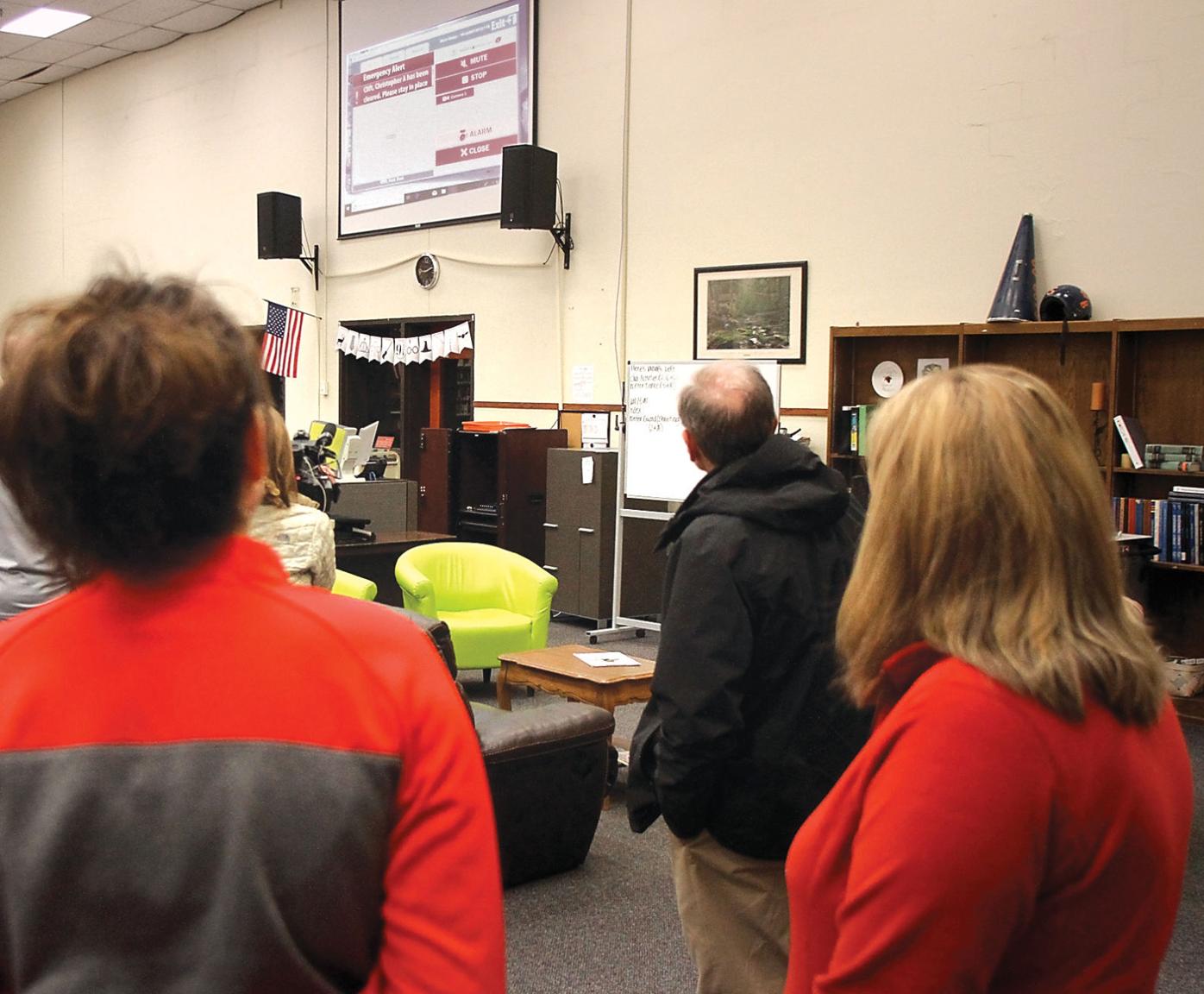 Blount County Schools administrators and school resource officers see the type of messages that will be sent out through the SARA (Situational Awareness and Response Assistant) system deployed in 2020 during a demonstration that January at William Blount High School. When a staff member pushes a button, the system can display the type of alert, who triggered it and provide live views from the nearest cameras.

In this 2018 file photo, Sgt. Jeff Hicks (center), then supervisor of the Blount County Sheriff’s Office school resource officers, shows SROs from Alcoa and Maryville a dashboard for school emergency operations plans during a demonstration at the Blount County E-911 Communications Center, which can call up live views from school cameras.

Blount County Schools administrators and school resource officers see the type of messages that will be sent out through the SARA (Situational Awareness and Response Assistant) system deployed in 2020 during a demonstration that January at William Blount High School. When a staff member pushes a button, the system can display the type of alert, who triggered it and provide live views from the nearest cameras.

Even with a law enforcement officer on most campuses and cameras that can send live images to the Blount County E-911 Communications Center, local schools aren’t crime free.

In addition to thefts, vandalism and drugs, crimes on campus in recent years have included aggravated assault, “forcible fondling” and extortion.

In 2019, 80 school crime offenses in Blount County resulted in an arrest, according to the Tennessee Bureau of Investigation.

TBI publishes an annual statewide school crime study based on information law enforcement agencies are required to submit through the Tennessee Incident Based Reporting System.

The Daily Times requested from TBI information specific to Blount County, and received data based on reports from the Blount County Sheriff’s Office, Maryville Police Department, Alcoa Police Department and Fifth Judicial Drug Task Force for 2018-20. With students and staff on campus fewer days in 2020 because of the COVID-19 pandemic, the numbers are lower for that calendar year.

The newspaper requested further information from the agencies and public school districts, and this article is the first in a three-part series. Monday’s article will look at Maryville City Schools and Tuesday’s at Alcoa City Schools.

The numbers require more detail to provide an accurate picture.

One BCSO arrest was reported twice in 2019, so that makes the total across all agencies in the county 79.

A weapons law violation reported in the 2020 school crime data occurred on Election Day, when school was not in session. A man posted a picture of himself holding a pistol with an “I Voted” sticker on it in the parking lot of Townsend Elementary School, a polling location.

BCSO said school security footage showed the man did not enter the school with the gun or point it at anyone, and the district attorney’s office declined to prosecute him.

After correcting the errors, BCSO reported 164 crimes on school campuses in 128 incidents during 2019.

One incident with two crimes was at the private Maryville Christian School, with the others spread across 15 of the 21 Blount County Schools campuses. Six of the elementary schools had no reports.

While some parents have claimed Heritage Middle School has a fight culture, it had only three school crime reports in 2019, the same number as Union Grove Middle.

Blount County Schools declined a request for an in-person or phone interview regarding the school crime reports and required questions to be submitted by email.

The response from Amanda Vance, supervisor of elementary instruction and district communications, did not address several specific questions. For example, she did not respond to questions about the relatively high numbers for CES and CMS.

“Our principals work in collaboration with SRO’s to ensure we provide the safest school environment possible,” she wrote.

In response to questions about the time and location of a 2018 rape report at William Blount, she wrote that the district attorney’s office “would not prosecute the case due to ‘no evidence to support prosecution in the matter.’”

Vance did not address specific questions about six school employees and a contractor who were victims of assault.

“This overall report is a record of the alleged crimes reported to and/or by the SRO’s, however, it does not clearly and distinctly report the outcome of the investigations and/or court decisions. This report can be misleading without all the facts and context of each incident and report,” Vance wrote.

In clarifying its 2019 school crime data, BCSO explained one incident was inadvertently reported as a school crime because it was reported to an SRO but did not occur on campus.

“In terms of the school response, our principals investigate all reported incidents and alleged offenses on our campuses. They follow our BOE (board of education) policies for student code of conduct and appropriate action is taken to ensure the safety and well-being of our students and staff.

“Our top priority is providing a safe and healthy learning environment for all students and staff. We are proud of our administrators and the BCSO SRO’s who serve our school community and provide safe schools for our students and staff,” Vance’s email reply said.

In 2019, BCSO reported 68 school crime offenses “cleared by arrest,” which could mean the person was taken into custody or received a citation.

Nineteen were for drug or narcotics violations.

A 14-year-old was charged with extortion or blackmail, and a 15-year-old with fraud/impersonation.

The largest numbers of school crime offenses BCSO reported in 2019 were the 53 involving simple assault and 40 for intimidation.

Threatening to fight someone after school could be considered a crime of intimidation if the threat was reasonably believed to be credible, according to BCSO.

Twenty-seven offenses were for drugs, mostly marijuana. That includes 11 reports for marijuana at William Blount, four at Heritage, four at Everett, two at Eagleton Middle School and one at Carpenters Middle School.

One case listed in the school crime reports involved an adult woman who walked through the back of the EMS campus and was stopped by the SRO, who found she had heroin, BCSO said.

The sheriff’s office, in coordination with BCS administration, sometimes takes dogs trained in narcotics detection into the schools.

BCSO reported four cases of “pornographic/obscene material” in 2019, all students accused of distributing photos via online apps such as AirDrop, Snapchat, TikTok and Likee. Those cases were handled through juvenile court.

In 2019, a 10-year-old threatened another student with a pocket knife. “Due to his age, and with the consent of the guardian of the victim, the school handled all discipline,” BCSO said.

In 2020 when a student younger than 10 brought a pocket knife to school in a backpack and showed it to another student, that was reported as a weapons law violation. The district attorney’s office opted not to bring a criminal charge against the youngster, and the school handled discipline for the incident, BCSO said.

Six school employees were victims of simple assault, according to BCSO, as well as a bus driver and three adult visitors to a school campus.

BCSO reported 16 offenders younger than 10 in 2019, seven involving assault, seven intimidation, one forcible fondling and one for destruction, damage or vandalism.

Among the 18 alleged offenders over the age of 18, eight were school employees, seven for simple assault and one for forcible fondling, but BCSO said none faced criminal charges.

Seven of the other alleged offenders over 18 weren’t students or employees. BCSO said those included adults attending nighttime athletic events and “unknown cybercrime offenders believed to be nonstudent adults.”

A William Blount student was arrested on an arson charge in 2019, BCSO said, because he set fire in a bathroom trash can.

In another 2019 case, a student was arrested and charged with extortion/blackmail after threatening to send naked photos of another student to others if she did not continue their relationship. That situation also showed up in the reports as a pornography/obscene material incident.