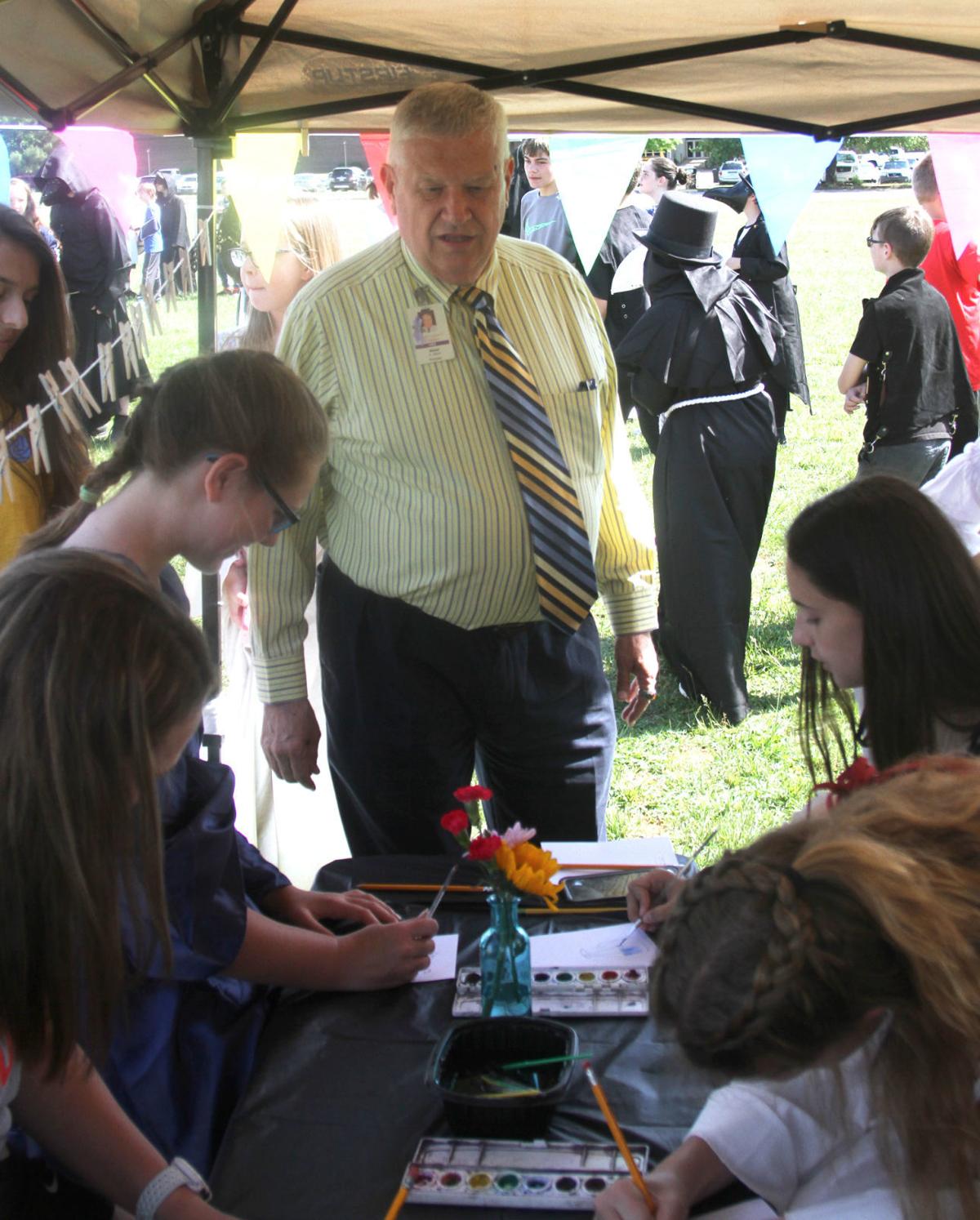 Principal Steve Moser talks with Heritage Middle School students during a Renaissance Fair in May. Moser is retirng as HMS principal after 41 years with Blount County Schools. 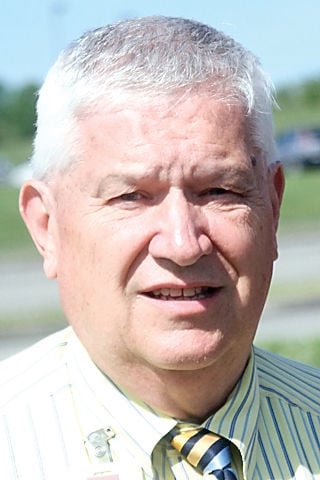 Steve Moser has been a teacher, principal and superintendent during his 41 years with Blount County Schools.

Steve Moser describes himself as a goal setter, and when starting his career in education, planned to spend 10 years in the classroom, building-level administration and 10 years in the central office. In 41 years with Blount County Schools, he exceeded all of those and retired this month as principal of Heritage Middle School.

Moser was a substitute teacher at Heritage High School when it opened in 1977 and was hired full time to teach a special education class at Everett Special Education Center in March 1978, as schools were implementing federal special education regulations.

The comprehensive development classroom had a dozen students, many with multiple disabilities. Moser recalls one point during the first year when he didn’t think he could handle a particular student any longer.

“The principal said, ‘He will not always be 14 years old. He will be fixing your car. He’ll be plumbing your house. He’ll be a productive member of society,’” Moser recalled.

As his role changed, Moser’s perspective changed over the years from one classroom to the entire district. “You look at the scope of all the kids who need our care, our love and our service. It’s been a transformation,” Moser said.

After more than four decades, Moser said that he still loves kids.

He and his wife, Joy, have devoted their time to helping children. “I’m a surrogate papaw and dad to many but biological father of none,” Moser said.

His advice to educators: “Don’t just make a difference. Make a positive difference in the lives of kids and adults.”

Although he is retiring from full-time work, Moser still plans to continue playing some type of role supporting the schools.

“I’m an ambassador for Blount County Schools and public education,” said Moser, who graduated from Lenoir City High School but spent his entire career in BCS.

His bachelor’s degree from Lee University was in secondary education. While with BCS he earned a master’s degree in curriculum and instruction, took additional courses on elementary education and earned his doctorate in educational leadership, all from the University of Tennessee.

From 1978-84 he taught at Eagleton Middle School, followed by six years at William Blount High School, also coaching basketball and football. He was assistant principal at William Blount for four years before running for superintendent.

Moser said he had an interest in someone running for superintendent of schools but the others he would have endorsed decided not to run. “I was young and dumb,” Moser said. “There wasn’t many people that gave me a chance, but I went door to door throughout this county.”

He won one term before the responsibility for selecting the director of schools moved from the voters to the school board. “After my four years was up I couldn’t get four votes of the seven,” he said. “I could get 23,000 votes in Blount County, but I couldn’t get four on the board.”

Moser spent a dozen years as coordinator of the district’s alternative program, and since 2010 has been principal at Heritage Middle School.

“As a principal you want to ensure that all is well, academic-wise and safety-wise,” Moser said. “Sometimes you make decisions that may seem detrimental to one kid or one family, but it helps the other 813 kids you’ve got and their families.”

“You get criticized,” he said. “You get your integrity used against you.” A parent might ask him, “I thought you were a Christian. Why are you suspending my daughter?”

Moser also noted that his approach to school leadership has changed over the years.

“You learn to make good judgments as the result of making poor judgments,” he said. “I try to keep an open mind and remain flexible.”

“If a kid brings a pack of cigarettes today, I don’t have to say, ‘You’re suspended tomorrow,’” he said. “I like to mull a little bit or think and talk to the guardian.” While in the past he was quick to make decisions, he learned to respond and not just react.

“I don’t yell at kids. I get stern with them, and they know that I care about them,” he said. “They may not think that I love them sometimes, but I do.”

Over the past 41 years many things have changed in education, from funding to discipline. Moser said kids have stayed much the same, “but their temptations have increased and expanded.”

Family lives have changed, and instead of parents Moser may be talking with a grandparent, aunt, big brother or sister, or other guardian raising a child. Families today also are less likely to be taking the children to church, he said. Issues have affected society, the country and the county.

“Maryville has always been Mayberry, but it’s not Mayberry anymore,” Moser said of the fictional town in “The Andy Griffith Show” of the 1960s.

The rules have changed too. Moser recalls that in the early 1990s a student brought a “Crocodile Dundee” size knife to William Blount, and he called the mother to pick it up. With a zero-tolerance policy just a couple years later, a pocketknife would automatically result in a one-year suspension.

“I didn’t even know what the word ‘politically correct’ was until we coined it here in America,” he said.

While he used to open every year with prayer, Moser said, “You don’t have to hit people over the head with a Bible. Good principals are good Bible people. There’s no rules against being nice or kind, treat others as you want to be treated.”

Shortly after Moser became the third principal at HMS they coined the term “Mustang Magic,” and anyone who has heard Moser speak has heard him proclaim it “the best middle school on the planet.”

“I kept preaching it,” he said. “We may not have shown it in different areas, test scores or whatever, but in my heart I bought into it, and I believe this is the best middle school on the planet.”

When everything else is equal, he said enthusiasm and relationships make a difference.

He also cites “five pillars” for Mustang Magic, academics, arts, athletics, attendance and behavior. For example, when athletic teams are doing well there is more school pride, he said, and attendance goes hand in hand with academic performance. “This is a be-there experience,” he said. “I don’t want you to miss a thing.”

The coming school year will be the 20th for HMS, and its new principal is one of four remaining staff members who have been there from the beginning.

“I could not be prouder of Amber Annette Albright Williams,” said Moser, who has known her and her family since she was a student. “Nobody loves Heritage Middle School more than Amber Williams,” he said. “She is a Mustang for life.”

Williams has been the assistant principal for the past decade, and that role will be filled by Jared Smith, who served as a second assistant at HMS before becoming principal of Porter Elementary. (See related story on 2A of today’s edition.)

“It’s a great team with great enthusiasm, and fresh air will be pumped back into the Mustang Magic,” Moser said. “I’m not saying the enthusiasm has waned, but it will be different.”

Moser isn’t ready for a rocking chair and plans to continue supporting the schools in some role. “I don’t know where, when or what capacity, but I’ll be there,” he said.

"Mo" is a good man. Proud to have voted for him when he ran for Superintendent. I wish him the best in his retirement!