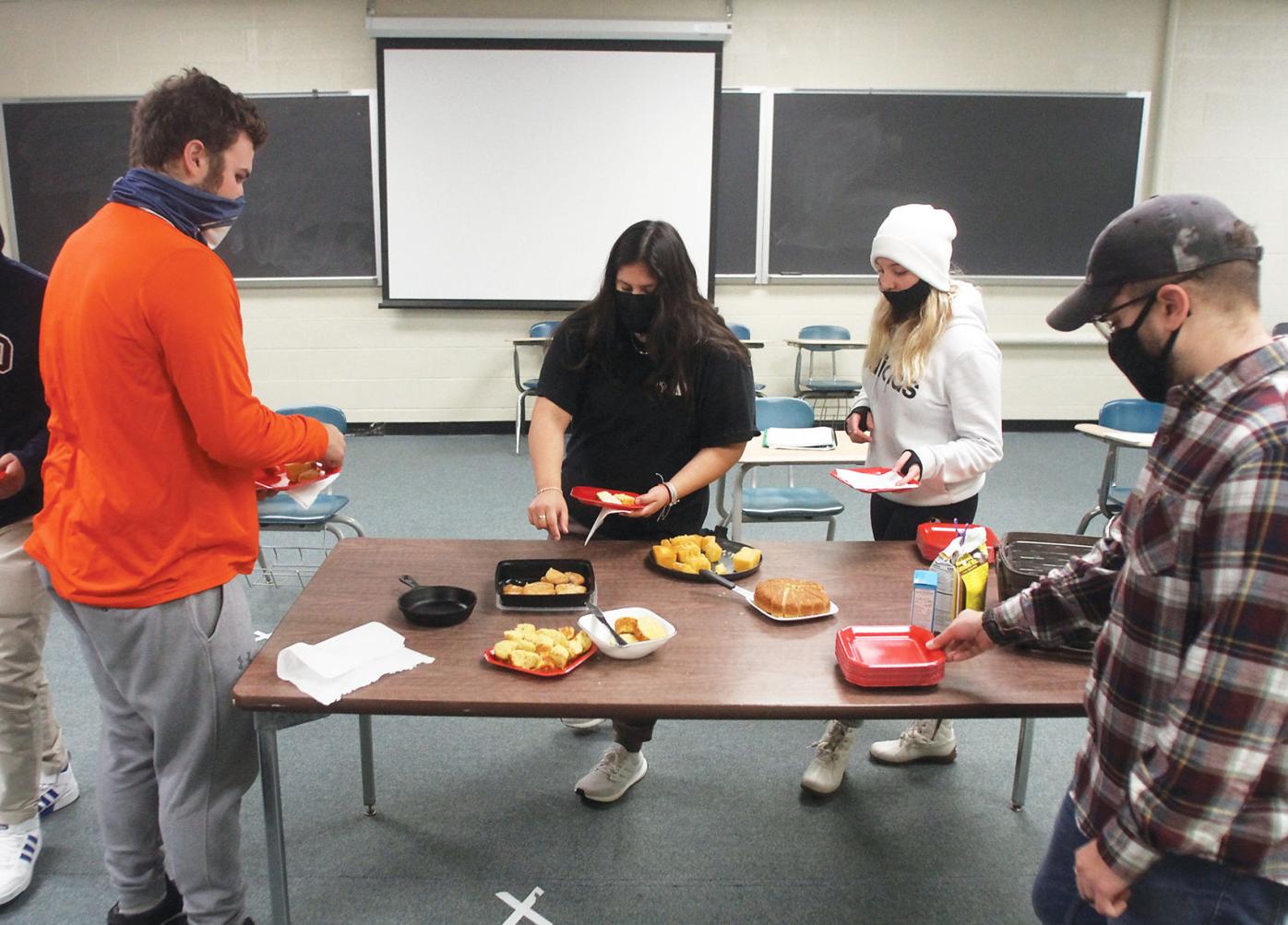 Maryville College students pick up samples of cornbread on Monday to discuss the differences during a first-year seminar titled “Butter My Biscuits: An Exploration of Southern Food.” They talked about the history of different styles and factors that influenced how families make the dish. 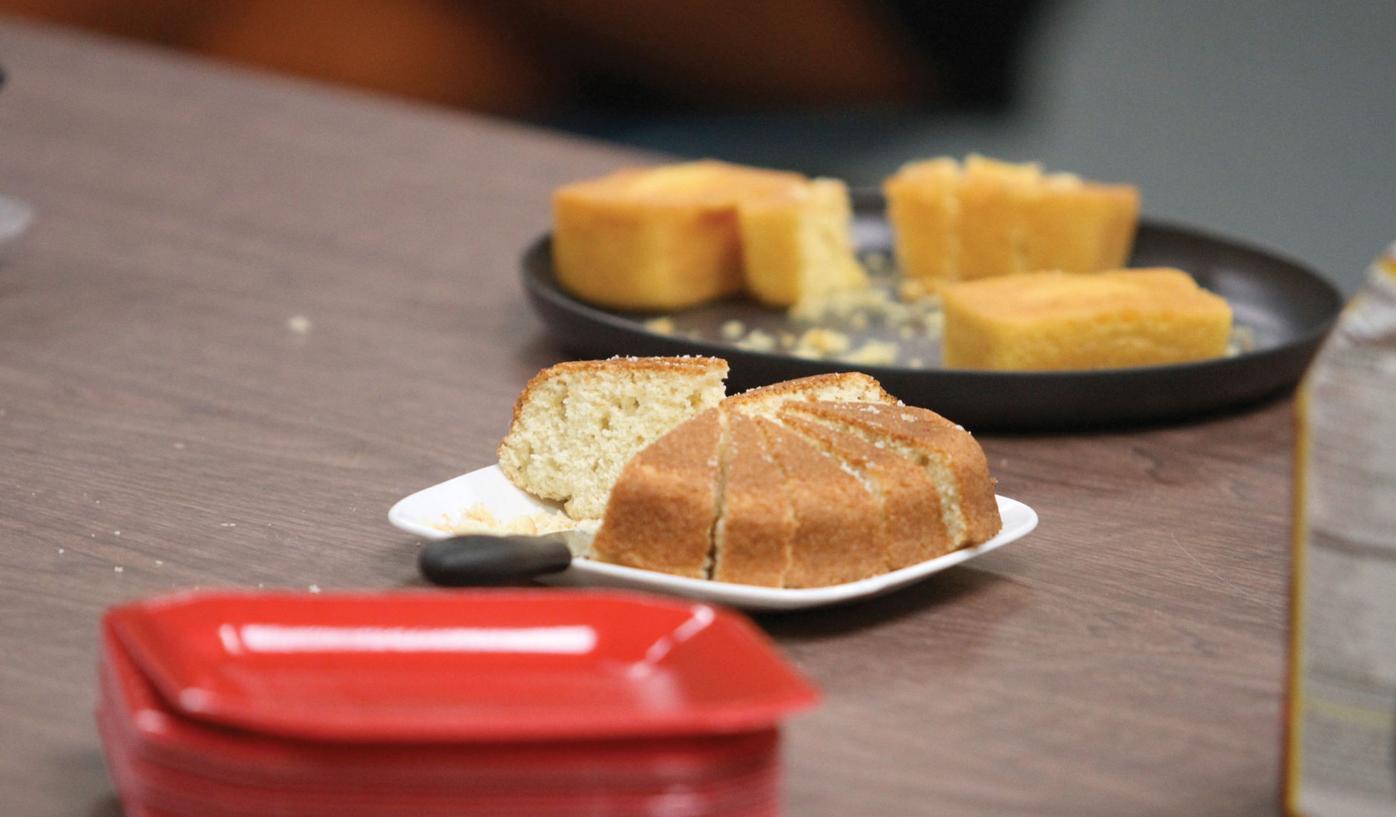 Assistant professor Kristin Riggsbee lead a discussion on cornbread Monday, Nov. 22, as part of a first year seminar at Maryville College. She explained how a pone is turned out of a cast iron skillet with the crispy side on top. 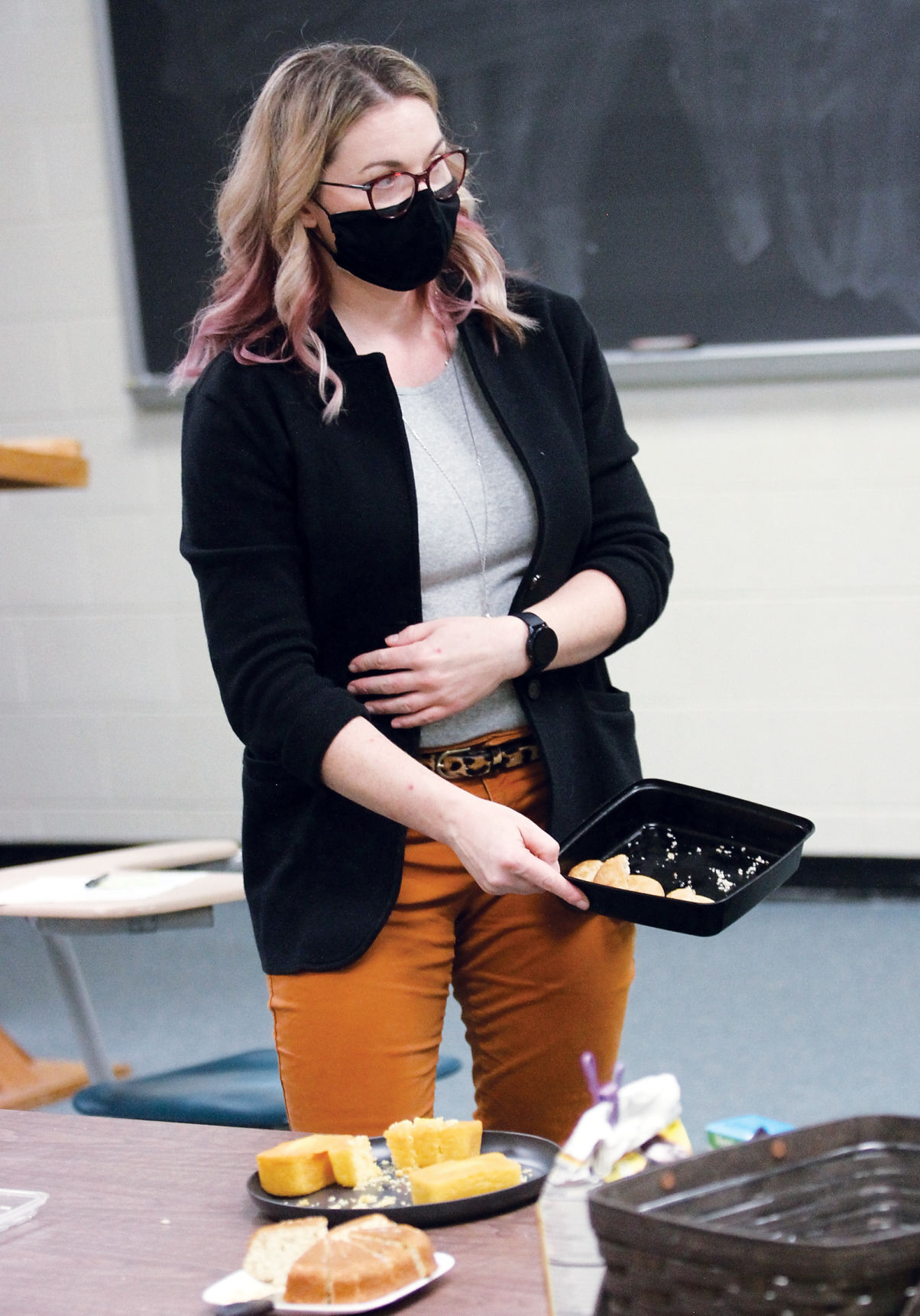 Maryville College assistant professor Kristin Riggsbee asks students to talk about the different ways to make cornbread during a discussion Monday, Nov. 22, as part of a first-year seminar centered on Southern foods. 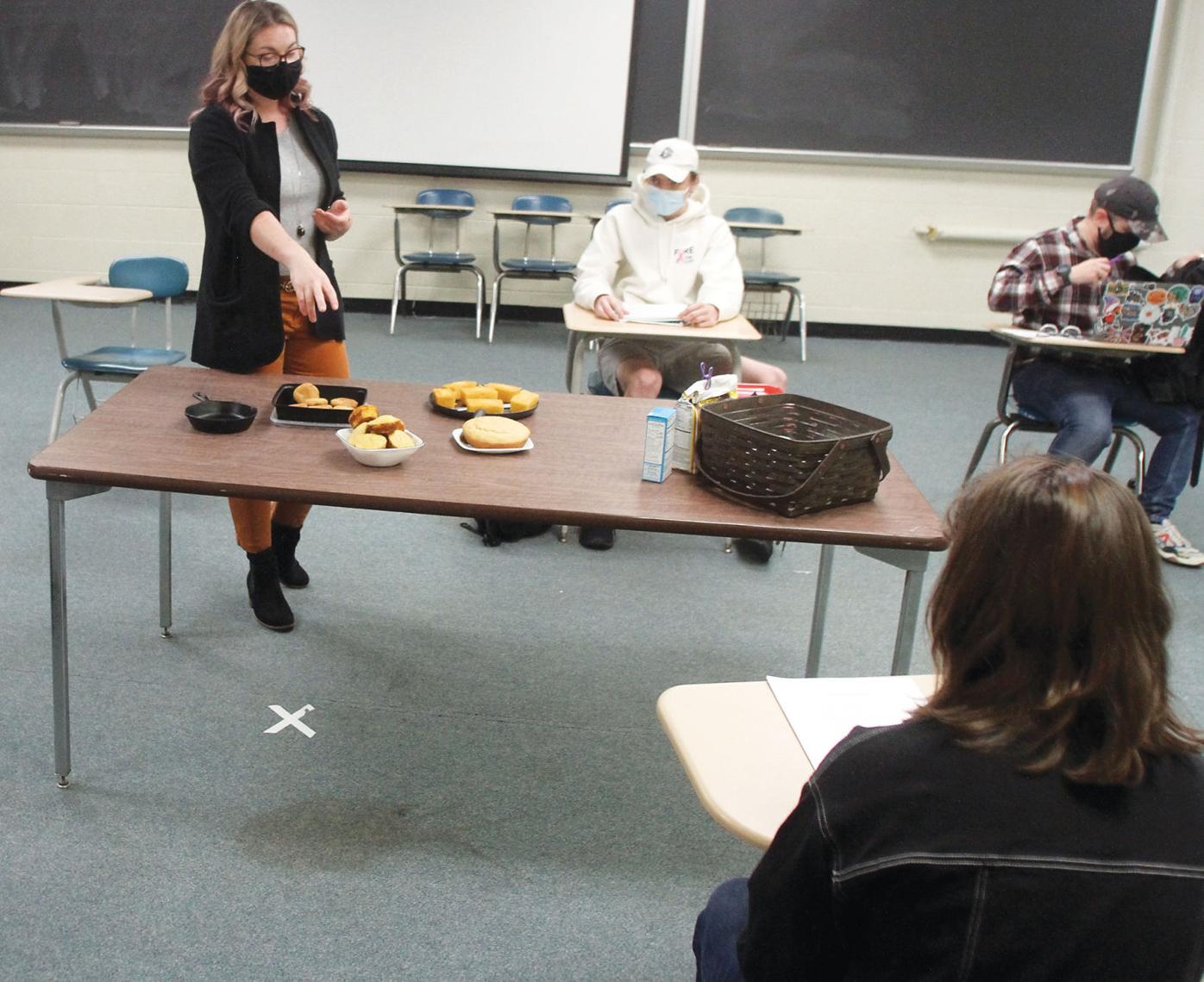 Maryville College students pick up samples of cornbread on Monday to discuss the differences during a first-year seminar titled “Butter My Biscuits: An Exploration of Southern Food.” They talked about the history of different styles and factors that influenced how families make the dish.

Assistant professor Kristin Riggsbee lead a discussion on cornbread Monday, Nov. 22, as part of a first year seminar at Maryville College. She explained how a pone is turned out of a cast iron skillet with the crispy side on top.

Maryville College assistant professor Kristin Riggsbee asks students to talk about the different ways to make cornbread during a discussion Monday, Nov. 22, as part of a first-year seminar centered on Southern foods.

If you crave a meaty discussion over the Thanksgiving table, skip canned versus fresh cranberry sauce or dressing versus stuffing. Cornbread is a topic people can really dig into.

Maryville College freshmen proved that Monday, Nov. 22, with a discussion in the first-year seminar titled “Butter My Biscuits: An Exploration of Southern Food.”

A couple of the teens had never tasted cornbread before the samples assistant professor Kristen Riggsbee served, and about half grew up with sweet cornbread on their family dinner table.

After sampling the sweet version for the first time, however, Walker Settles declared, “I would never eat that again.”

Articles, videos and podcasts assigned earlier gave the students background for a wide-ranging discussion over the next half hour, covering ground such as how the corn plant was domesticated — “natural GMO stuff,” the professor noted — the change the Industrial Revolution brought to milling, the addition of different ingredients and multiple cooking styles.

“It’s a multicultural practice, and it was here with the indigenous people,” Riggsbee noted.

She told the students the British initially thought the North American maize was inedible. “It took indigenous people and other cultures showing us how to actually utilize corn, and it has become what it is today,” she said.

Initially made with a paste of simply cornmeal and hot water, cornbread developed into different recipes including eggs, buttermilk, baking powder and sugar. She even brought a “Mexican-style” cornbread made with jalapenos and cheese to Monday’s class, noting that it was only a Southern variation, not the true dish.

Ale Blanco, whose family comes from Colombia, offered an even wider perspective on cornbread, discussing the many ways to prepare arepa, a South American cornmeal cake.

As students prepared for the class, they learned more about their own families, how one great-grandpa had milled corn, and another’s grandmother in Michigan learned to make cornbread from indigenous people when she lived in New Mexico.

“People feel very passionate about this particular cornmeal mix,” Riggsbee told her students as she held up a bag of Three Rivers cornmeal. “It was off the market for nearly a decade in the early 2000s.”

“People will fight each other at Food City to get this cornmeal mix,” she said.

The first-year seminar is designed to expose students to new ideas and prepare them to hold discussions.

An assistant professor of health and wellness promotion who reads cookbooks like novels, Riggsbee knows cornbread is a rich topic with deep beliefs from many students’ own roots.

“They don’t realize they each have passionate feelings about this is how my grandmother made it, and this is how it should be, and I can’t believe you eat it that way, why would you?” she explained during a prior interview.

“We learn so much from people and who they are, based on food,” she said.

While Riggsbee grew up in the South, her parents are from Michigan. On the rare occasions they served cornbread, she said, “it was yellow and sweet out of a box more like a Duncan Hines cake.”

“Some of the things with Southern food culture are just foreign to me,” Riggsbee conceded.

The first time her husband’s grandmother said she was going to make a pone of cornbread, Riggsbee asked how to spell the word, because she had no idea what a pone was.

The grandmother taught her how to use White Lily self-rising white cornmeal mix poured into a screaming hot, greased skillet to produce a crisp crust. “I’m pretty passionate about those crispy edges,” Riggsbee said.

On Monday she used the pone pan Granny gave her to show students how to flip the cornbread onto a serving platter with the crispy underside on top.

Riggsbee said, “I have gotten fairly close to Granny’s cornbread,” but she knows the food isn’t just about the flavor; it’s about family stories and memories in the kitchen too.

Last year was the first time she taught “A Taste of the South” as a first-year seminar. Because of COVID-19 precautions, she arranged for students to have small outdoor picnics to discuss topics including pimento cheese and barbecue.

Through food, the students not only get to know each other but also can explore a wide variety of topics, including history, geographical differences, cultural significance and nutritional implications.

They talked about academic integrity when they discussed how recipes developed by enslaved people were written down by plantation owners, making it difficult to credit the person who originated a recipe.

“The best part of my job is getting to talk to people about food all day,” Riggsbee said.

The discussion this week even led some students to ponder wider questions, such as whether hush puppies and tortillas are cornbread.

As the discussion was wrapping up, the professor told them, “It’s not meant to be an easy answer. It’s meant to be a way for us to look at our own families and our own cultures and say, “This is who I am, but it’s OK that Elvin eats sweet cornbread and Eli likes this Mexican cornbread.”

“It’s a cultural piece of who we are,” she added.

She encouraged the teens to continue the discussion with their families. “There’s no better time than Thanksgiving and this holiday to think about food and how it connects us,” she said.

As the students prepared to leave the classroom, Riggsbee’s comment that she needed to bake cornbread on Tuesday so it would dry out for her Thanksgiving dressing drew a critical question of why from Allen Brooks, who obviously disagreed with the practice.

“That way it absorbs the yumminess. Call your mom,” she said with a smile.

“I make the dressing,” he loudly informed her.

“I still love you, but we’ll call it a difference of opinion,” Riggsbee said.