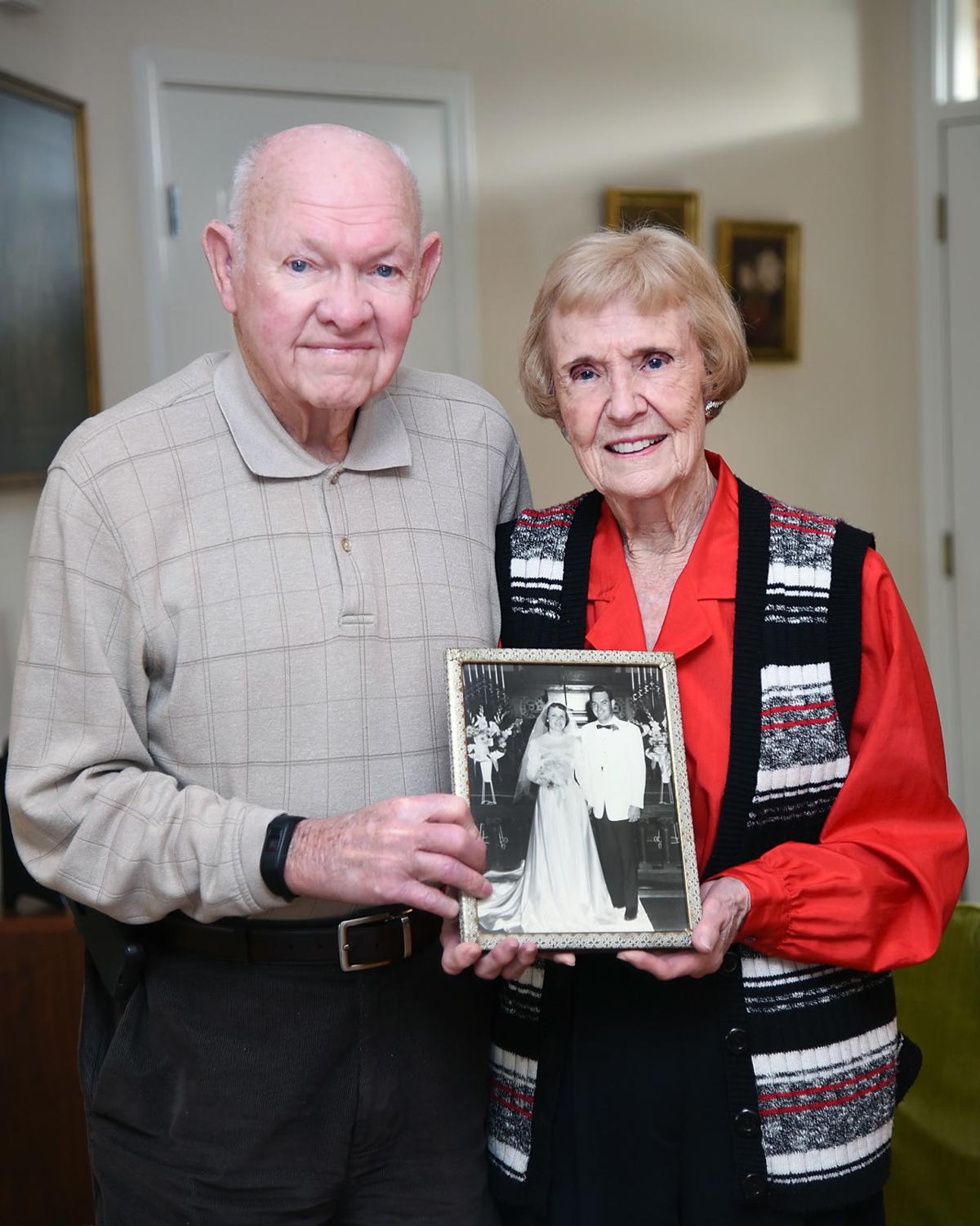 Nick (left) and Martha Cotter show their wedding photo in their living room at Asbury Place. He was drafted by the U.S. military just six months after they were married, in 1955. They wrote letters to each other every day. 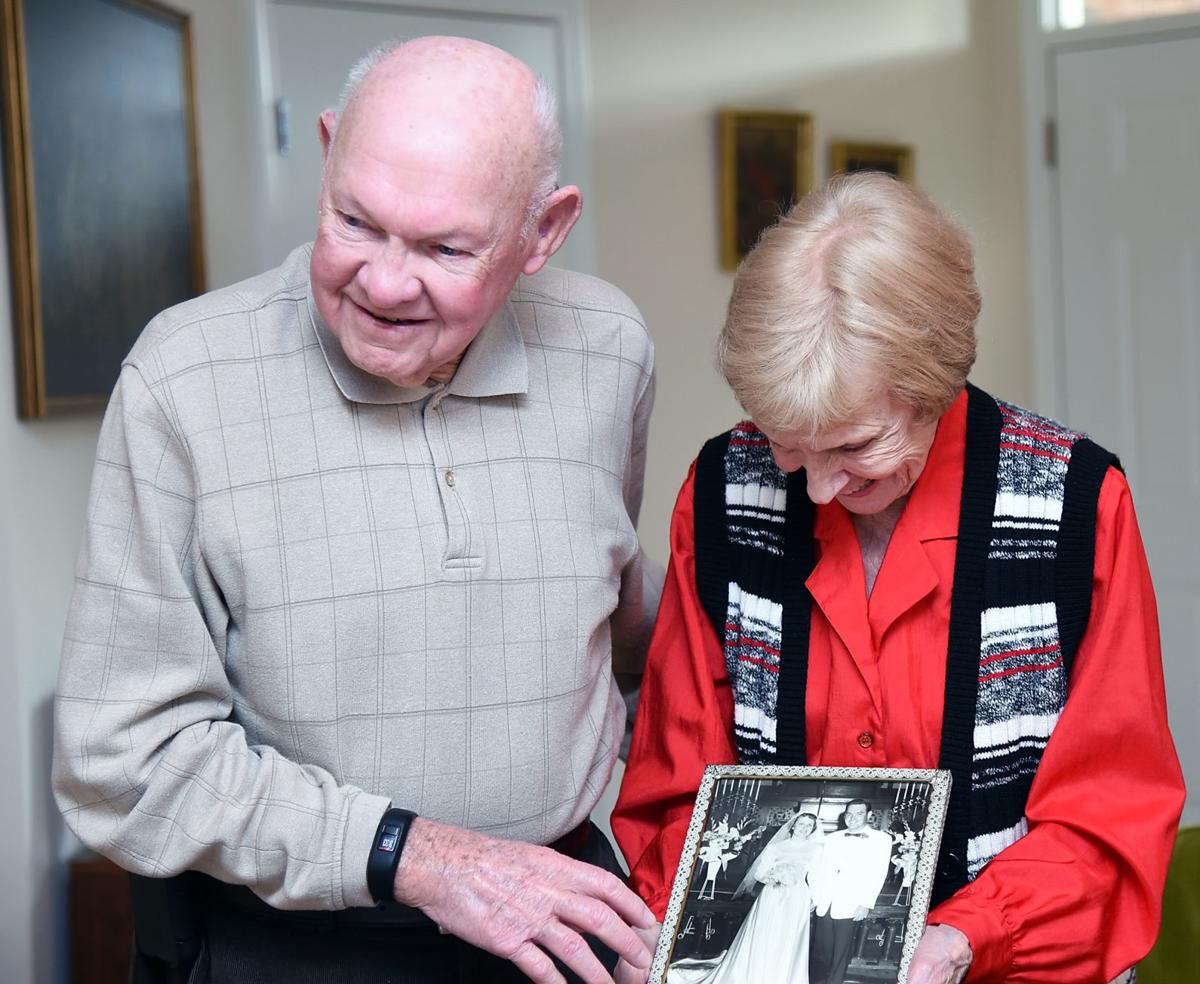 Nick and Martha Cotter show their wedding photo. The couple, married in 1955, has dispensed some Valentine’s Day advice for other couples. They reside at Asbury Place in Maryville. 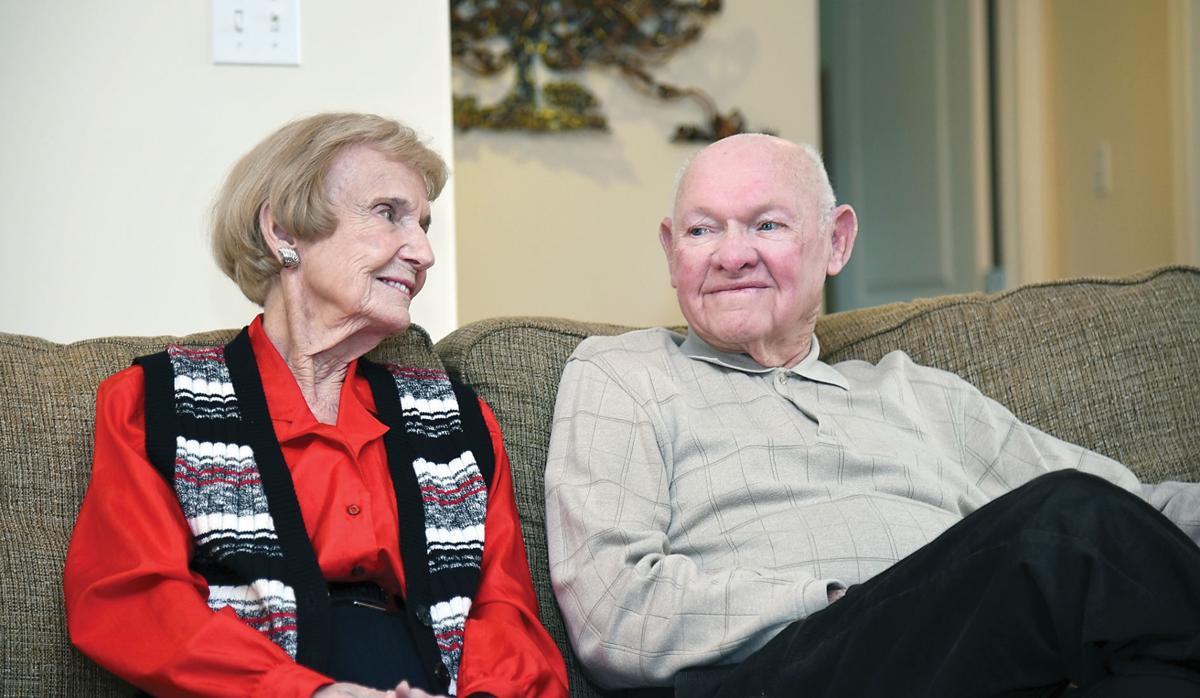 Martha (left) and Nick Cotter share some stories from their 64 years of marriage. Originally from Oklahoma, they spent years in New Orleans before relocating to East Tennessee in 2006.

Nick (left) and Martha Cotter show their wedding photo in their living room at Asbury Place. He was drafted by the U.S. military just six months after they were married, in 1955. They wrote letters to each other every day.

Nick and Martha Cotter show their wedding photo. The couple, married in 1955, has dispensed some Valentine’s Day advice for other couples. They reside at Asbury Place in Maryville.

Martha (left) and Nick Cotter share some stories from their 64 years of marriage. Originally from Oklahoma, they spent years in New Orleans before relocating to East Tennessee in 2006.

For 16 months and early on in her marriage, Martha Cotter would make her daily walk to greet the postmaster in her Oklahoma town.

“Good morning” or “good afternoon,” they would politely say to one another. Then, she would hand him an envelope; he would do the same.

That’s how Martha remembers the mid 1950s when after only six months after marrying Nick Cotter, they were separated by the miles between Oklahoma and Korea. The two met as seniors at Oklahoma State University and when Nick proposed, the young couple decided to work a year and save money for a house.

“That is what we did,” Martha recalled. Martha took a job teaching in Oklahoma and Nick was in the engineer training program for Shell Oil Company. His job was to travel the country, checking on Shell’s many facilities. They were married in June 1955 and settled in New Orleans.

“We were saving our money so we could buy a house,” Martha said. “Then, our plans changed because Uncle Sam decided he needed Nick.”

Just six months married and divided by thousands of miles. The Korean War was over, but the U.S. military needed Nick’s engineering talents. Martha left New Orleans where the newlywed couple had been living and went back to Oklahoma to teach while her young husband was on a mission.

Nick ended up with a surveying crew in an engineering battalion. Two other engineers were also sent.

“We wrote love letters,” Martha said. “I wrote to him every day and he wrote back every day. I got well acquainted with the postmaster where I was teaching. I would take my letter in, he would always tell me ‘I have one for you.’”

Both came from tiny Oklahoma towns. She, from Ripley, and he, from Wyandotte. Both had populations of less than 500 at the last census. Martha grew up with five brothers and sisters, while Nick has one sister.

It was tough, Nick said, to just be starting a life together and then have it interrupted. “I didn’t think they needed us that much, but we were there anyway,” he said. “It wasn’t very good being apart at that time, having just been married.”

But we survived,” Martha interjected.

When Nick was drafted, his first assignment with the Army was to go to Fort Belvoir in Virginia and teach some of the other soldiers how to build roads. Martha went with him and got a job in the office of the commanding officer. News of Nick’s deployment was shared with her before Nick even knew.

The commanding officer told Martha that Nick was being shipped overseas. When she told her husband, he was sure it wasn’t true.

“I said Nick, I don’t think the commanding officer made a mistake. I think you are going to have to go.”

When his 16 months were over, Nick came home and he picked back up with his job with Shell. Martha said the company even paid half his salary while he was away. That was more money the couple saved for their house.

After working for Shell for 20 years, Nick then worked for 20 more years for a consulting firm in New Orleans before retiring. Then in August 2005, Hurricane Kartina knocked New Orleans off its feet. While this couple didn’t suffer any losses, they saw it as a sign to make a move.

In 2006, they relocated to Lenoir City where they lived for 12 years before choosing to come to Maryville.

“We decided after Katrina there was no reason to stay,” Martha said.

They first looked to Oklahoma for a town in which to retire. But they ultimately decided trading hurricanes for tornadoes wasn’t a good gamble.

They like the four seasons here and the people they now call friends, the couple said.

Today is Valentine’s Day. Martha and Nick have celebrated 63 of them as they were apart for two. Both said they usually go out to dinner privately. Nick has to figure out what to replace chocolate with since Martha is allergic.

What to work on

On what keeps a marriage intact, they have no doubts. It’s commitment and communication, they said.

That commitment includes to each other and to God, Martha said. Communication has to include some “I’m sorry, I was wrong” dialogue, they agreed.

Nick said he sees marriage as give and take on both sides. “It is no one-way street,” he explained. He said being away from their families early on in their marriage probably helped.

“We had to work things out because we couldn’t go home if we wanted to,” he said.

Having the same political leanings and growing up in the same faith denomination make things smoother, too, the Cotters said.

Despite being in their 80s, these two are keeping busy with the Asbury Singers, a choir Nick started. They gather to sing at 4 p.m. each Saturday in the chapel of the assisted living building. Playing duplicate bridge with three different clubs occupies some of their spare time, too, along with exercising at Asbury’s facility.

The two also enjoy traveling. They will visit Iceland later this year. China, Australia, New Zealand, Norway and Hawaii are past destinations.

The love letters they wrote one another decades ago are gone now, but the love that brought them together as young college students remains as strong as ever. Thankful for each other, their children and grandchildren, Martha and Nick are all smiles as they narrate the journey they’ve taken and what lies ahead.

As they stood looking at the wedding day photo from 1955, those 65 years seemed like they happened in a millisecond.

“We don’t look much different than we did back then,” Nick said with a broad smile.