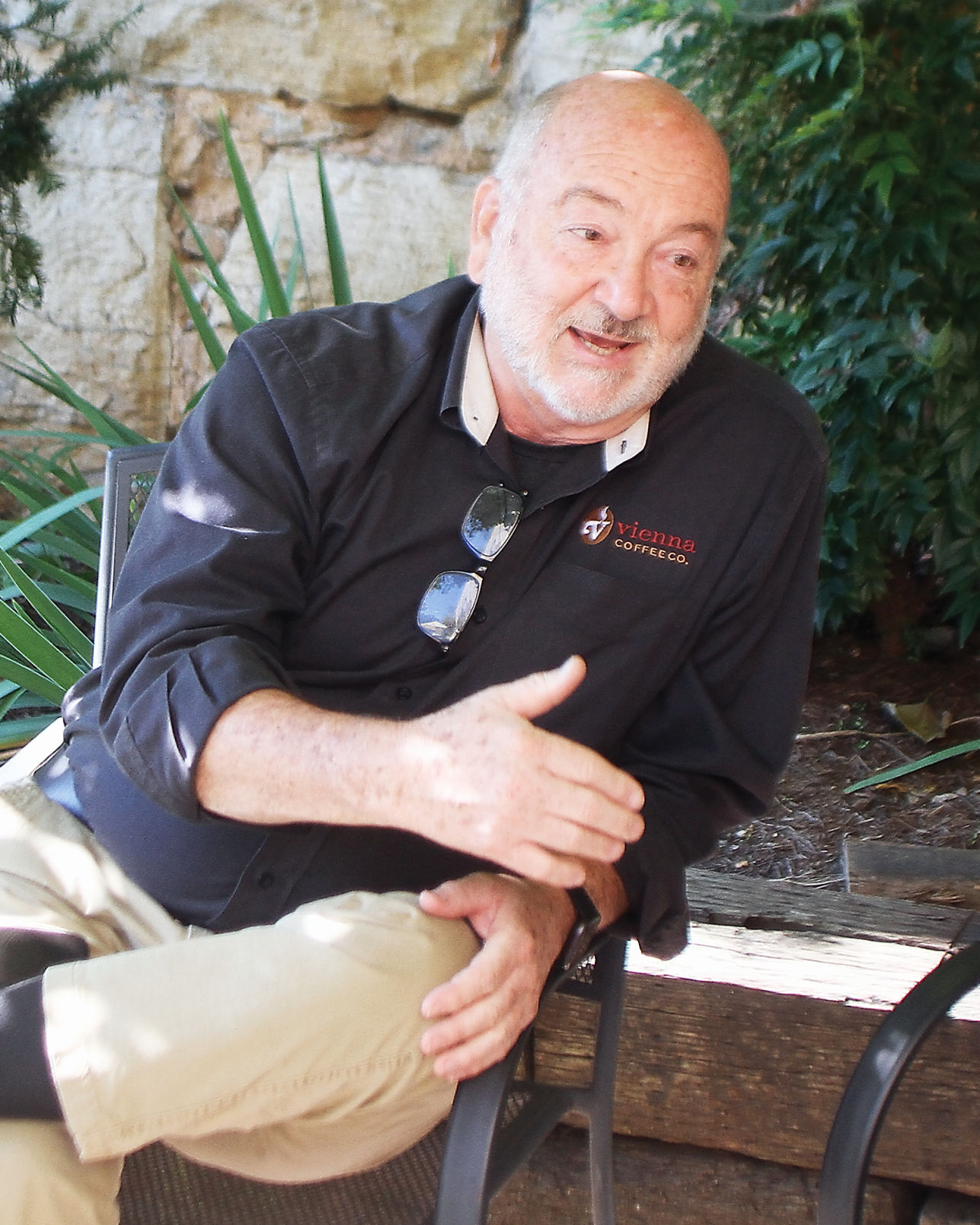 Owner John Clark talks about the 10th anniversary of Vienna Coffee House. He started in the coffee business much earlier, roasting beans in his garage. 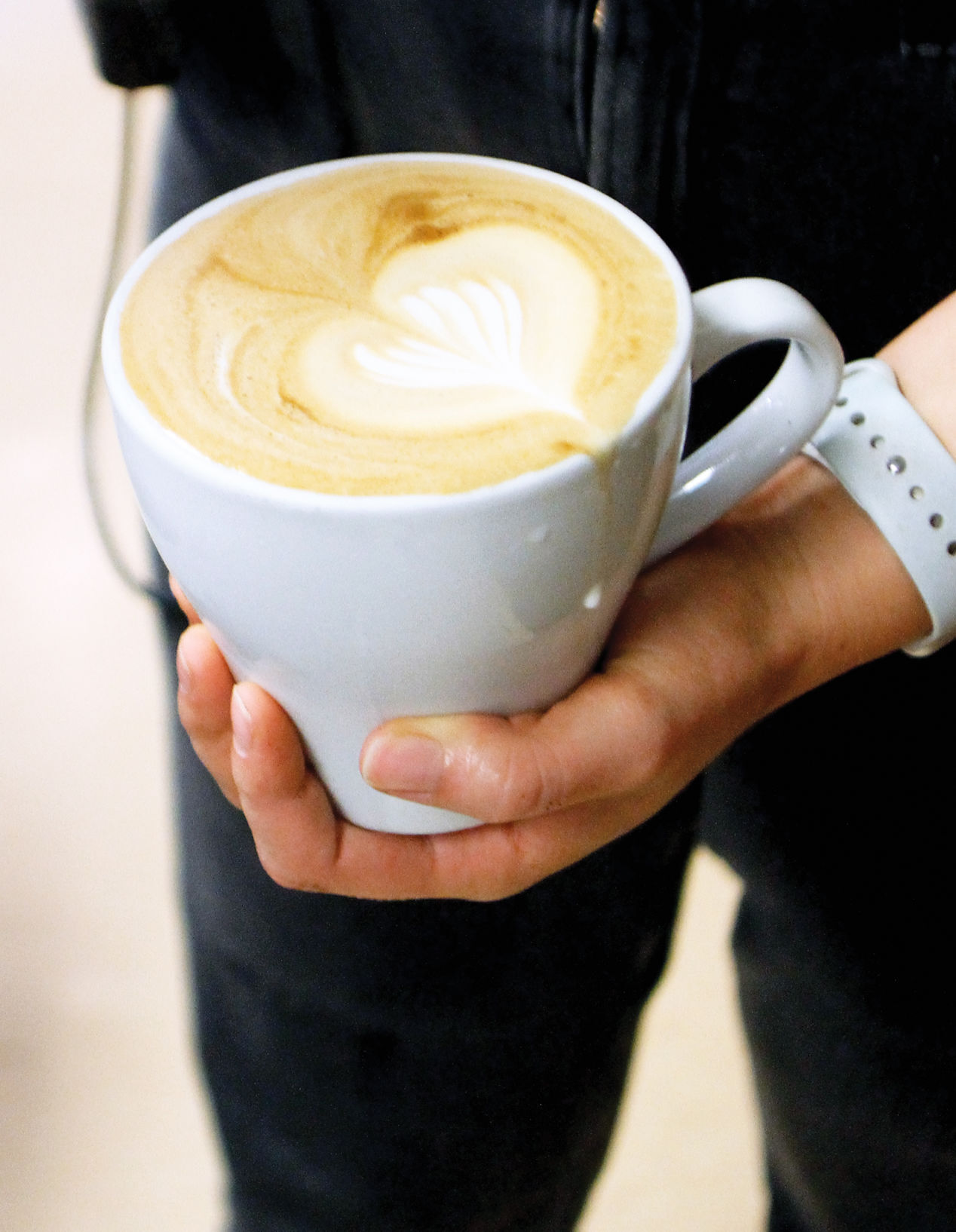 Vienna Coffee is celebrating 10 years in business in Blount County; this latte is one of the shop’s favorite drinks. The shop is convenient to Maryville College, the Blount County Courthouse and downtown Maryville. 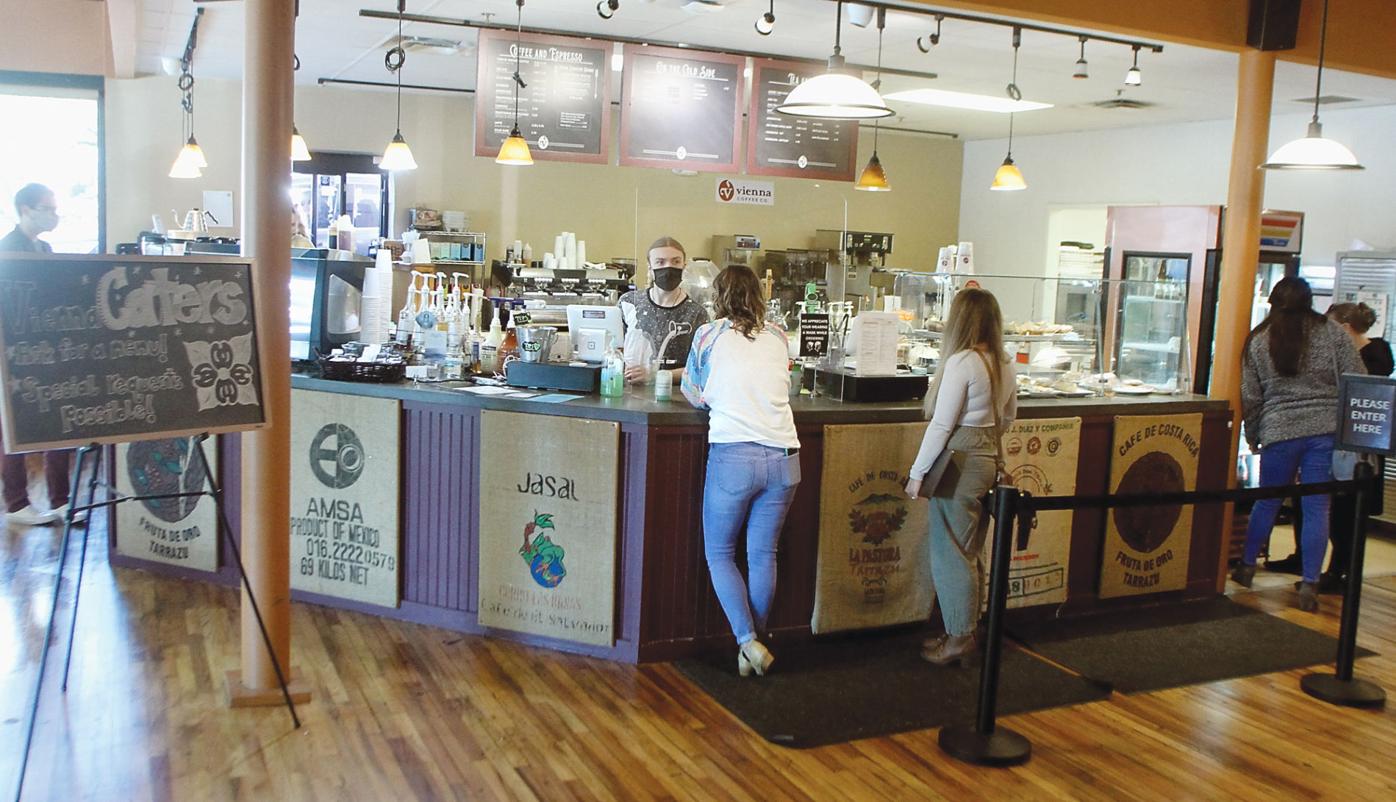 Customers line up at Vienna Coffee House in Maryville. A wide array of hot and cold coffee drinks and pastries are on the menu. The coffee roaster is located in the same building on College Street. 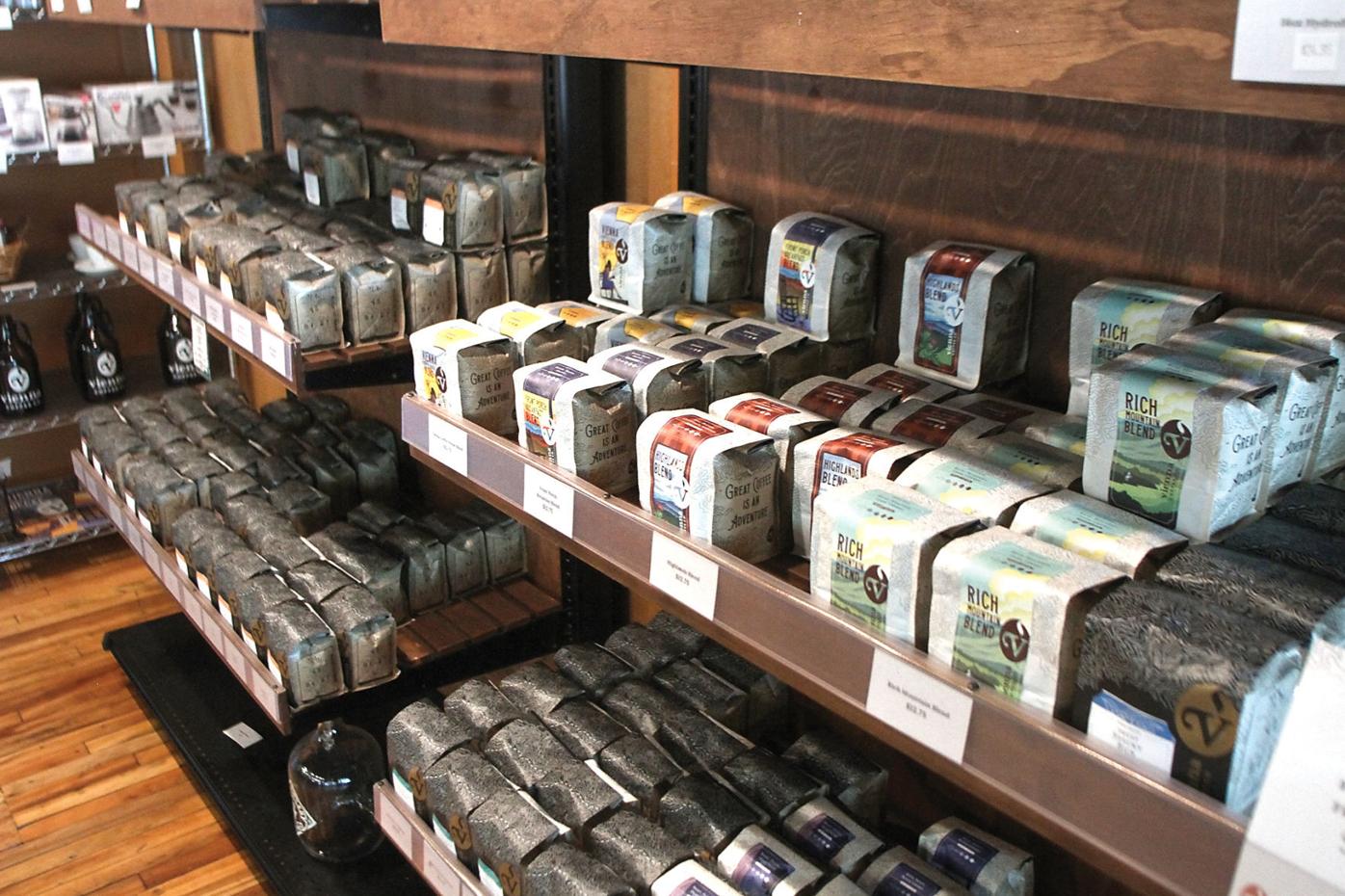 Vienna Coffee House boasts an assortment of coffees they roast on the premises. 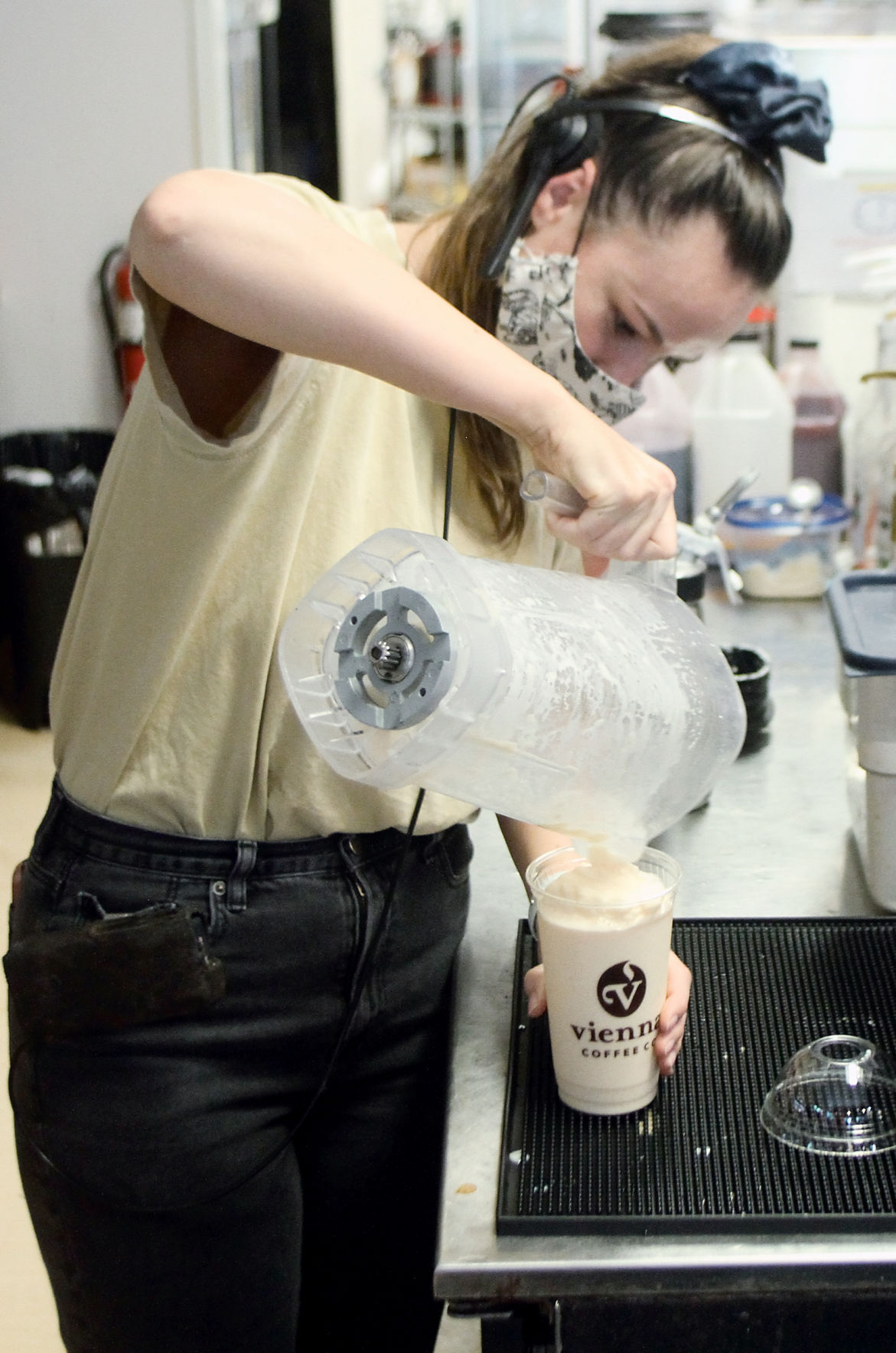 Owner John Clark talks about the 10th anniversary of Vienna Coffee House. He started in the coffee business much earlier, roasting beans in his garage.

Vienna Coffee is celebrating 10 years in business in Blount County; this latte is one of the shop’s favorite drinks. The shop is convenient to Maryville College, the Blount County Courthouse and downtown Maryville.

Customers line up at Vienna Coffee House in Maryville. A wide array of hot and cold coffee drinks and pastries are on the menu. The coffee roaster is located in the same building on College Street.

Vienna Coffee House boasts an assortment of coffees they roast on the premises.

A few green coffee beans and a popcorn popper — that was John N. Clark’s first experimentation in the world of crafting coffee.

The Blount native, who is the grandson of Emma Proffitt Clark, moved away to San Francisco after college and worked in hazardous waste removal and raised his two daughters, Jamie and Lindsey, with wife, Sue.

It was 1996 when the Clark family got the chance to move back to Maryville, as John found a job in Knoxville doing the same type of work as before. It wasn’t long before he knew something was missing.

“Back in 1996 there was no specialty coffee in East Tennessee,” Clark recalled. “No Starbucks, no nothing. I moved from San Francisco where there was good coffee on every corner. I said, ‘Oh man, I am dying. This JFG (Coffee) is good but it’s not special.’”

Word spread among family and friends of Clark’s ingenuity. He began giving away his coffee creations, but that soon became an expensive hobby, Clark said. Despite that, Clark would operate out of his garage for a few years, buying a used coffee roaster he found on eBay.

“That’s when I started smelling up the neighborhood over on Westcliff,” he said with a smile.

The coffee game wasn’t his official business until Clark said his environmental company wanted him to move to Philadelphia, a move Clark wasn’t willing to make. He chose to leave the corporate world behind and quit that job, living on his wife’s salary a while.

His journey moved the bean roasting from the garage at their home to a space on U.S. Highway 411 where the Windy City Grill now operates. He roasted coffee beans for two years at that location before moving the operation over to Everett Avenue.

Clark was making a name for himself, traveling and buying coffee beans from Guatemala, roasting them and then selling his products to coffee shops here in East Tennessee. The wholesale business became Vienna Coffee Company.

“We were telling wholesale companies how to open a coffee shop,” the business owner said. “It sort of rang hollow because we weren’t operating a coffee shop of our own. I had a hard time convincing those customers I was credible because I didn’t have a coffee house of my own.”

Meanwhile, a nearby coffee shop, Higher Grounds, had been established in Maryville. It was opened by Lisa Williamson, who received her coffee from Vienna Coffee Company, but after about a year, she chose to close it down. The location was 321 High St., Maryville.

As Clark saw it, the establishment was a turnkey coffee house, with equipment and furniture still in place. He did what others had wondered why he had not, opening Vienna Coffee House on High Street. That was 10 years ago today. After eight years of roasting beans and selling wholesale, Clark now owned his own retail shop.

The goal had been to get the doors open in time for Maryville’s huge, annual Fall Festival. He made it, opening just one day before the festival did.

“Nobody knew we were there,” Clark remembers.

He also credits another coffee shop owner with providing valuable assistance. Jaimie Matzko operated Thunderhead Perk in Townsend. She closed and came to work for Vienna; one of their signature drinks is the Thunderhead latte. Many of the recipes Clark uses were Matzko’s.

This week, Vienna Coffee House and its customers are celebrating a decade of specialty coffee brewing. Clark took what he learned from his early days of roasting with knowledge acquired along the way, to turn the location into a successful business and gathering place.

The location is now 212 College St., Maryville, near Maryville College, the Blount County Courthouse and downtown Maryville. The move was made in the summer of 2013. This is the former location of Habitat for Humanity’s Restore. They decided to leave due to a leaky roof, Clark said.

Clark moved his roaster to the same property, which totals 18,000 square feet. On a day when the wind is just right, people within a 5-mile radius can breathe in what Clark’s got cooking.

The name Vienna was chosen because Vienna, Austria, is one of the world’s most famous coffee towns, Clark said. They are more like palaces of coffee, he said. Clark also owned a coffee shop with his brother in Miami back in 2000 and sold it in 2005. It was called the Vienna Coffeehouse and Bistro.

They liked the name so much, they contracted to keep it.

This 10th anniversary almost slipped up on Clark. He’s had his hands full learning to operate in a world where many have closed their doors due to COVID-19 and lost revenue. Vienna Coffee House relied on its drive-thru service to see it through the six weeks they closed their dining room.

Vienna sells about 25 varieties of coffee. Between flavors and decafs, single origins and blends, his baristas serve up close to 80 different specialty orders. Today’s anniversary celebration includes 10% off all food and beverages, not including bags of coffee and merchandise.

His cafe manager is Sheila Rivenbark, who came to Maryville from California. She said she was introduced to Vienna Coffee at Taste of Blount. She said sales continue to exceed expectations in this year that’s been anything but predictable. Half of the menu has even been taken away for now due to the pandemic, she added.

When Clark made the decision to move his operation from High Street to College Street, he said the business really needed to see a 30% increase in sales to cover expenses.

“I was a little nervous about buying a building with the expenses to go along with it, but we doubled our business,” the owner said. “It has continued to grow. The last time we looked, we were 30% over a year ago. And that is with COVID and taking out half of the tables.”

There were other Vienna Coffee House locations, one in The Regas Building on North Gay Street in downtown Knoxville and the other at Oak Ridge National Lab. Clark sold the Knoxville location to the building’s owner, who still uses the company name and coffees. The Oak Ridge site will reopen once employees there stop working from home.

That this community has embraced the Maryville coffee house that John Clark built is evidenced by the regulars who show up here. Pastors sit to ponder their sermons, business leaders hold sessions here and hiking buddies come every week after their treks.

Before the pandemic, Vienna Coffee House was a venue for live music. Clubs meet in the large area upstairs. Fundraisers like Beautifully Made use the space. There is even a church congregation calling Vienna home.

As Clark looked out over the outdoor patio of his business, a favorite memory surfaced. He said he actually served his first cup of coffee when he was in high school and worked at Gilbert’s Coffee House. Ironically, it was located in the lot right next to Vienna. The concrete steps for that establishment are still there.

“That was the first place and this will be the last,” he said.