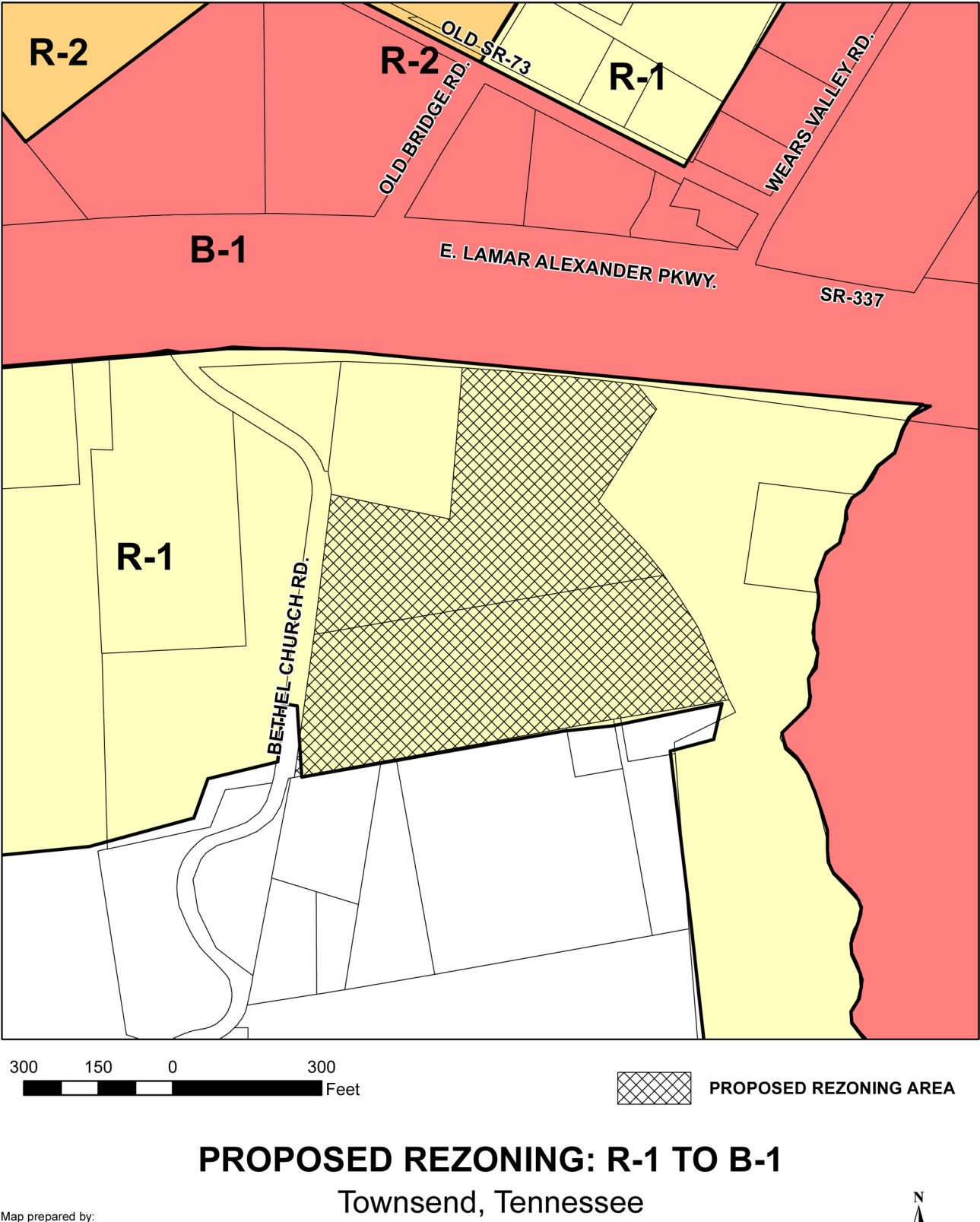 A zoning map shows the proposed rezoning of land off Bethel Church Road and East Lamar Alexander Parkway in Townsend. Commissioners turned down a request Tuesday to rezone the land from residential to business. 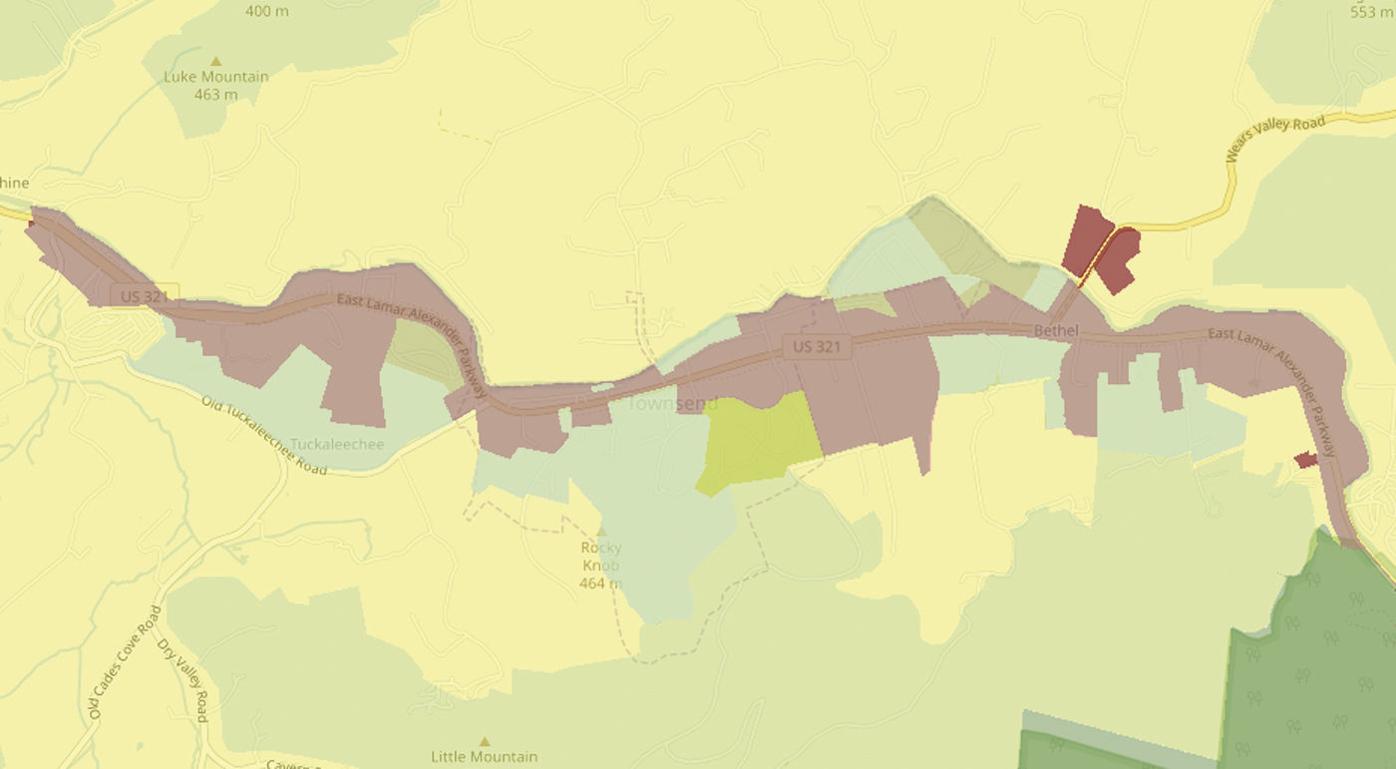 A zoning map shows the proposed rezoning of land off Bethel Church Road and East Lamar Alexander Parkway in Townsend. Commissioners turned down a request Tuesday to rezone the land from residential to business.

There were no second thoughts about voting against a local development move in Townsend’s October board of commissioners meeting.

Commissioners voted unanimously Tuesday against rezoning land next to Bethel Baptist Church just off the road of the same name.

A proposal to rezone the land from low density residential to general business was sent to the commission through planning, but discussions about the property’s fate started out with concerns.

“I haven’t seen any signs to notify anybody that this was going to be discussed,” Commissioner Becky Headrick said during the meeting.

“They never said why they wanted this to be rezoned,” Mayor Ron Palewski commented.

The property in question is made up of two parcels.

One is owned by Joseph and Donna Butler, according to Blount County geographical information system maps. The same maps also show the property — 5.06 acres of wooded land just off East Lamar Alexander Parkway — is assessed at $477,800.

The other property is the same size, set just south of the Butler property, owned by Bobby and Evelyn Graves and has an assessed value of $71,900.

Previous discussions in Townsend planning meetings have also addressed requests to join the two properties into a single parcel.

Commissioners said Tuesday they believed the land was set to be used for some sort of business, but weren’t aware of any specific intentions.

“As a resident of the property that it’s beside, I’d prefer not to be between two possible businesses,” Headrick said. “And if you do this this time, you’re going to have others coming in wanting that ... and if you do one but not the other then you’re playing favoritism.”

Commissioner Michael Talley said during the meeting he had called Regional Planner Joe Barrett and asked about another instance in which an area along Old State Highway 73 was set to change from residential to business.

Minutes from that instance — an April 2014 planning meeting — showed how residents had amassed 50 signatures petitioning to leave the property be, especially since it would have constituted something called “spot zoning.”

Spot zoning often focuses on a single property without considering the larger community growth and can result in making an island of a single zone surrounded by one or more entirely different zones.

Such zoning is often frowned upon and, in some U.S. regions, illegal.

“I myself would like to know the reason for this request: if there is a business proposed to go on this parcel and what that business is.” Talley said. “If there is no real intent to develop it as a B-1 zone, then requests to have it rezoned seem to me to be a little bit needless.”

Talley also quoted minutes from the 2014 meeting in which residents noted that commercial expansion “should take place by utilizing existing vacant buildings that are currently zoned for business before expanding the business district into residential areas.”

Talley noted that, since 2014, the status quo has not really changed: there are still vacant Townsend buildings in business zones that could be filled by prospective business ventures.

Mayor Palewski opened the floor for a public hearing on the matter after hearing Talley’s comments. Headrick took the opportunity to reemphasize her own property would be affected and preferred the land be left zoned residential.

She made the motion to not rezone the property and commissioners voted without opposition.

Townsend residents and officials alike have stated repeatedly in public and in interviews with The Daily Times they are committed to keeping the city true to its tagline, “the peaceful side of the Smokies.” Part of that commitment in years past has manifested in careful and considered planning.