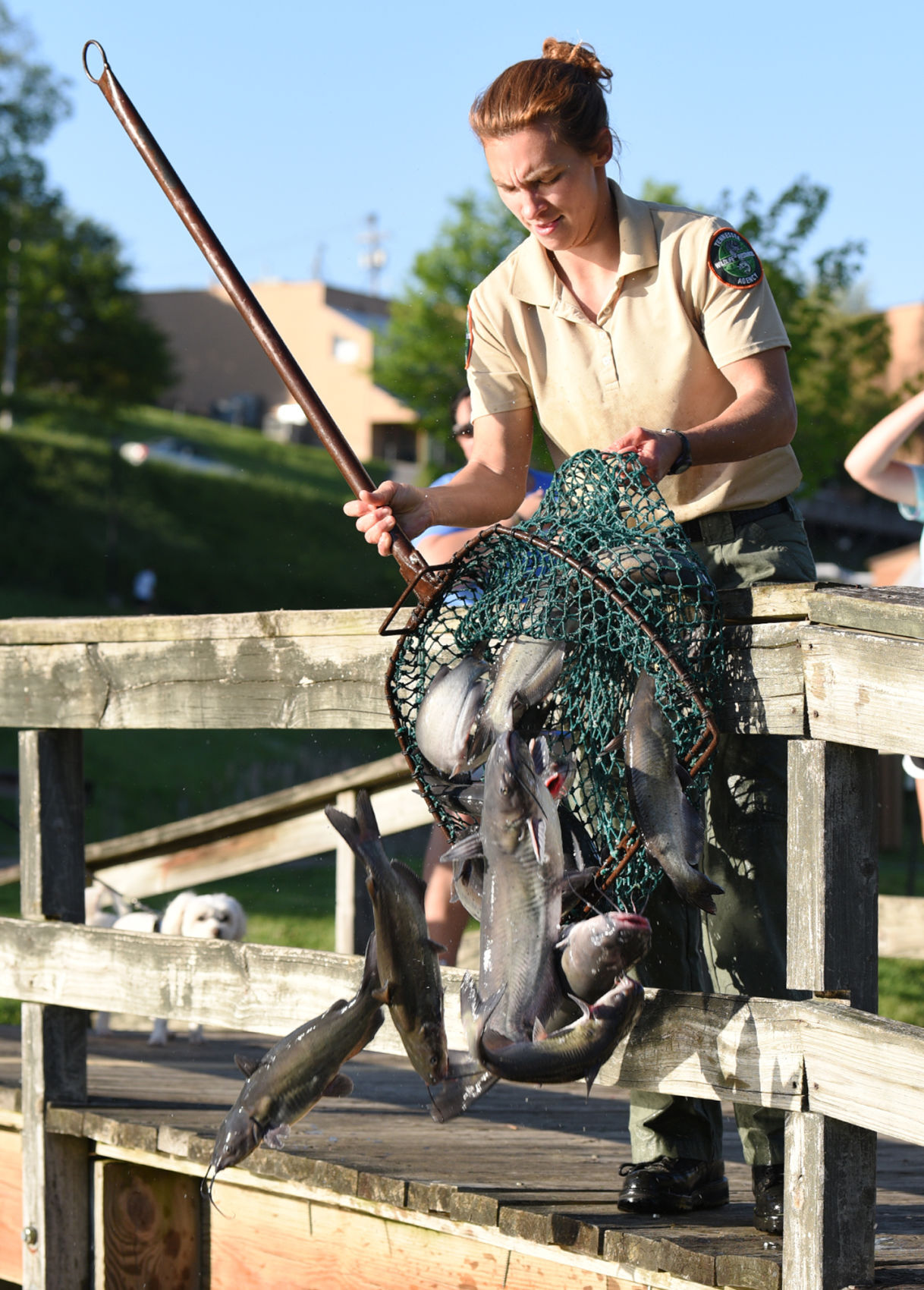 Tennessee Wildlife Resources Agency Region 4 Streams and Rivers Biologist Sally Petre releases a net full of catfish in the Bicentennial Park Pond Thursday evening. They were part of nearly 600 released this week and a total 1,800 to be released before July. 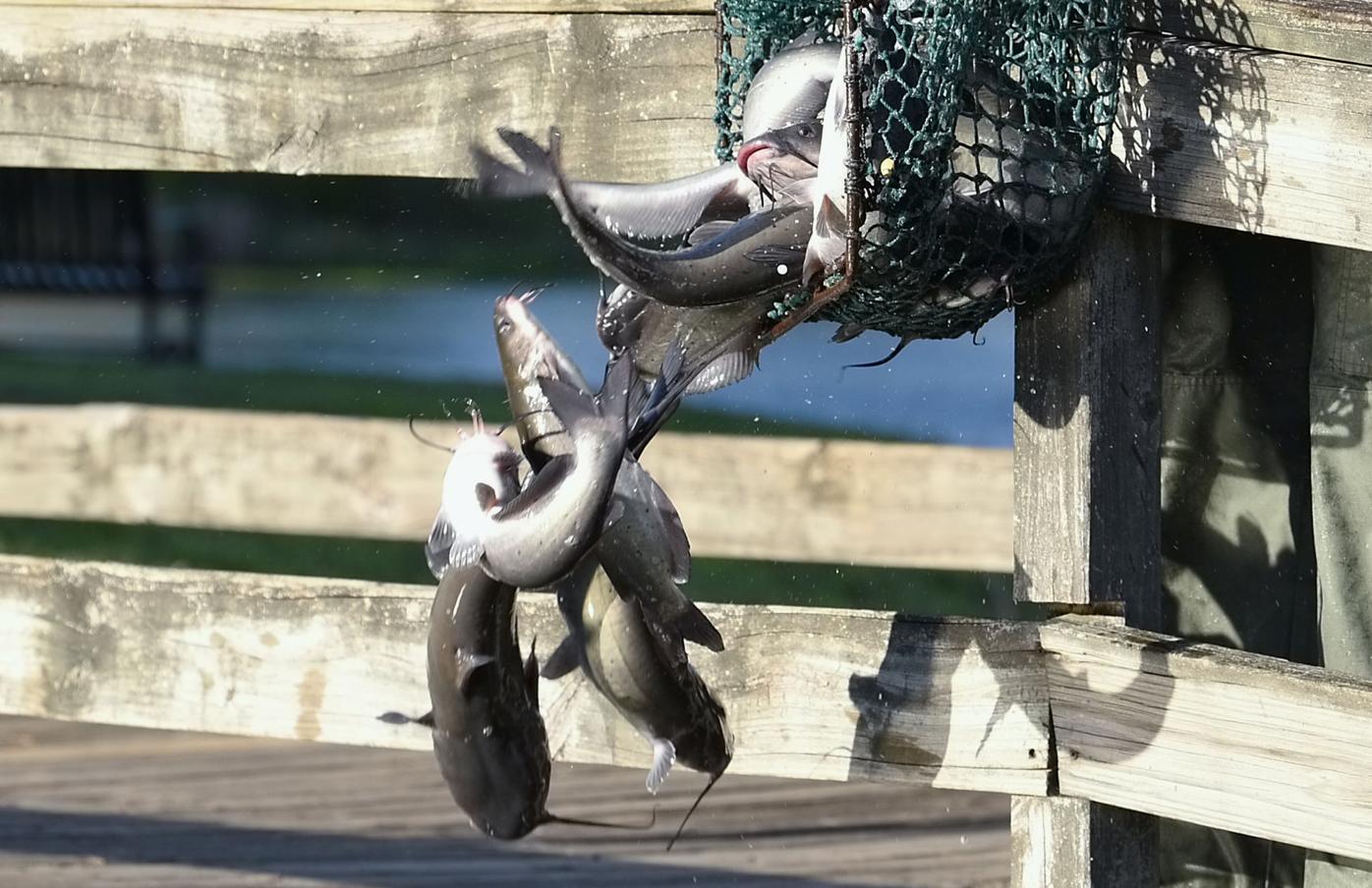 Several of the catfish released into the pond at Bicentennial Park go over the side of the bridge Thursday evening. 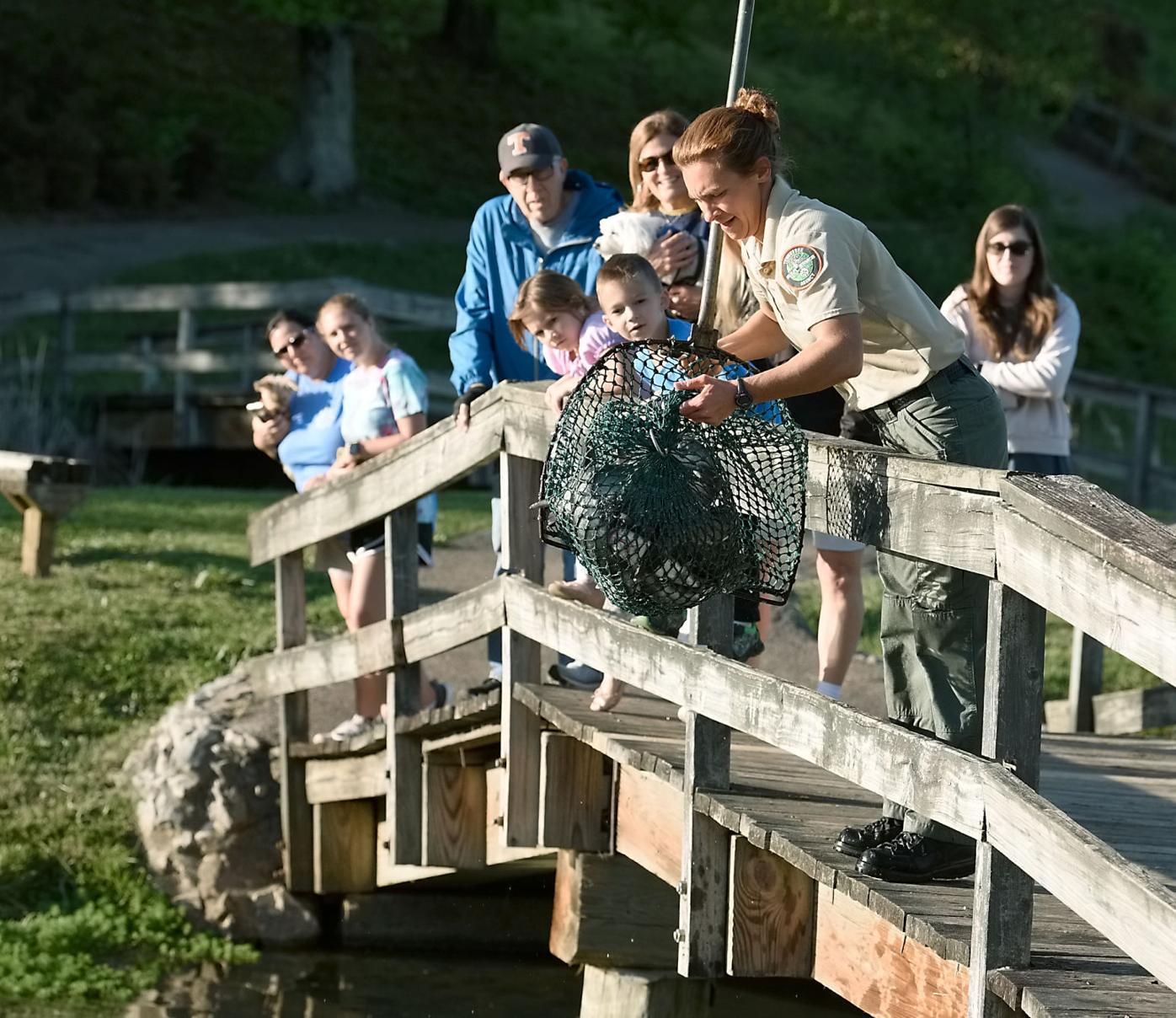 Tennessee Wildlife Resources Agency Region 4 Streams and Rivers Biologist Sally Petre releases a net full of catfish in the Bicentennial Park Pond Thursday evening. They were part of nearly 600 released this week and a total 1,800 to be released before July.

Several of the catfish released into the pond at Bicentennial Park go over the side of the bridge Thursday evening.

It’s the second species of fish the agency brought to Maryville in 2021 after an ongoing effort to keep the park’s waterways full of rainbow trout saw crews add more than 1,000 during the winter months.

Now those trout have some similarly sized neighbors: TWRA Region 4 Streams and Rivers Biologist Sally Petre is responsible for stocking and studying urban Maryville fishing spots and said in communications with the city of Maryville the catfish are a catchable size — about 1 pound or more.

That’s important because the lake falls under statewide creel restrictions that allow unlimited catches for channel catfish under 34 inches, which these catfish are, Petre explained.

Blount’s avid angling community has been eager to reel in trout — Petre recently said the local 2019-20 stocking proved to be some of the most well received in the state — but TWRA is asking people to be conservative with their catfish takes.

“This is a community lake and we want people, especially new anglers, to be able to come, fish and be successful, so only take as many as you need for dinner,” Petre told city officials.

She also reminded anglers they need to have licenses to fish in the lake, whether they’re aiming for catfish or rainbow trout.

Catfish won’t be stocked in Pistol Creek, only in the lake, she added.

TWRA scheduled trout stocking in Maryville three times during the 2020-21 winter: Once each in December, January and February. Trout need to be in colder water, which is why the agency only stocks them late and early in the year, bringing around 400-600 fish each time.

Petre told The Daily Times by phone Friday this is the first time TWRA stocked the lake with catfish. Moreover, it’s part of a larger effort to bolster fishing in city lakes.

“We’ve got kind of a pilot initiative where we’re trying to ... do a community fishing program,” she said. “Maryville has been so supportive of the trout stocking, and it’s been so successful we thought this would be a good opportunity to put catfish in there as well.”

She added Maryville’s is one of only a handful of town lakes — at least one in each of TWRA’s four service regions — across Tennessee getting stocked with catfish this spring.

TWRA will return in May and June to put an estimated 1,200 more catfish in the lake, she said, adding “We’re really excited. I think this is going to be a great place to bring the family, learn how to fish and enjoy the catfish.”

Learn more about licensing and community fishing at tn.gov/twra.