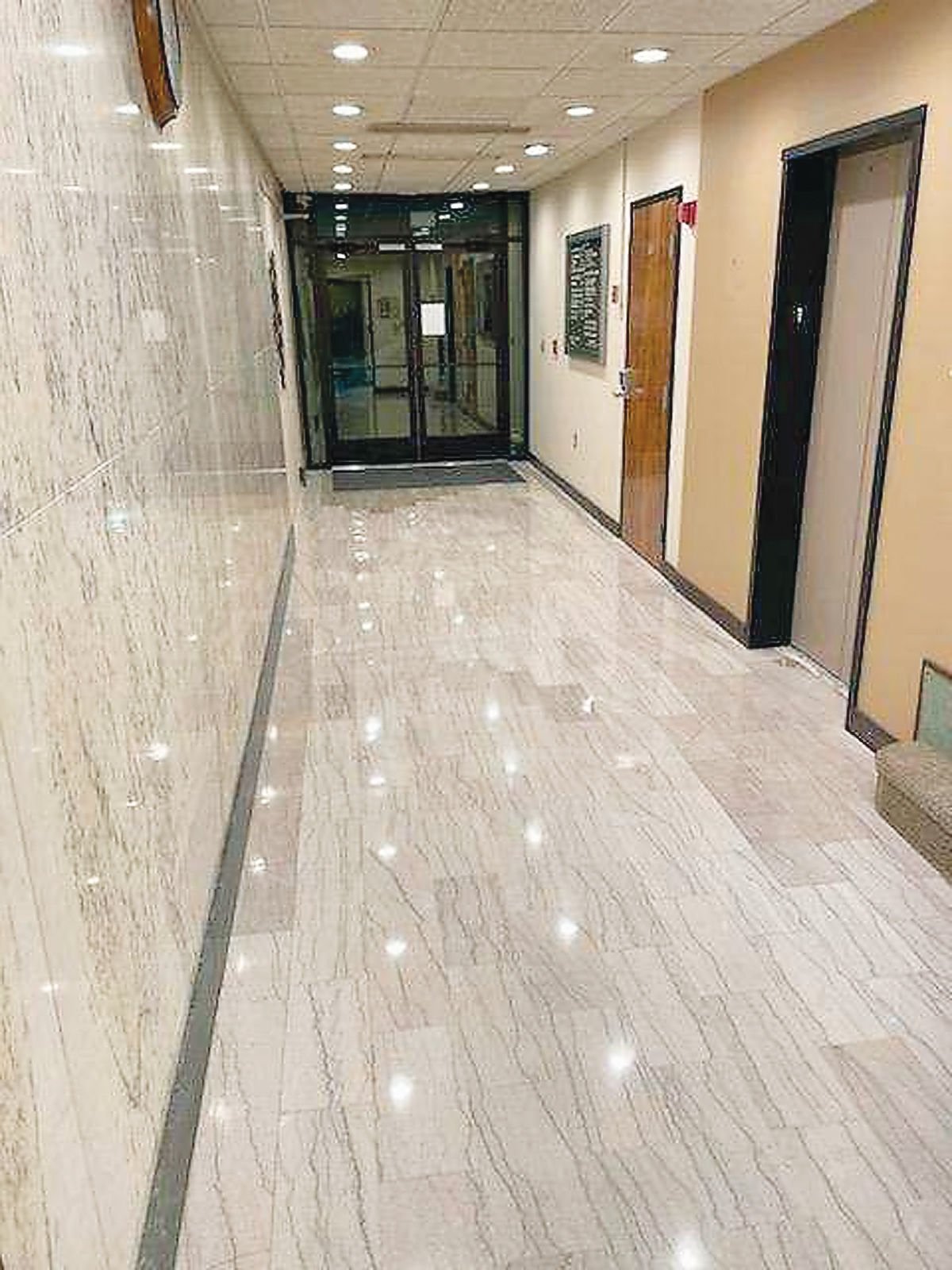 The marble entrance to Preservation Plaza has been cleaned and polished. The marble is Tennessee marble and was placed here 100 years ago when the building housed Blount National Bank. 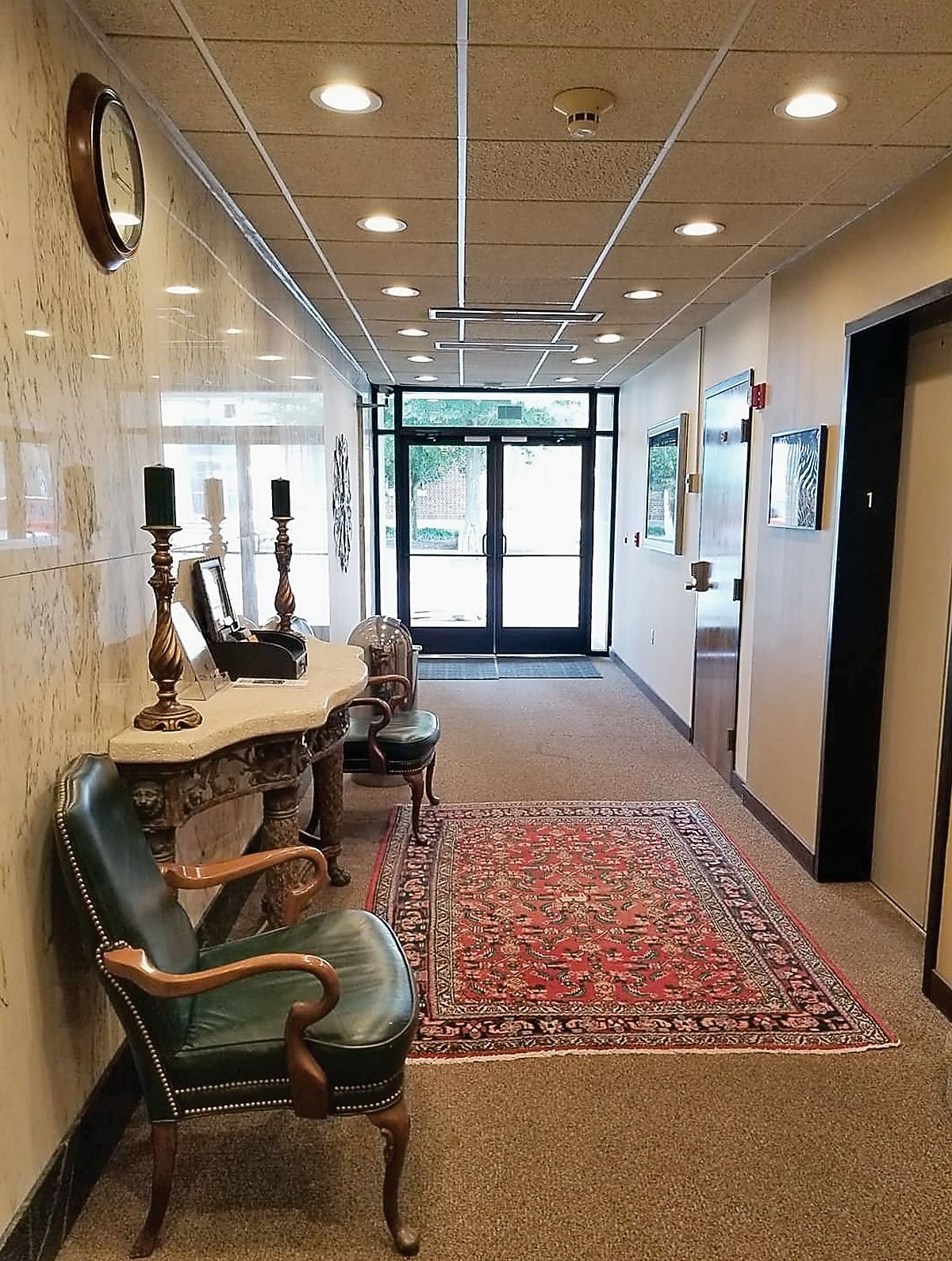 The lobby floor at Preservation Plaza was carpeted for years. Owners had no idea there was Tennessee marble underneath. 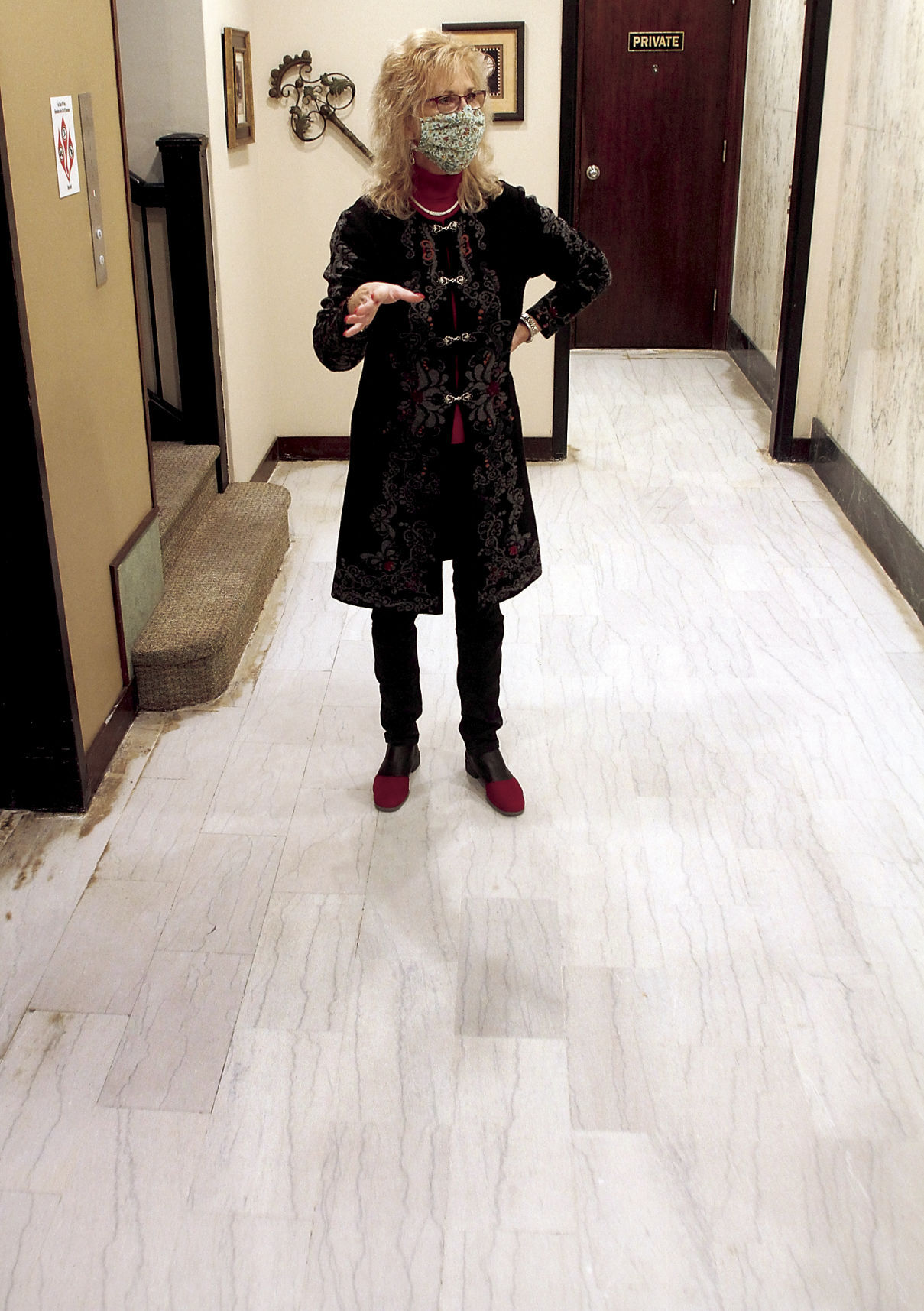 Building co-owner Teresa Horn talks about the marble flooring they found underneath the carpet at the entrance to Preservation Plaza. 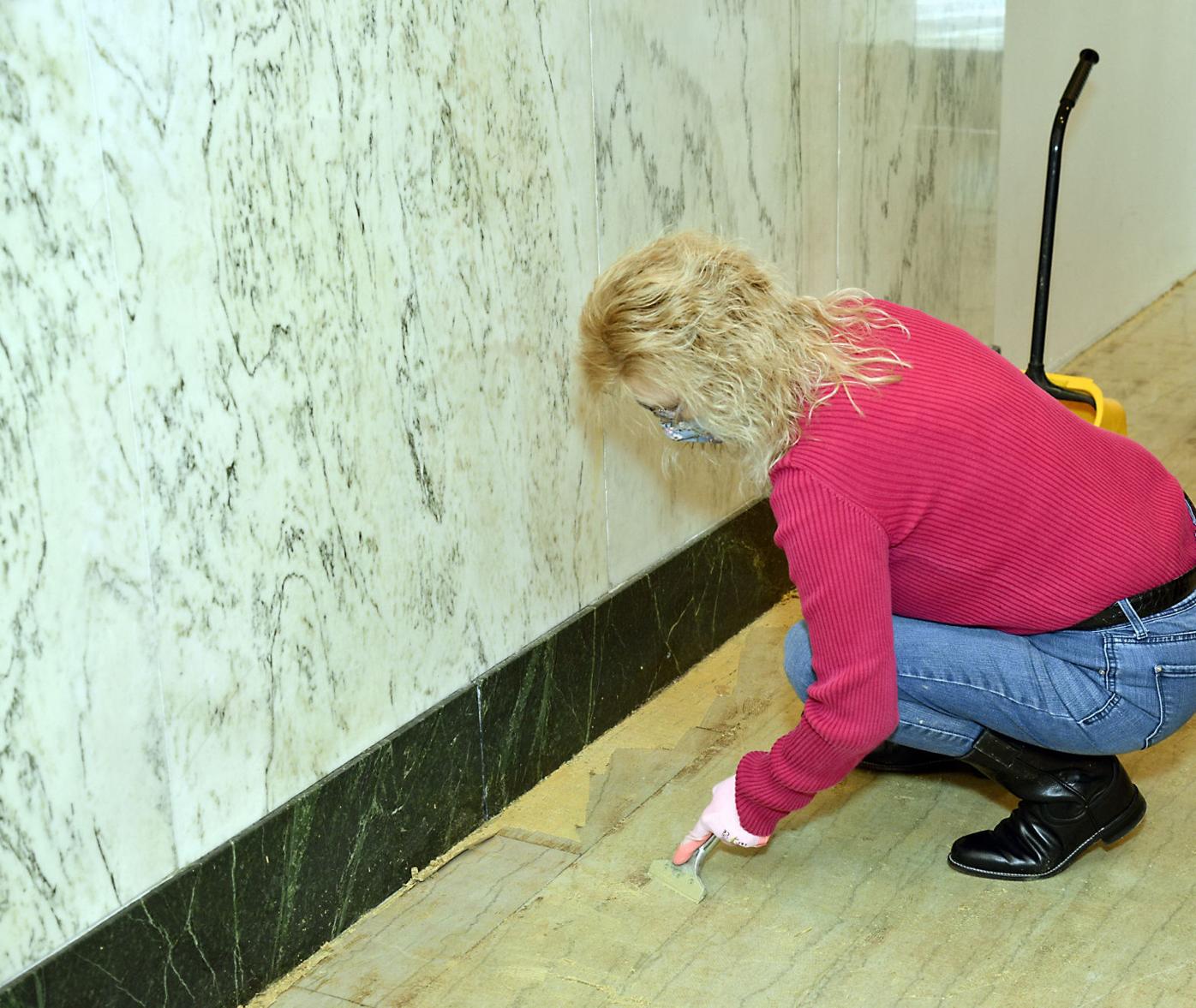 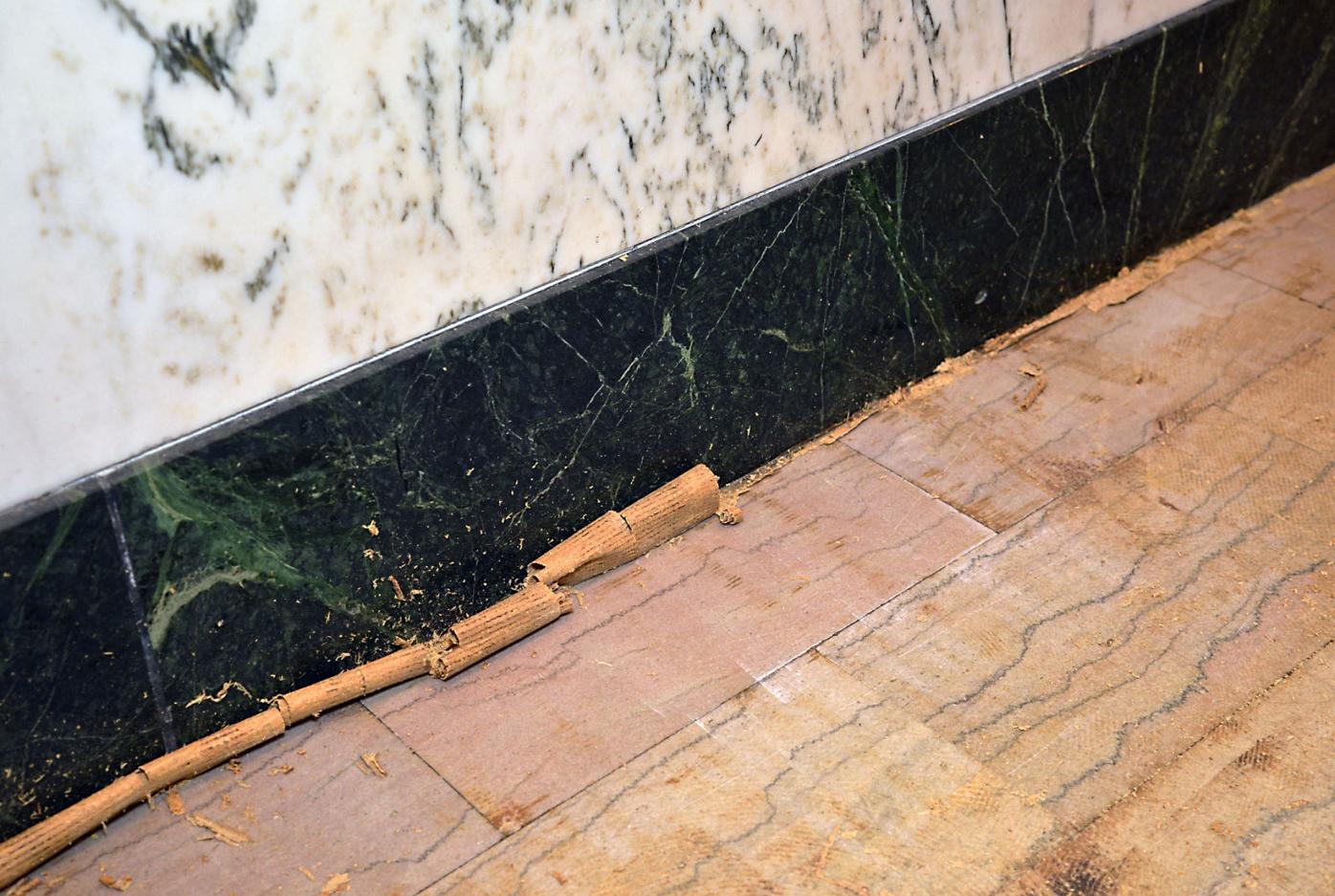 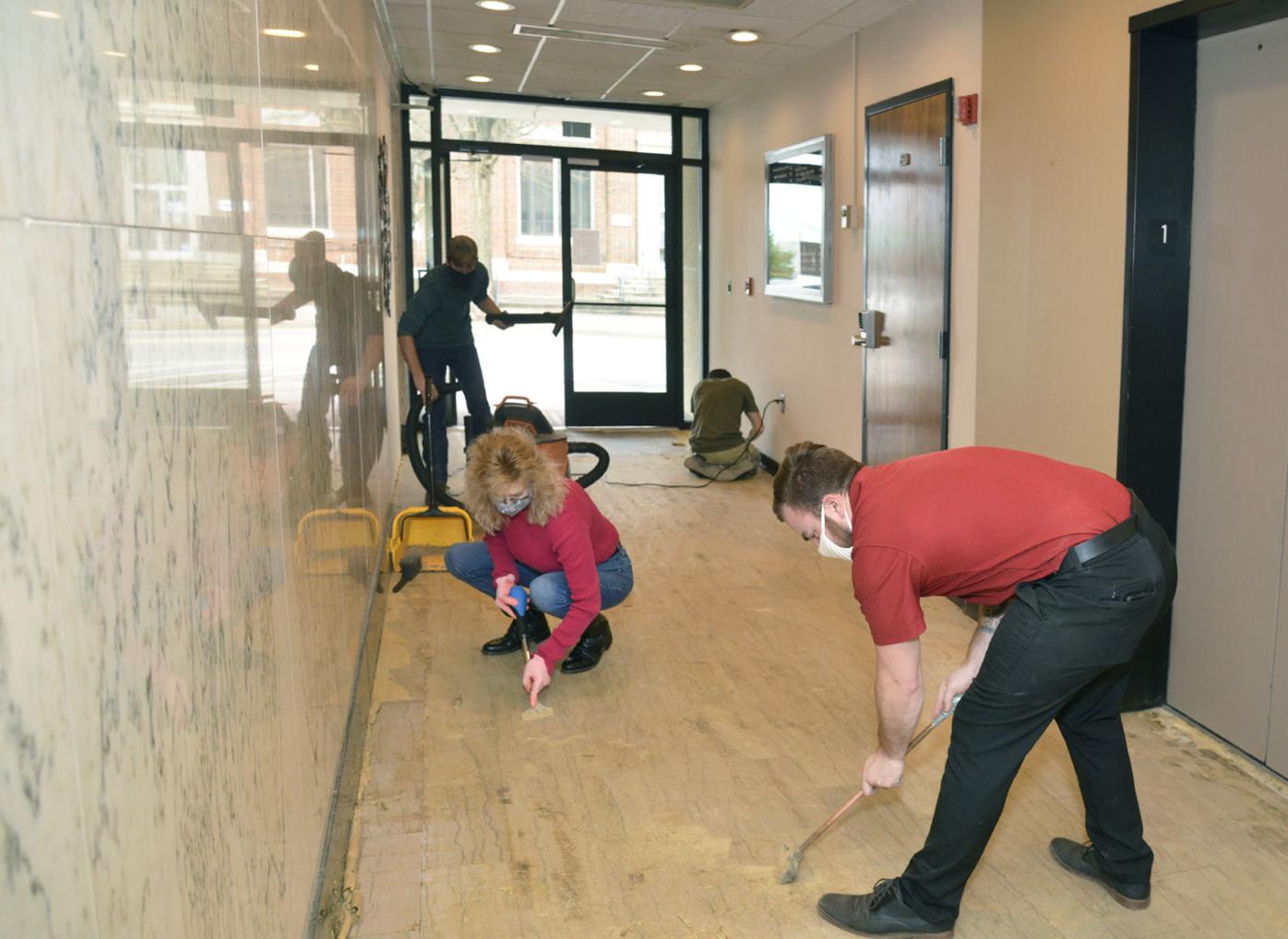 The marble entrance to Preservation Plaza has been cleaned and polished. The marble is Tennessee marble and was placed here 100 years ago when the building housed Blount National Bank.

The lobby floor at Preservation Plaza was carpeted for years. Owners had no idea there was Tennessee marble underneath.

Building co-owner Teresa Horn talks about the marble flooring they found underneath the carpet at the entrance to Preservation Plaza.

When Teresa Horn wanted to remove some outdated and worn carpet in the lobby of her downtown Maryville building, she was certain there would be concrete underneath and already had hired someone to lay tile.

But upon closer inspection with eyes and a crowbar, Horn realized just what she had — marble flooring that was absolutely gorgeous. She canceled that tile order, called in some experts and after a week of carpet removal and glue scraping, she couldn’t be happier.

The company has six quarries from which it extracts the natural stone. The property in Friendsville is 250 acres. One of the quarries is located in Forks of the River in Knoxville.

“It is definitely Tennessee marble,” Buchanan said after visiting the building owned by Doug and Teresa Horn. The building is Preservation Plaza in downtown Maryville and was home to Blount National Bank decades ago. Teresa said the building was completed in 1922, making next year its centennial.

The quarries in Blount County produce marble that has distinct pink tones while the one in Knoxville is known more for its quaker gray tones, Buchanan said. Most Tennessee marbles, he pointed out, have some of the pink tones in them. There are other pink marbles around the world but none that share the properties of the marble here, he added.

Tennessee marble is visible at our nation’s Capitol, Grand Central Terminal in New York City and the National Gallery of Art in Washington, D.C.

Horn said the marble in her lobby has been covered by carpet for probably 20 years or more. She and her husband, Doug, bought the building in 2006 and the carpet already was laid. The discovery of marble was a total shock, she said.

The name they gave the property, Preservation Plaza, speaks to this couple’s passion for preserving the past. There wasn’t any option other than to restore the marble to its original grandeur, Teresa said.

Doug is founder and principal of Quality Financial Concepts and is a certified financial planner. Teresa also works in the business as relationship manager. They founded the Maryville Downtown Association.

The historic stone is located in the lobby of the building at 200 E. Broadway Ave. It measures 350 square feet or more, said Julie Murrell, of Knoxville Marble Polish, the company the Horns hired to work on the floor. She and her husband, Bob, own the company and spent four evenings sanding the floor and polishing it.

Marble is indeed their family business. Bob’s grandfather worked for Candoro Marble in Knoxville. Bob has been teaching restoration for 40 years.

“I sent Teresa some photos of a house I had just done in Sequoyah Hills about two weeks ago where it was a similar situation of pulling up carpet and finding marble,” Murrell said. “She said, ‘We are Preservation Plaza. We are definitely going to save it if we can.’”

Murrell said companies today don’t install marble the way it was done in the Maryville building. There are no grout lines or uneven surfaces; it is one floor.

“All we had to do was grind off the residual glues they couldn’t get off,” Murrell said. “We ground those down and polished. No coatings. Nothing superficial. Just the marble itself.”

Teresa was one of those who got down on her hands and knees and ripped carpet and scraped glue. It took four of them more than three hours but was certainly worth it, she said.

The Horns have been doing extensive work on this old building, which currently has 29 tenants on multiple floors. The bank vault is still present along with an extremely heavy piece of its antiquated equipment. New windows have been installed on some of the floors.

Buchanan said back 100 years ago, when this building was constructed, there were a lot of quarries in the area.

“Back in the 1920s, there were probably 25 to 50 or more quarries active across Knox County and into Grainge and Hawkins (counties) and here in Blount County,” he said. “This plant here in Friendsville was processing a lot of stone and tile. It is safe to say it was cut here, but it could have been quarried out of East Knoxville.”

It was common, Buchanan said, for banks during that time period to use marble in their construction. As for where else this Tennessee marble can be found — it’s all over.

“In a few cases, it’s been shipped all over the world,” he explained. Apple has been one of Tennessee Marble Company’s largest customers in recent years. The company has put the Tennessee natural stone in some of its freestanding stores, including in Japan, China and Australia, Buchanan said.

“Every major city in every state across the country has Tennessee marble in its buildings,” he said, adding especially those built around 1940.

Close to home, there is Tennessee marble from the Tennessee Marble Company in the Maryville Municipal Center. Its floors are a light rose marble.

“The statue of Sam Houston outside that building stands on a pillar of stone that is our Tennessee marble,” Buchanan said.

The quarry in Friendsville opened in the 1880s. Monica Gawet is owner and president of Tennessee Marble Company, which was started there in 1993. The quarry had been defunct before Gawet took over. She followed her father and grandfather into the stone industry.

The marble, Buchanan said, has been in the ground for 500 million years. Ancient ocean tides are said to have crashed on the coral reefs and shores of the western edge of what is now the Appalachian Mountains, compressing tiny fossilized sea creatures and other organic material together to create the stone. The ingredients of sunlight, water, earth, air and fire have united to preserve these works of art.

And while much stone has come from the quarries at Tennessee Marble Company, Buchanan said they won’t run out anytime soon. There are still hundreds of thousands of tons of stone here. “We will be quarrying for 300 years,” Buchanan said.

As for Preservation Plaza, Teresa Horn said she will continue to work on areas and might even uncover more marble.

The Horns are seeking old photographs and newspaper clippings as they prepare for the building’s big centennial celebration next year.

Murrell said she was elated when Horn called her to come and restore the marble at Preservation Plaza.

“When someone calls with a project like this, it gets expedited,” she said. “We left our day projects to pull double shifts and work evenings over there. We try to really prioritize those things because that is where our passion is — the preservation side of what we do.”