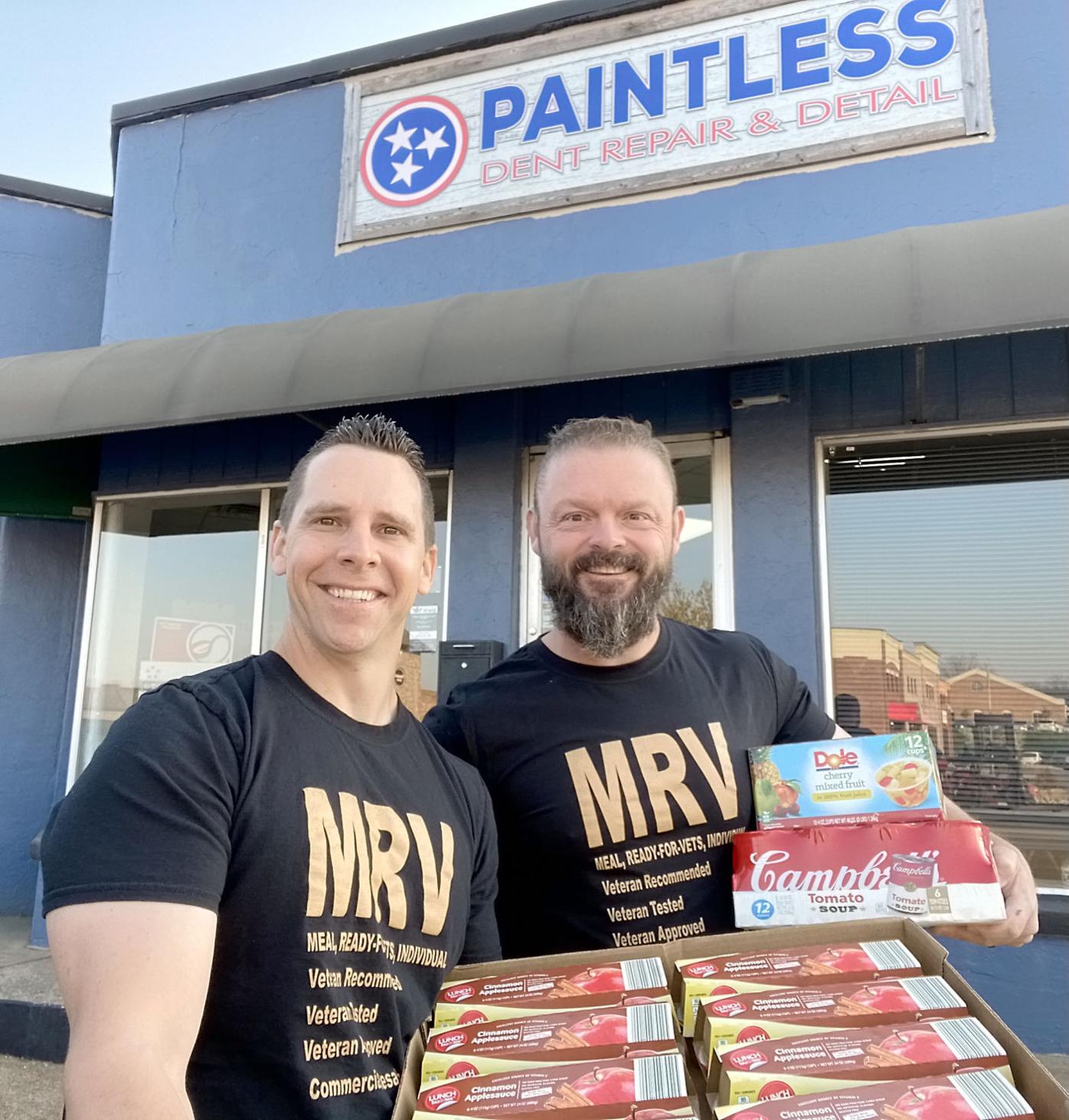 Marine veterans Matthew Gordon (left) and Jesse Hawe have partnered to host a food drive for veterans in the area. They represent the nonprofit Team Red, White and Blue. 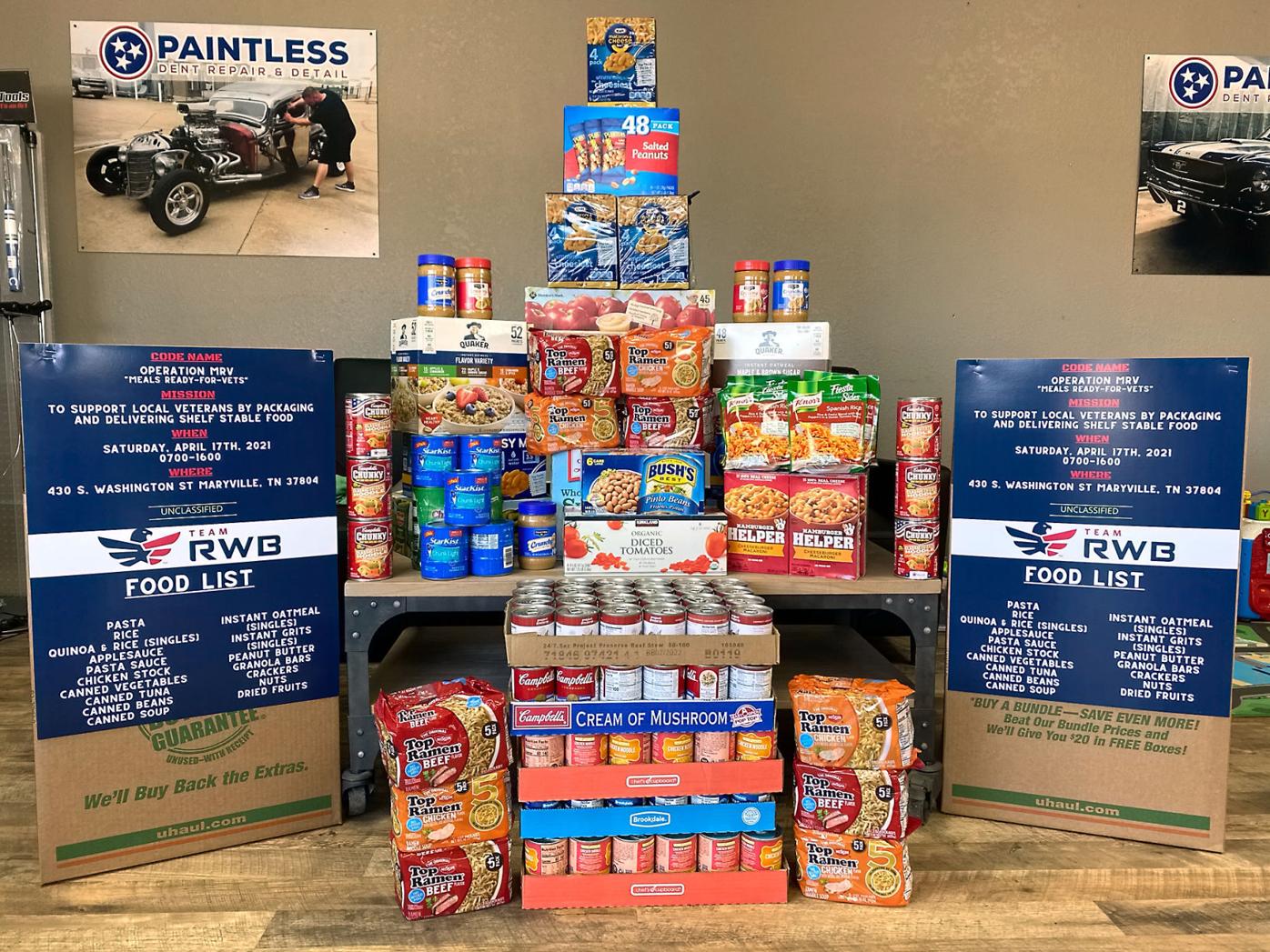 Some of the collected food that will be part of Operation Meals Ready-for-Vets set for April 17 in Maryville.

Marine veterans Matthew Gordon (left) and Jesse Hawe have partnered to host a food drive for veterans in the area. They represent the nonprofit Team Red, White and Blue.

Some of the collected food that will be part of Operation Meals Ready-for-Vets set for April 17 in Maryville.

For the past six weeks, Marine veterans Matthew Gordon and Jesse Hawe have been seeking food donations and planning a community service event in Blount County to help their fellow comrades.

The event, which they are calling Operation MRV, or Meals Ready-for-Vets, is being orchestrated through a nonprofit called Team Red, White and Blue. Hawe serves as the Knoxville chapter leader of Atlanta-based Team RWB, and Gordon is veteran engagement director for the chapter.

Operation MRV will take place from 7 a.m. to 4 p.m. on Saturday, April 17, at Hawe’s business, Dents and Details, 430 S. Washington St., Maryville. Gordon said they already have received close to $5,000 worth of donated food, which will be packed that morning and delivered in the afternoon.

He has served in the Marines since 2007, on active duty until December 2011. Gordon served overseas in Afghanistan in support of Operation Enduring Freedom and is currently in the Marine Corps Reserves.

Hawe is a former corporal in the Marines. He served from 1998 to 2002 and is also an Afghanistan war veteran.

As Gordon went to various places like churches and veterans organizations seeking assistance and information on the veteran population, he said he discovered there are a lot of food pantries that exist locally. However, there is one component missing that is essential, he said.

“We don’t have a food shortage,” Gordon said. “We have a problem with logistics.”

To fill that gap, this Marine veteran is hoping to get area veterans to serve at this event by packing and then delivering the food. He has reached out to Nathan Weinbaum at Blount County Veterans Affairs, the American Legion and to others.

Weinbaum said he has provided Gordon with a list of about 20 veterans who could use extra meals. Gordon said he hopes to be able to deliver to more than 100 veterans in Blount, Knox and Sevier counties.

The food to be distributed will include items like pasta, rice, quinoa, applesauce, chicken stock, canned vegetables, canned fruit, soup, peanut butter, crackers, nuts and canned beans. Each recipient will get several days worth of the shelf-stable foods.

Gordon has worked with Team RWB since January 2020. He said the mission is to bring service members and veterans out of isolation. Each year, more than 250,000 active duty service members transition out of the military, joining 3.5 million post 9/11 veterans already living in communities nationwide, Team RWB reports on its website.

Team RWB seeks to connect the veterans with community service projects in their communities. There are fitness activities and social gatherings that also are part of Team RWB’s plan to increase mental and physical health.

For those wanting to help, there are several ways. One is to donate food. The deadline is April 16. People also can come to the April 17 event and help pack or deliver. Gordon said people can also contact him or Hawe if they know of a veteran in need of food.

“We want the public to know what we are doing and if they know of someone who needs help,” Gordon said.

As for what’s already been donated, he said the food has come from close to 200 donors and is stored at Gordon’s office and home.

There have been businesses like barbershops and car repair shops that have aided in this endeavor by collecting donations. Gordon expressed thanks to all who play a part.

The legwork of getting supporters onboard has gone well, he added. Gordon has invited different groups to the April 17 event, including some motorcycle clubs.

“I am looking forward to seeing a good mix of people,” he said. “People are looking for things to do outside now that the weather is good.”

Operation Meals Ready-for-Vet will take place from 7 a.m. to 4 p.m. on Saturday, April 17, at Dents and Details, 430 S. Washington St., Maryville. Food will be packed and delivered to veterans in need. This is a project of Team Red, White and Blue.