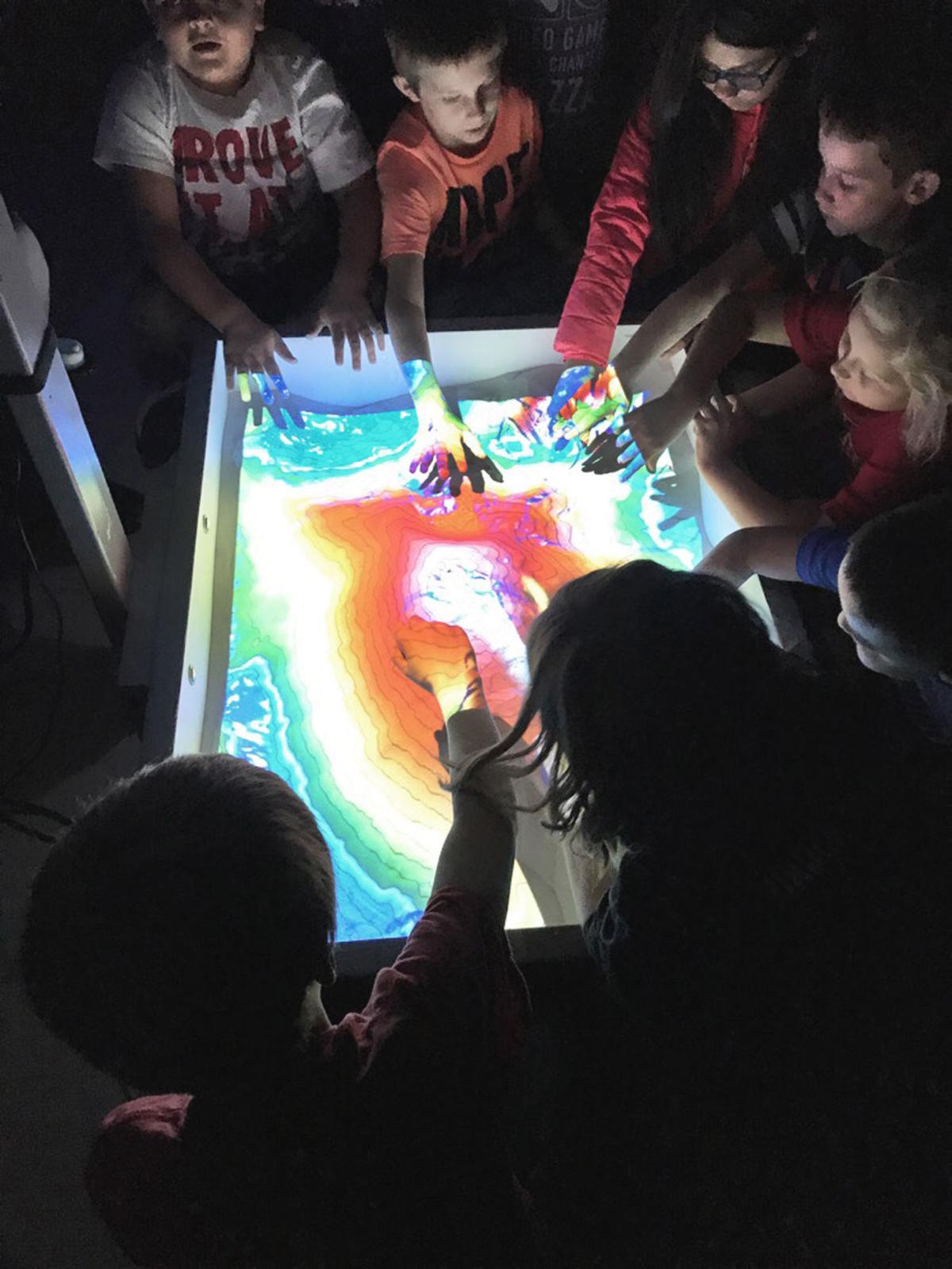 Walland Elementary third-graders see how moving sand changes the contour lines of a map projected on top of it in an augmented reality sandbox from the University of Tennessee last week. 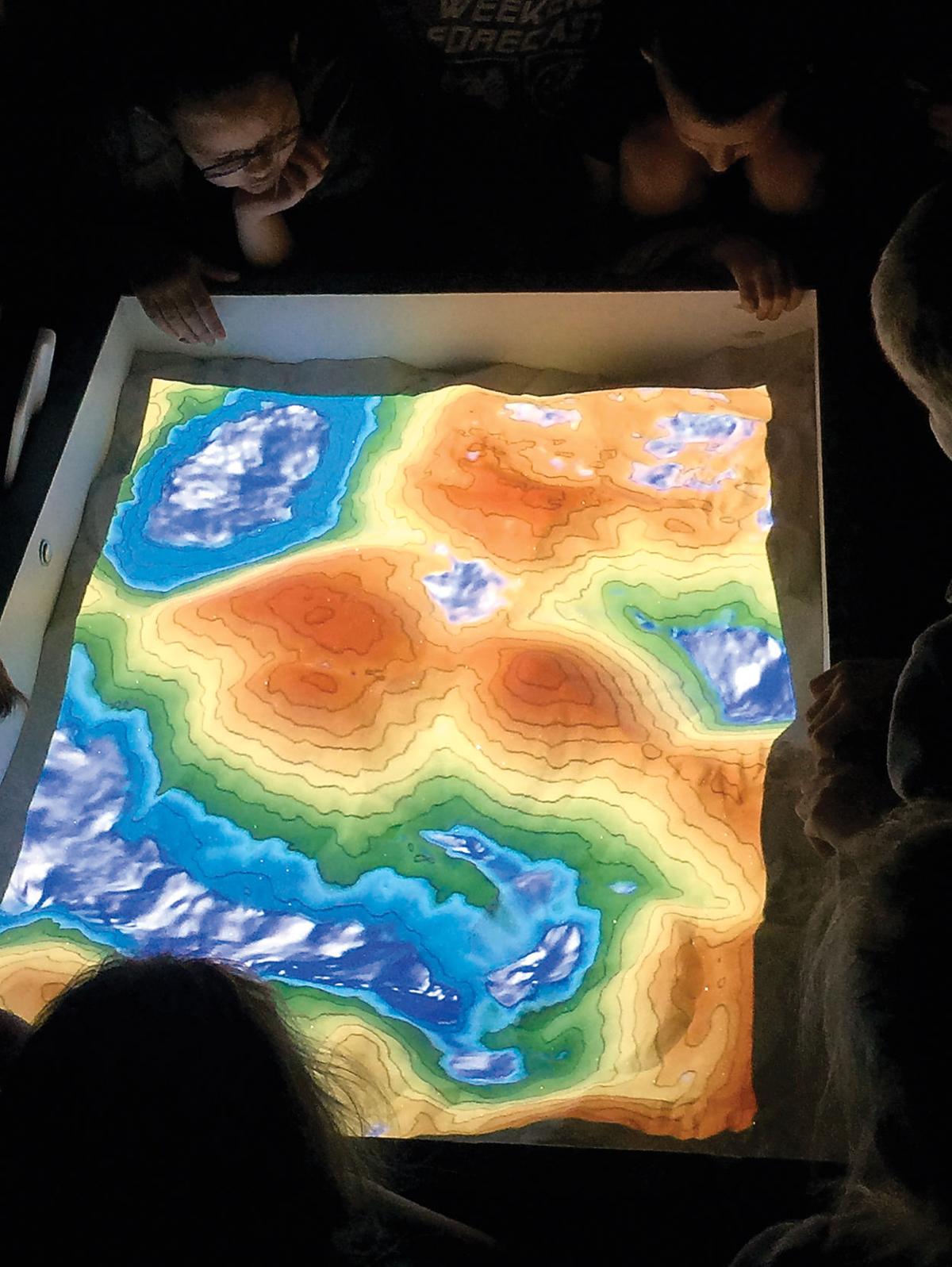 An augmented reality sandbox at Walland Elementary School displays a contour map projected onto the sand, with blue indicating water.

Walland Elementary third-graders see how moving sand changes the contour lines of a map projected on top of it in an augmented reality sandbox from the University of Tennessee last week.

An augmented reality sandbox at Walland Elementary School displays a contour map projected onto the sand, with blue indicating water.

Suddenly they could see exactly what that map looked like in three dimensions, with an augmented reality sandbox, which projects contour lines and colors onto the sand and shows changes in real time.

The students even could make it rain virtually and watch how water runs down mountains and through valleys.

“To make it rain you make a fist and put it under the light for about three seconds,” teacher Phil Young explained. “Then you open your hand and it starts raining,” with blue color appearing on the sand.

The augmented reality sandbox is about 4 feet by 3 feet and 10 inches deep, with about 200 pounds of sand inside, explained Michael Camponovo, GIS outreach coordinator for the University of Tennessee’s Geography Department, who brought it to Walland Elementary on Monday.

A projector displays contour lines and other features on the sand, like the Pokemon Go game displays the imaginary creatures in the real world.

“It takes the real world and augments it digitally,” Camponovo explained.

“It’s the most ridiculous amount of fun you can have playing in a sandbox,” he said.

Researchers from the University of California at Davis built the first AR sandbox about five years ago, and last year a UT professor built a prototype for college students to work with data.

Then they realized it would be a great outreach tool to not only teach younger students about geography but also interest them in careers. “Geography is a great career path for a lot of exciting jobs,” Camponovo said, from meteorology to urban planning.

The Walland third-graders received a contour map and a small tub of kinetic sand in which to shape the landforms shown. Then they took their container to the sandbox to see how well their creation matched the map.

Camponovo said the system can be programmed to show the water cycle, glaciers and lava too. “We’ve been so busy taking it out to schools we haven’t had time to play with the software,” he said.

Young said when teachers at a workshop he attended heard the AR sandbox was available to visit their classrooms, there was an audible gasp.

They can build their own, too.

A National Science Foundation grant funded the research to create the AR sandbox, so the software is free, Camponovo said.

For a couple of thousand dollars, a school can build the box and add sand, a projector and other hardware needed to run the system, he said.

UC Davis has instructions on its AR sandbox website, and Camponovo said UT is eager to help schools, too.

One Knoxville school has combined its sandbox with buildings created with its 3D printer to study the effects of a tsunami in Asia.

Even the basic lessons thrilled the third-graders at Walland. “It was like the coolest thing they’ve ever seen in their life,” Young said.

“It was one of the greatest experiences of my life,” the teacher said. “It wasn’t quite as good as the eclipse, but it was close.”

Watch the video: See the augmented reality sandbox designed by researchers at the University of California at Davis at http://bit.ly/SeeSandbox.