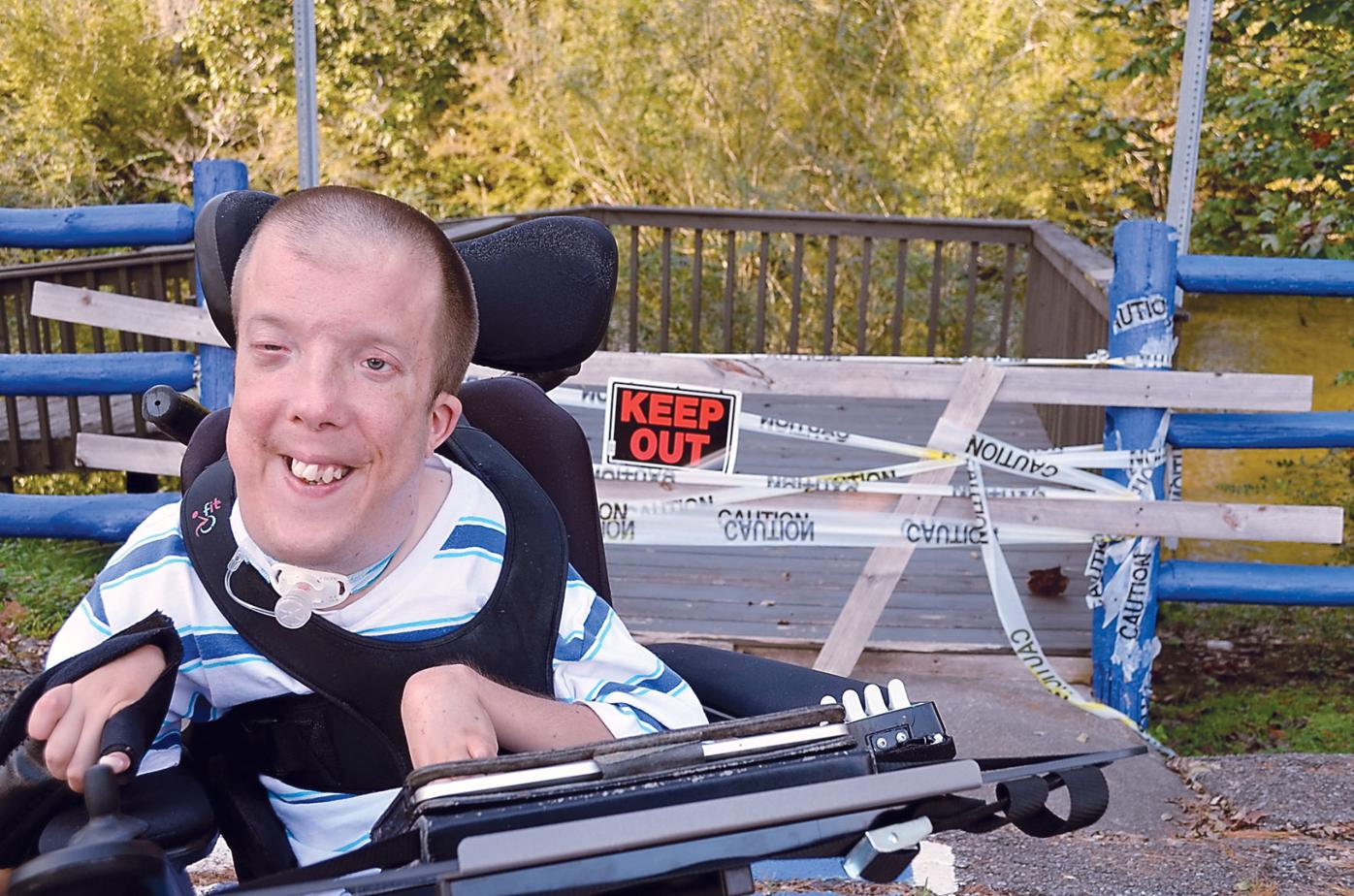 Maryville’s Russell Hogsed is shown in front of the then-closed ramp at the Special People’s Park in Townsend months ago. The park repairs and renovations are complete. He and others can now take the ramp down to Little River to fish. 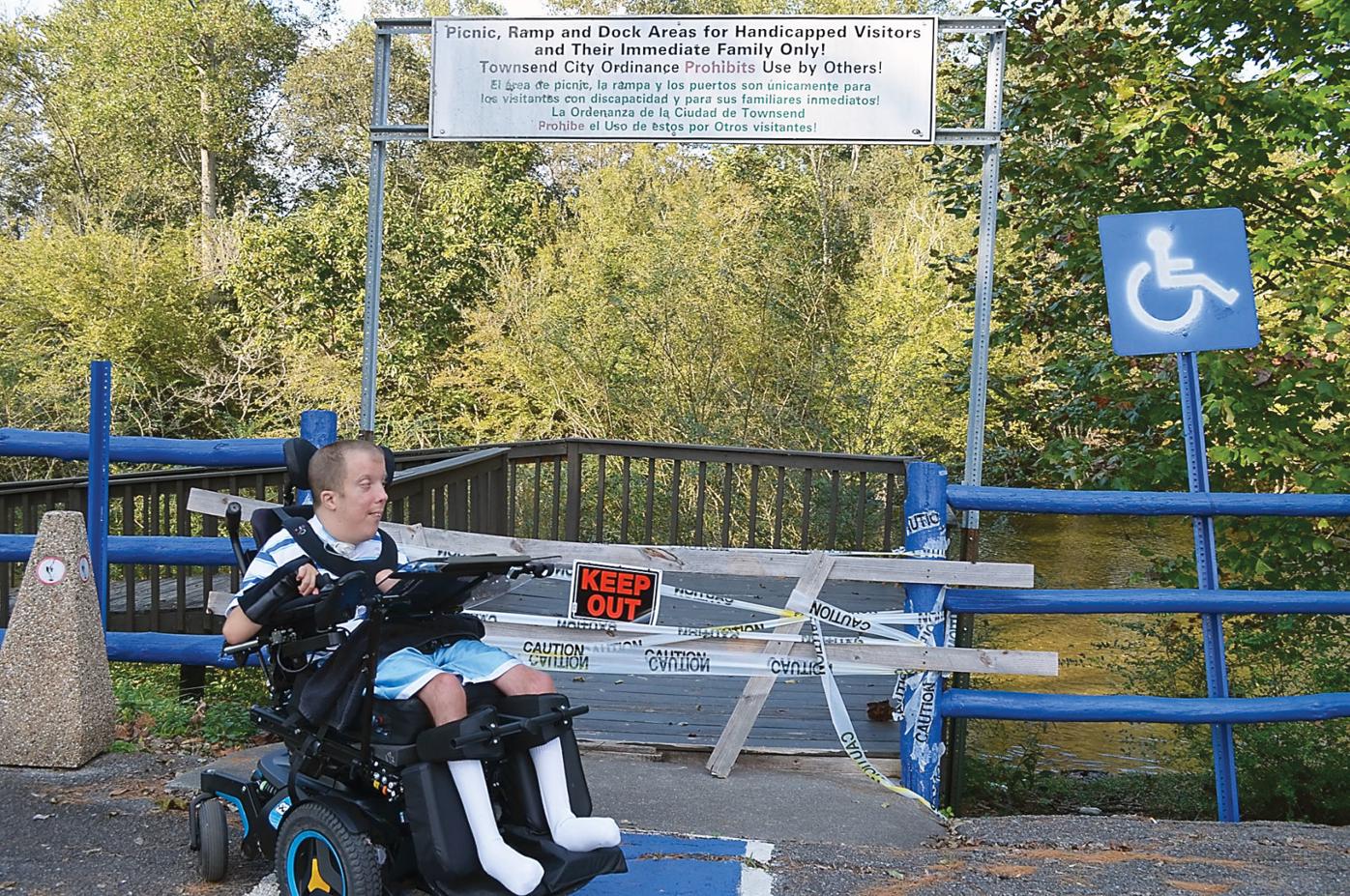 Russell Hogsed and his family have enjoyed outings at this handicap-accessible park in Townsend for years. The ramp where wheelchair-bound people can access the river was closed due to damage weeks ago.

Maryville’s Russell Hogsed is shown in front of the then-closed ramp at the Special People’s Park in Townsend months ago. The park repairs and renovations are complete. He and others can now take the ramp down to Little River to fish.

Russell Hogsed and his family have enjoyed outings at this handicap-accessible park in Townsend for years. The ramp where wheelchair-bound people can access the river was closed due to damage weeks ago.

That’s what Frank Hogsed and his son, Russell, hope to be able to tell people who wonder where they off and disappeared to.

Right now, though, they have to wait on the repair of Townsend’s Special People’s Park, which includes picnic tables for handicapped individuals like Russell, along with a ramp that will allow Russell to wheel right down to the water’s edge.

For the past four months, Russell has been kept away from one of his favorite places in Blount County, where he can touch Little River and feel its gravitational pull. The park is just off East Lamar Alexander Parkway, visible by passersby. Russell is a frequent visitor to the Special People’s Park, which was built 30 years ago by members of the Maryville-Alcoa Civitan Club. Time, erosion and use have rendered it in need of repairs, especially the ramp that leads down to the river. Caution tape sends Russell and others away now.

The major repairs will include hiring a contractor with heavy equipment to build new supports and decking boards, stabilizing the bank and other updates.

But, this family and others are hopeful that in a few months, repairs will be complete and the park open once more. That will happen when the Maryville-Alcoa Civitan Club raises the $12,000 it will cost to make the repairs and also install new ADA-approved picnic tables on-site.

“The older ones are nothing more than concrete blocks,” said Civitan member Howard Yarnell. The cost of the ramp repair is estimated at $10,000 and then $2,000 more for the new tables, he said.

Yarnell has done routine maintenance at the one-acre property in Townsend for years. He said back in 2011, a tree fell across the ramp. A man who said he was a civil engineer came along and agreed to make the repairs.

“He told me, ‘I know a lot of people use this. Some who are supposed to and some who aren’t.’ He did the work to rebuild it.”

There is a city ordinance that states only people with physical or developmental disabilities and their immediate family members are allowed to use the ramp and dock, but over the years that has been ignored. Yarnell said when they get these latest repairs done, they are hopeful the ordinance will be enforced.

This club that has 21 active members is currently in a fundraising campaign to get the needed funds. However, the work already is getting underway with some funds they have been earmarked for the project.

Club member Christy Walsh said she would like to see Blount County citizens come together for a worthy cause.

“What we really want is this community to support the effort,” she said. “This is a community resource.”

There is debate on whether the property was donated at a cost of $1 or if the Civitan Club paid a higher price. That was back in 1984. Yarnell said the Maryville-Alcoa Civitan Club does own the property and feels obligated to see that it remains in good shape for all who are approved to use it.

“We want to have it done as soon as possible,” he said. Cold weather is on its way, but that doesn’t mean people won’t be out there if it’s repaired.

“It can be 60 degrees in February,” Yarnell pointed out.

He has been a member of this club since 1992, but a part of Civitan since 1972, when he was a part of Smoky Mountain Civitan. Yarnell has been president of the Maryville-Alcoa Civitan many times and also governor of the district.

Maryville-Alcoa Civitan meets each week at Parkview Retirement Center in Maryville, and new members are welcome.

Back in 2014, the Special People’s Park was featured on the front cover of Civitan Magazine, the official publication of Civitan International. That year, the park was celebrating its 25th anniversary. Nearly a dozen members of the Maryville-Alcoa Civitan Club came together that summer to clean and refurbish the park. They cleaned, painted and pruned. In addition, boards were replaced on the ramp and fence.

The first of its kind

In fact, this is the 30th anniversary of the park, which was built in 1988. The ramp was added in 1991. The park was the first handicap-accessible roadside park in Tennessee.

Russell is the son of Frank and Shirley Hogsed. He is a 2004 graduate of Maryville High School and attends The Gate (Gateway to Independence) in Maryville. The Gate is a day center for young adults with developmental and learning disabilities. His parents helped start it back in 2004. The location is Sycamore Tree United Methodist Church, 1830 Clydesdale St., Maryville.

Frank said Russell has loved outings to the park over the years. The family packs up a picnic lunch and heads that way. Several friends at The Gate have spent time at the park, too. It is well used by Russell’s community, his dad said.

“He likes to zigzag down the ramp and to the landing and just sit and watch the water,” Frank said. “But he and I have a goal. When it all gets repaired, we are going to go fishing. Russell will get to hang his fishing pole over the rail and fish. That’s what we are going to do.”

The Maryville-Alcoa Civitan Club has launched a campaign to raise $12,000 to repair the Special People's Park in Townsend. The club built the park 30 years ago. Major repairs are needed to the ramp, deck, etc.