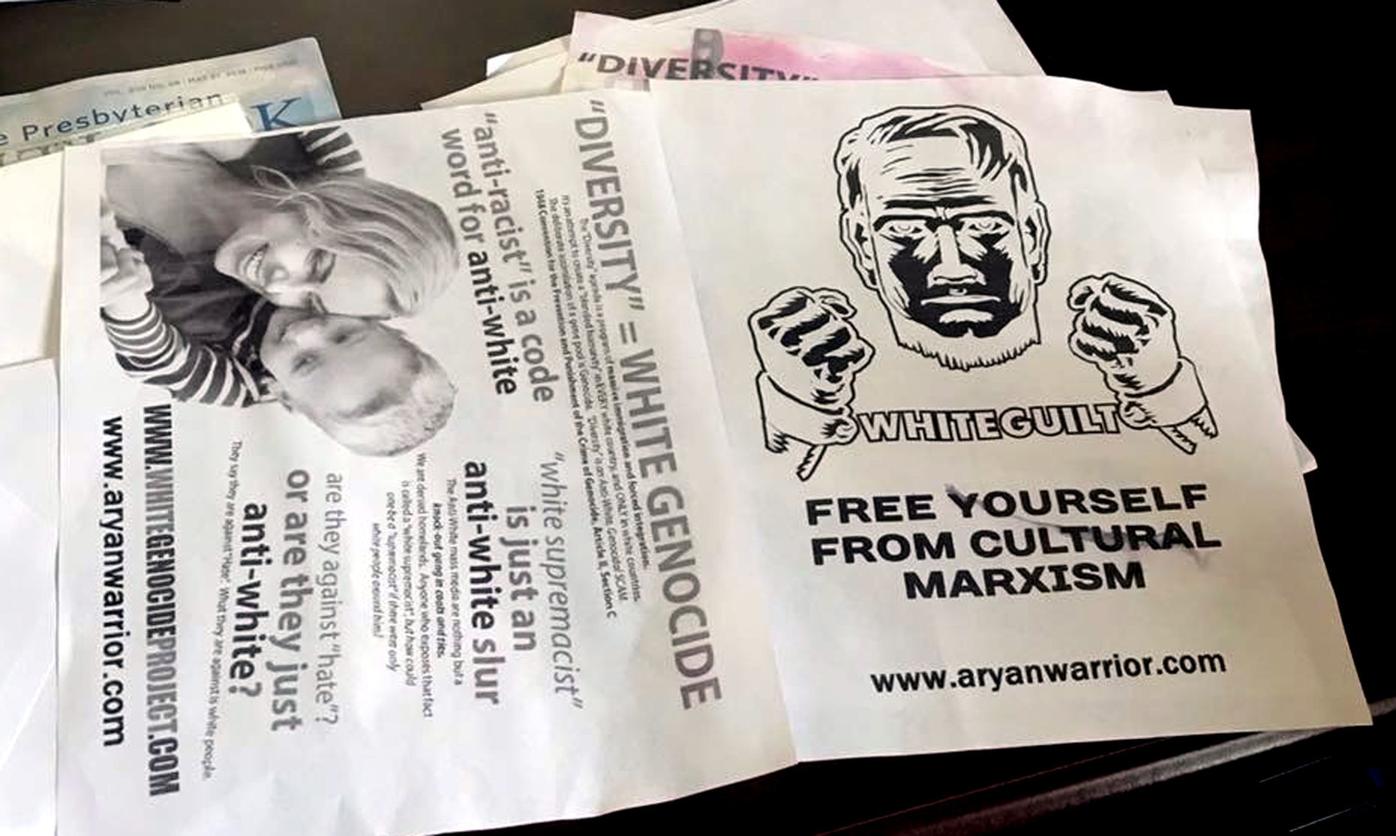 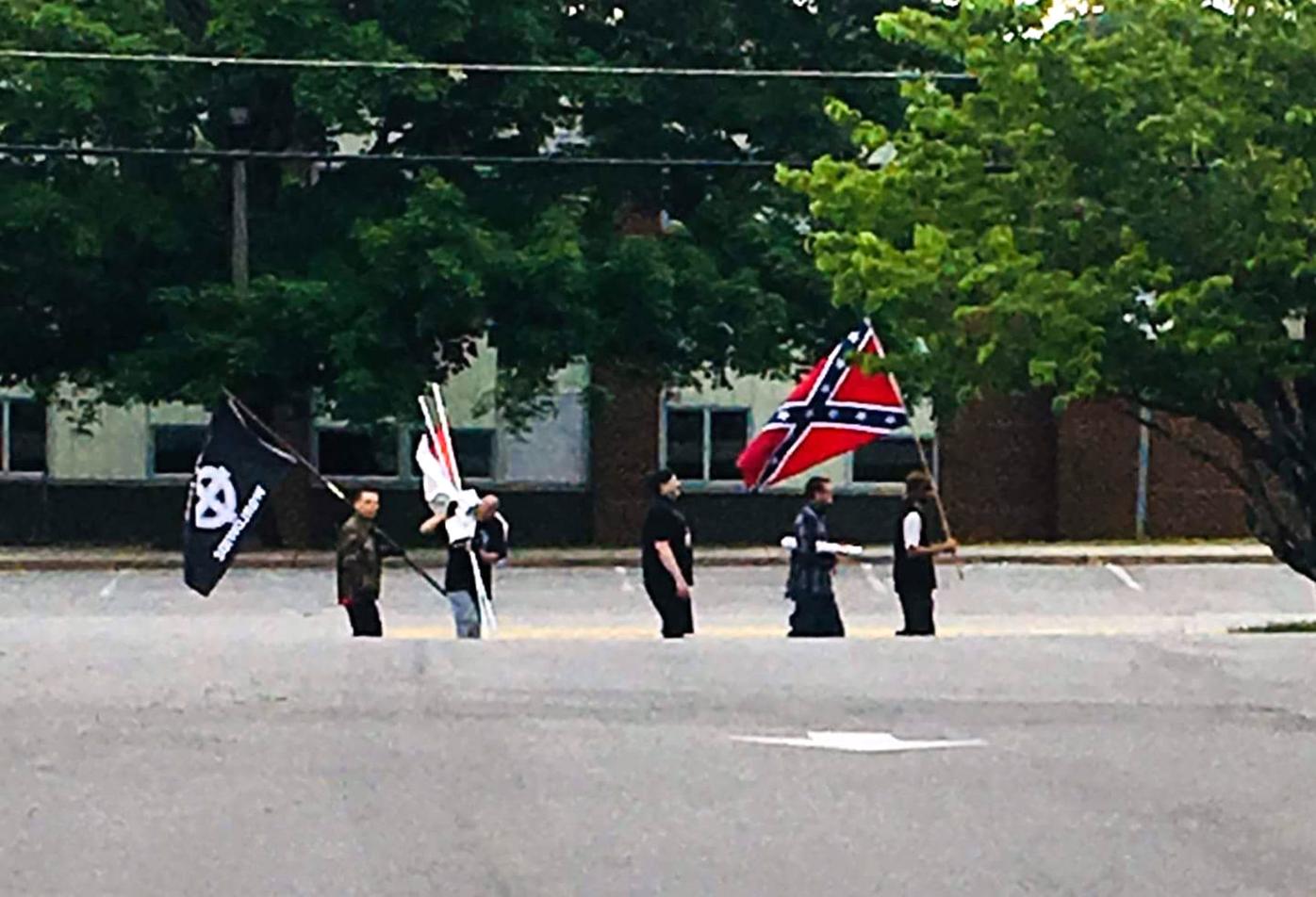 A group of white supremacists protest Sunday night in front of Maryville Junior High School. Author David Billings was delivering a presentation on racism across the street at First United Methodist Church. 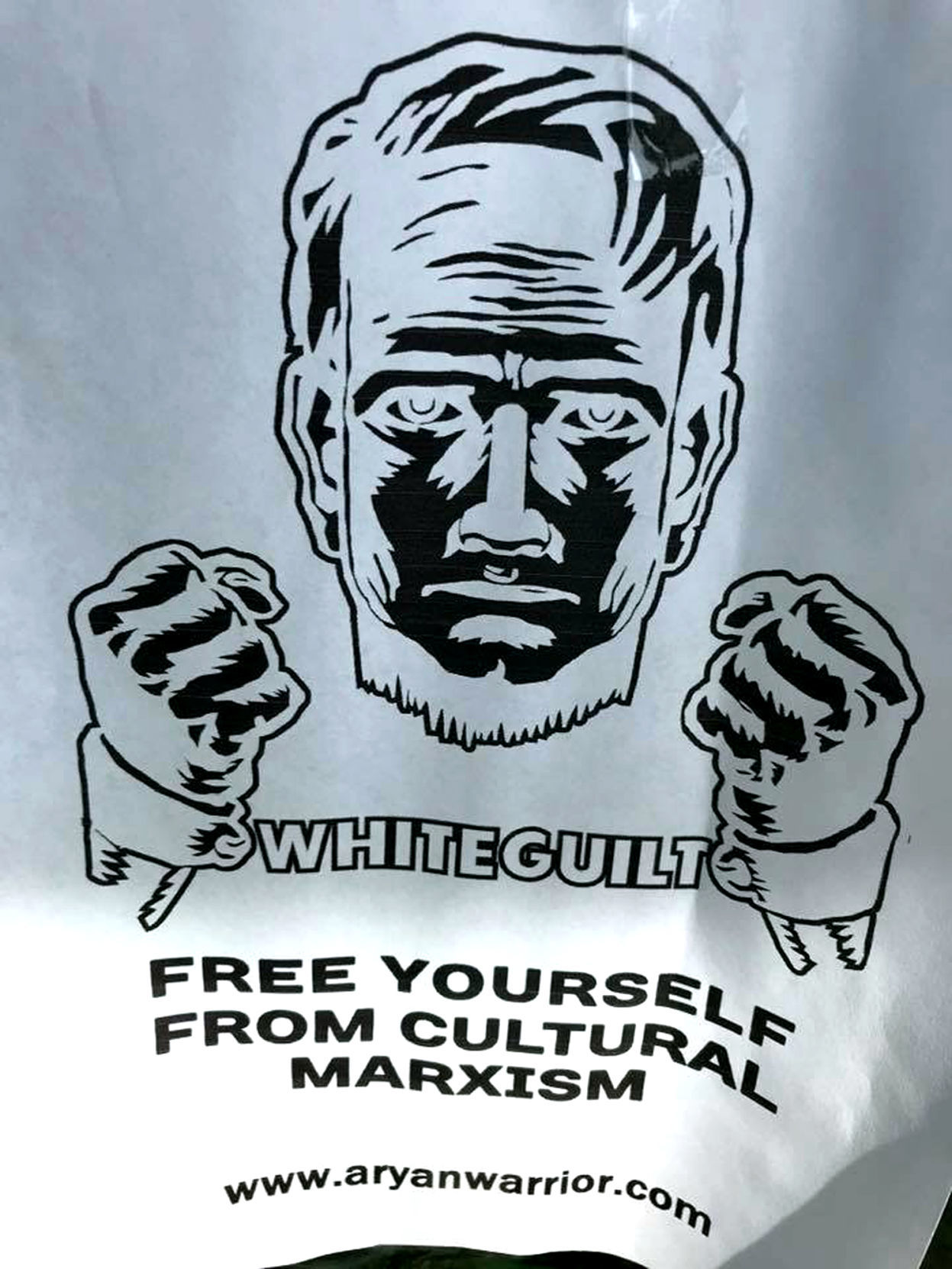 A group of white supremacists protest Sunday night in front of Maryville Junior High School. Author David Billings was delivering a presentation on racism across the street at First United Methodist Church.

In apparent retaliation for hosting an anti-racist author and historian, a group of white supremacists organized a protest Sunday outside a Maryville church and posted fliers containing racist rhetoric at an area business and church.

All three locations were targeted by white supremacists on Sunday. However, law enforcement has not determined whether the same group or individuals were responsible.

Fliers espousing white supremacist rhetoric were discovered Sunday morning at Highland Presbyterian Church and Southland Books and Cafe. A web address on the bottom of the flier directed users to a gateway to the ShieldWall Network, a blog run by Billy Roper, whom the Southern Poverty Law Center lists as the “uncensored voice of violent neo-Nazism.”

Lisa Misosky, co-owner of Southland Books and Cafe, discovered fliers posted on the business’s doors and windows when she arrived Sunday morning. She later filed a Maryville police report upon the advice of counsel and will contact the Anti-Defamation League and Southern Poverty Law Center as well.

Misosky said she was deeply saddened by the incident.

“It’s nice to think of Maryville and Blount County existing in a bubble untouched by the outside world, but today has shown that’s clearly a myth. White supremacists protested in Knoxville earlier this year. Now, they’re here.”

A group of protesters assembled after 5 p.m. Sunday in front of Maryville Junior High School across from First United Methodist Church, said the Rev. Catherine Nance, the church’s senior pastor. Billings was the keynote for a “Conversation Matters” presentation that was held 5-7 p.m.

Officers were dispatched at about 5:30 p.m. to Montvale Station Road and met with a group of eight people, said Maryville Police Chief Tony Crisp. Since they had fewer than 10 protesters, he said that they were not legally required to obtain a permit.

Officers advised the group about protesting rules, Crisp said. They instructed them to not impede the flow of traffic and to stay off the church’s property.

No fliers were posted at First United Methodist Church, Nance said. She also emphasized that guests didn’t feel “afraid or threatened” by the group.

Book about 400 years of racism

Misosky and Nance said they believe that Billings’ book and his appearances this weekend incited the group. “Deep Denial” was published in 2016 and won the 2017 Indie Book Award for Current Events/Social Change.

An anti-racist historian, educator, minister and community organizer, Billings was raised in small towns in Mississippi and Arkansas. He became a racial activist while at the University of Mississippi in the 1960s. His experiences led him to become an ordained United Methodist minister.

Billing’s book documents the 400-year racialization of the United States and how people of European descent came to be called “white.” Billings focuses on the deeply embedded notion of white supremacy and tells why, despite the civil rights movement and a black president, we remain, in the author’s words, “a nation hard-wired by race.”

The author tells stories from his personal life, beginning with his white, working-class boyhood in Mississippi and Arkansas. He covers the origins and evolution of white supremacy from 17th century Virginia through World War II in the first part of the book. Part II focuses on the civil rights movement and how it emerged in the post-WWII era. The epilogue reveals strategies for dismantling white supremacy and “undoing” racism in America.

Billings’ appearances were hosted by CDJ Media Productions, a group comprised of Dorothy Kincaid, Charles Pride and Jo Davenport. They have spent years documenting people for a project they call “Blount County Black History — As Told By Those Who Lived It — Then and Now.”

“Bookstores have been targeted for centuries,” Misosky said. “We are places where people can meet and exchange ideas. We offer that semblance of free thought. I can understand why we were targeted, but I don’t understand why anyone would target a place of worship. It seems like the most uncharitable and unChristian thing to do. Churches are supposed to be sanctuaries.”

Nance wasn’t as offended by the protest. “We appreciate them being peaceful protesters, and I found the whole thing to be rather ironic since it’s Memorial Day weekend. We’re honoring the men and women who died for our freedoms. They have the freedom to do what they did.”

However, community activists were not as charitable and were disappointed by the events.

“It’s disheartening to see this kind of hate expressed in our county,” said Nina Gregg, who works with Blount County’s chapter of SURJ (Standing Up for Racial Justice). “It’s important to acknowledge it’s here, not deny it. It’s also important for white people who oppose this behavior and rhetoric to be visible and vocal. We believe in the humanity and dignity of everyone.”