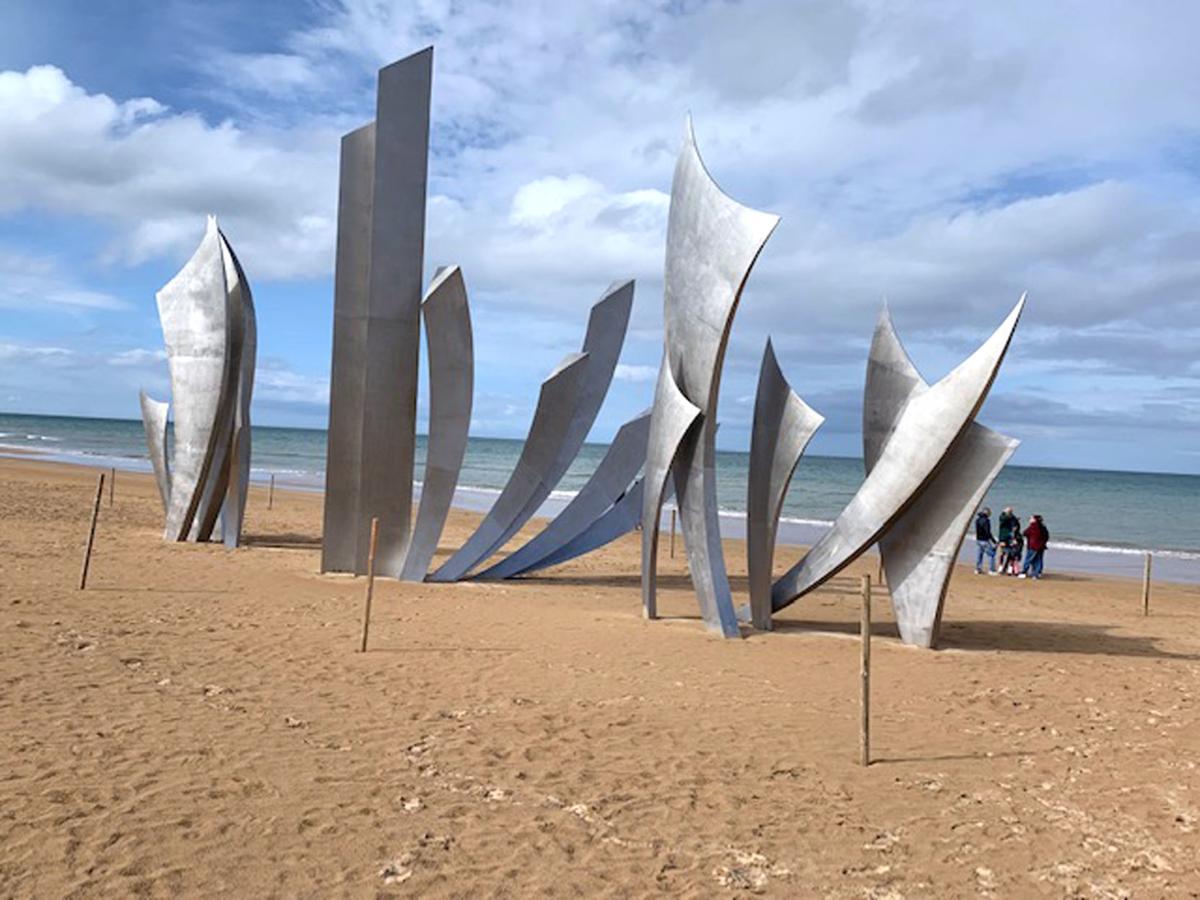 The Omaha Beach war memorial is titled “Les Braves.” The 14 stainless-steel columns constructed in 2004 by French sculptor Anilore Banon represent three elements: the Wings of Hope, Rise Freedom and the Wings of Fraternity. 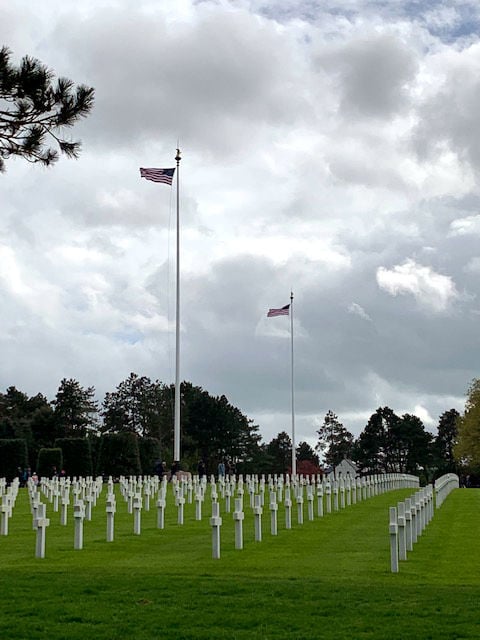 The American Cemetery and Memorial in Colleville-sur-Mer overlooks Omaha Beach and is the largest allied cemetery in Normandy. The 172-acre cemetery contains the remains of 9,387 U.S. soldiers — each marked with a marble headstone. 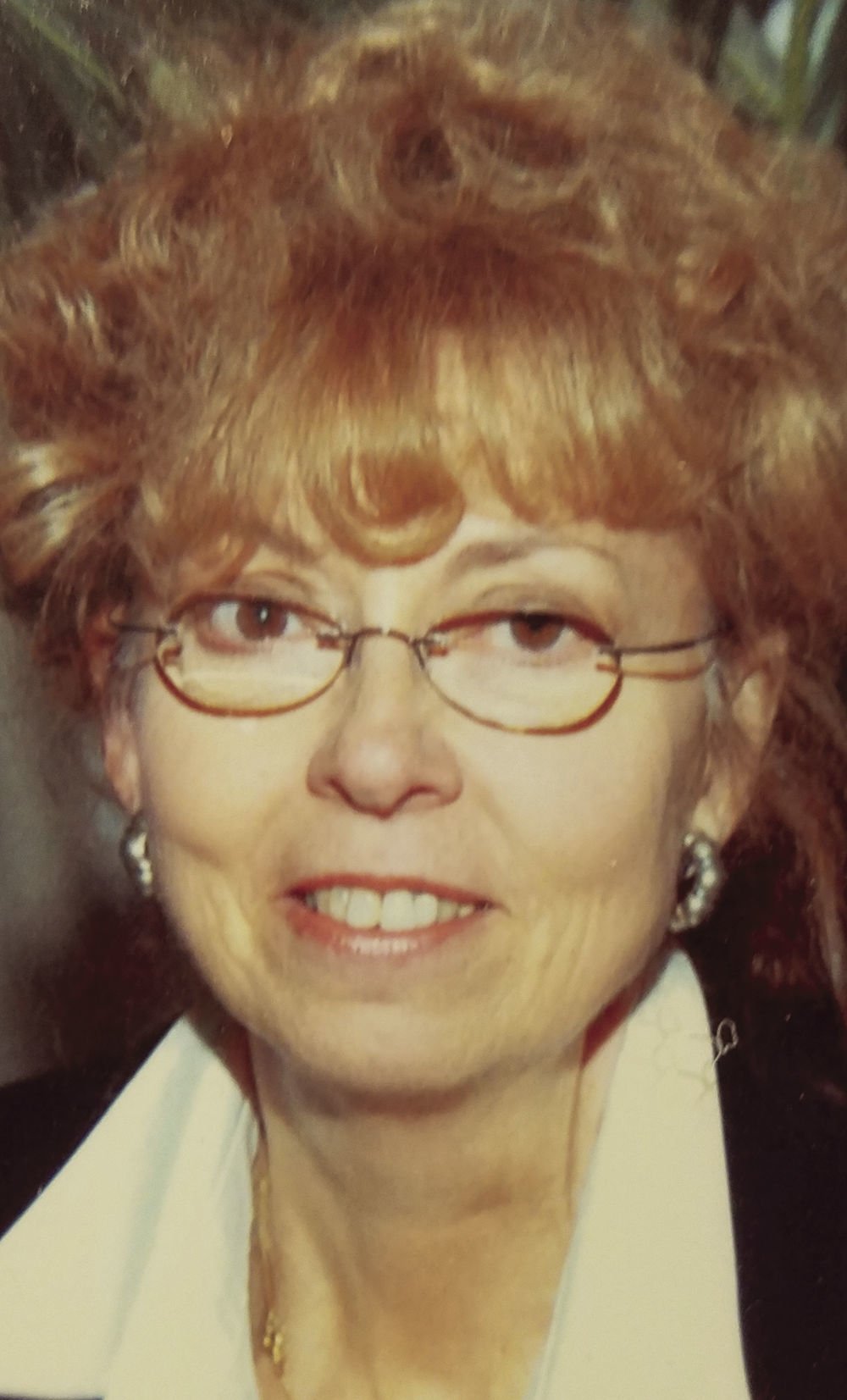 The Omaha Beach war memorial is titled “Les Braves.” The 14 stainless-steel columns constructed in 2004 by French sculptor Anilore Banon represent three elements: the Wings of Hope, Rise Freedom and the Wings of Fraternity.

The American Cemetery and Memorial in Colleville-sur-Mer overlooks Omaha Beach and is the largest allied cemetery in Normandy. The 172-acre cemetery contains the remains of 9,387 U.S. soldiers — each marked with a marble headstone.

The Normandy beaches had been on my travel bucket list forever. Last summer, hubby and I were planning a Viking River Cruise and decided that we had put the Normandy trip on the back burner far too long. It was either Normandy in 2019 or another year of listening to me whine about not marking off a special destination while our passports had not expired and we could still put our shoes on the right foot.

We talked to our traveling buddies from Florida and they were “in.” The four of us signed up for the Viking Elbe River Cruise then extended our trip an additional eight days.

The river cruise started in Prague, Czech Republic, and ended in Berlin, Germany. After two days of touring Berlin, we boarded various trains and worked our way across Germany. We took a train from Paris south to Roeun, where we rented a car and then drove to Bayuex — a good location for accessing all the Normandy invasion beaches.

The rental car was reserved before we left the U.S. and we had 10-day Eurorail passes, but that was the extent of our pre-reservations. We decided since April was not full-blown tourist season, we would take our chances on booking hotels after we arrived in the land of flakey croissants. We went online to book lodging, to find directions to attractions and to guide us back to civilization when we took the wrong gravel road.

Our first full day in Bayeux, we saw the famous Bayeux tapestry — a 224-foot embroidered record of William the Conqueror’s invasion of England at the Battle of Hastings in 1066. The linen and wool masterpiece probably was completed about 1077 and has survived. After viewing the tapestry and the museum, we headed to Omaha Beach.

The afternoon was chilly and threatening grey clouds hung on the horizon, but the skies were mostly clear. The chill did not interfere with two small children playing in the sand at the edge of the water or the young couple strolling hand-in-hand across the sand.

I found a seat on a stone wall that overlooked the beach and gazed out as the waves rolled in off the English Channel. I often read from the World War II genre and tried to imagine the chaos and tragedy of this place 75 years ago today. It is hard to think of the young 18- and 19-year-old soldiers who jumped off rocking Higgins’ boats into choppy waves and attempted to swim, crawl and claw their way through the indescribable hell that was Omaha Beach.

They had been told that the “kill” rate would be high and their chances of survival slim, but still they put duty and country above self and took the beach at “all cost.”

It was humbling to realize that those men we now called the Greatest Generation were willing to sacrifice their lives to help stop Nazi aggression; it was also inspiring to walk through the museums and exhibits describing their unrelenting courage, and it was haunting to walk the grounds of the American Cemetery. Almost 10,000 shiny white crosses in perfectly symmetrical rows stretched as far as the eye could see.

We lose more than 300 World War II veterans daily; I wonder who will remember their sacrifice and tell their stories? If a trip to Normandy is not in your budget, consider visiting some of the excellent museums in the United States. Start with the Museum of East Tennessee History in downtown Knoxville or take a short drive north on Interstate 81 to Bedford, Virginia, to see the National D-Day Memorial and learn about the “Bedford Boys” — 19 young men from the small town of Bedford, population 6,000, who died on D-Day. Four others from Bedford would die later in the invasion.

If you have a bit more time and dollars, plan a trip to New Orleans for a visit to the National WWII Museum.

Faye Hochnedel Greenwood is retired from the University of Tennessee Extension Service. She and her husband, “Moe” Greenwood, have operated Seymour’s MoeFaye Travel Inc. for 15 years.