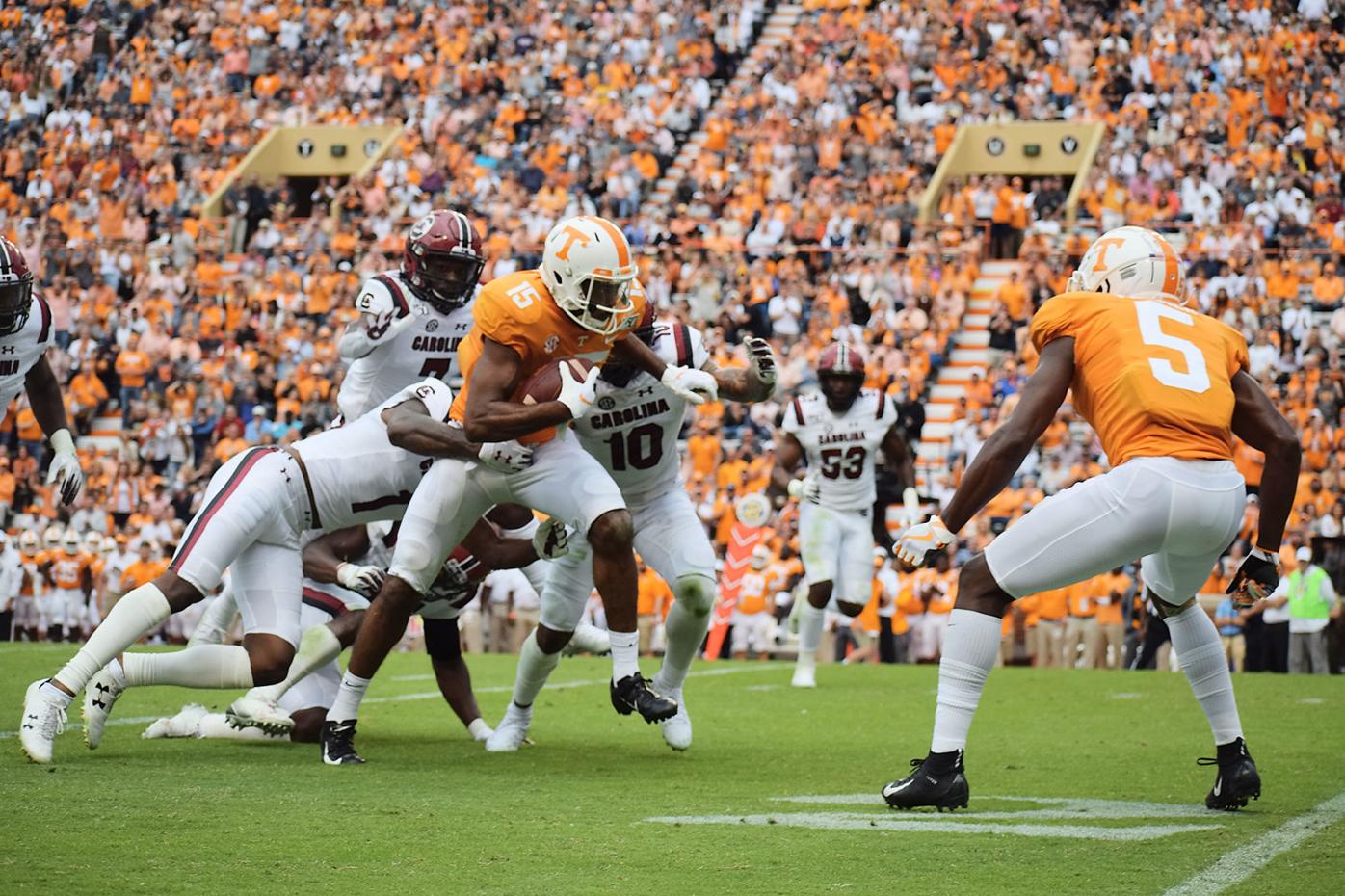 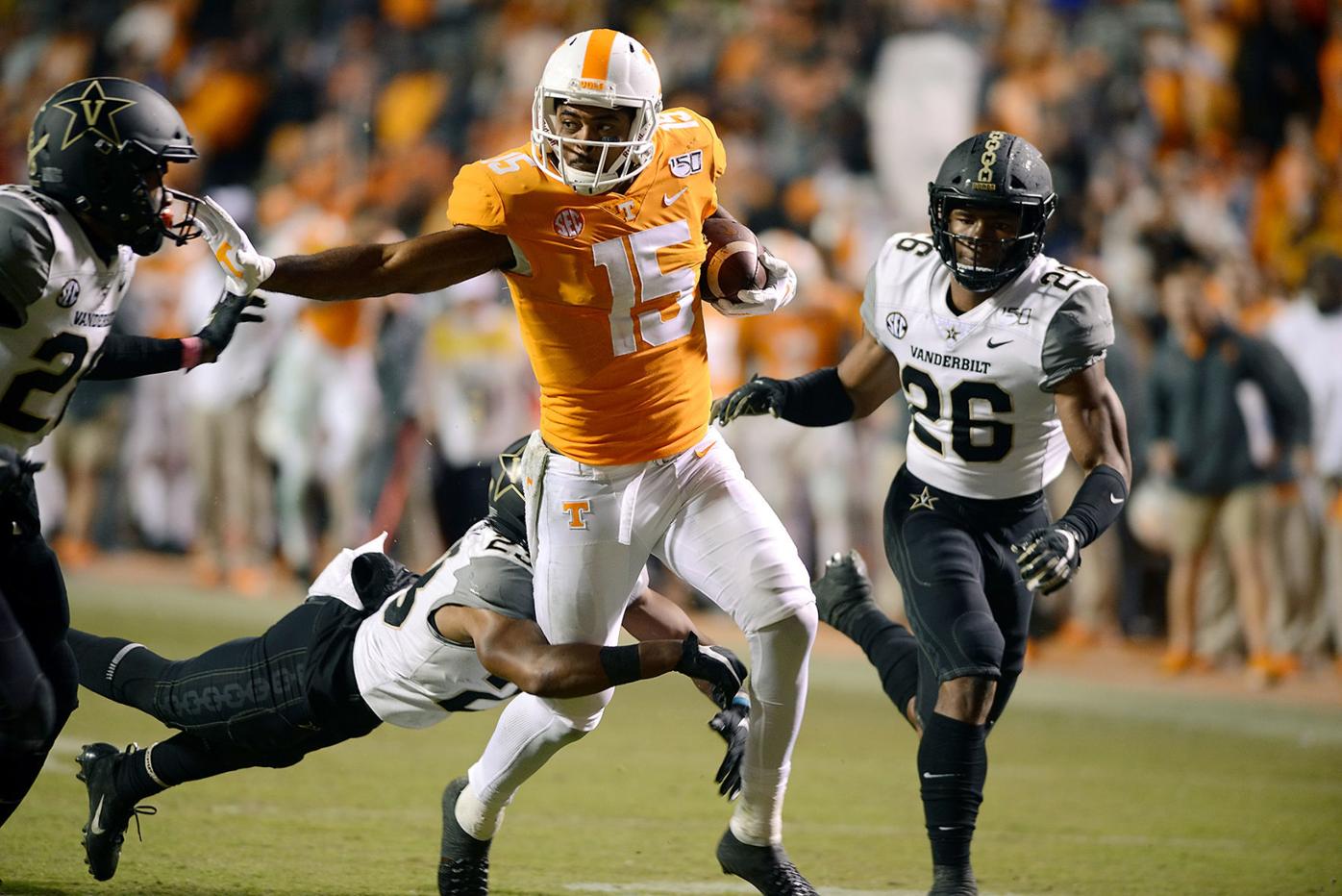 Jauan Jennings (15) rumbles through Commodore defenders inside the five yard line to set up the Vols for a fourth quarter touchdown game against Vanderbilt at Neyland Stadium in November 2019. 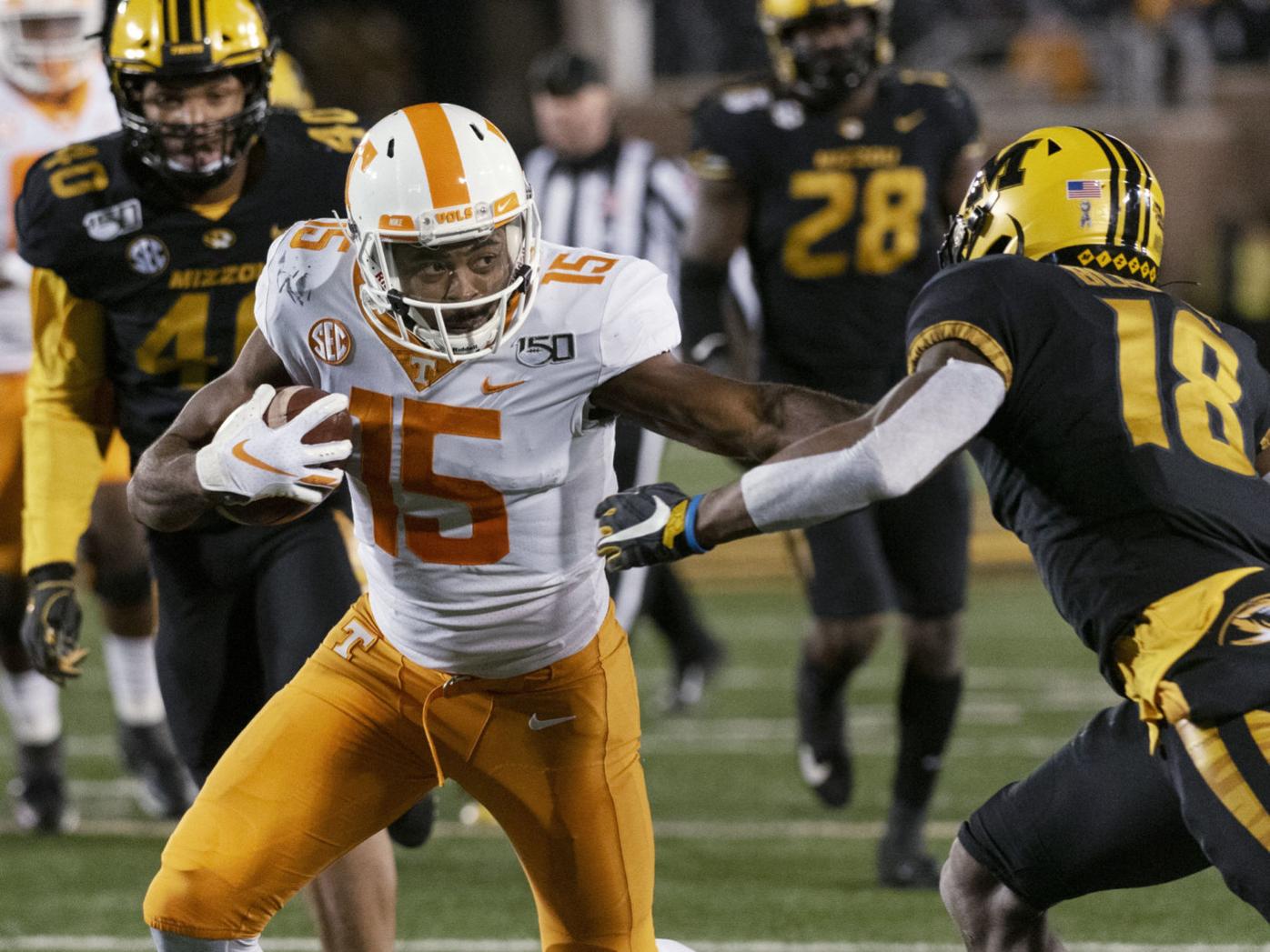 Jauan Jennings (15) rumbles through Commodore defenders inside the five yard line to set up the Vols for a fourth quarter touchdown game against Vanderbilt at Neyland Stadium in November 2019.

Shortly after being picked by the San Francisco 49ers in the seventh round of the NFL Draft on Saturday, Tennessee wide receiver Jauan Jennings did a virtual interview with media that kept getting interrupted.

With the news still fresh in the minds of his friends and family, Jennings received continuous phone calls and text messages as he tried to answer questions. It didn’t matter who was reaching out to him, he ignored the calls — even the Vols boss whose arrival in Knoxville coincided with Jennings’ rise to being an NFL-caliber player.

“(This one) is my head coach in Tennessee, coach (Jeremy) Pruitt,” Jennings told the media. “I’m declining him. I feel bad about it.”

Luckily for Pruitt, Jennings never felt bad about inflicting a different kind of pain on Tennessee’s opponents last season. In fact, that’s the reason the 49ers liked him so much.

Jennings caught 59 passes during the 2019 season, and it was rare for him to go more than a few receptions without running over or through a defender on his way to extra yards. According to Pro Football Focus, Jennings led all NCAA wide receivers with 30 broken tackles last season.

One highlight came against South Carolina when he caught a pass in the open field and cut inside the first defender while swiping him to the ground. While still stumbling from the contact, he took on another defender from the inside and ran through him. Finally, a third defender grabbed him from behind on the 5-yard line, but by then it was too late.

Jennings finished the play with a 48-yard touchdown — the last 30 yards of which were more heart and physicality than anything else.

Later in the South Carolina game, he caught a pass over his shoulder in the back of the end zone and held on after a monster hit from a defender sent him flying into a crowd of photographers and a wall.

“When you watch his tape, you know a lot of people in this league are going to love him,” said 49ers coach Kyle Shanahan, who took his team to the Super Bowl last season. “He was one of our most favorite guys to watch. He’s a bulldog. He usually plays in the slot. I feel like he could probably play linebacker if he wants.

“He’s willing to fight everybody out there. He fights for yards. He makes plays, and there’s a mindset to that guy that you don’t have to talk to him to hear about. You can watch him on silent tape and you know what type of football player he is.”

Jennings doesn’t possess the top-end speed to threaten a defense vertically, and his adjustment to press coverage could use some work.

His upside on the other hand stems from that physicality and an above-average level of toughness. He makes contested catches and is great at getting open against soft coverage.

Shanahan acknowledged that Jennings has work to do if he is going to make the team. Part of that stems from how deep the 49ers are at wide receiver, especially when considering that tight end George Kittle is the team’s top receiving threat.

Any player picked in the seventh round has an uphill fight when it comes to making an NFL roster, but Jennings might have a better chance than most based on his playing style alone.

“I’m definitely going to bring that physicality to every game,” Jennings said. “That’s always been a part of me. That’s not just in the blocking game because I do love to block but also when it comes to me catching the ball.

“I’m a great receiver after the catch. I take pride in that and I believe in myself to be able to do that at a high level.”