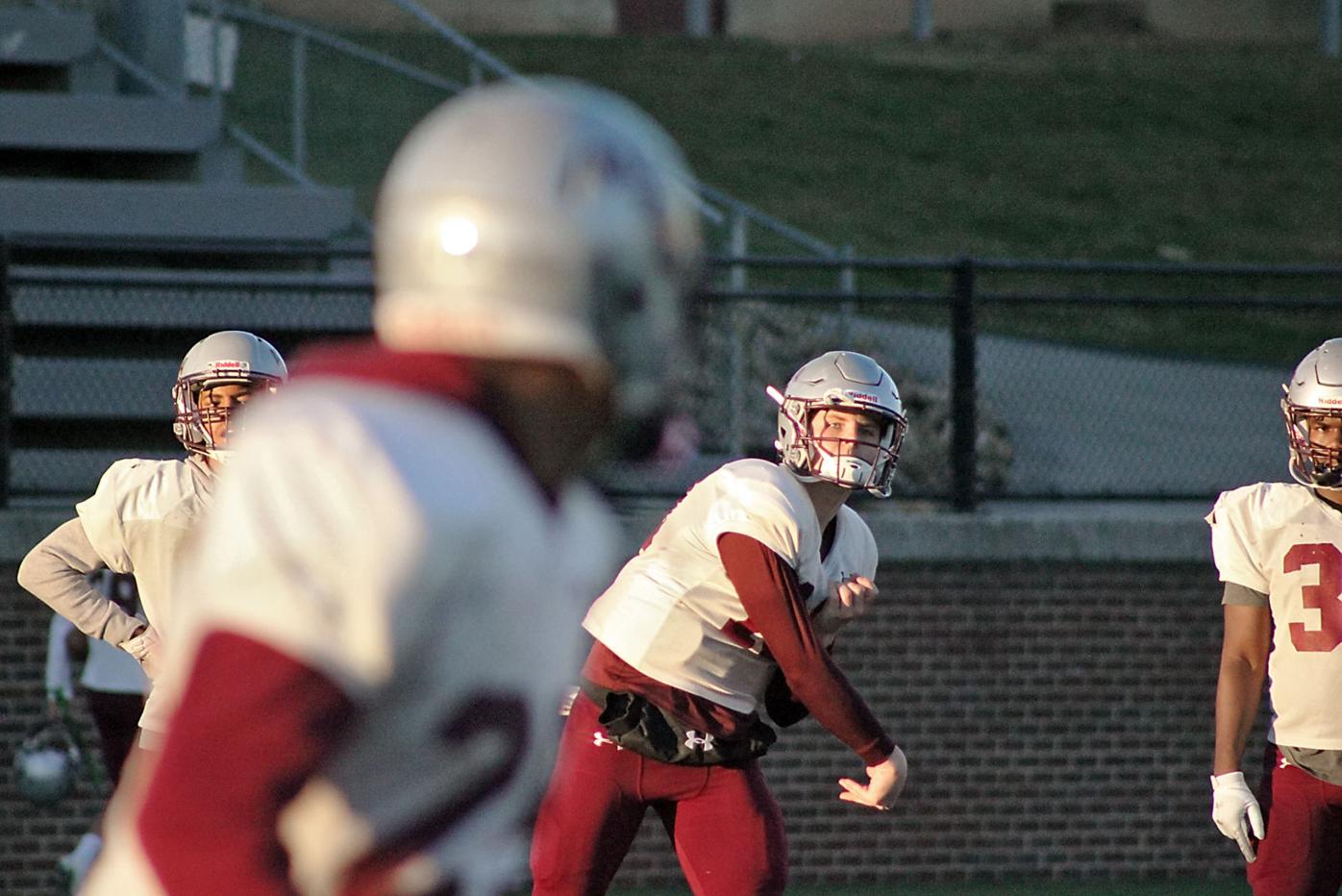 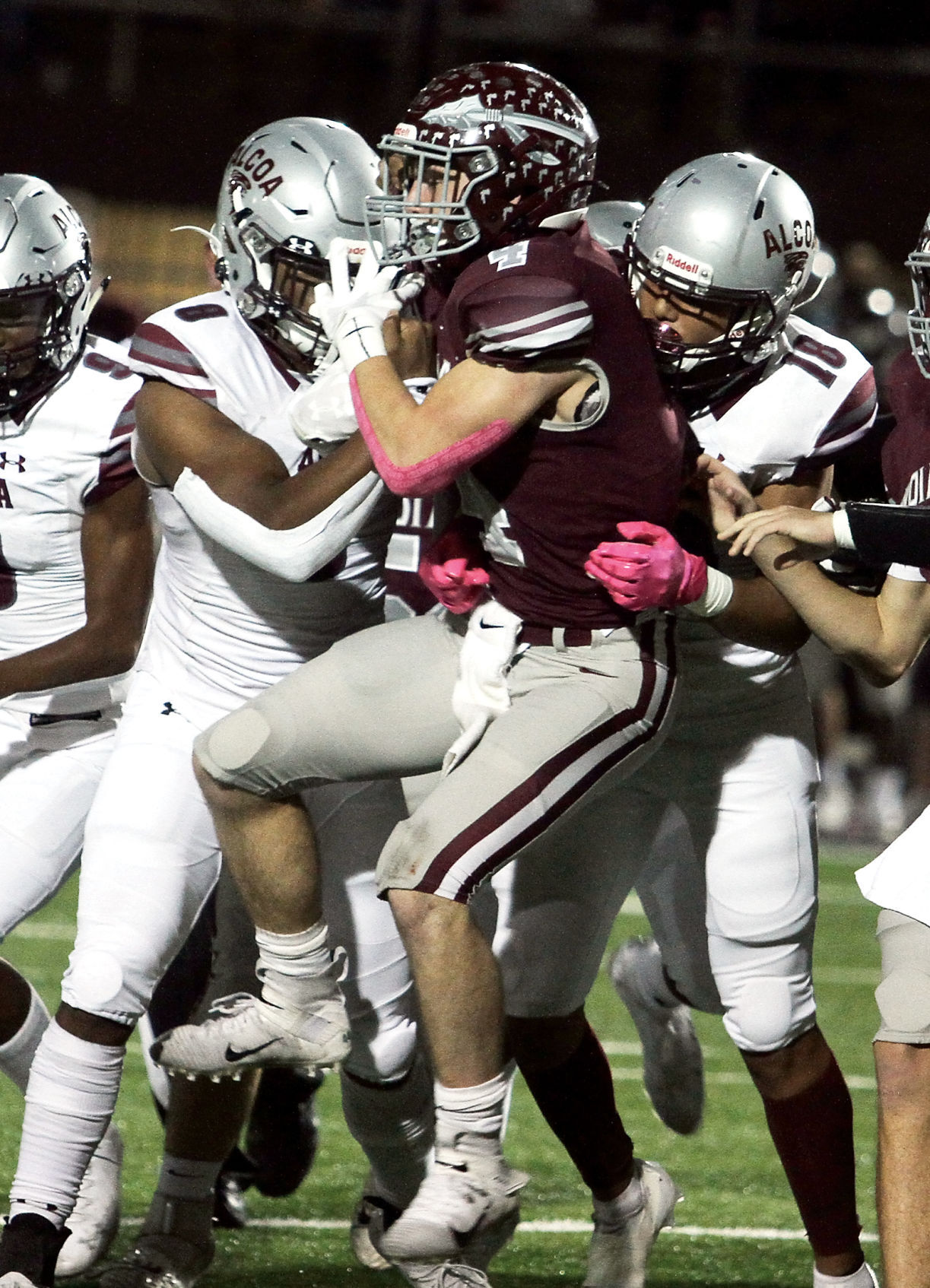 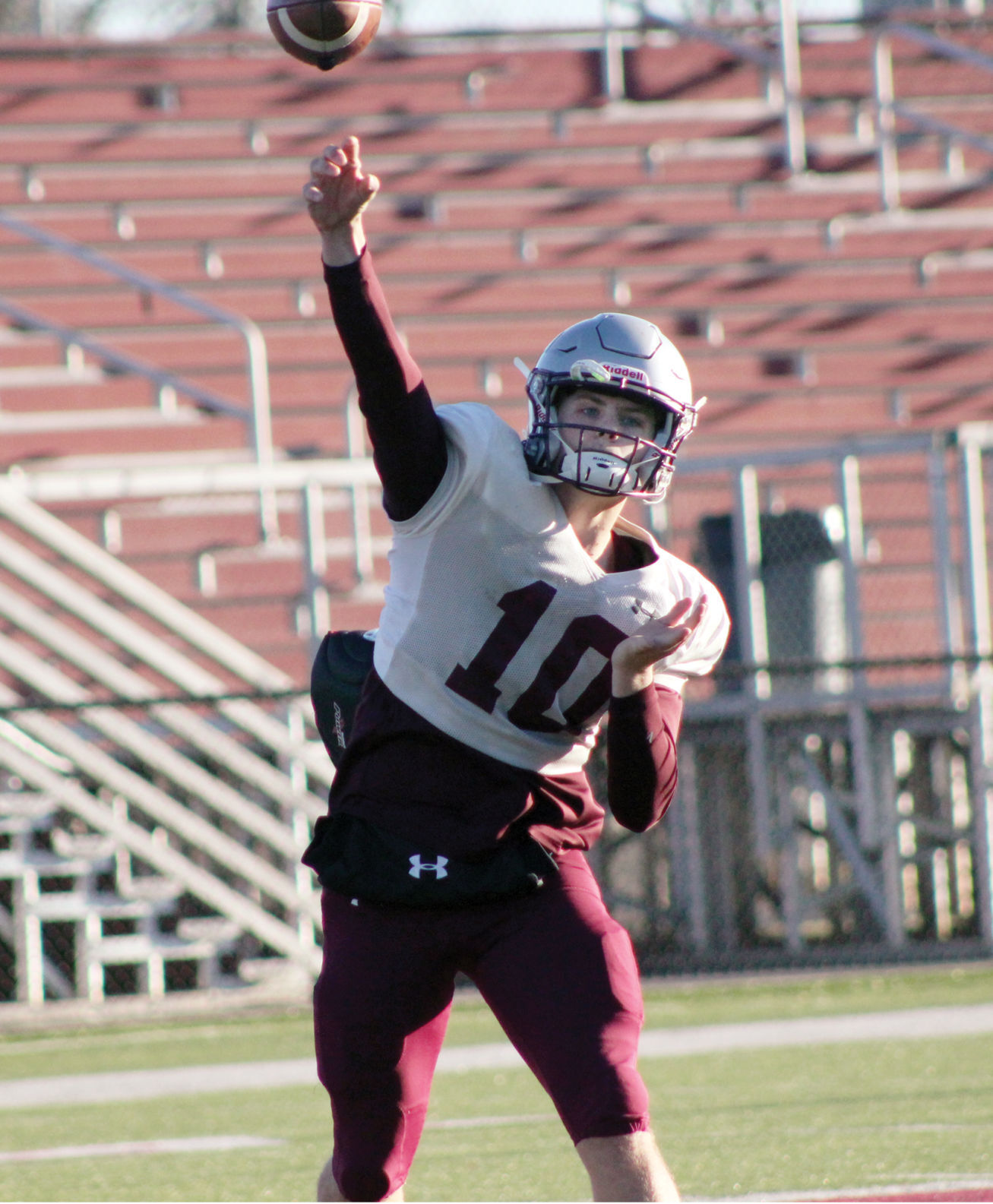 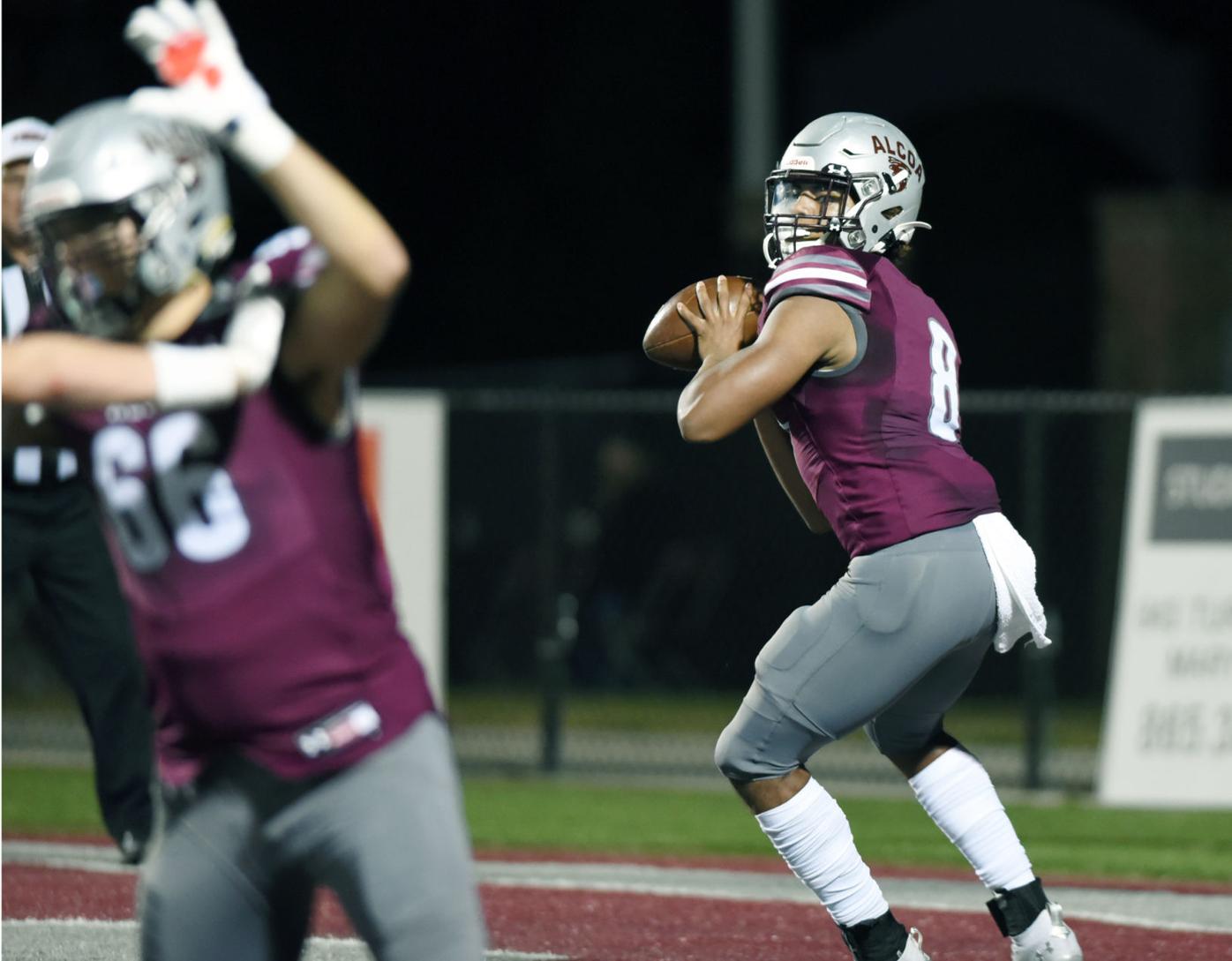 Alcoa’s Camden Burden sits in a clean pocket and looks downfield for a receiver in Friday night’s playoff win over Johnson County. 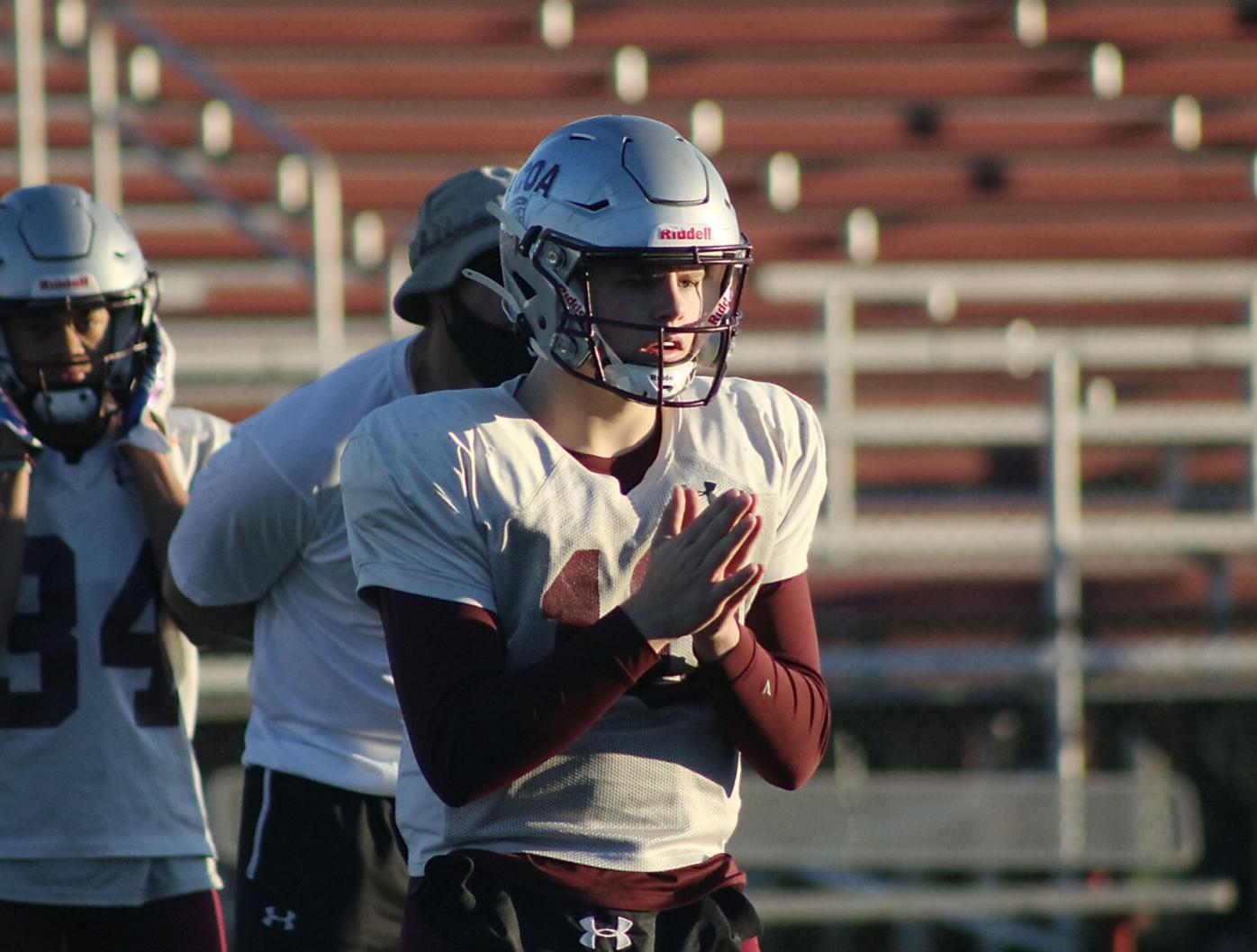 Alcoa quarterback Caden Buckles readies for a snap during the Tornadoes’ practice on Tuesday.

Alcoa’s Camden Burden sits in a clean pocket and looks downfield for a receiver in Friday night’s playoff win over Johnson County.

Alcoa quarterback Caden Buckles readies for a snap during the Tornadoes’ practice on Tuesday.

Alcoa senior Camden Burden has been counting down the days until Caden Buckles would be eligible to suit up for the Tornadoes’ football team.

A junior quarterback, Buckles had to sit out one calendar year after transferring from Knoxville Catholic to Alcoa ahead of the season. Burden — who has been starting at quarterback for the Tornadoes in the meantime — is thrilled to relinquish his role as one of Alcoa’s signal callers.

“He’s a different kid that didn’t really want to play quarterback,” Alcoa coach Gary Rankin said of Burden. “You don’t see many of those. It’s like people who don’t want to be the lead singer in a group.”

Finally, the moment both Buckles and Burden have been eagerly awaiting has arrived. Buckles became eligible on Monday, and he will play his first game as a Tornado on Friday night against Gatlinburg-Pittman in the Class 3A quarterfinals.

Buckles is slated to split time with sophomore Zach Lunsford, who is coming off a big game against Kingston in which we threw for three touchdowns and more than 200 yards. Burden will return to defensive back, and he wouldn’t have it any other way.

“It’s great for him to get back on defense where he wants to be,” Buckles said. “I’m very happy I finally get to play football again. Everybody is finally becoming a unit as we get closer to the state championship game.”

Buckles said he chose to transfer to Alcoa for the program’s winning mentality. The Tornadoes are three victories away from notching their sixth straight state championship and 19th overall — the most of any Tennessee program.

Buckles has had to experience Alcoa’s success from the sidelines for the last three months. He spent that time familiarizing himself with the team’s system and players while helping to coach the other quarterbacks.

“He practices well, he’s stayed engaged the whole time, and I give him credit for that,” Rankin said. “He’s a great teammate — kids have confidence in him, so we feel good about both him and Zach.”

Buckles began playing football at age 7, starting out as a wide receiver and running back. He transitioned to quarterback several years later when he realized he had a knack for seeing the field and staying composed under pressure. He also enjoyed the leadership aspect of the job.

Buckles is eager to kick off this new chapter of his career, joining Lunsford at the helm of Alcoa’s offense.

“I came to the right place, obviously,” Buckles said. “I love the guys — it’s a great team. It’s just everything I could have asked for.”

Burden also transferred to Alcoa ahead of his junior year in 2019. He had spent the two years prior playing quarterback at Sevier County, where he quickly emerged as a rising star.

“Two years ago, if he wanted to be, he’d be the starting quarterback here, right now,” Rankin said of Burden. “He’d be one of the best in the state — there’s no doubt about that. He’s one of the best athletes we’ve got.”

But Burden has always preferred playing defense. When he arrived at Alcoa, he told Rankin he’d rather not play quarterback, but he’d do so if that’s what the Tornadoes ever needed.

That’s because Burden has always been a team player — and a modest one at that.

“I was quarterback, but I wouldn’t really call it quarterback,” Burden said of his years at Sevier County. “I was really a running back because I was running for my life back there.”

Fortunately for Burden, the Tornadoes were set on the quarterback front in 2019 with then-junior Sam Vaulton, who completed 84-of-125 passes for 1,435 yards and 21 touchdowns.

Burden was key for the Tornadoes on the other side of the ball last season. He won BlueCross Bowl MVP honors in their 27-0 championship win over Pearl-Cohn after logging eight total tackles (three for loss), two sacks and two quarterback hurries.

Burden finished with 90 total tackles, 13 tackles for loss and three sacks. But when Vaulton transferred from Alcoa to a school in California ahead of this season, Rankin turned to Burden to help fill his shoes.

“I was willing to do anything for the team,” Burden said. “Now, it’s time for (Buckles) to take over. I just know he’s going to do big things, especially these next three games.”

And the rich keep getting richer...