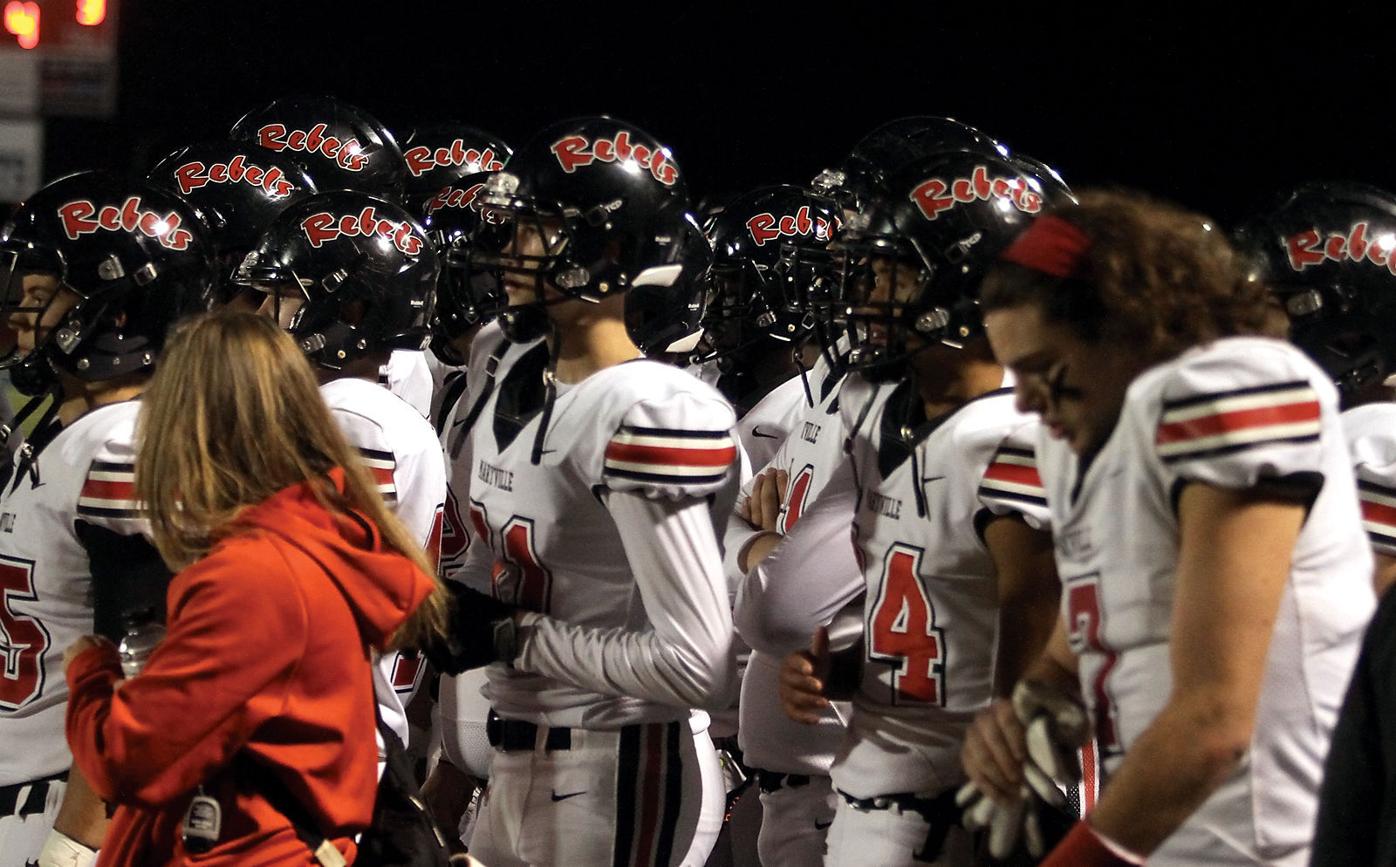 The Maryville football team watches as Oakland takes a 35-0 lead on Nov. 27 in the Class 6A semifinals at Ray Hughes Stadium in Murfreesboro. 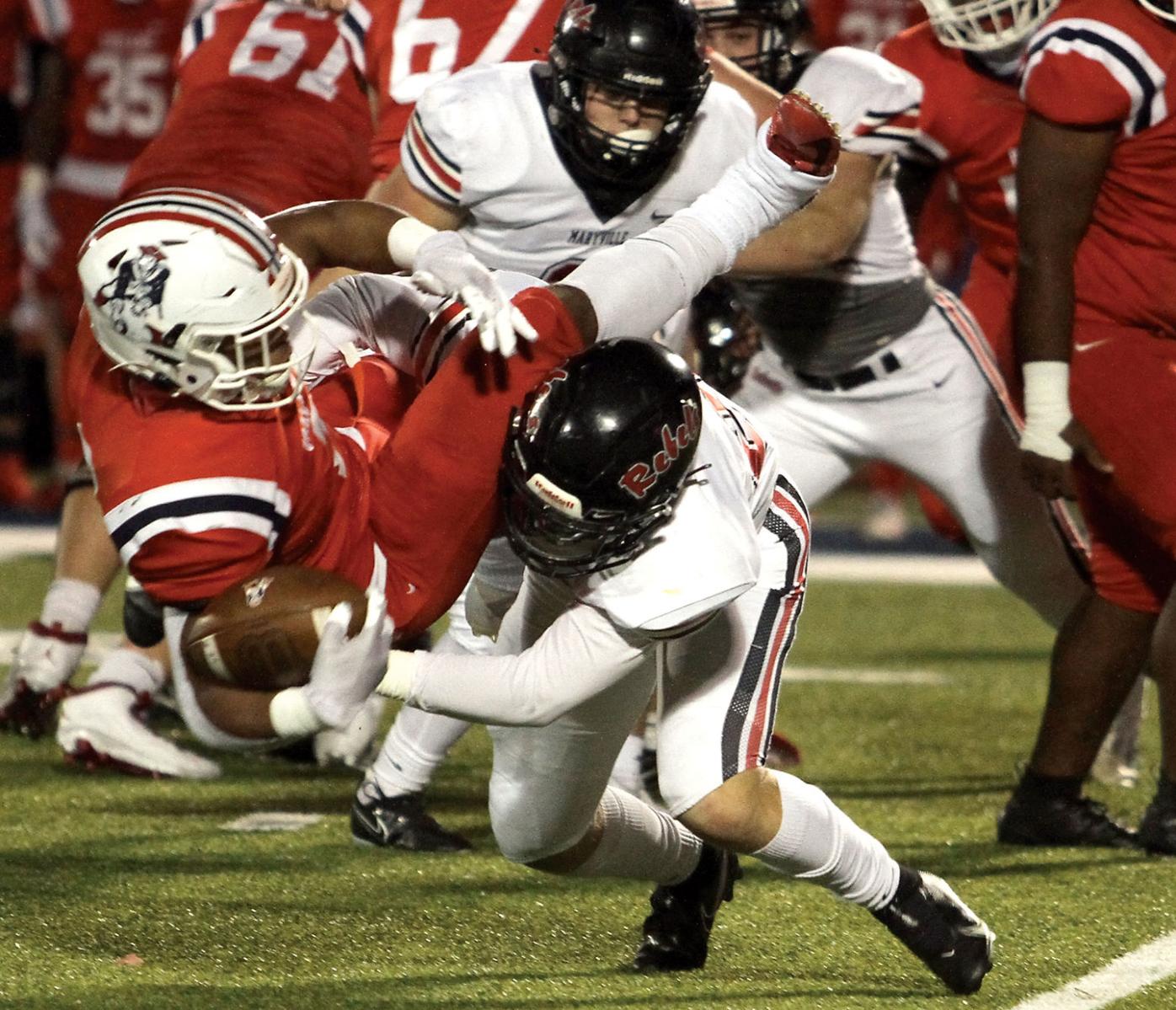 Maryville’s Erik Townsend upends Oakland’s Jordan James on Nov. 27 in the Class 6A semifinals at Ray Hughes Stadium in Murfreesboro. 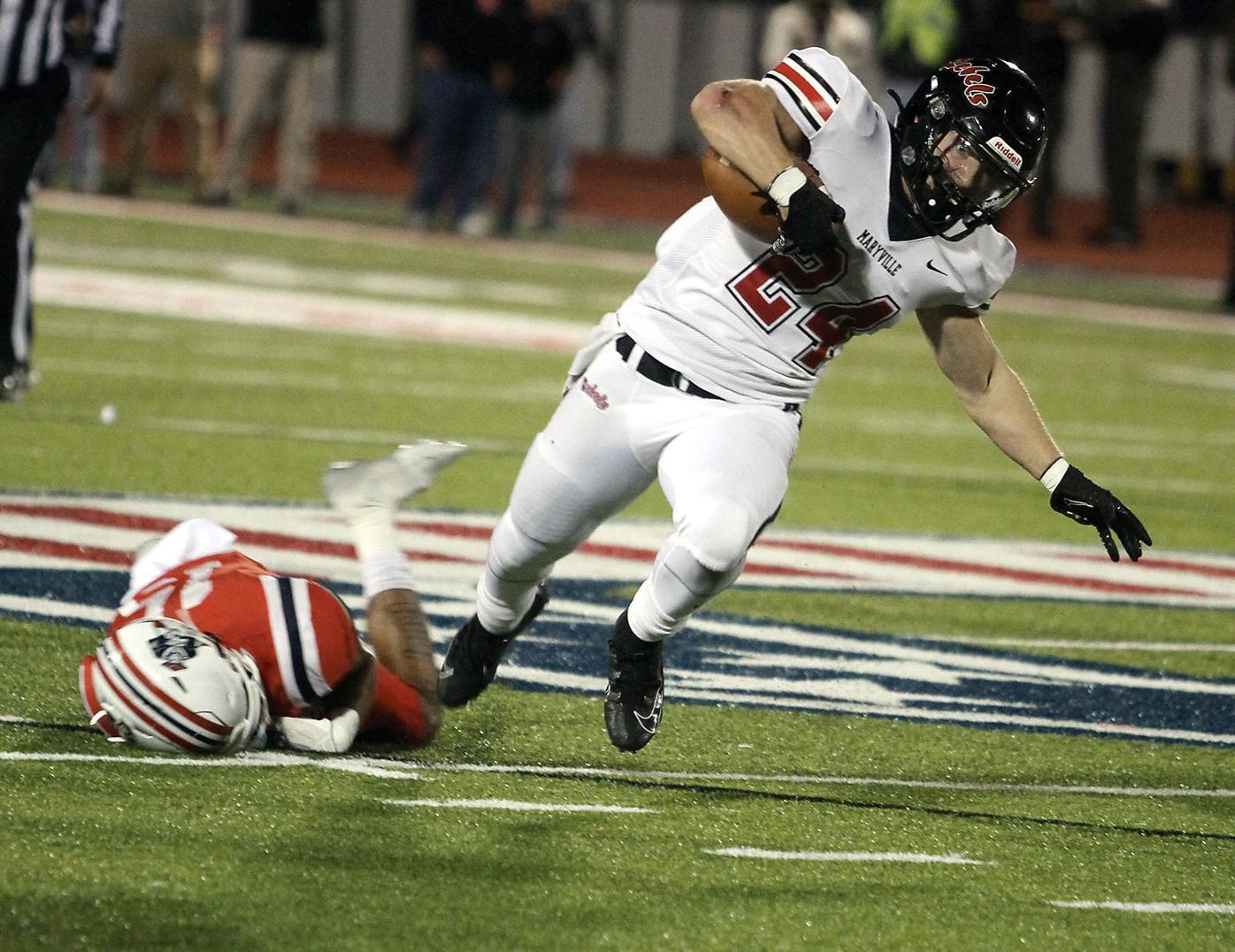 Maryville’s Parker McGill slips loose of the tackle by Oakland’s Eric Taylor on Nov. 27 in the Class 6A semifinals at Ray Hughes Stadium in Murfreesboro.

The Maryville football team watches as Oakland takes a 35-0 lead on Nov. 27 in the Class 6A semifinals at Ray Hughes Stadium in Murfreesboro.

Maryville’s Erik Townsend upends Oakland’s Jordan James on Nov. 27 in the Class 6A semifinals at Ray Hughes Stadium in Murfreesboro.

Maryville’s Parker McGill slips loose of the tackle by Oakland’s Eric Taylor on Nov. 27 in the Class 6A semifinals at Ray Hughes Stadium in Murfreesboro.

Lou Burchfield was all smiles as teammate after teammate walked over to him on the bench and expressed what it meant to play alongside him.

It was not until Burchfield embraced Maryville linebackers coach Kenny Cobble that the emotions of a career-ending 49-7 loss to Oakland in the Class 6A semifinals came pouring out.

Disappointment was not the cause of those tears — reflecting on the journey he and his fellow seniors traversed was.

“It’s been more than just this year that we’ve had to face adversity,” Burchfield told The Daily Times. “Whenever we were coming up, we were told we were the worst class to ever come through Maryville.

“It sucks that it ends this way, but it was fun while it lasted, and I’ll always be grateful for everybody that I came across.”

The doubt that Maryville’s senior class endured throughout their career reached its peak this season. The Rebels lost 17 starters from last season’s state championship team — arguably the best in program history — and some believed that if their runs of consecutive region championships (19) and semifinals appearances (20) were ever going to end, this would be the year.

Maryville (12-1) was as dominant as it had been for the past two decades, notching their eighth undefeated regular season in 10 years. The Rebels won by an average margin of 26.6 points in their 12 victories, racking up 34.5 points and 350.7 yards per game while limiting opponents to 7.9 points per game.

It just so happens the only team better than Maryville was the team standing between it and another Class 6A BlueCross Bowl appearance.

“It speaks to our kids’ resolve,” Maryville coach Derek Hunt said. “All offseason our kids expected to have a great year. It’s hard to beat someone that doesn’t quit, and they were convinced that if they gave their best every day in practice and came in and played as hard as they could, they were good enough, and they proved that they belong with all the other Maryville teams of the past.

Juniors Carson Jones and DJ Burks and sophomore Noah Vaughn played pivotal roles, but ultimately, it was the seniors who few believed in that paved the way for the Rebels’ success.

Parker McGill logged more than twice as many yards from scrimmage as the next closest offensive player, rushing for 1,471 yards and 21 touchdowns on 185 carries while adding 110 yards on 15 receptions.

Burchfield recorded a team-high 125 total tackles (21 for loss) and fellow linebackers Erik Townsend and Brock Garner finished third and fourth with 99 and 91 total tackles, respectively. Defensive backs Thomas Fry and Travis Reeder, doubted more than other players on the defensive side of the ball, limited opposing quarterbacks to 94.3 passing yards per game.

“We got every single ounce of energy and effort out of this senior class,” Hunt said. “They gave us everything that they had, and I’m just very grateful for them. I’m going to miss them because at Maryville it is tough to be told, ‘You’re going to be the class that maybe doesn’t do as well as those in the past,’ and they just didn’t buy that.”

It was fitting then that Burchfield led the final team huddle. He expressed how much fun it was to play alongside his teammates, and then reminded those who will return next season what the expectation is: another unbeaten regular season, another region championship, revenge against Oakland and the 18th state championship in program history.

“I think they’re going to make their own legacy,” Burchfield said. “It’s their job to go do it. I hope they see what we did and hopefully think about this loss next year.”