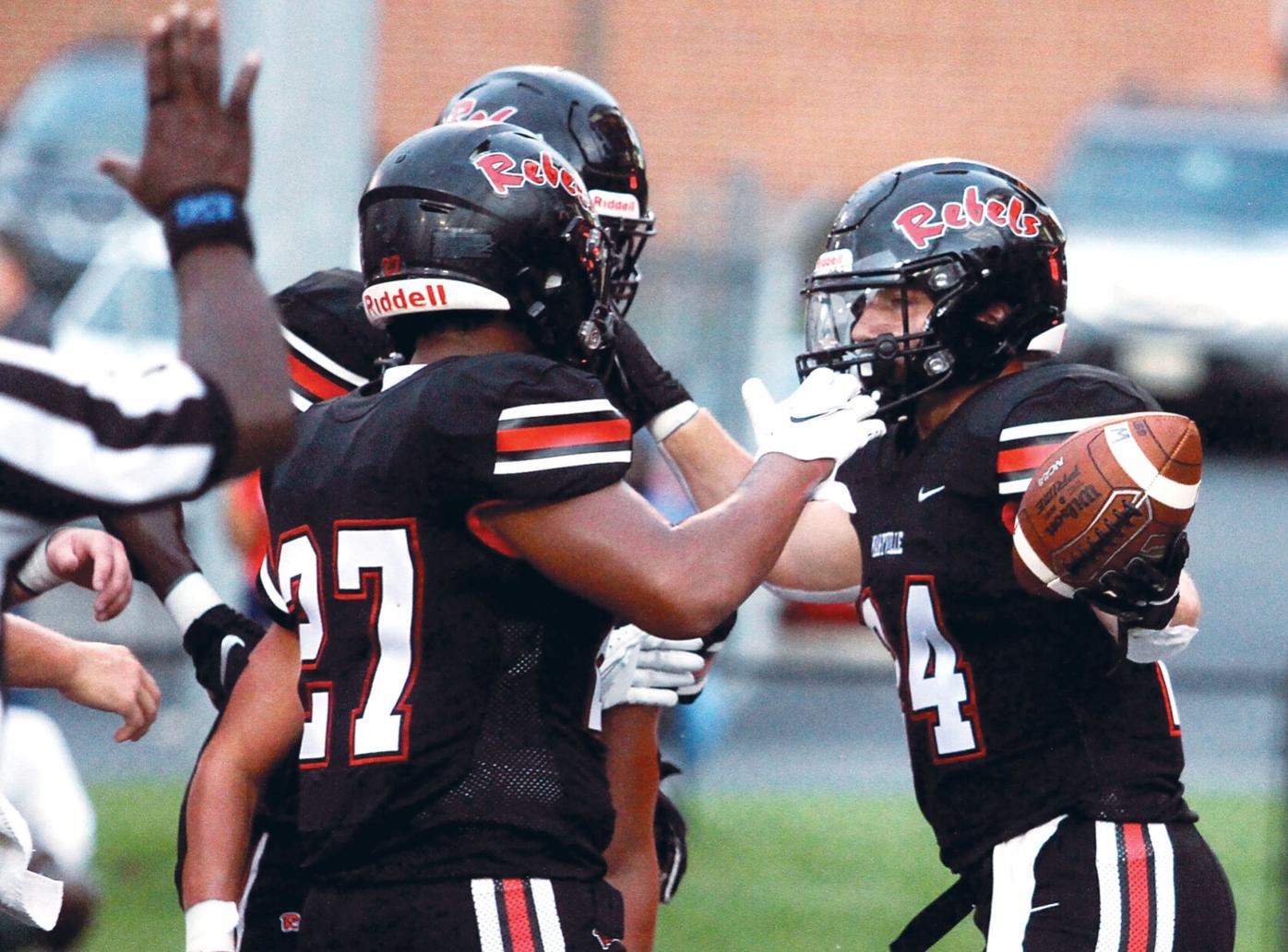 Maryville’s Parker McGill (24) celebrates with teammates after scoring a touchdown against Cleveland on Sept. 4. 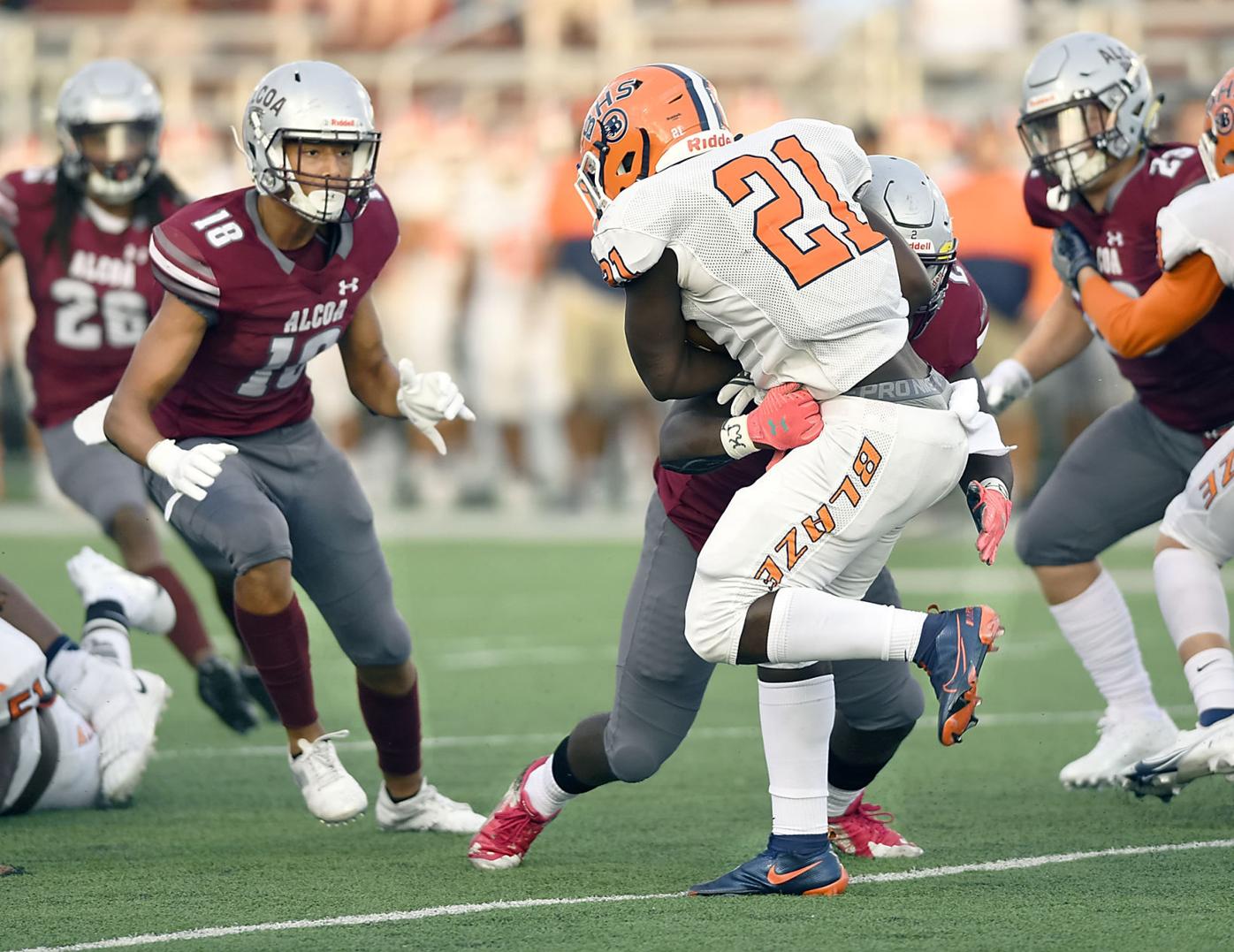 Alcoa lineman Solomon Tyson (2) gets quick penetration up the middle to bring down Blackman’s Andrew Hudson-Jackson (21) for a loss on Aug. 22 at Alcoa. 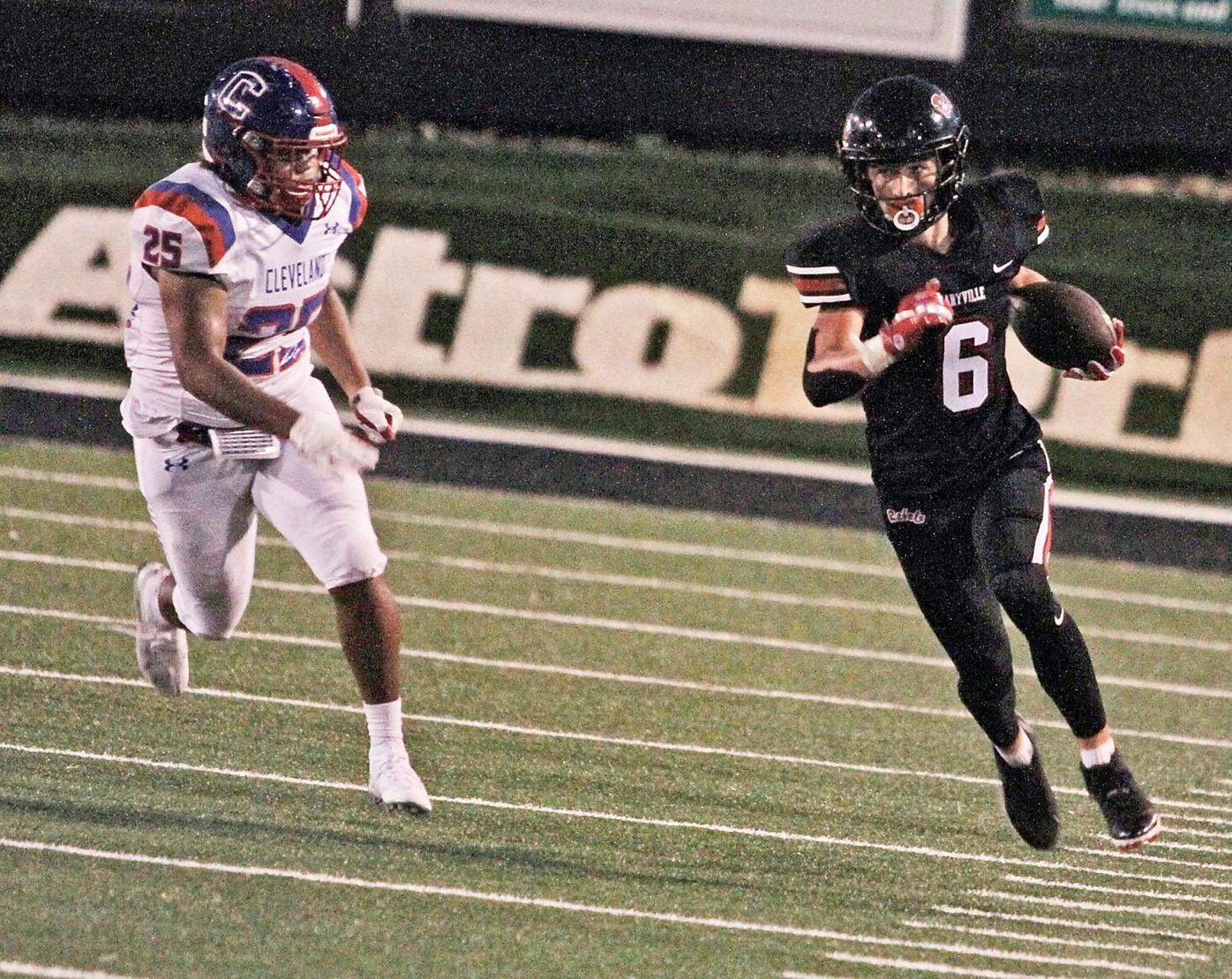 Maryville's Nick Dagel runs down the sideline chased by Cleveland's Lamar Anders on a punt return late in the first half on Sept. 4. 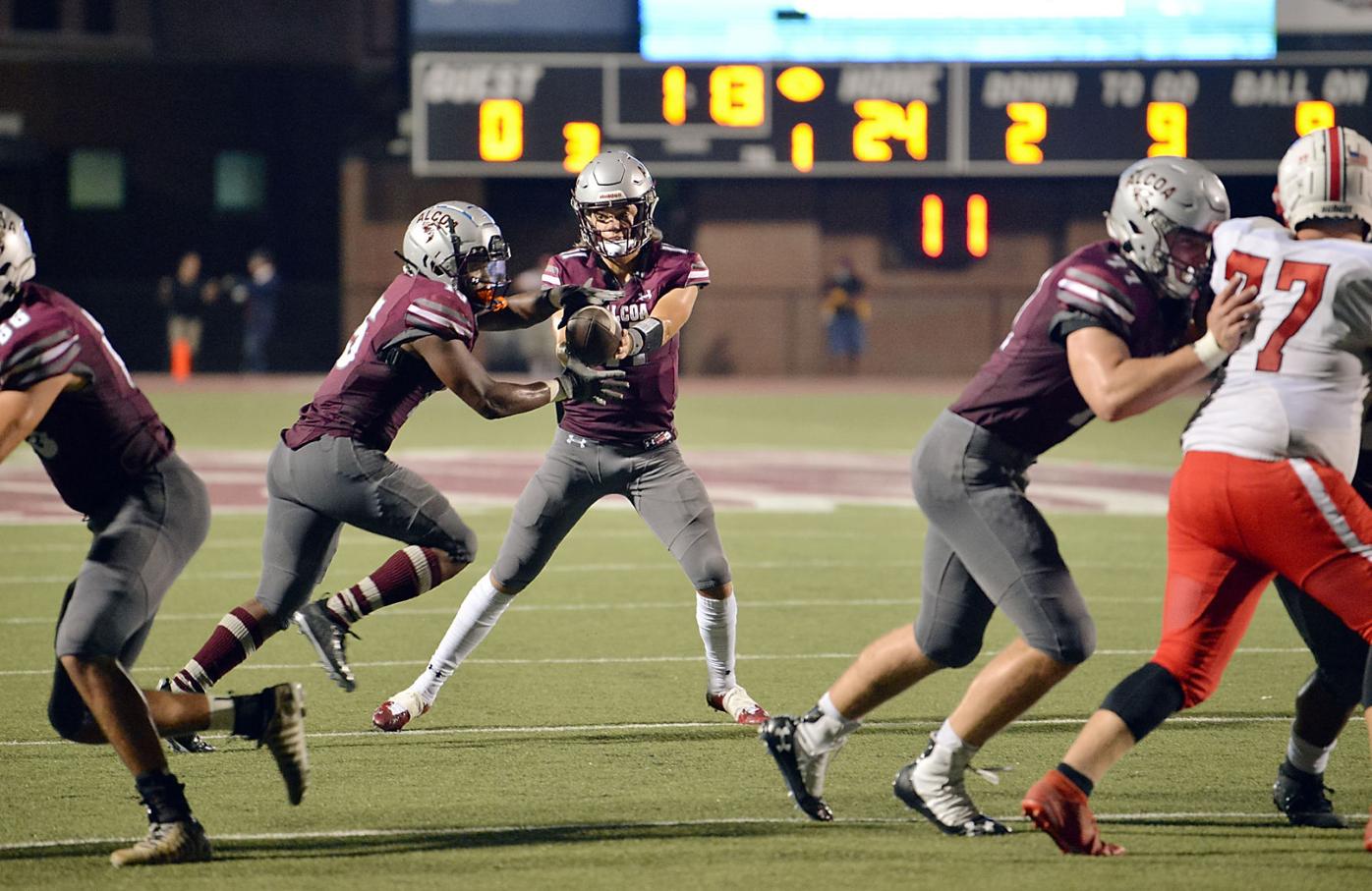 Zach Lunsford (11) hands off to Ahmaudd Sankey (15) who follows a convoy of blockers to the end zone on Sept. 4 against Scott.

Maryville’s Parker McGill (24) celebrates with teammates after scoring a touchdown against Cleveland on Sept. 4.

Alcoa lineman Solomon Tyson (2) gets quick penetration up the middle to bring down Blackman’s Andrew Hudson-Jackson (21) for a loss on Aug. 22 at Alcoa.

Maryville's Nick Dagel runs down the sideline chased by Cleveland's Lamar Anders on a punt return late in the first half on Sept. 4.

Zach Lunsford (11) hands off to Ahmaudd Sankey (15) who follows a convoy of blockers to the end zone on Sept. 4 against Scott.

It is almost as if nothing has changed.

Maryville lost 10 of its 11 offensive starters from last season’s Class 6A BlueCross Bowl championship team, and yet it has still possessed its quintessential high-powered offense through its first two games of the season.

The doubt that surrounded the Rebels following the exodus of talent at the core of the best team in program history seems to be dissipating, but Alcoa wants to keep it lingering for at least a week longer when it travels to Shields Stadium for the 92nd Battle of Pistol Creek at 7:30 p.m. Friday.

“We’re going to have 17 starters that have never played in a Maryville-Alcoa game before — that’s more than we’ve ever had,” Maryville coach Derek Hunt told The Daily Times. “They have all these guys with Division-I offers, and we don’t have many of those this year.

“That doesn’t mean that we don’t have kids that are capable. We definitely do, and I know our kids will play hard no matter what happens. I think our kids believe they can play with anybody, but when you turn Alcoa’s tape on, there’s a lot to be concerned about.”

Alcoa (3-0) boasts the best defense in the state — an impenetrable unit loaded with top-tier talent that is determined to not surrender a point this season. The Tornadoes look capable of accomplishing that feat after limiting Class 6A Blackman, Austin-East and Scott to 52 total yards combined.

Maryville (2-0) seems unfazed by the daunting task ahead of it, and it has put together a quality early-season resume to back up that confidence. The Rebels racked up 410 yards in a 49-7 victory over William Blount on Aug. 21 and 441 yards against Region 2-6A foe Cleveland in a 34-7 win on Sept. 4.

“We’re hoping to make a statement,” Maryville senior offensive lineman Trevor Abdella said. “We’re inexperienced, but we have a bunch of guys that want to play. We want to send a message across Tennessee that we’re the most physical bunch out there, so I hope we go out there and show them what we can do.”

Maryville dominated the line of scrimmage in last season’s rivalry meeting, rushing for 155 yards on 30 carries (5.2 yards per carry) in the second half en route to a 17-3 victory.

That may not be the case this time around.

The Rebels do not have the experienced group up front that they had a year ago and the Tornadoes are showcasing improved depth by rotating defensive players in more frequently.

“We’ve been trying to work in as many guys as possible for rotation purposes that way we don’t get as exhausted out there on the field,” Carroll said. “Last year, we had a lot of one-trick ponies — guys who could only play this position — but this year we’ve got it to where multiple guys can play multiple spots.”

Maryville’s easiest route to the end zone will be one facilitated by its defense. Alcoa has athleticism at the skill positions, but quarterback inconsistency from junior Safdar McCrary and sophomore Zach Lunsford have limited the unit’s potential.

“Anybody who has made a lot of mistakes for us through the first three games have been new people in our system,” Alcoa coach Gary Rankin said. “…There’s nothing you can do to make up for experience, and neither one of them have a lot of game experience. They’re going to have to be almost mistake-free for us to have a chance, I don’t think there’s any doubt about that.”

The outcome may not have any bearing on the expectation of winning a state championship that hovers over each program, but both the Rebels and Tornadoes have something to prove when a consistently potent offense faces the most dominating defense in recent memory.

“A win Friday will help boost us into being considered one of the top teams, if not the best,” Carroll said. “That’s my overall goal. I want our team to be No. 1 overall and beating Maryville will help prove it because chances are Maryville will probably go to state or make a big run.”

“The thing about playing Alcoa is it forces you to get better,” Hunt added. “Our goal is to be playing our best football come playoff time, and we will not reach our max potential if we don’t play the Alcoa’s of the world throughout the regular season.

“It’s a great opportunity. I’m excited for our young kids to see where we stack up with a very experienced, athletic, well-coached team.”

THE 92nd BATTLE OF PISTOL CREEK

TICKETS: Sold out. Tickets are no longer being sold at either office and none will be available at the gate.

ALCOA in the series

State titles after losing to Maryville: 11

MARYVILLE in the series

State titles after losing to Alcoa: 2