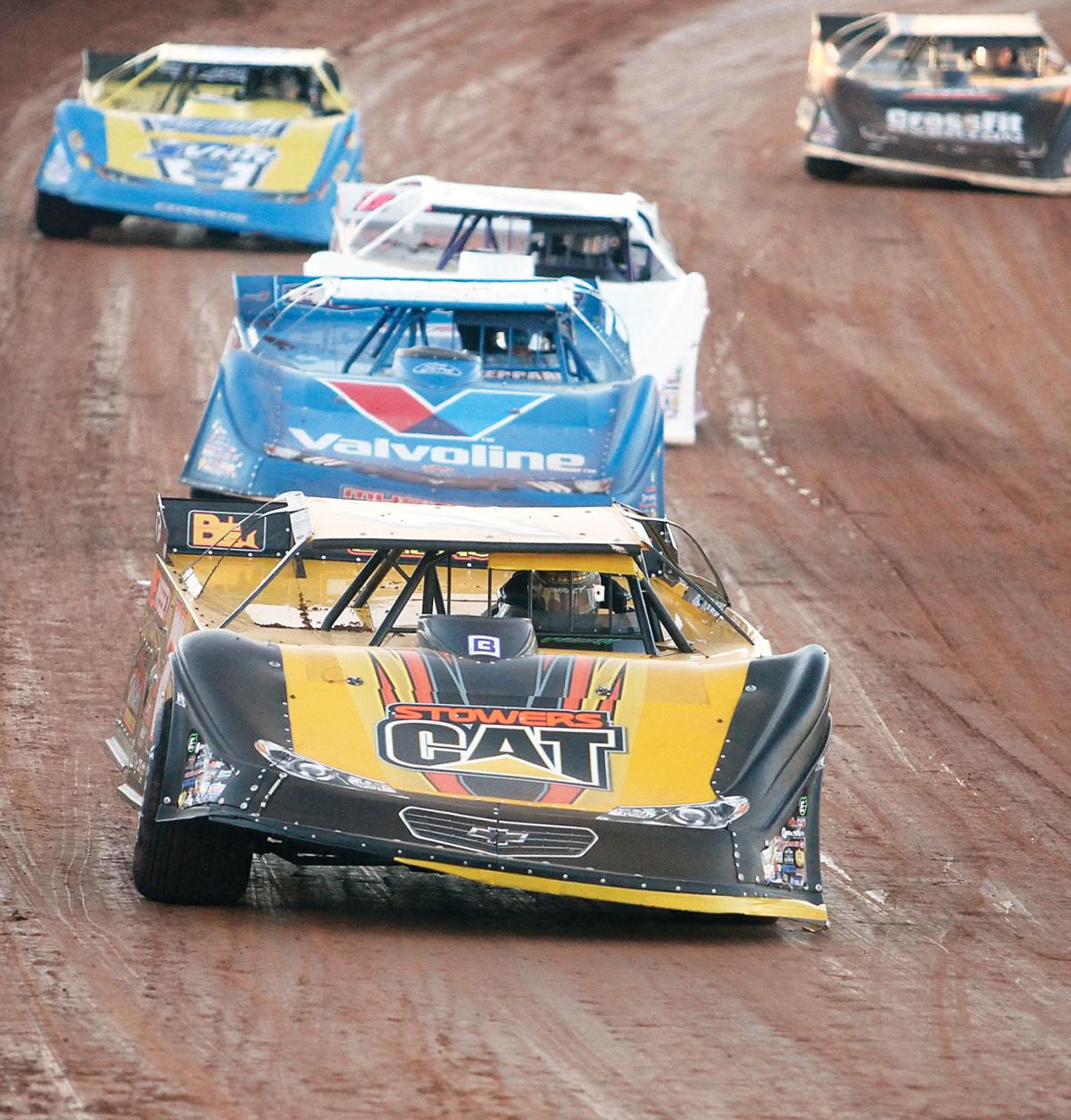 Driver David McIntosh races down the track for the Blount Motorsports team on Saturday at Smoky Mountain Speedway. 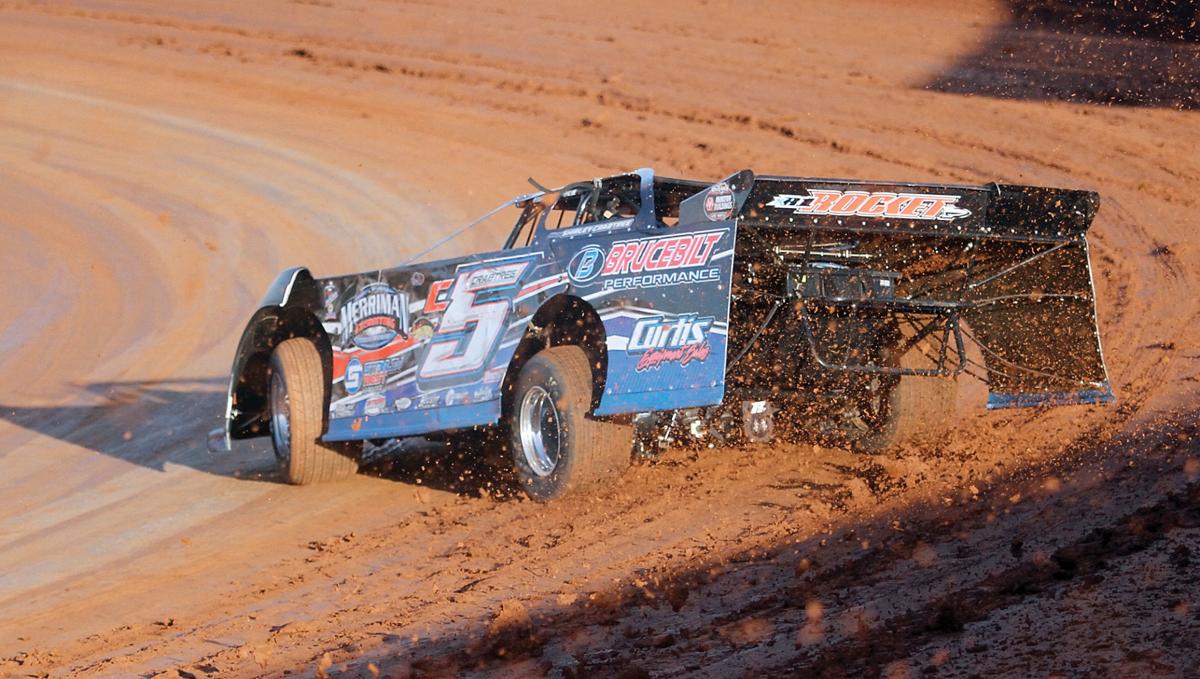 David Crabtree driving the #5 car races around Smoky Mountain Speedway on June 13 as the track has reopened for racing. 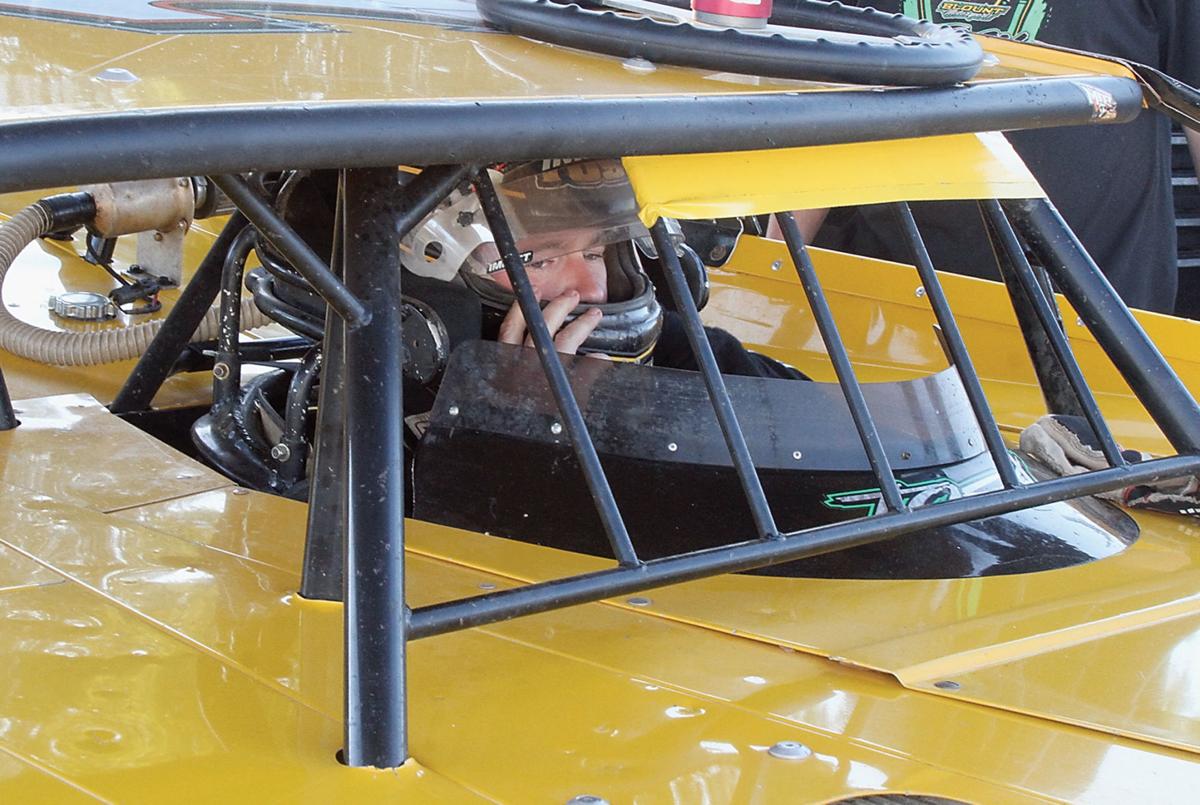 Driver David McIntosh prepares to drives onto the race track for the Blount Motorsports team at Smoky Mountain Speedway on June 13. 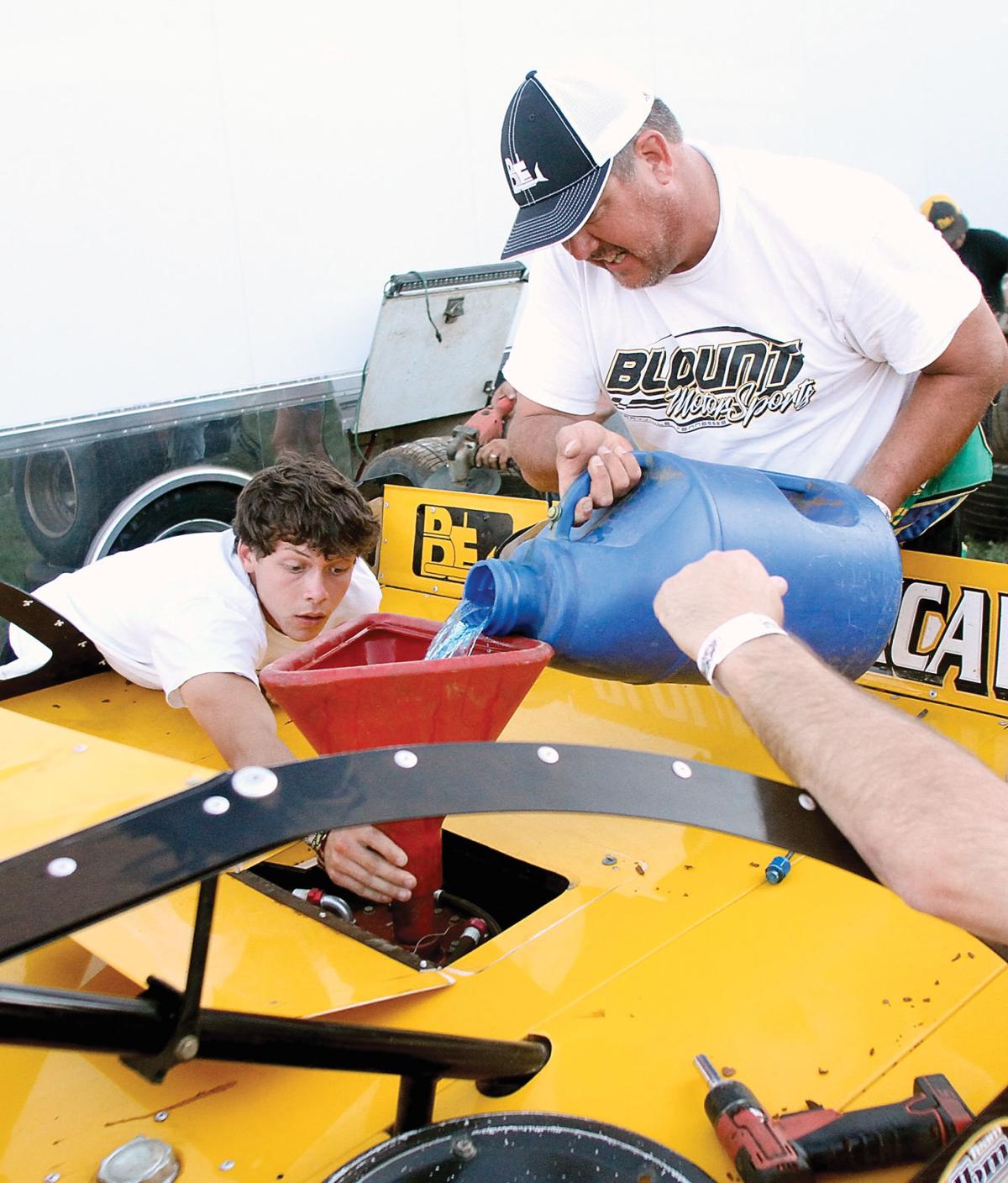 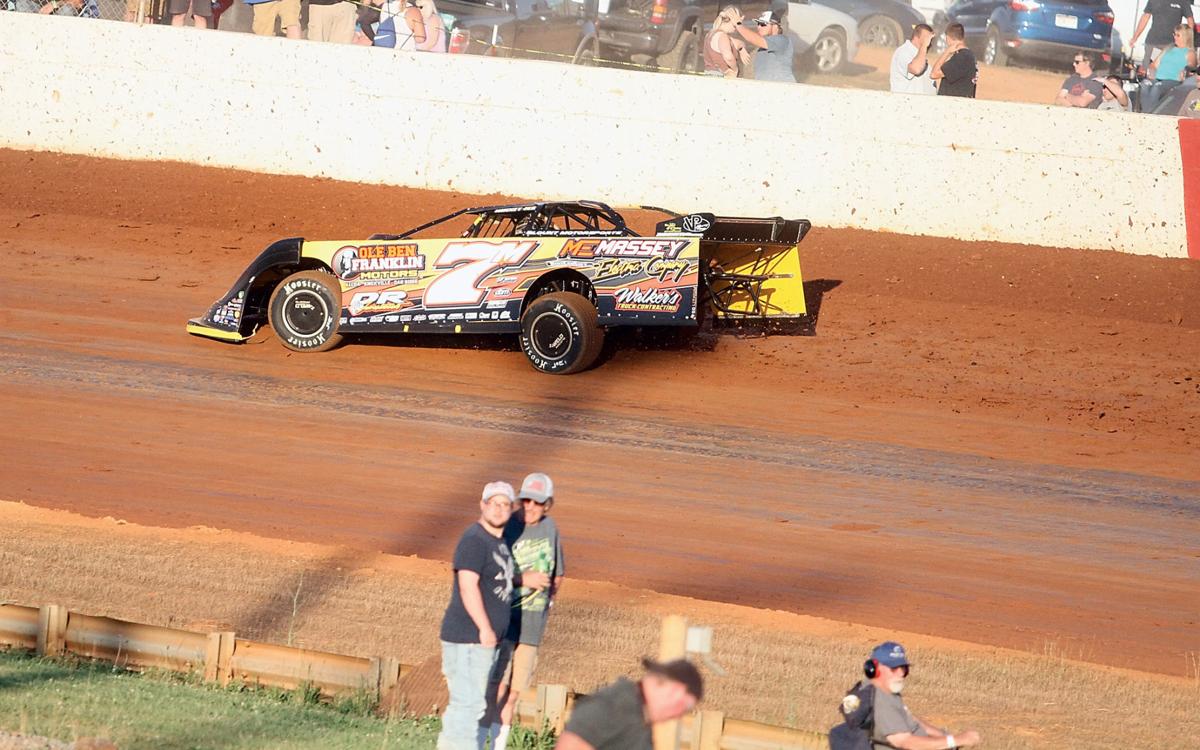 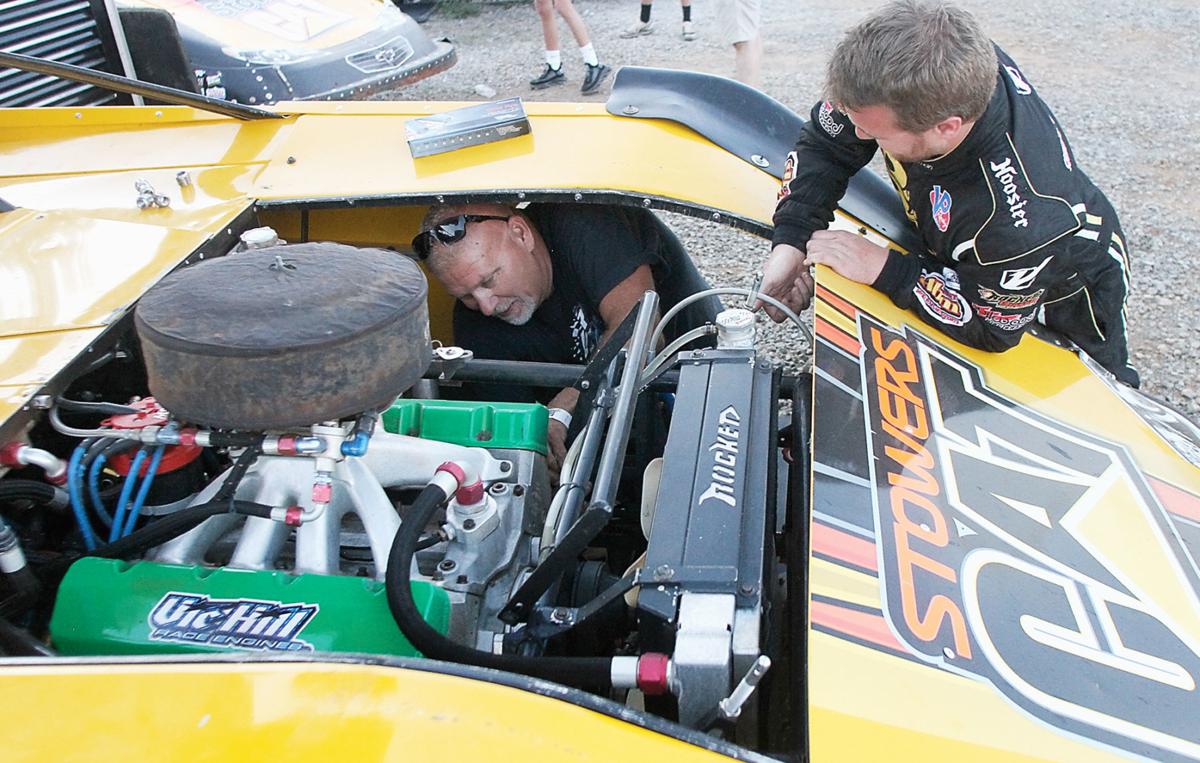 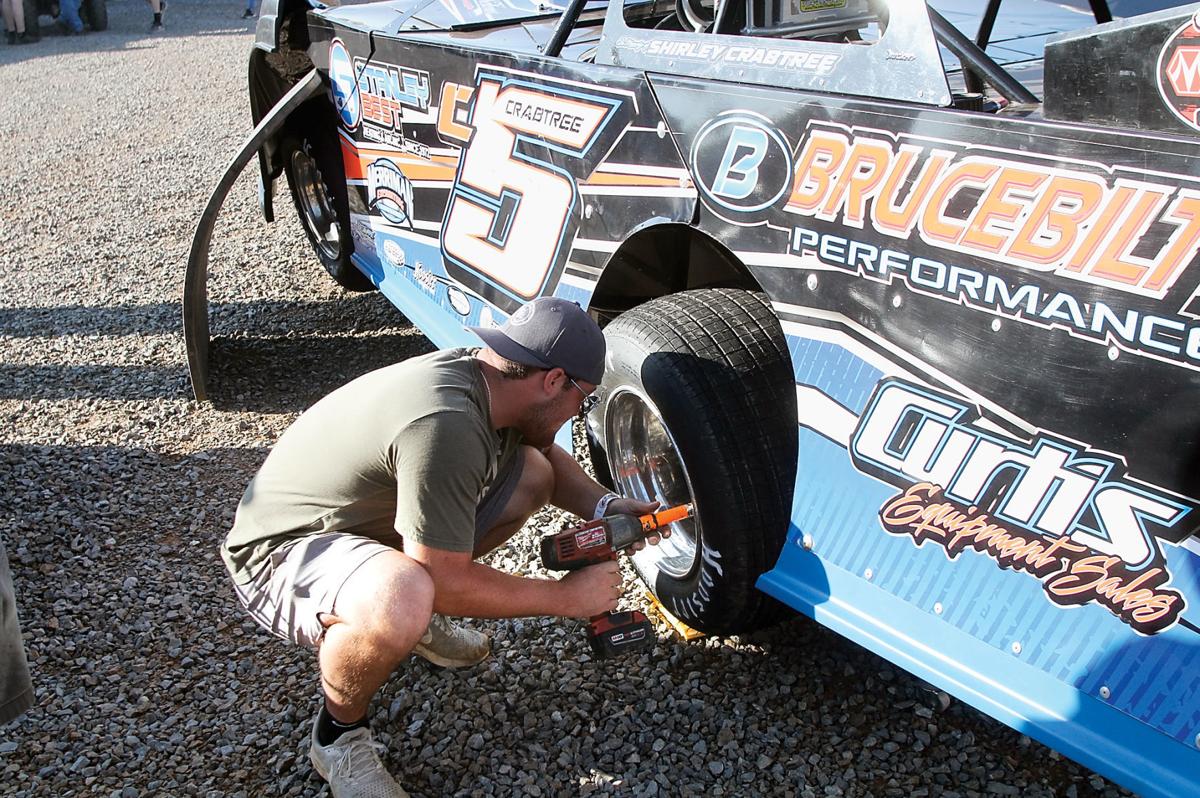 Brandon Best with the Stanley Best racing team puts new tires on one of the teams two cars June 13 as racing began at Smoky Mountain Speedway. 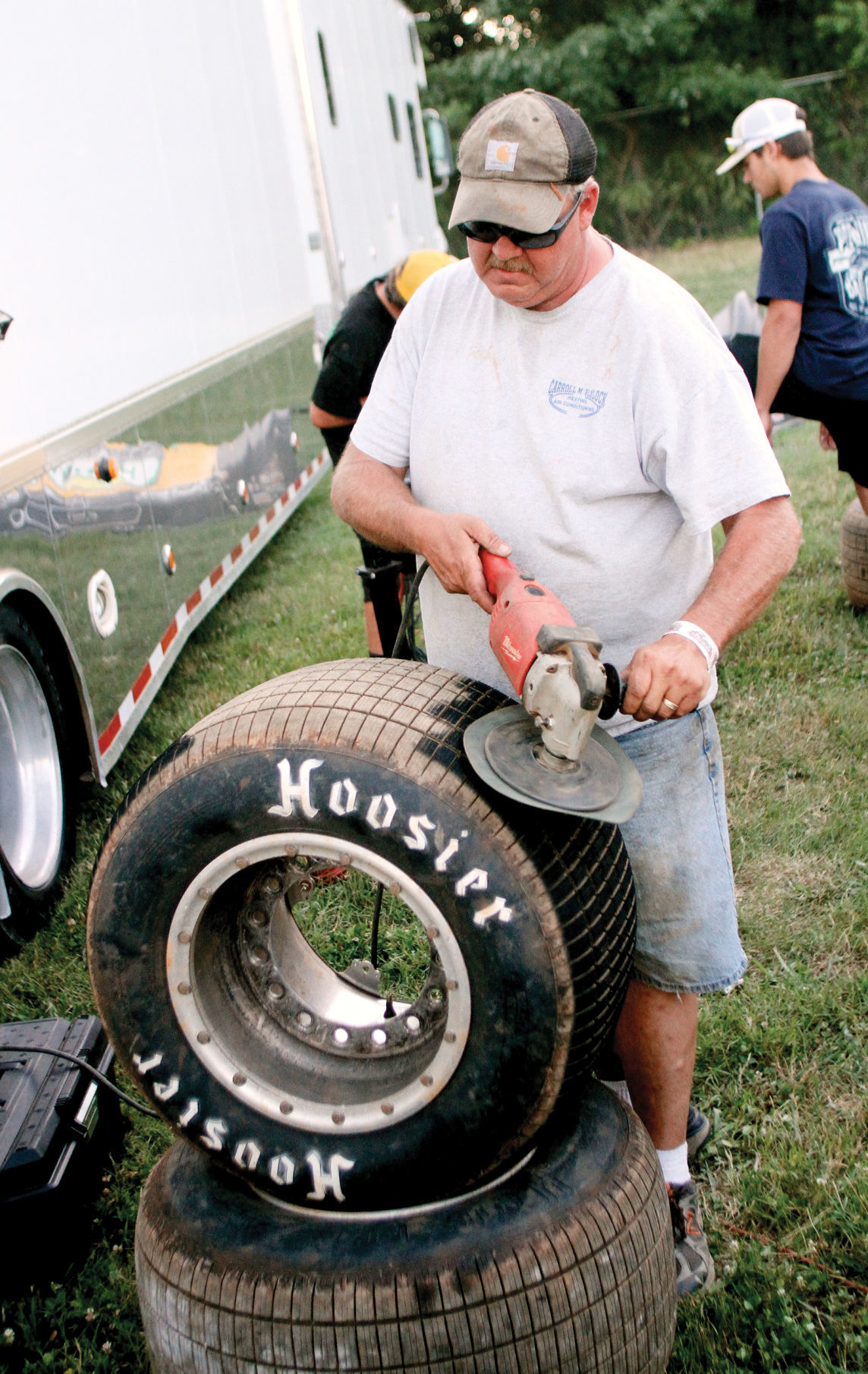 Mike McClemore grinds the surface of the race tires which opens the pores of the rubber for better traction.

Driver David McIntosh races down the track for the Blount Motorsports team on Saturday at Smoky Mountain Speedway.

David Crabtree driving the #5 car races around Smoky Mountain Speedway on June 13 as the track has reopened for racing.

Driver David McIntosh prepares to drives onto the race track for the Blount Motorsports team at Smoky Mountain Speedway on June 13.

Brandon Best with the Stanley Best racing team puts new tires on one of the teams two cars June 13 as racing began at Smoky Mountain Speedway.

Mike McClemore grinds the surface of the race tires which opens the pores of the rubber for better traction.

With lofty expenses and sometimes grueling schedules, it’s certainly not for everyone. That means those involved in the sport love it enough to offset those cons.

Larry Garner, owner of Blount Excavating and the BMS team in Maryville, is among them. He got into racing as a teen before putting it on the back burner to focus on his career and family. When he retired, he dove back into the sport and established his Dirt Super Late Model team in 2006.

Garner said the modern racing world certainly didn’t resemble the one with which he was familiar.

“It was a huge learning curve — there was none of this,” Garner said, gesturing to the cars and their intricate parts in his shop. “(Back then), you’d go into the junk yard, knock the windows out, put a roll bar in, and that was it.”

Garner owns three cars with Rocket X1R chassis, which are driven by Tommy Kerr and Donald McIntosh. Both have gotten in their fair share of accidents, but neither have ever suffered serious injuries from racing.

McIntosh, a 27-year-old who lives in Dawsonville, Georgia, is the team’s primary racer, competing in some 60 competitions from Florida to northern Ohio and anywhere in between.

McIntosh got to know Garner and Bryant through racing and joined the BMS team in 2015.

“The rush — there’s just nothing like it,” McIntosh said. “You don’t get that feeling anywhere other than driving a race car.”

Kerr, a 45-year-old Maryville native, has been racing for almost three decades. He used to invest an extensive amount of time into the sport like McIntosh. Some of his major accomplishments include winning Rookie of the Year honors in the Advance Auto Parts Thunder Series and the 2009 Southern Nationals Championship.

But with two kids and a full-time job at Blount Excavating, it all eventually became too much for Kerr. He now sticks to competing in local races, such as ones at the Smoky Mountain Speedway in Maryville.

“It’s hard to balance the racing life with the family life,” Kerr said. “When you get to a certain age, you’re ready to slow down a little bit. I’m fortunate enough I’m not having to do it for a living. I’m doing it for fun.”

In a typical year, the BMS team competes about every weekend from February to November. With three to four men living together in a motorhome for days at a time, there are ups and downs.

Kerr said the team has plenty of road stories before adding in jest, “Probably not anything you’d want to mention in the paper.”

“Road life can be exciting,” he said. “It’s sort of like a marriage — whatever you put into it, you get out of it.”

McIntosh said it’s much easier to get along in close quarters when BMS is winning races, and it has done plenty of that. In Garner’s shop, shelves featuring trophies and oversized checks cover the walls. Purses in the series BMS runs typically range from $4,000 to $10,000. The team has won at least one championship each year since its inception.

Garner said he and Bryant like the checks more than the trophies, although they don’t come close to offsetting the cost of maintaining the vehicles. Sponsors are essential, as Bryant said it typically costs between $2,000 and $3,000 to get a car race-ready each week.

Stanley Best, owner of Stanley Best Heating & Air in Maryville, owns one of the only other racing teams in Blount County, although his doesn’t travel nearly as far or often as Garner’s.

“NASCAR has really pushed us to a different level,” Best said. “The price of it has increased tremendously. It’s just one of those things that’s in your blood. If you love to do it, you love to do it. I’m struck with the curse.”

Despite mounting costs that have made racing increasingly unattainable, Garner and Best’s love for the sport has kept it alive and well in Blount County. In 2010, the pair teamed up with another local businessman, Roger Sellers, and purchased the Smoky Mountain Speedway.

The track, which opened in 1962 and has hosted 12 NASCAR events, was not in operation because of financial issues when the trio got to work reviving it. It reopened that same year and, in 2018, Sellers purchased Garner and Best’s shares to become the sole owner.

Sellers called the track “a dying breed” when he helped purchase it a decade ago. That certainly is no longer the case in Blount County, as was evidenced by the more than 4,000 spectators who packed into the stands at Smoky Mountain Speedway on Saturday night for the Lucas Oil Late Model Dirt Series’ Mountain Moonshine Classic.

McIntosh placed 14th while Kerr took 22nd of 26 in the 60-lap race. The BMS team will return to action this weekend at the World of Outlaws Late Model Series doubleheader at Volunteer Speedway in Greene County.

“I have a passion for racing and they do, too,” Sellers said of Garner and Best. “We were definitely able to salvage the track. … It brings a lot to the area, and I think (the community) really enjoys having us around.”