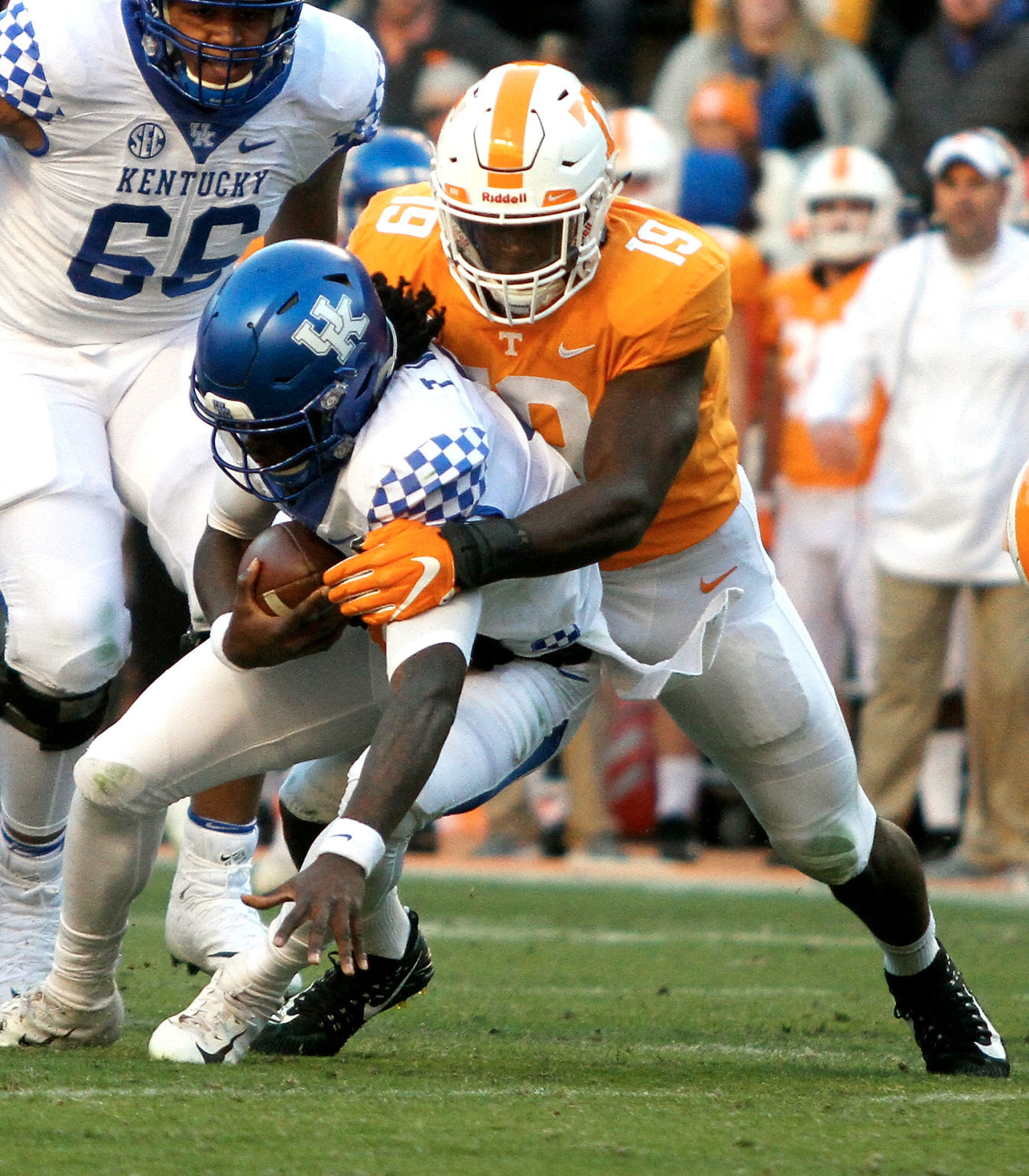 Tennessee linebacker Darrell Taylor sacks Kentucky quarterback Terry Wilson for one of his four sacks against the Wildcats on Nov. 10 at Neyland Stadium in Knoxville. Taylor’s four sacks are the most in one game by any player in FBS so far this season. 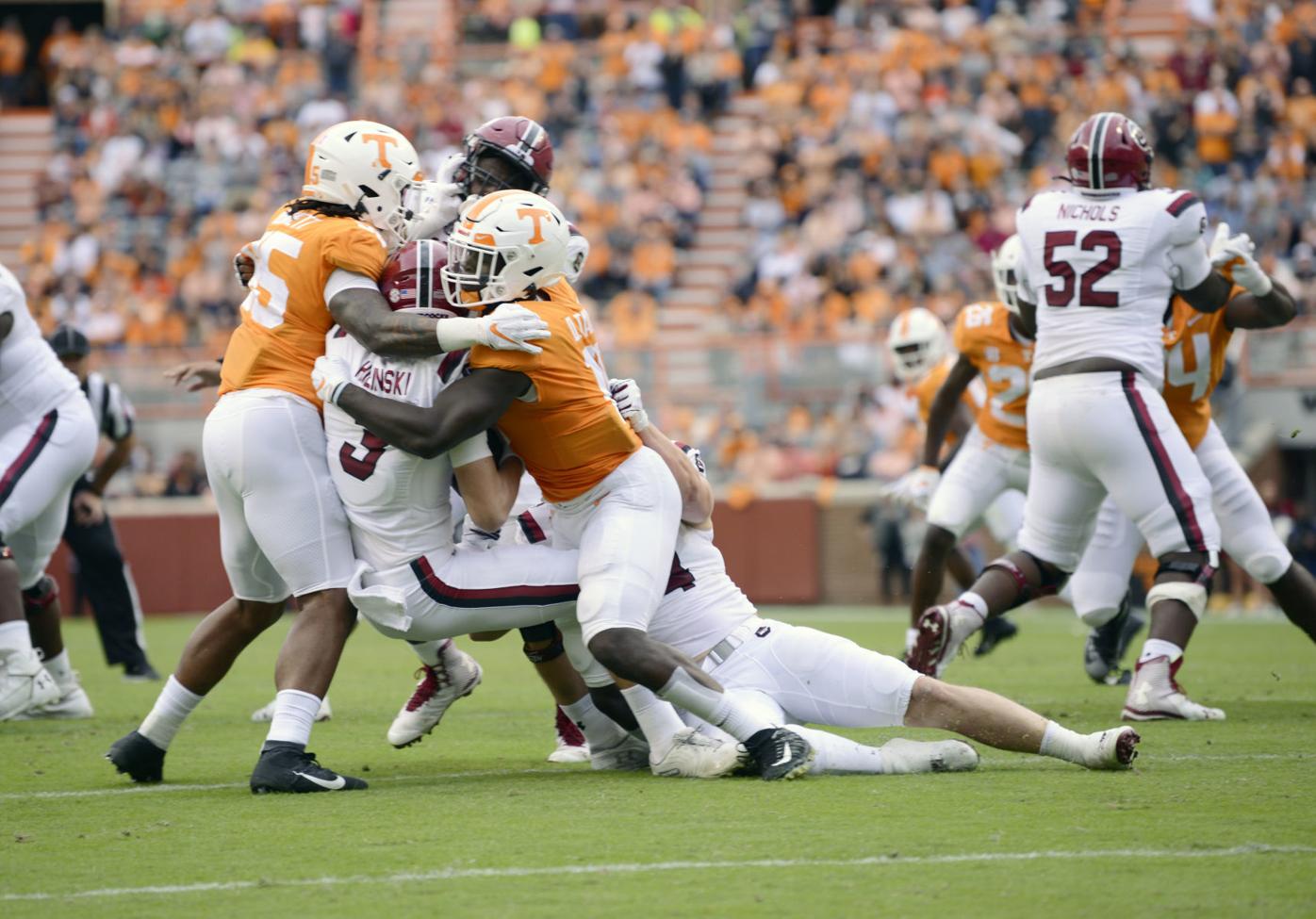 Tennessee linebacker Darrell Taylor sacks Kentucky quarterback Terry Wilson for one of his four sacks against the Wildcats on Nov. 10 at Neyland Stadium in Knoxville. Taylor’s four sacks are the most in one game by any player in FBS so far this season.

On Saturdays throughout the last four autumns, Tennessee football fans watched Darrell Taylor cause havoc for opposing offenses with his powerful pass rush moves and his bone-crushing hits in the backfield.

On Friday night they saw a different side of Taylor as he celebrated a life-changing moment with those closest to him.

A 32-second video posted to the Vols football Twitter account showed the moment when Taylor found out he was being selected in the second round of the NFL Draft. The Seattle Seahawks had just traded two picks to the New York Jets to acquire the No. 48 overall pick and took Taylor.

Then Taylor answered a phone call and heard a voice familiar to anyone who follows the NFL — Seahawks head coach Pete Carroll.

“Thank you, thank you,” Taylor responded.

“Man, that’s so cool,” Carroll said. “We were waiting for you the whole way through. We’ve been sweating it out. Made a little trade to get you. Did you notice that?”

“Yeah, I saw it,” Taylor said, still fazed by the surreal moment.

“We came to get ya,” Carroll said before turning his attention to those in the room with him. “Hey boys we got him. Here he is right there.”

The video continues with Seahawks’ personnel cheering in the background and concludes with Taylor’s family mobbing him in celebration. At least seven people besides Taylor can be seen in the video.

Finally, all of Taylor’s hard work had paid off in the form of becoming a top-50 NFL Draft selection.

“It’s exciting because they traded up to get me, so that means they must have really wanted me,” Taylor said later in a media session. “I couldn’t thank them enough for it. I’m just ready to get to work. I’m excited they picked me to be their pass rusher and to be part of their organization. I’m just ready to show them what I got.”

Perhaps the most fitting part of the video is how many people were there to celebrate with Taylor in his hometown of Hopewell, Virginia. Family is important to almost everybody, but the story of Taylor’s family is not straightforward.

Taylor’s father was incarcerated when Taylor was young so Taylor rarely saw him. Taylor’s mother, Peggy, died from breast cancer on May 2, 2013. His mother’s death hit him so hard he didn’t play football that year.

Luckily for Taylor, he had other family and a strong outside support system. He said he lived with his aunt for a while and that she always was there for him. Taylor said his sister was important for him during that time also.

Even when he sat his sophomore football season, the Hopewell coaches cared for him.

“My whole city was pretty much there for me every step of the way going through this process, going through that time when my mom had passed,” said Taylor, who had 16.5 sacks in 25 games over his last two seasons with the Vols. “They were all there for me and were my backbone, to make sure I kept a straight mind, make sure I was doing everything I needed to do to graduate from high school, make it to college and do what I’m doing now.”

After being drafted by the Seahawks, what Taylor is doing now is a big deal but not as big a deal as the other aspect of his family.

Taylor is the father of a 1-year old boy.

Ka’Marii was born in summer 2018 and will be 2 years old by the time Taylor plays in his first NFL game. With so much adversity during his own childhood, Taylor learned to grow up fast.

Having a child of his own made him grow up even faster.

It meant a lot to Taylor to be able to spend so much time with his family during the ongoing COVID-19 pandemic. He often stayed in Knoxville rather than going back to Hopewell in order to focus on his class work.

After graduating in December, he got a chance to spend more time in Hopewell — most notably with his sister and his nephew.

He also said whenever he goes home he drives to Richmond to see the water and historic sites so perhaps it was a match made in heaven when the Seahawks called his name on Friday night.

Before the pandemic shut down almost all travel and forced the practice of social distancing, Taylor visited Seattle and liked what he saw and the people he met.

When he had a few minutes to himself, he enjoyed doing the same thing in a town more than 2,800 miles from where he grew up.

“I’m an outdoors person,” Taylor said. “So when I got the chance to drive around the city just a little bit, for like five minutes, I got the chance to look up and see all the trees and everything, how pretty and green it was out there. That was probably the most eye-catching thing to me.”

On Saturday, Tennessee had a second player picked when wide receiver Jauan Jennings went to the NFC champion San Francisco 49ers with the third pick in the seventh and final round (No. 217 overall).

Jennings had his best season in 2019 when he led the Vols with 59 receptions, 969 receiving yards and eight touchdowns.

Perhaps the most noteworthy aspect of Jennings’ Tennessee swan songs was the ferocity with which he carried the ball after he caught it. He led all NCAA receivers with 30 broken tackles.

Jennings projects as a slot receiver in the NFL.