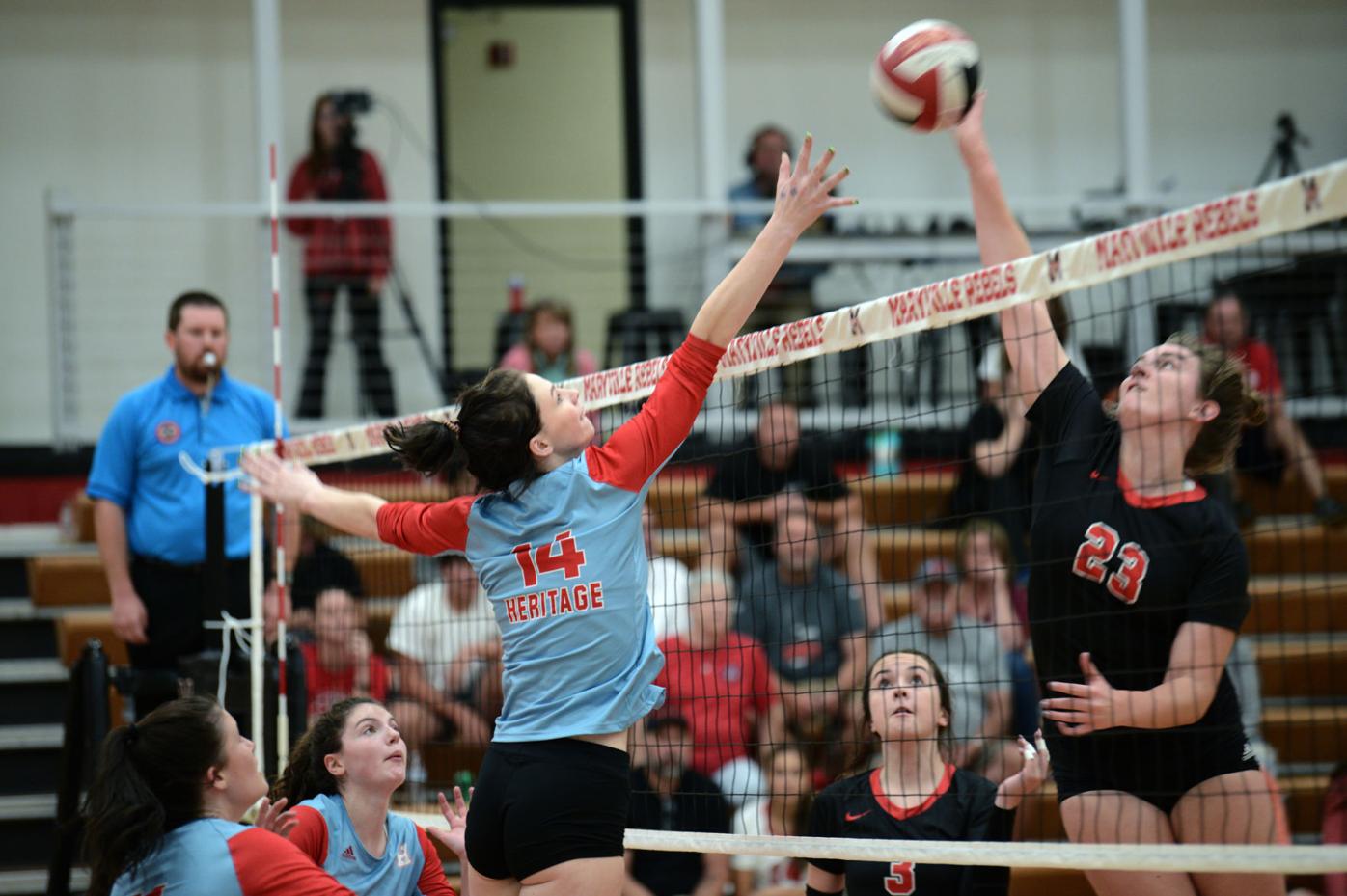 Heritage’s Haley Harnichar (14) and Maryville’s Grace Akard (23) battle at the net with several teammates getting ready to react. 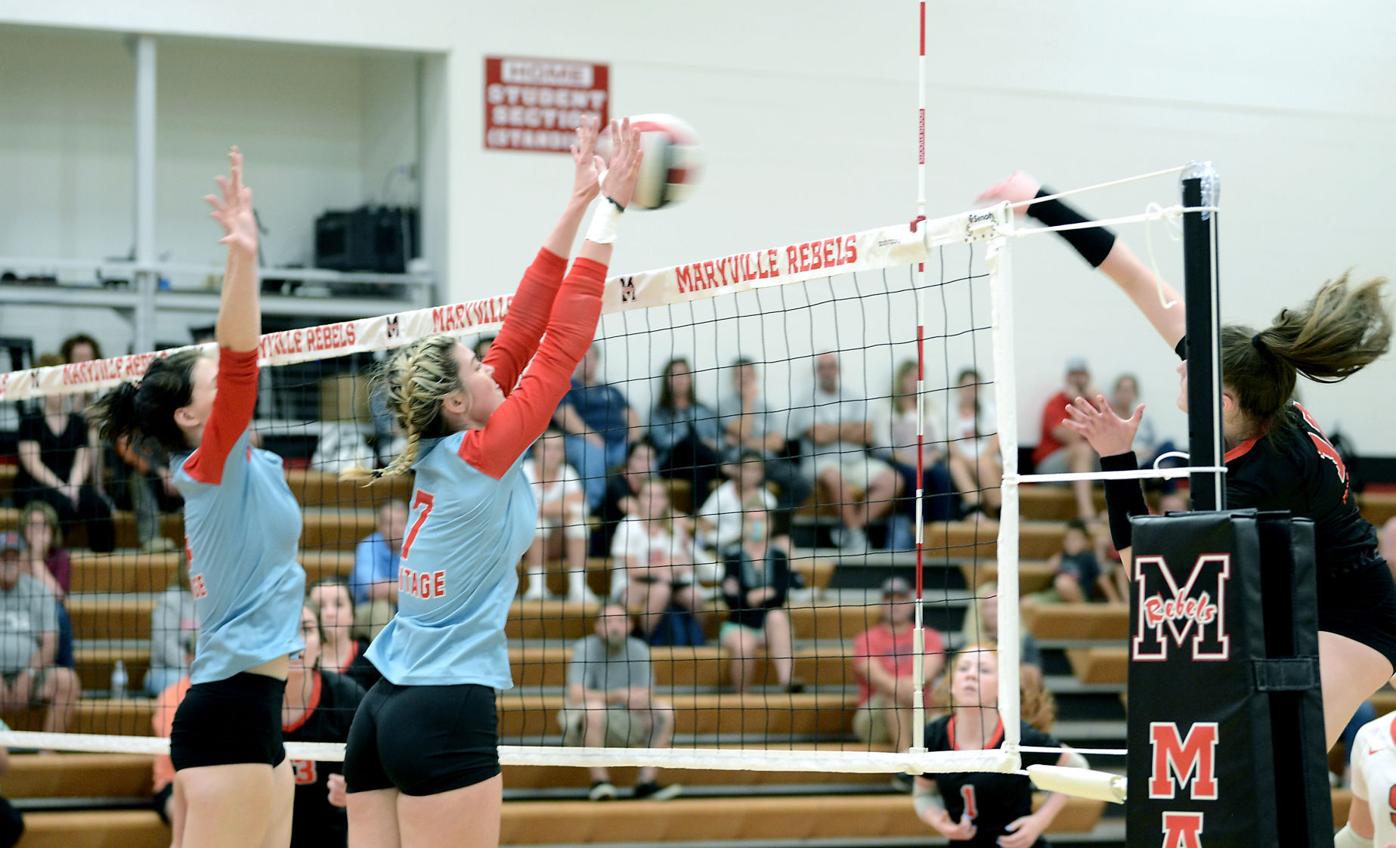 Heritage’s Aubrey Pierce (7) with a block off of a shot by Maryville’s Amanda Mack during a District 4-AAA match up on Tuesday in Maryville. 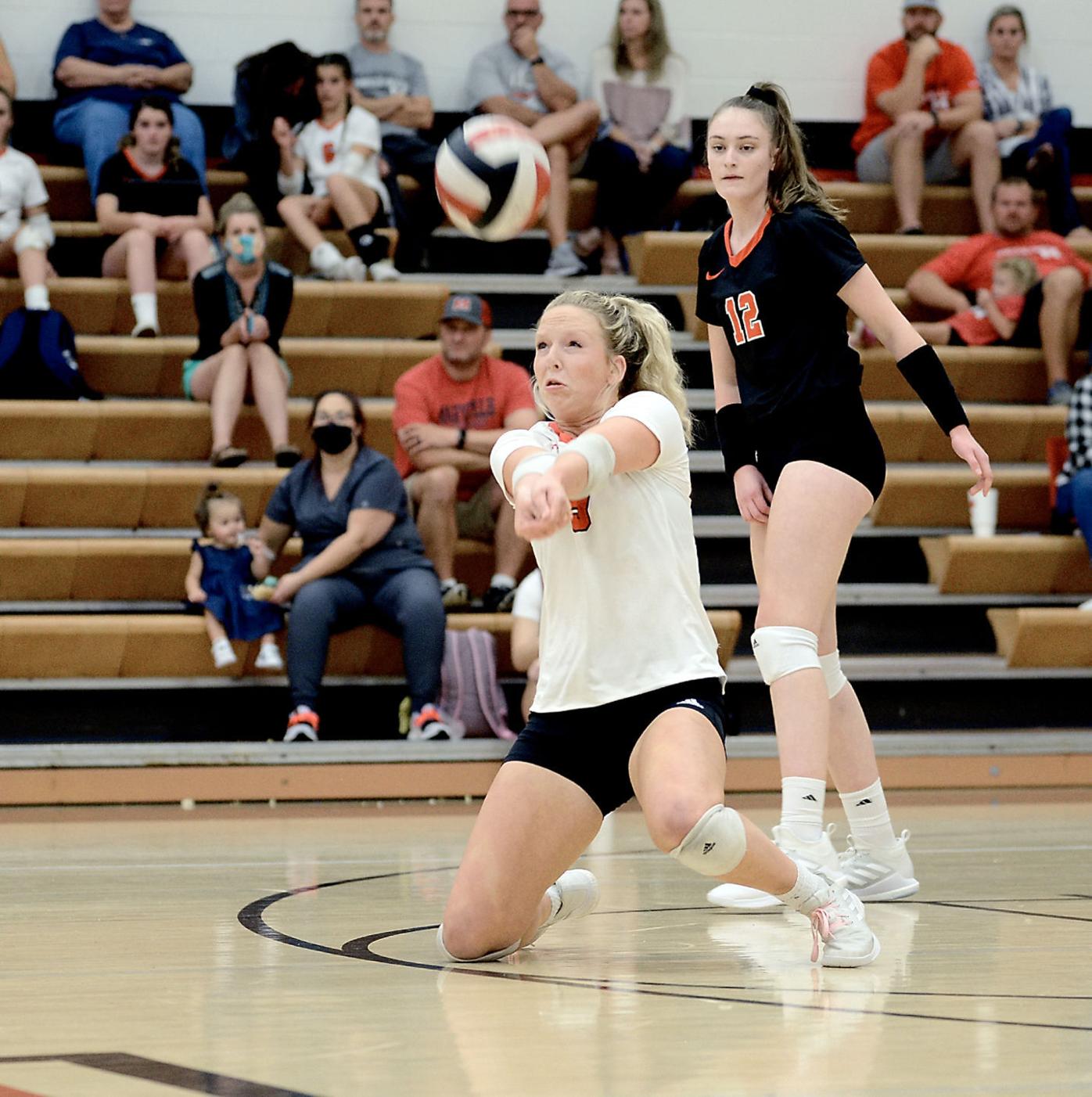 Maryville’s Delany White (9) goes to the floor to bump a shot against Heritage at a match played at Maryville Tuesday night. 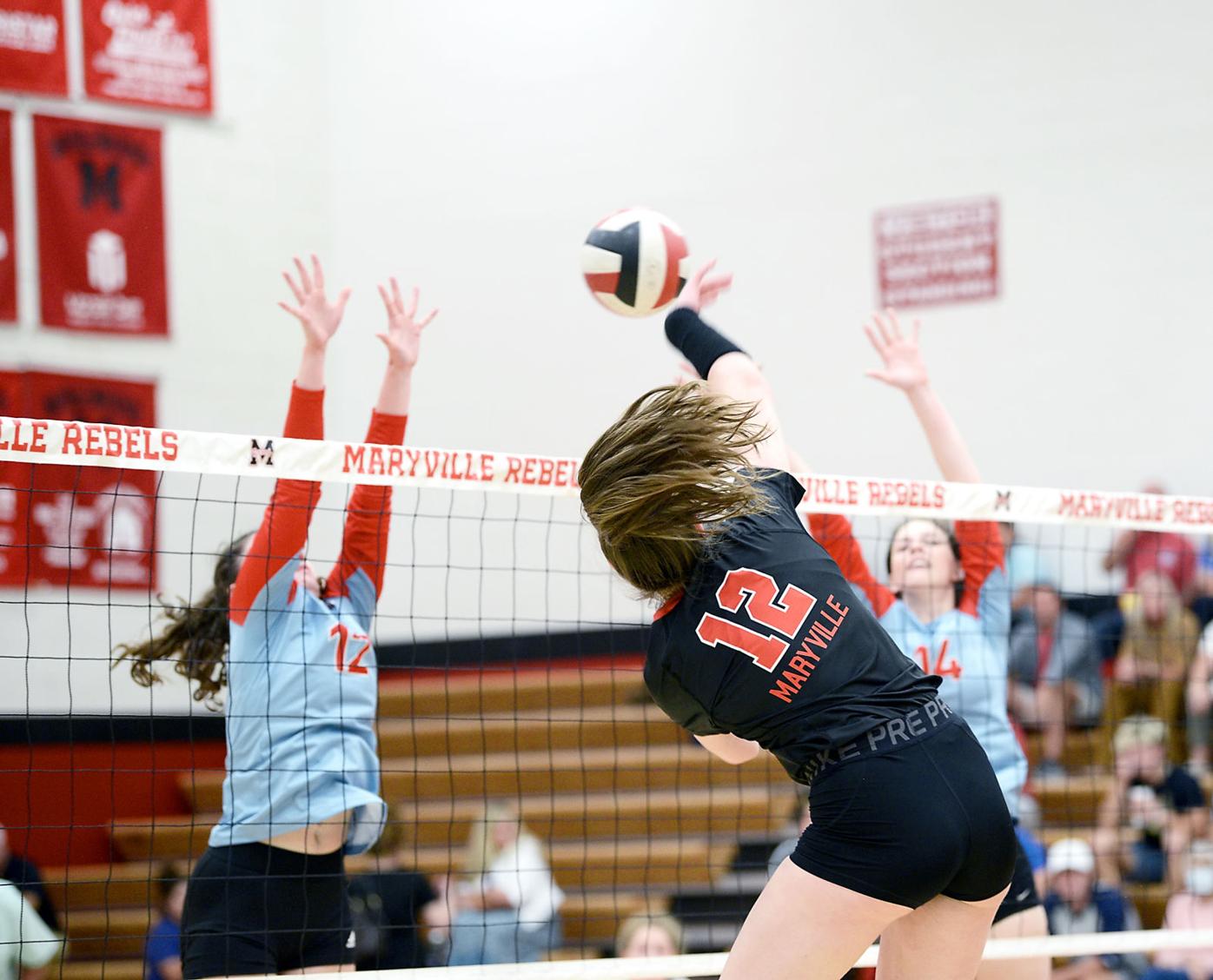 Heritage’s Haley Harnichar (14) and Maryville’s Grace Akard (23) battle at the net with several teammates getting ready to react.

Heritage’s Aubrey Pierce (7) with a block off of a shot by Maryville’s Amanda Mack during a District 4-AAA match up on Tuesday in Maryville.

Maryville’s Delany White (9) goes to the floor to bump a shot against Heritage at a match played at Maryville Tuesday night.

Heritage coach Jason Keeble felt like the Lady Mountaineers let a first-set victory slip through their fingers, but Maryville coach Chris Hames never doubted the Lady Rebels would crawl out of the early hole.

Maryville returned every key player from last season’s Class AAA state tournament team, and that experience and chemistry is on display in every match it plays.

It proved to be the difference in a pivotal first set that paved the way for the Lady Rebels to knock off the Lady Mountaineers, 27-25, 25-15, 25-20, on Tuesday at Maryville High School.

“I think it boils down to game experience,” Keeble told The Daily Times. “They have kids that have played at a high level since they were tiny all the way through the club level, and we have kids that work hard, but if you look at the experience in terms of years played, they have us in that department.

“I told the girls to walk out of here with their heads held high because we competed.”

The Lady Rebels drew even at 19, erasing a 18-12 deficit, and then engaged in a back-and-forth with the Lady Mountaineers that almost ended in defeat two different times. A hitting error by Heritage senior outside hitter Sophie Day trimmed the Lady Mountaineers’ lead to 24-23 and then Maryville senior middle hitter Grace Akard came through with a kill to force a tiebreaker.

A Maryville point was followed by a Day kill to knot it up at 25, but Maryville sophomore outside hitter Amanda Mack answered with a kill of her own. Another hitting error on Day completed the Lady Rebels’ comeback.

“This team has had the mentality that no matter what, we’re winning,” Maryville junior setter Liv Gravatt said. “Last year, we had some of those situations where we would be down and give up and then have to let it go, but now when we’re down like that we come together as a team and everybody is talking to each other and hyping each other up. We’re not letting anyone get down on themselves.

Maryville was in full control from that point on.

The Lady Mountaineers entered the second set in a malaise after falling short in the first, and the Lady Rebels cruised to a victory, grabbing a 10-3 lead and never trailing by less than seven points the rest of the way. Heritage rebounded in the third set, but it was not enough to slow Maryville.

“(Heritage) played at a pretty high level (in the first set), and I knew that it would be really hard to sustain that because we have stronger hitters than them,” Hames said. “For them, to just do everything they can to win and not win that set, that was very deflating.”

The straight-sets victory comes days after Maryville returned from participating in the Louisville Invitational Volleyball Tournament, where the Lady Rebels went 1-3 but won a set against Assumption (Ky.) — one of the best programs in the country.

Maryville hopes it can continue its run of good play against in-state opponents when it travels to face another District 4-AAA foe Farragut on at 6 p.m. Thursday.

“I feel good about this team,” Keeble said. “We played some of the best of the best in Louisville, and it really kind of helped us understand where we are and what we need to do when we get in those situations (against the best teams).

“Tonight was a good win because that could have gone either way.”