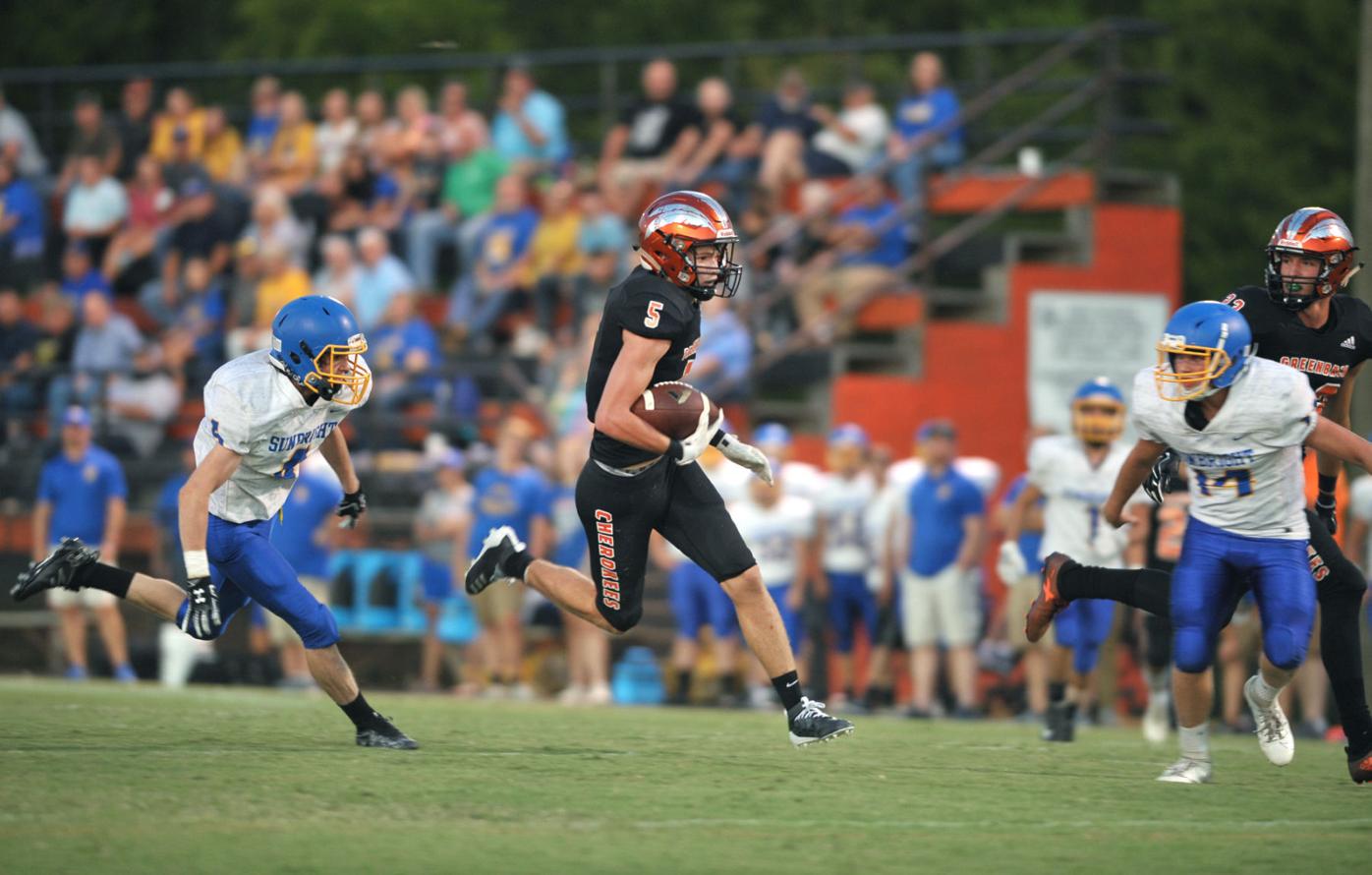 Greenback’s Blake Fields (5) races to the end zone for a 36-yard touchdown reception against Sunbright in a region win at Greenback on Sept. 6, 2019. 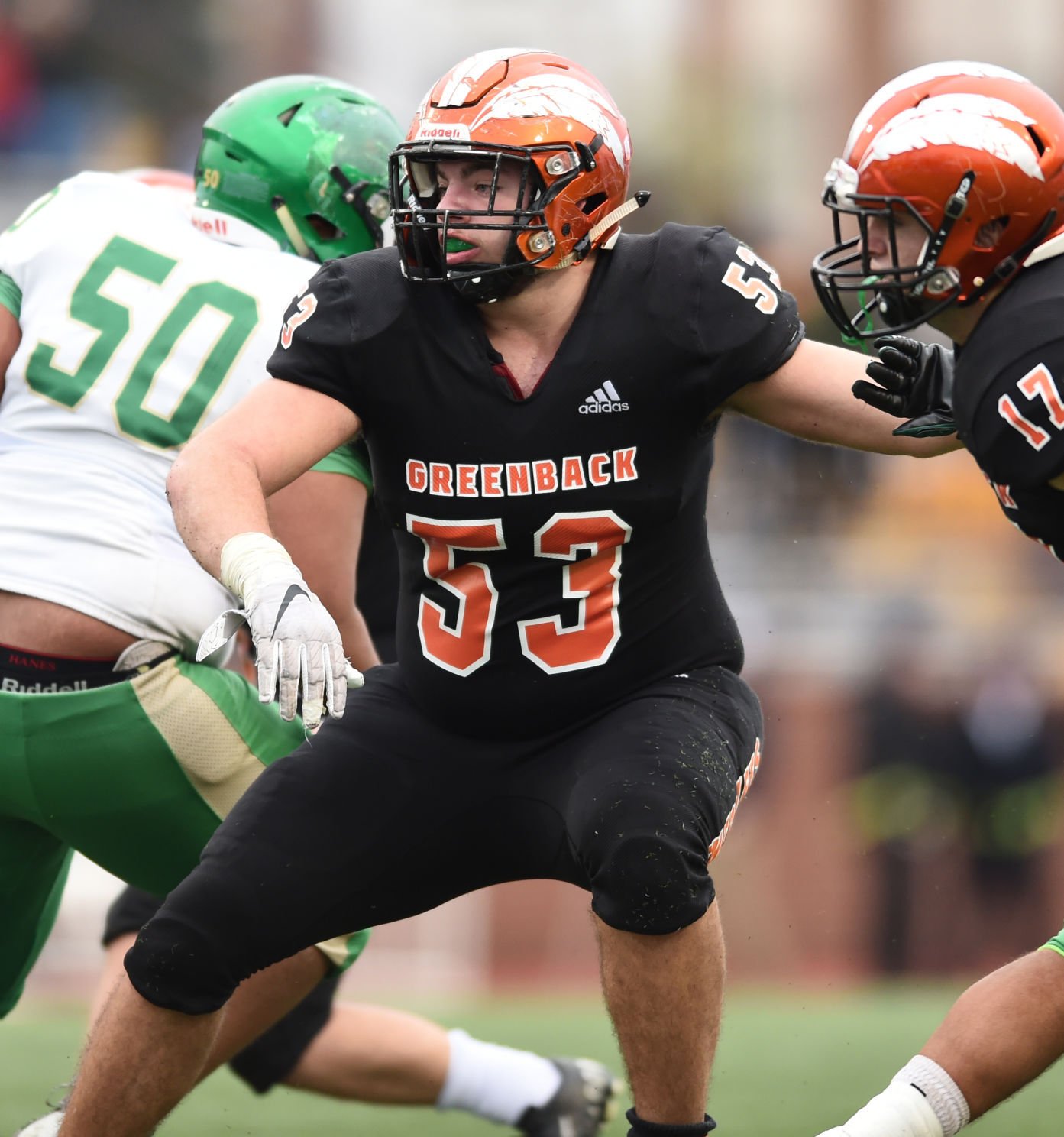 Greenback School’s Tyler “Bubba” Jeffries protects the pocket on Dec. 6 in the Cherokees’ 38-23 loss to the Lake County High School Eagles in the Class 1A BlueCross Bowl. 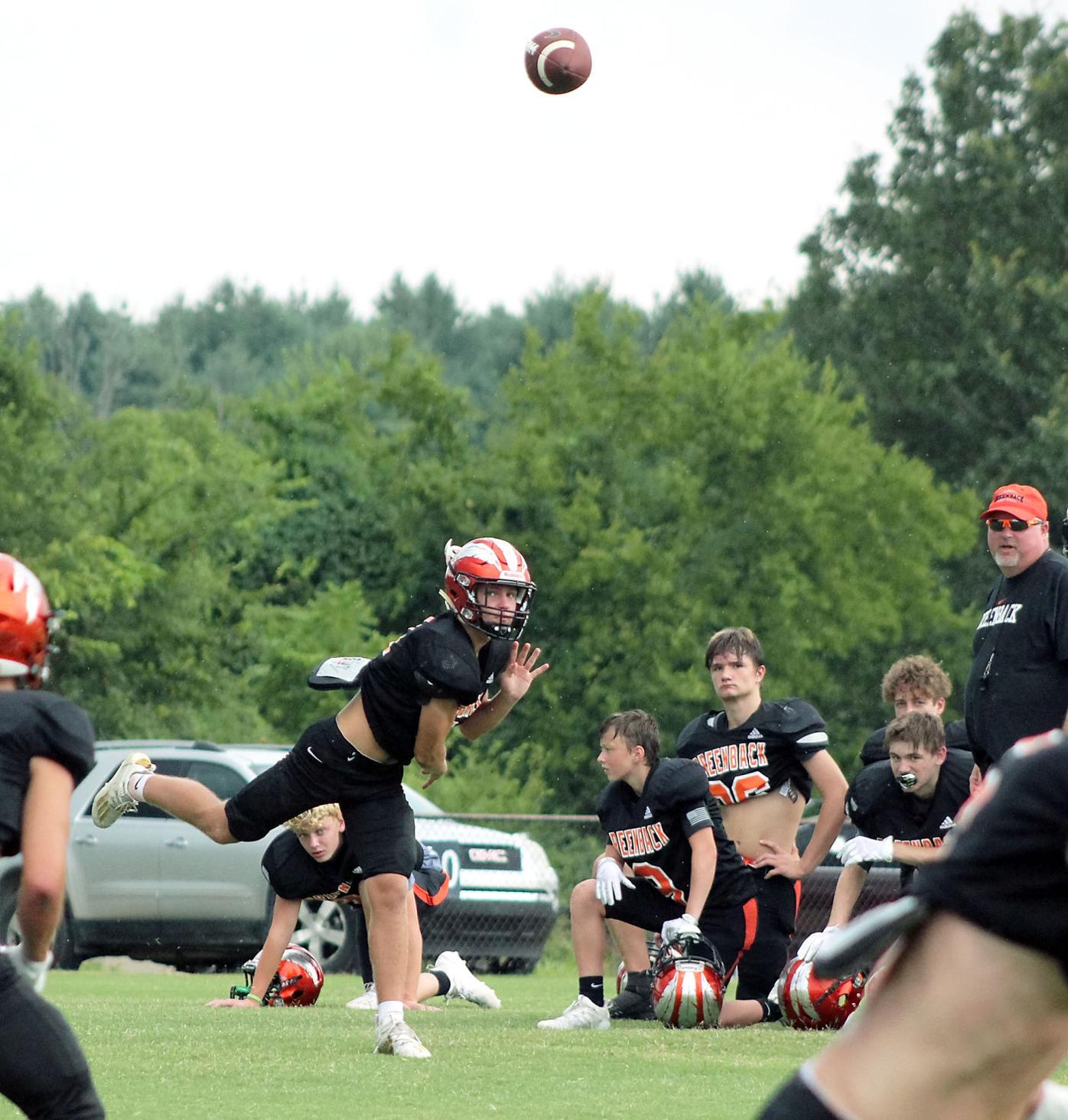 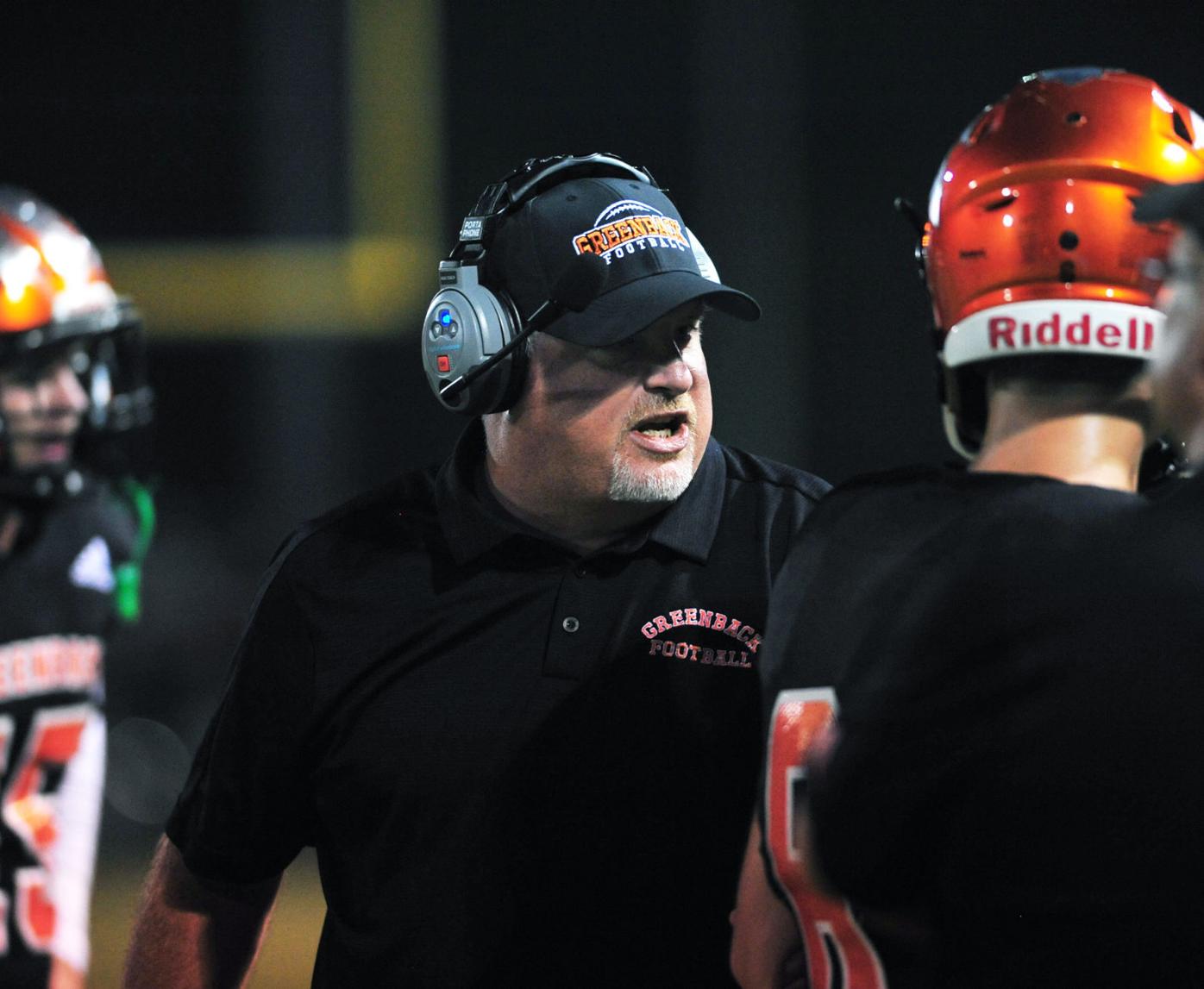 Greenback’s head coach Greg Ryan fired up on the sideline on Sept. 20 against Oliver Springs.

Greenback’s Blake Fields (5) races to the end zone for a 36-yard touchdown reception against Sunbright in a region win at Greenback on Sept. 6, 2019.

Greenback School’s Tyler “Bubba” Jeffries protects the pocket on Dec. 6 in the Cherokees’ 38-23 loss to the Lake County High School Eagles in the Class 1A BlueCross Bowl.

Greenback’s head coach Greg Ryan fired up on the sideline on Sept. 20 against Oliver Springs.

A year ago, Greenback was tasked with replacing the winningest senior class in program history and did so with experienced players that were waiting in the wings and several transfers that propelled it to its fourth Class 1A BlueCross Bowl berth in five years.

The Cherokees enter this season looking to reload once again, but this time they will do it in a much different fashion.

“The bottom line is that I have 43 kids on the football team and 19 of them are freshmen,” Greenback coach Greg Ryan told The Daily Times. “It’s a lot of new kids, but all those kids, whether they are ready to play this year or not, they love the game and they’re used to playing football.

“Last year, we had a lot of guys with a lot of experience and there wasn’t as much teaching that we had to do because they knew it from years before. This year, we’re having to change things up a little bit, but that is nothing new to them because they didn’t know what we did last year.”

Greenback opens the season on the road against rival Loudon at 7:30 p.m. Friday. The Redskins cruised to a 54-20 victory over the Cherokees in last season’s opener.

A young roster comes with changes that will set this Greenback team apart from those of the past.

Bryce Hanley threw for 2,578 yards and 28 touchdowns en route to being named Tennessee Titans Class A Mr. Football in 2018. Braden Carnes became the second quarterback in TSSAA history to throw for more than 50 touchdowns last season, tossing 52 while logging 4,116 yards through the air.

The high-powered offense that those two signal callers operated over the last three years will now focus on ball control with freshman quarterback Brennen Duggan taking over under center.

Duggan can develop into a quarterback capable of putting up video-game numbers, but it will take time.

“It’s definitely different, but where it is the most different in my mind is that playbook is narrower,” Ryan said. “We’re not going to go into the first game with 15 different route combinations — we might go in with seven or eight. Each day is going to be a teaching day, and because of that, it’s a slower process.

“We’ll get it, and by the middle of the season we should be just fine. I have all the confidence in Duggan and so does the team, and that’s the biggest thing.”

Duggan will be surrounded by an entirely new cast of playmakers after the graduations of wide receivers Holden Willis and Duke Stinnett and running back Wyatt Rutgerson — a trio that accounted for 4,384 of Greenback’s 5,900 total yards last season (74.3%).

Greenback hopes it can replace Rutgerson in the backfield with William Blount transfer Micah Franklin, but it is waiting to hear back from the TSSAA regarding a hardship waiver for the running back. Franklin logged 1,265 yards from scrimmage last season — the only offensive weapon with more than 600 such yards for the Governors.

“I feel the pressure every day,” Fields said. “I’ll be lining up and be thinking, ‘Dang, I have to do everything that he did.’ He could beat somebody and go every time, and I want to take my game to his game. It’s going to be hard, but I think I can do it.”

As Greenback attempts to piece together a new-look offense, it will lean on its defense to continue its run as one of the premier programs in Class 1A over the past half-decade.

Burger will be joined in the second level by sophomore Ashton Orr, who Jeffries believes will be a “stud” by the middle of the season.

Senior Winston Ward and Fields are the two most experienced members of a secondary that has a lot to prove behind what should be a stout front seven.

“We’re pretty confident with how our defense is set up right now,” Jeffries said. “We should tear it up this season.”

The Cherokees believe this season will be no different than those in the past, with Ryan stating “anytime we play a 1A team, regardless of who it is, we expect to win,” but there will be a learning curve.

Greenback is no stranger to that either, losing its first two games last year as it tried to develop chemistry within a new starting lineup. Twelve straight victories and a state runner-up finish followed, and the Cherokees believe a similar outcome is possible this season.

“I’m pretty sure a lot of people are going to be surprised with what we have going on this year,” Jeffries added. “We’re trying to repeat what we did last year and then try and win (a state championship). That is what motivates all of us every day.”

Blake Fields hauled in 17 catches for 412 yards and five touchdowns as the fourth option in the passing game behind Tennessee Titans Class 1A Mr. Football winner Holden Willis, Duke Stinnett and Wyatt Rutgerson, but the senior wide receiver is primed for an important role as freshman quarterback Brennen Duggan's No.1 option.

Tyler Jeffries and River Steele replace Derrell Bailey Jr. and Hazen Carlton at the offensive tackle positions this season. The duo, along with the three interior offensive lineman, will have to protect Duggan and pave the way for a running game that could be the focal point of the Cherokee's new ball-control offense.

Take your pick. The Cherokees will have to replace the second quarterback in TSSAA history to throw for more than 50 touchdowns in Braden Carnes, two 1,000-yard receivers in Holden Willis and Duke Stinnett, a running back who had more than 1,2000 yards from scrimmage in Wyatt Rutgerson and two college-level linemen in Hazen Carlton and Derrell Bailey Jr.

The rivalry between Greenback and Oliver Springs has escalated in recent years, as evidenced by Greenback running up the score late in last season's regular season victory. The Bobcats are the only team capable of knocking the Cherokees off their Region 2-A throne, and the two will meet at Oliver Springs on Sept. 18.

32: The Cherokees enter the 2020 season with a 32-game winning streak against region opponents. Their last loss came against Grace Christian - Knoxville on Oct. 17, 2014.

48: Greenback has 48 wins against Class 1A teams over the past five years. Its only losses have come in state semifinals or the BlueCross Bowl.

LAST SEASON: A team that featured a bunch of new starters struggled in the early going as it developed chemistry, losing to Loudon and Meigs County in the first two games before reeling off 12 straight wins to reach the Class 1A BlueCross Bowl for the fourth time in five years. The Cherokees suffered a loss in the biggest game of the season, however, falling to Lake County.