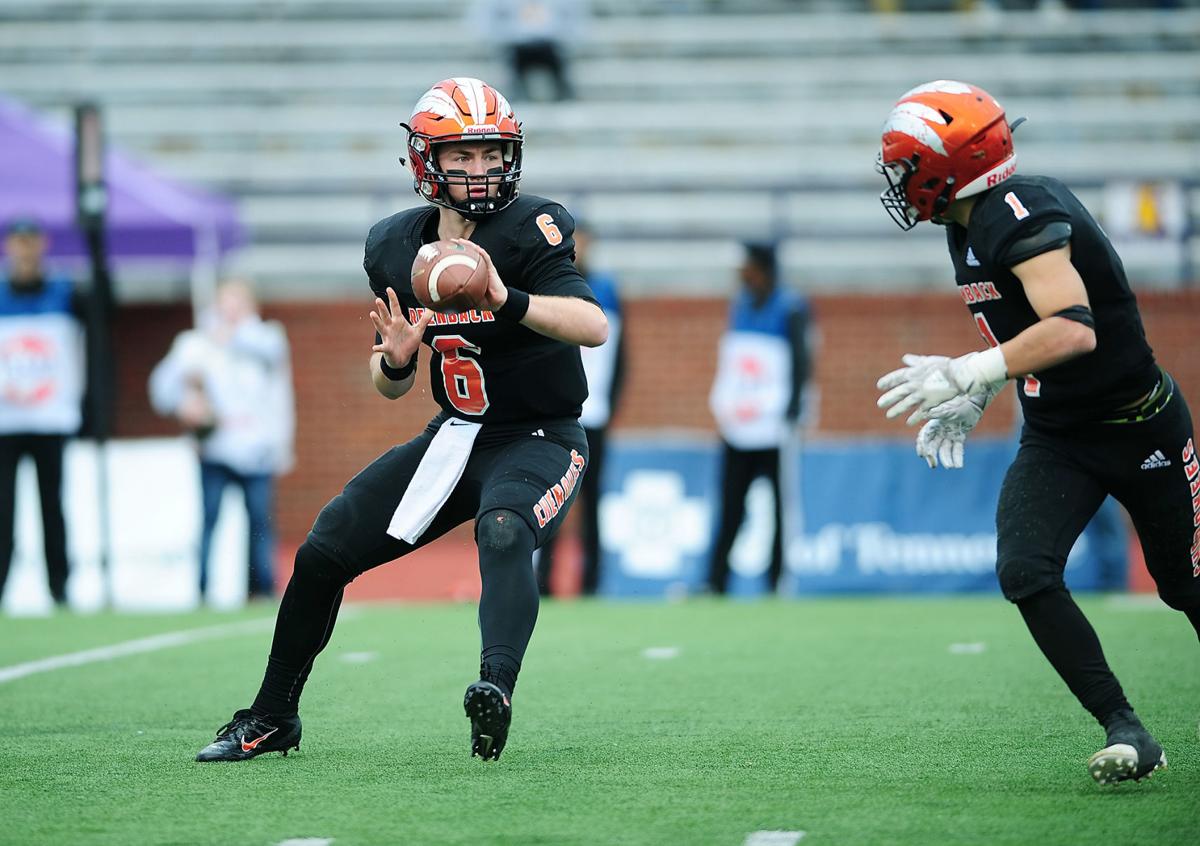 Braden Carnes (6) pitches the ball to Wyatt Rutgerson (1) in Friday’s 38-23 loss to Lake County in the state championship game in Cookeville. 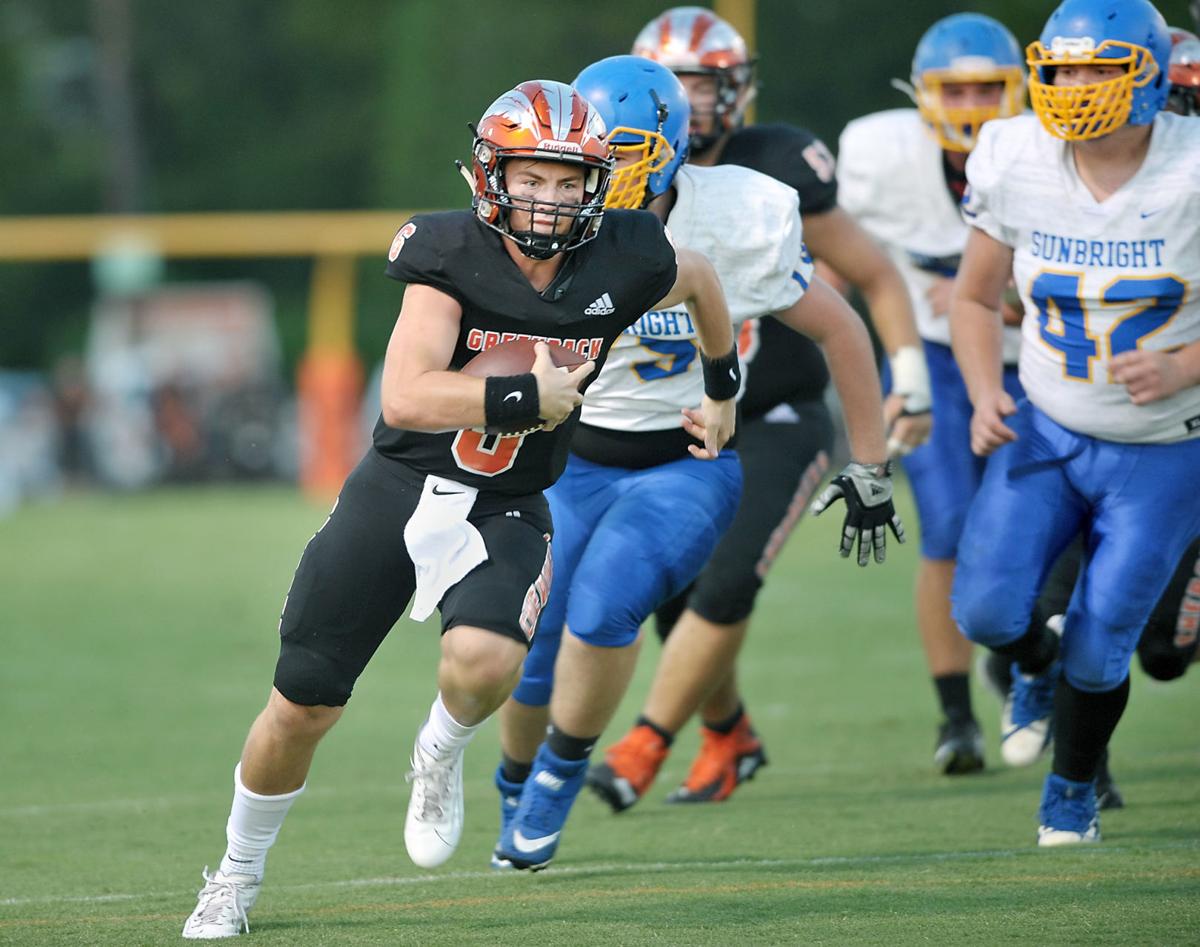 Greenback’s Braden Carnes (6) turns upfield on his 12-yard run for the Cherokee’s fourth touchdown of the first quarter in their 61-20 win over Sunbright. Carnes committed to Louisville on March 10 and is motivated to “prove a lot of people wrong” after a slow recruiting process

Braden Carnes (6) pitches the ball to Wyatt Rutgerson (1) in Friday’s 38-23 loss to Lake County in the state championship game in Cookeville.

Greenback’s Braden Carnes (6) turns upfield on his 12-yard run for the Cherokee’s fourth touchdown of the first quarter in their 61-20 win over Sunbright. Carnes committed to Louisville on March 10 and is motivated to “prove a lot of people wrong” after a slow recruiting process

Hundreds of quarterbacks around the country signed National Letters of Intent over the past three months.

Braden Carnes was not one of them.

The Greenback senior garnered minimal collegiate interest amid a prolific season in which he threw for more touchdowns than most of the signal callers who already landed scholarship offers, but he never let that get to him.

Carnes believed the film, the numbers and the accomplishments spoke for themselves and a school would come calling.

A slow recruiting process finally came to an end March 10 when he committed to Louisville.

“I worked really hard for this opportunity,” Carnes told The Daily Times. “Quarterbacks usually get recruited after their sophomore year, but me splitting time my junior year at Maryville and not having a ton of film kind of put me behind the 8-ball a little bit.

“I knew the process would be longer than I wanted, and sometimes it was tough, but I kept the faith that it would happen and now I’m ready to prove a lot of people wrong.”

Carnes will grayshirt, meaning he will walk on in the fall before receiving a scholarship in the spring after the season because Louisville already signed its allotted 25 scholarship players for the Class of 2020.

The relationship between Carnes and Louisville started with the occasional check in from a Louisville graduate assistant during the season as Carnes ranked first in the state in passing yards (4,141), touchdowns (52), average passing yards per game (276.1) and quarterback rating (134.0) while completing 62.6% (196-of-313) of his passes to be named The Daily Times Offensive Player of the Year.

Louisville quarterback coach Frank Ponce joined the conversation a couple months ago and a campus visit sealed the deal, turning the words of encouragement that defined his recruitment into celebratory remarks.

“The amount of love and support I’ve been shown meant a lot to me,” Carnes said. “People would come up to me and say, ‘Keep your head up. Things are going to work out,’ and that gave me motivation to prove all the schools that weren’t looking at me wrong and do it for all the people who have supported me, have loved me and have pushed me for so many years through whatever I was going through.”

His physical measurables of 6-feet tall and 188-pounds were part of it, but being a part of a two-quarterback system with Indiana State signee Cade Chambers his junior year at Maryville set him back as well.

He transferred to Greenback on June 12 and was labeled a “system quarterback” after putting up what Greenback coach Greg Ryan described as “video game-like numbers” while leading the Cherokees to their fourth Class 1A BlueCross Bowl appearance in the past five years.

It turns out the success he had in a similar spread offense is one of the things Louisville liked most about Carnes, along with his natural arm talent.

Carnes will need to utilize both knowledge and skill to make a name for himself in a crowded quarterback room that includes redshirt senior Jawon Pass, redshirt junior Micale Cunningham and sophomore Evan Conley, all of whom played a year ago.

Carnes will likely open his collegiate career as an afterthought to most, but that is nothing new to the quarterback who spent so much time being overlooked.

“I’ve had a chip on my shoulder my whole life,” Carnes said. “I’ve never been the fastest or most athletic. I’ve definitely not been the tallest, but I just continued to grind and embraced the grind. There is no substitute for hard work. That’s something my dad and my granddad taught me at a very young age and it’s something that I took to heart.

“If you work hard and leave it all out there, there really is nothing anybody can say to you.”