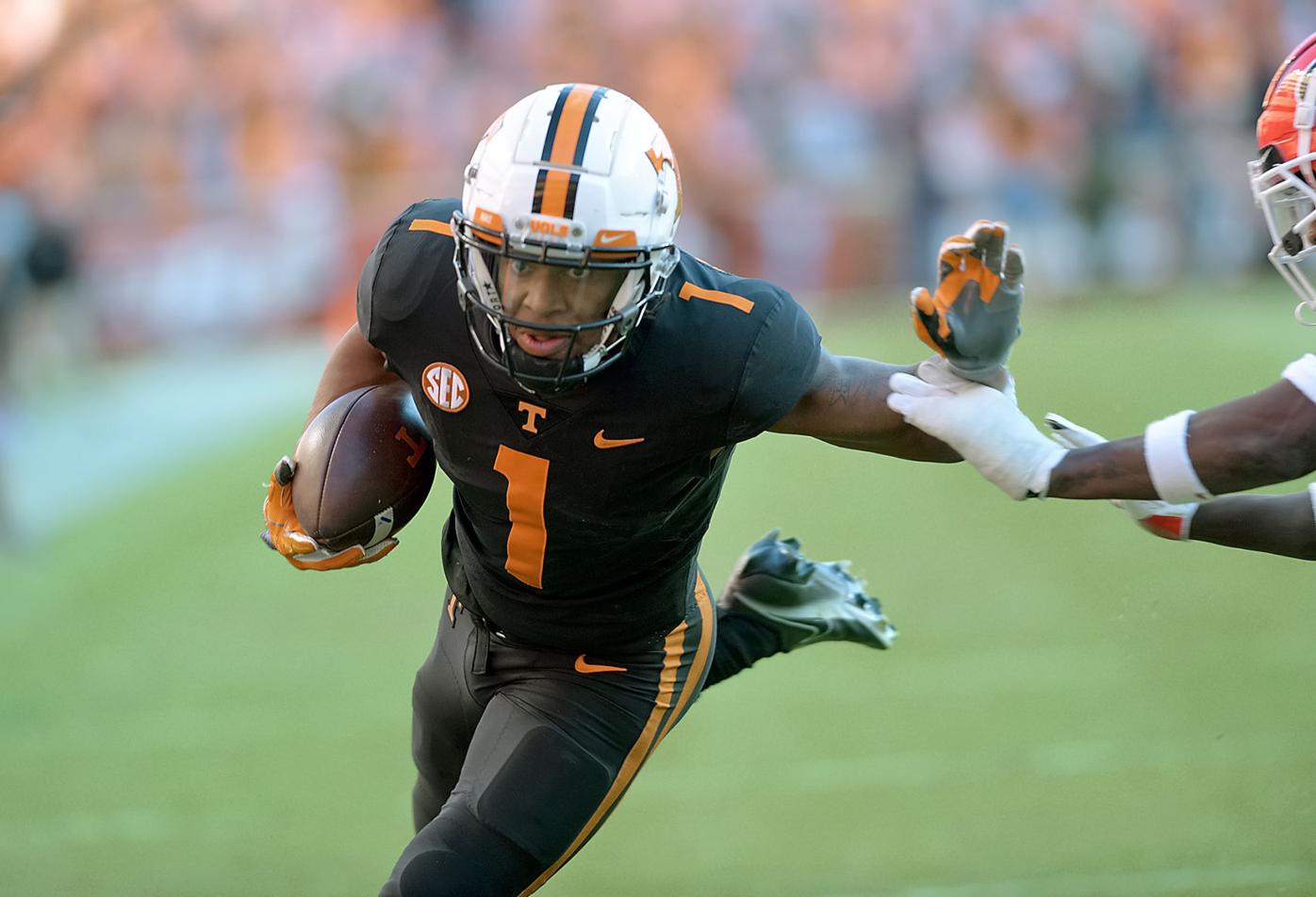 Velus Jones Jr. (1) sprints to the pylon to start the scoring on Nov. 13 at Neyland Stadium. The Bulldogs walked away with a 41-17 win. 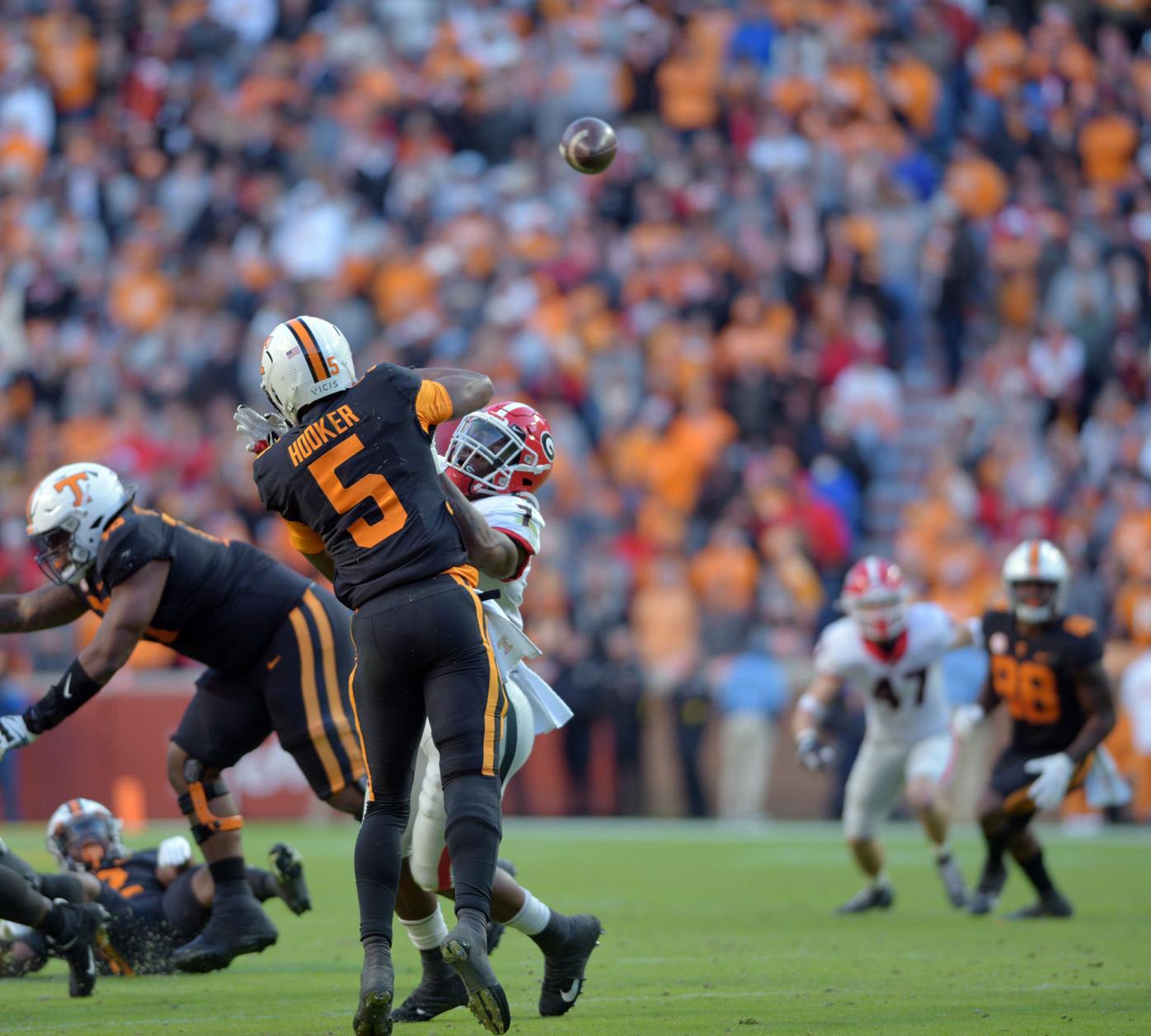 Hendon Hooker completes a pass to Princeton Fant (88) with Georgia's Quay Walker (7) in his face. The Vols lost the game, 41-17, to the Bulldogs on Nov. 13 at Neyland Stadium.

Velus Jones Jr. (1) sprints to the pylon to start the scoring on Nov. 13 at Neyland Stadium. The Bulldogs walked away with a 41-17 win.

Hendon Hooker completes a pass to Princeton Fant (88) with Georgia's Quay Walker (7) in his face. The Vols lost the game, 41-17, to the Bulldogs on Nov. 13 at Neyland Stadium.

KNOXVILLE — When then-Virginia Tech quarterback Hendon Hooker entered the transfer portal last January, one of the first people he reached out to was Tennessee wide receiver Velus Jones Jr.

Hooker, who had started 15 of 24 games the previous three seasons at Virginia Tech, was considering the Tennessee program, which was then being led by former head coach Jeremy Pruitt.

“I’m just extremely blessed to be in this position,” Hooker said. “Velus was one of the first guys that I hit up when I was thinking about coming to Tennessee. He told me, like, you know, we need a quarterback. We’ve got every other piece to get things operating smoothly, so just being around him and the other guys welcoming me into this family has been nothing but a blessing.”

Now both Jones and Hooker are helping lead a remarkable turnaround season for a program that won just three games a year ago, fired its coach and lost more than 20 players to the transfer portal.

In head coach Josh Heupel’s first season, the Vols (6-5, 3-4 SEC) are averaging more than 460 yards and 38 points per game and Hooker is leading the charge with 24 touchdown passes and 2,411 yards ever since taking over the starting job in week three against Tennessee Tech.

His quarterback rating of 183.43 is second only to Alabama quarterback and Heisman Trophy hopeful Bryce Young.

According to Hooker, the team’s precision in scoring as fast as possible with average scoring drives ending in less than two minutes is a mindset it has adopted from Heupel.

“Just being ready to go,” Hooker said. “It’s a mindset. Just coming out and trying to be perfect. Pretty much just trying to be as efficient as we can and move the ball as fast as we can (and) get the ball to the end zone.”

Jones has been just as instrumental in that success.

Like Hooker, Jones’ journey to Tennessee took a detour. For the Saraland, Alabama native, it was through Los Angeles where he played four seasons at Southern Cal as a dynamic wide receiver and returner on special teams before transferring to the Vols ahead of the 2020 season.

In Jim Chaney’s offense under Pruitt, Jones had 22 catches for under 300 yards and three touchdowns, but in Heupel’s system, he’s proven to be more of a weapon in two areas.

At receiver, Jones has caught 50 passes for 700 yards and six touchdowns while being just as lethal on special teams with 728 total return yards. He broke through multiple tackles for a 96-yard kickoff return for a touchdown last week against South Alabama.

“I’d say kickoff returner started back in the park league when I was younger,” Jones said. “And so I always had a vision for it. Of course, back in high school I returned punts and kickoff returns. I had a kickoff called to the house in high school as well. I had one at USC and I had one (Saturday). I would say (my) vision and physicality. Better to run through arm tackles and I’m blessed with speed. Family genetics.”

Jones and Hooker’s second act at Tennessee has been beneficial for the program, which will play for a bowl game next month with a chance for an 8-win season depending on how Saturday’s regular season finale against Vanderbilt (2-9, 0-7 SEC) at Neyland Stadium goes, but it’s been a beneficial experience for them, too.

“It just shows you what God has in store for you,” Jones said. “You never know what’s going to happen next and what lies ahead of you. I thank God for talking me into coming to this university and I’ve been loving it ever since. It’s been quite a journey since I’ve been here with (different) coaches and everything but overall ... I’m thankful for the opportunity, especially with these new coaches. ... I couldn’t have written a story any better.”