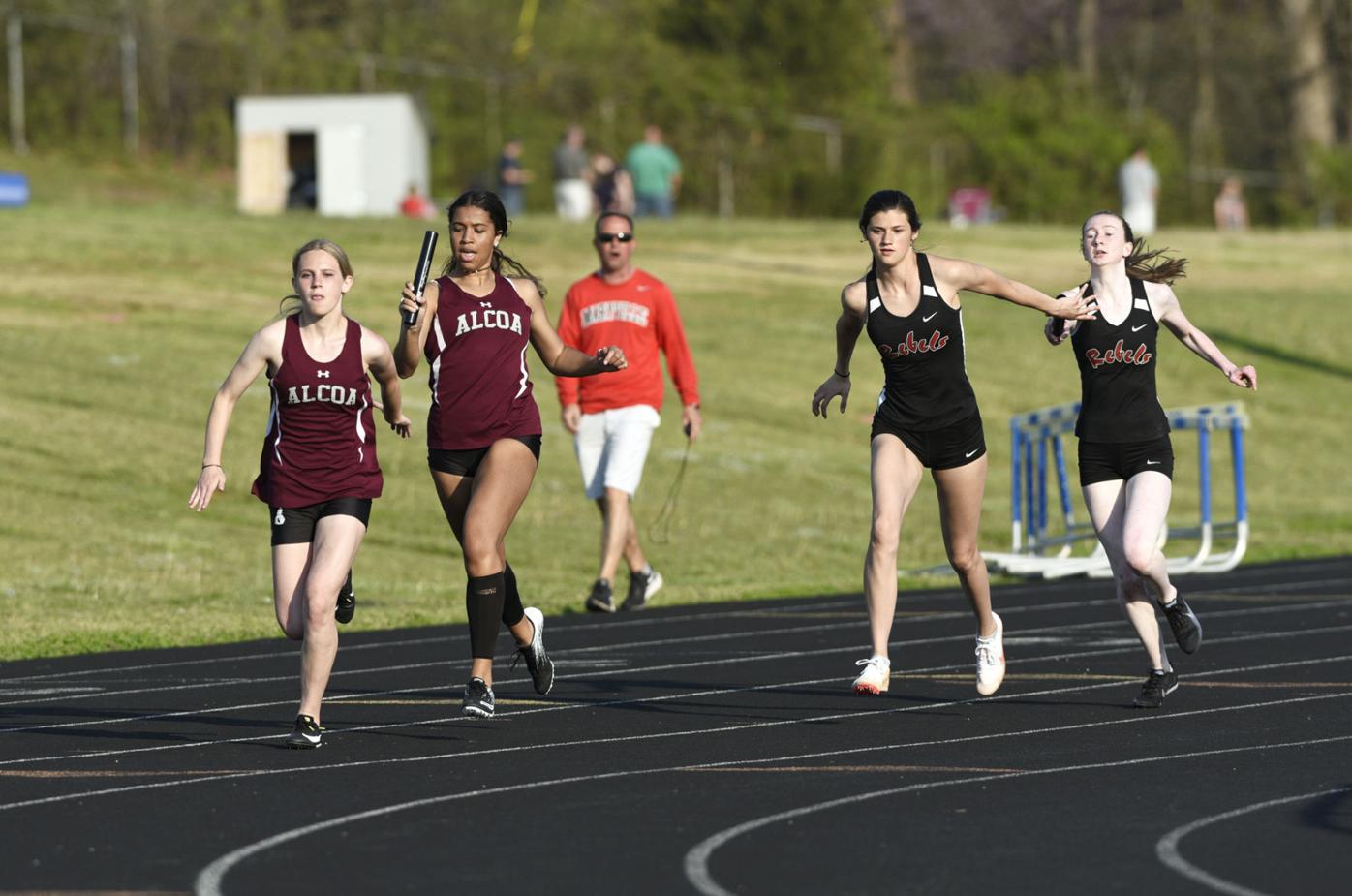 Alcoa’s Olivia Baumann and Asia Cole, and Maryville’s Kendall Whitehead and Jasmine Mayden make the exchange of the baton during the girls 4x200 relay on Tuesday at Mike White Field. 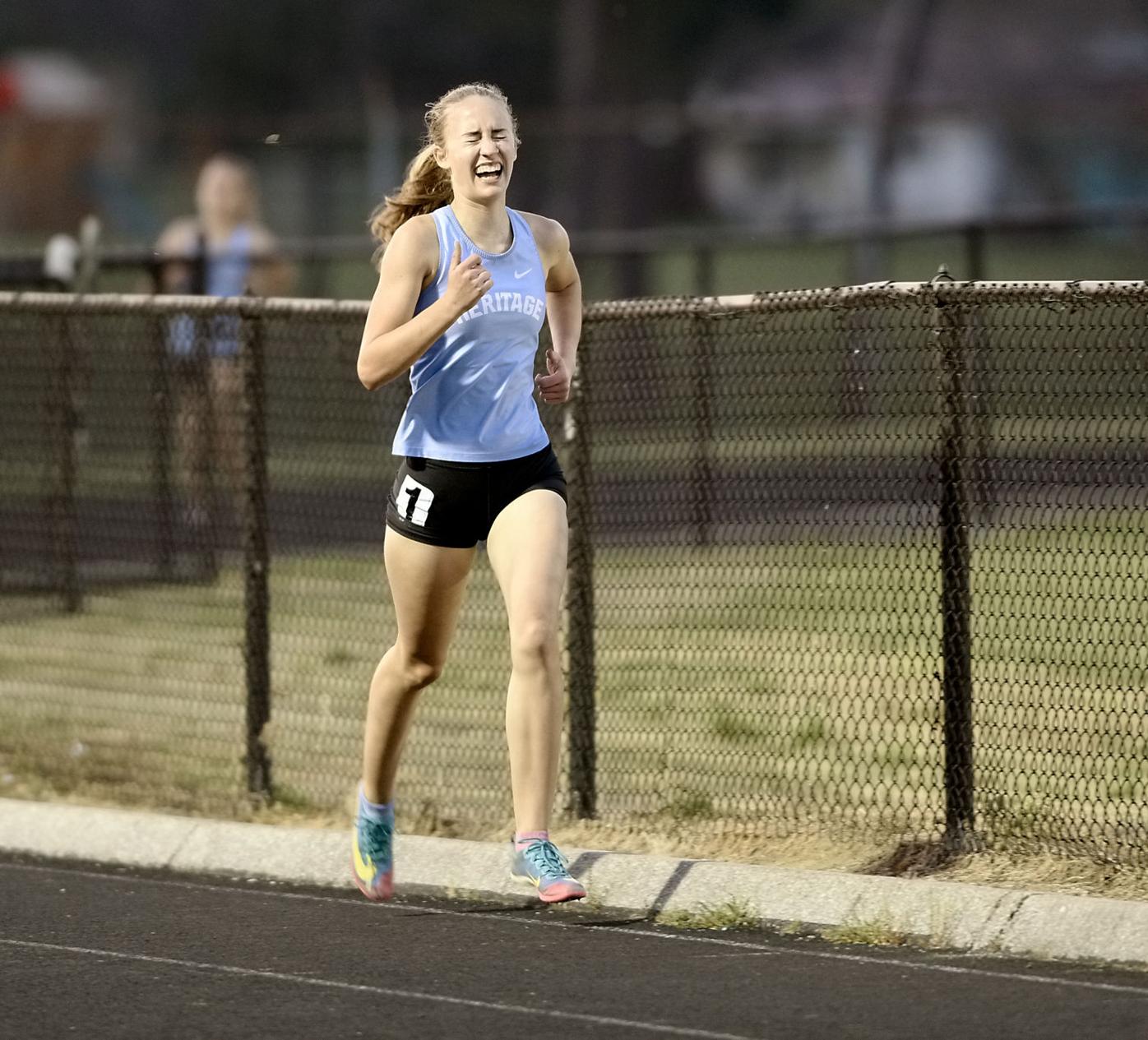 Heritage’s Grace Adams battles through the pain as she pulls away from the pack to win the 1600 m heat at the William Blount Open on Tuesday night at William Blount High School. 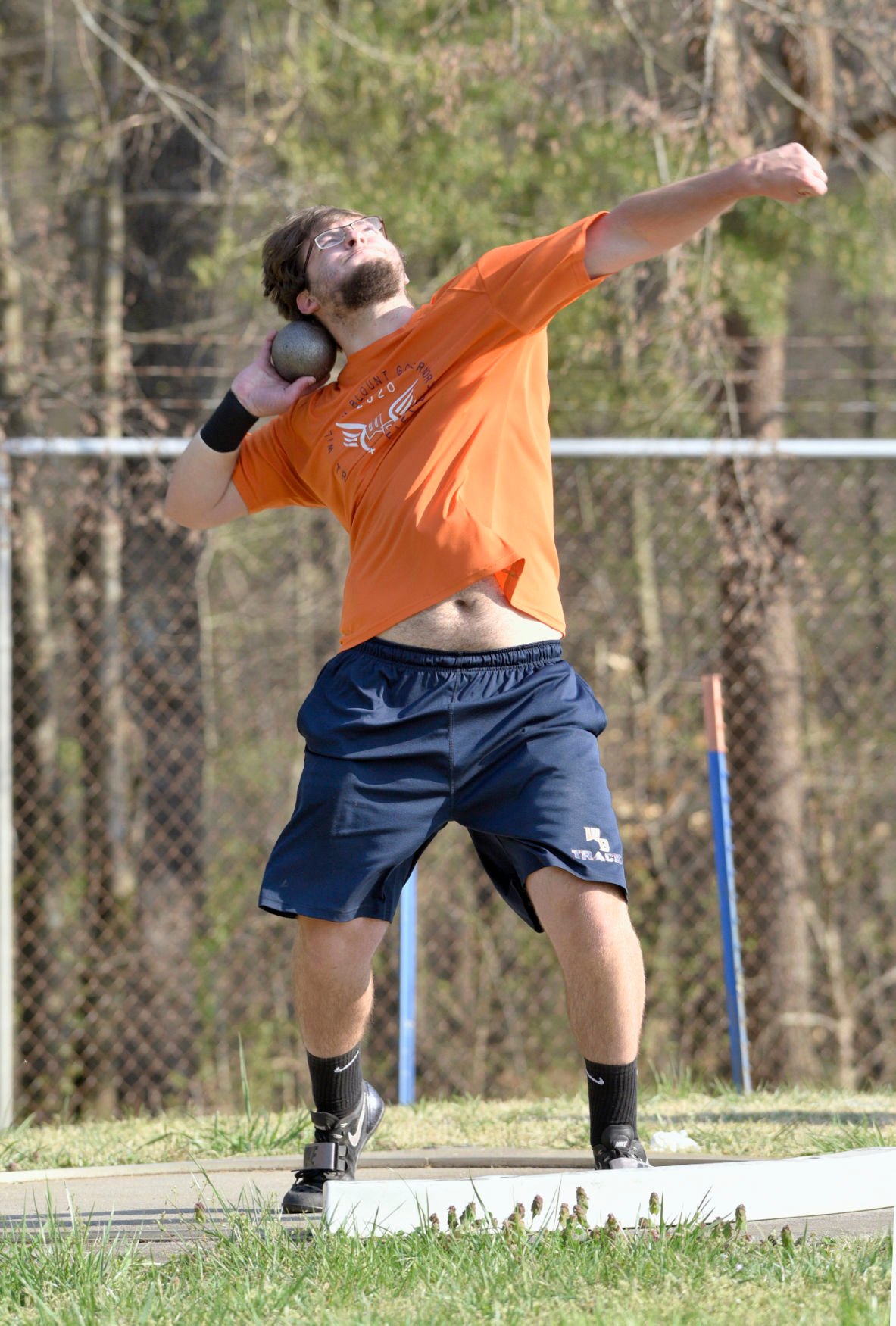 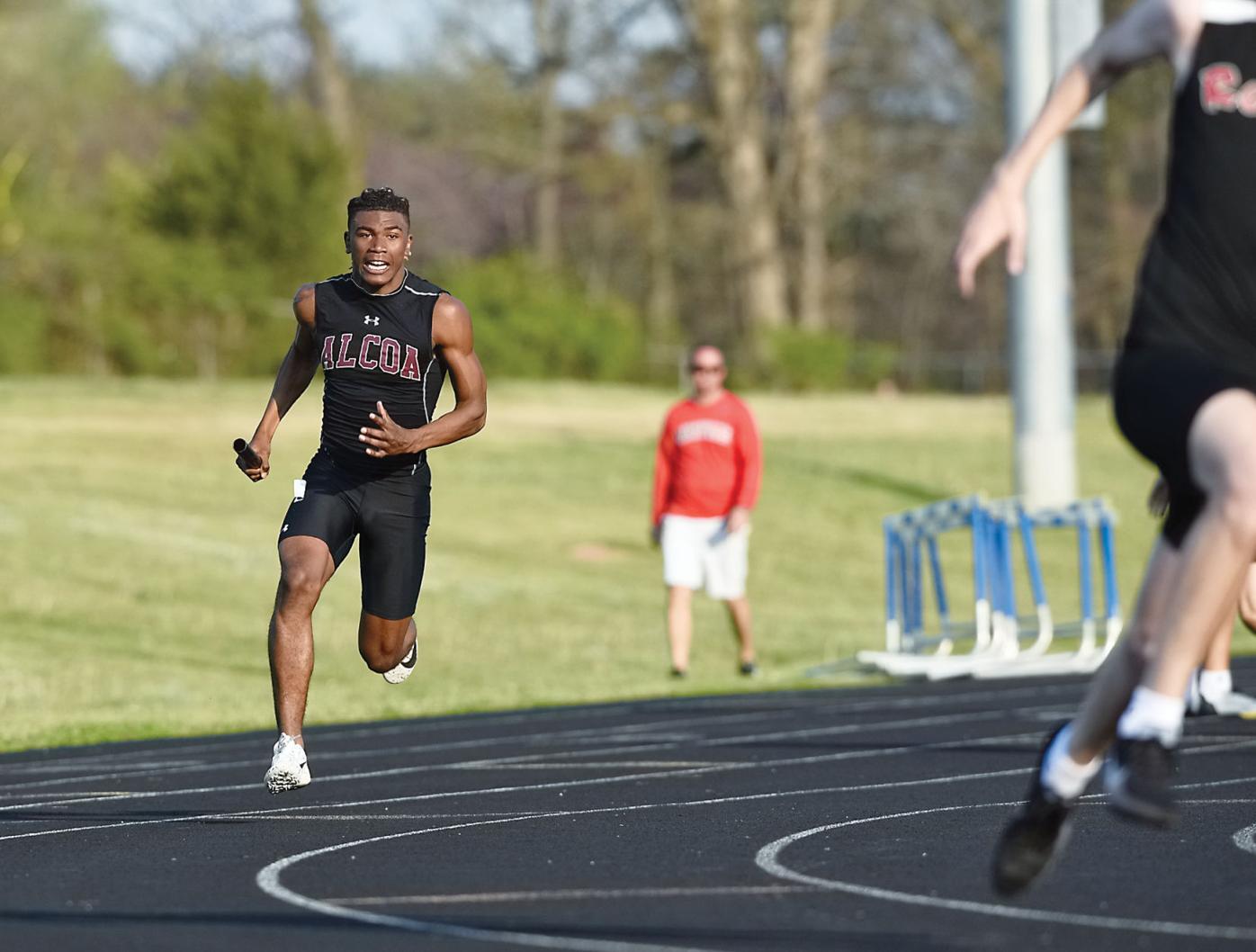 Alcoa’s Jordan Harris heads into the turn following a bobbled exchange on the anchor leg of the boys 4x200 on Tuesday during the William Blount Open.

Alcoa’s Olivia Baumann and Asia Cole, and Maryville’s Kendall Whitehead and Jasmine Mayden make the exchange of the baton during the girls 4x200 relay on Tuesday at Mike White Field.

Heritage’s Grace Adams battles through the pain as she pulls away from the pack to win the 1600 m heat at the William Blount Open on Tuesday night at William Blount High School.

Alcoa’s Jordan Harris heads into the turn following a bobbled exchange on the anchor leg of the boys 4x200 on Tuesday during the William Blount Open.

The members of Heritage’s 4x800 relay team — junior Maggie Hope, freshman Laura Jones, sophomore Katie Calkins and junior Grace Adams — admitted they were all nervous before their race at the William Blount Open on Tuesday at Mike White Field.

They had good reason to be. They were about to compete in their first relay together. Adams, the team’s anchor, suggested to her teammates that they pray before the race to alleviate their anxiety.

“This is the first year that we’ve had a girls 4x800 since I’ve been at Heritage,” Adams told The Daily Times. “We practiced exchanges, but we never ran a full 4x800. … We said a prayer just to help calm our nerves.”

It didn’t take long for those pre-race jitters to dissolve into joy. When Adams received the baton, her relay team was in third. Adams passed both Webb and Maryville’s runners on the final leg of the relay to propel Heritage to a first-place finish. Adams cruised to a first-place finish in the 1600 meter race to punctuate her performance at Tuesday’s meet.

The dramatic finish in 4x800 relay rendered Heritage’s long-distance coach, Alex Morgan, speechless. All he could do was give his runners high fives and tell them that he was proud of them.

“I really didn’t have any expectations, to be honest,” Morgan said. “I just wanted them to get a feel for it because it’s been two years for all those girls and kids. For some of them, it was their first race ever in track, so it’s really impressive to see them go out there and run the way they did. They put in a lot of work. They are really consistent, and I’m really proud of them.”

Heritage’s four runners entered this season hoping to qualify for sectionals. They admitted on Tuesday that they might have to recalibrate their expectations after their performance on Tuesday.

“Considering it’s their first race, I think there is a lot of room to grow,” Morgan said. “I always tell the kids that the first race is a good base to get you where you need to be and see where you are at and go from there. As time goes on, you are going to get a feel for how track meets go and how to race. Over time, you are going to improve. Inevitably, I see them improving a lot.”

Centers set personal record: When Centers was 7 or 8 years old, he told his brother that he was one day going to become a better athlete than him. For the last six years, he labored tirelessly to accomplish that goal.

His hard work has paid off. He qualified for state in discus when he was eighth grade. Last August, he placed eighth in discus at the AAU Nationals with a personal-best distance of 148 feet and 4 inches. And in November, he signed a letter of intent to compete for Indiana Tech’s track and field in team.

“I guess in layman’s terms I beat my (older brother),” said Centers, laughing. “I’m better than him.”

Centers continued to excel on Tuesday, winning both the shot put and the discus event. He even shattered a personal record in shot put with a score of 49-1.

“I did way better than I expected (today),” Centers said. “I was tired and sore from training last night, but I opened up really nice with a 148-1 in the discus. … I will most definitely take it.”

McCallum’s promising future: Maryville freshman Hayes McCallum doesn’t mind racing against older girls. She admits that she gets nervous before races, but that’s OK. Those pre-race nerves are one of the reasons why she loves running in the 100 meter hurdles.

Her last two races suggest she has a promising future in the sport. She finished third in the 100 meter hurdles at the Farragut Invitational with a time of 17.02 seconds. She won the same race on Tuesday evening.

“She brought a very aggressive attitude to things, and I think being around older girls didn’t intimidate her at all,” Maryville hurdles coach Will Jay said. “I think for Hayes, who knew technique fairly well with the hurdles, it was just a matter of training with girls like that everyday that helped her bring her times down even faster.

“I think our team in general has a lot of freshman and sophomores. … The numbers speak to this being a somewhat young team. I think her along with a couple of others are going to be those leaders who take us contention to win future state championships.

Alcoa football player making most of offseason: Jordan Harris began running track with one purpose in mind. The Alcoa sophomore wants to play football at the Division-I level, and he knew that participating in track would help him become a better football player.

He said he’s already seeing results from his time on the track this season.

“It’s helped me with my breathing,” said Harris, who started in Alcoa’s secondary last fall to help the Tornadoes win their sixth straight championship. “It helps with your speed and with your stamina. … It has helped me get faster so that, if I am anywhere in the open field, I won’t really get caught.”

He also admitted he’s beginning to enjoy the sport in its own right — probably because he continues to experience success. On Saturday, Harris finished with a time of 23.34 seconds to place fifth in the 200 meter race at the Farragut invitational. On Tuesday, he placed first in the 100 meter race in the William Blount Open.

“It’s a good feeling,” Harris said. “But you’re so tired afterward because you’ve done so much, but it feels good (to win).