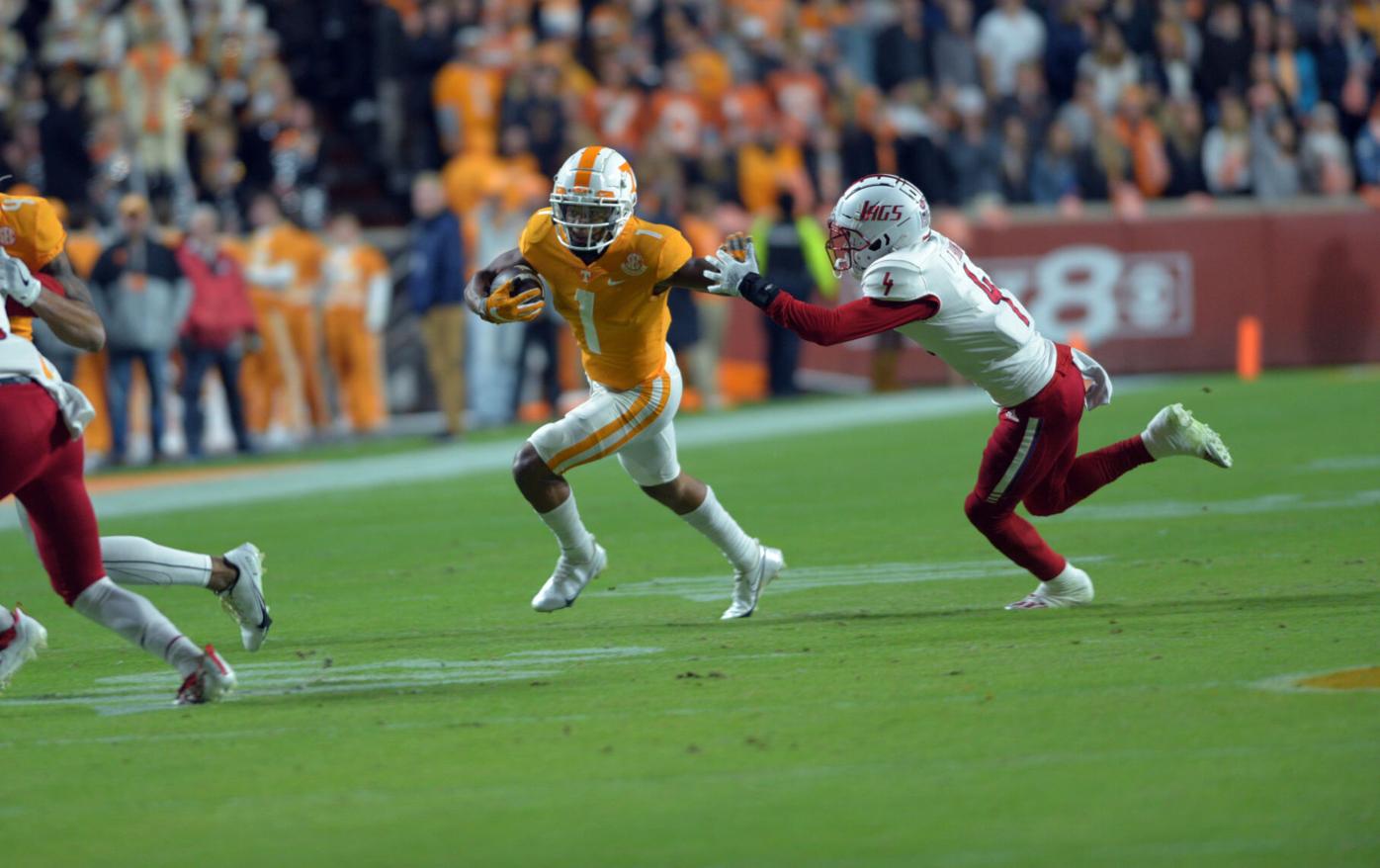 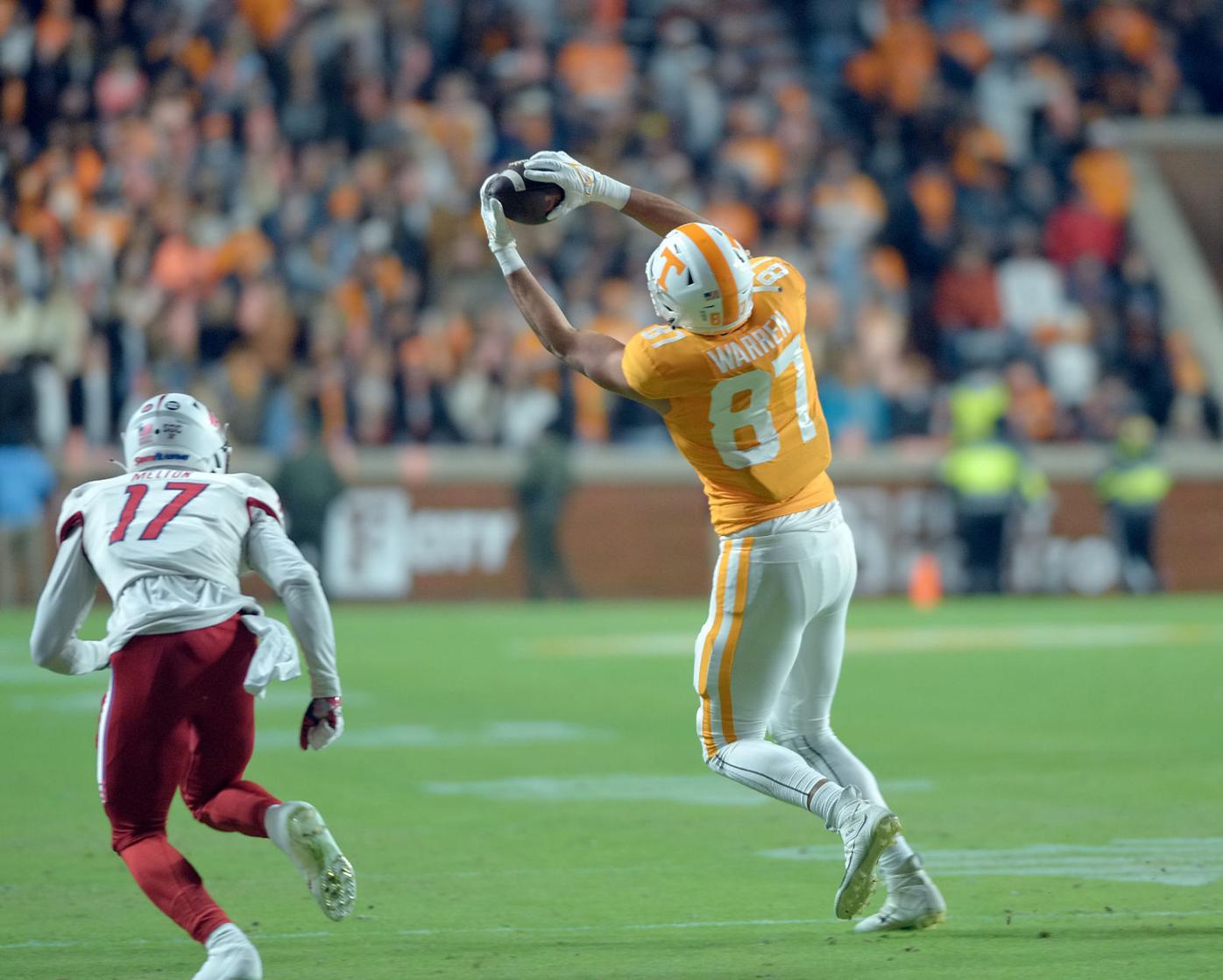 Jacob Warren (87) pulls in a pass from Hendon Hooker in Saturday's 60-14 win at Neyland Stadium. 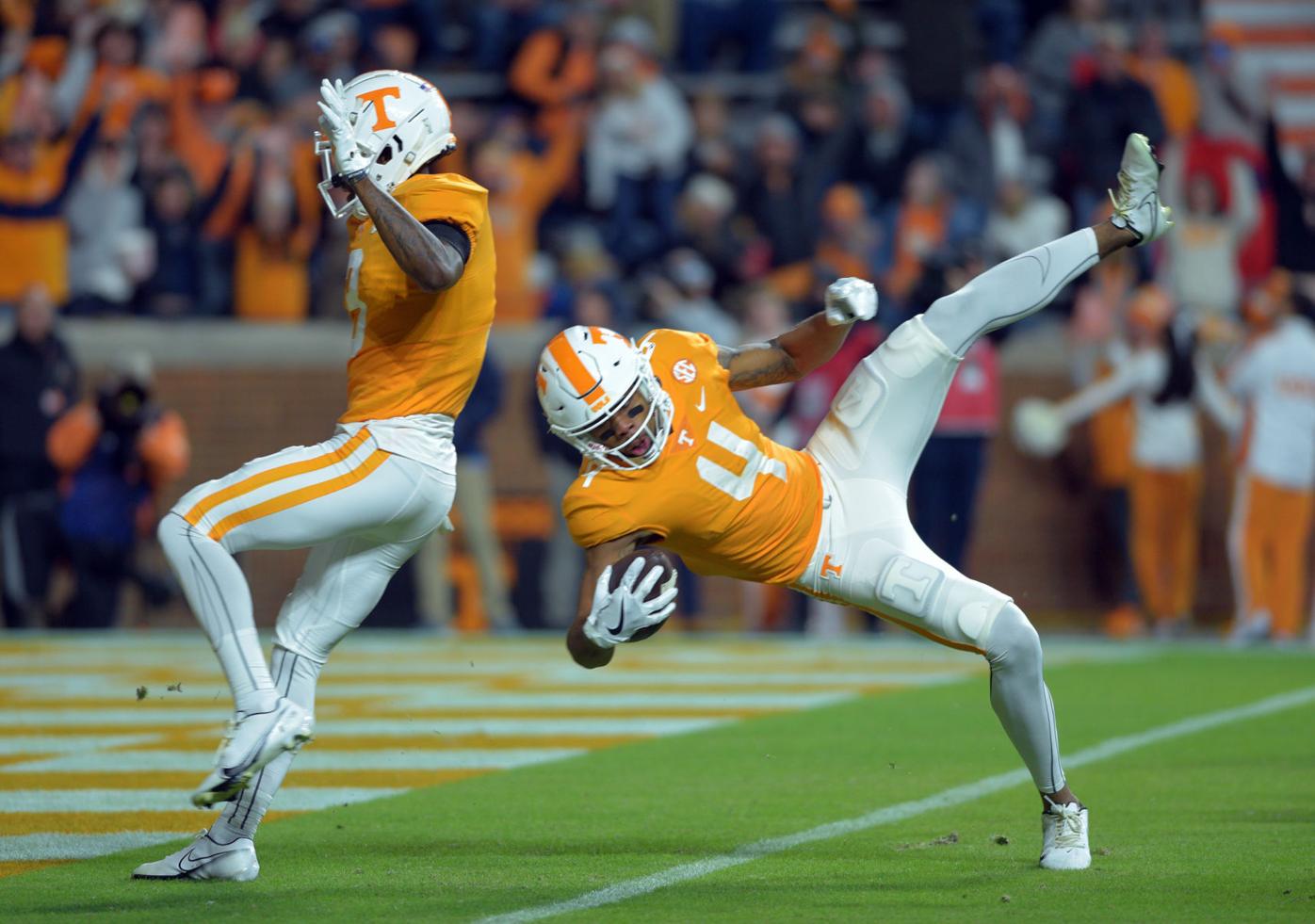 Cedric Tillman (4) dives into the end zone after spinning away from South Alabama defenders in Saturday's 60-14 win at Neyland Stadium. 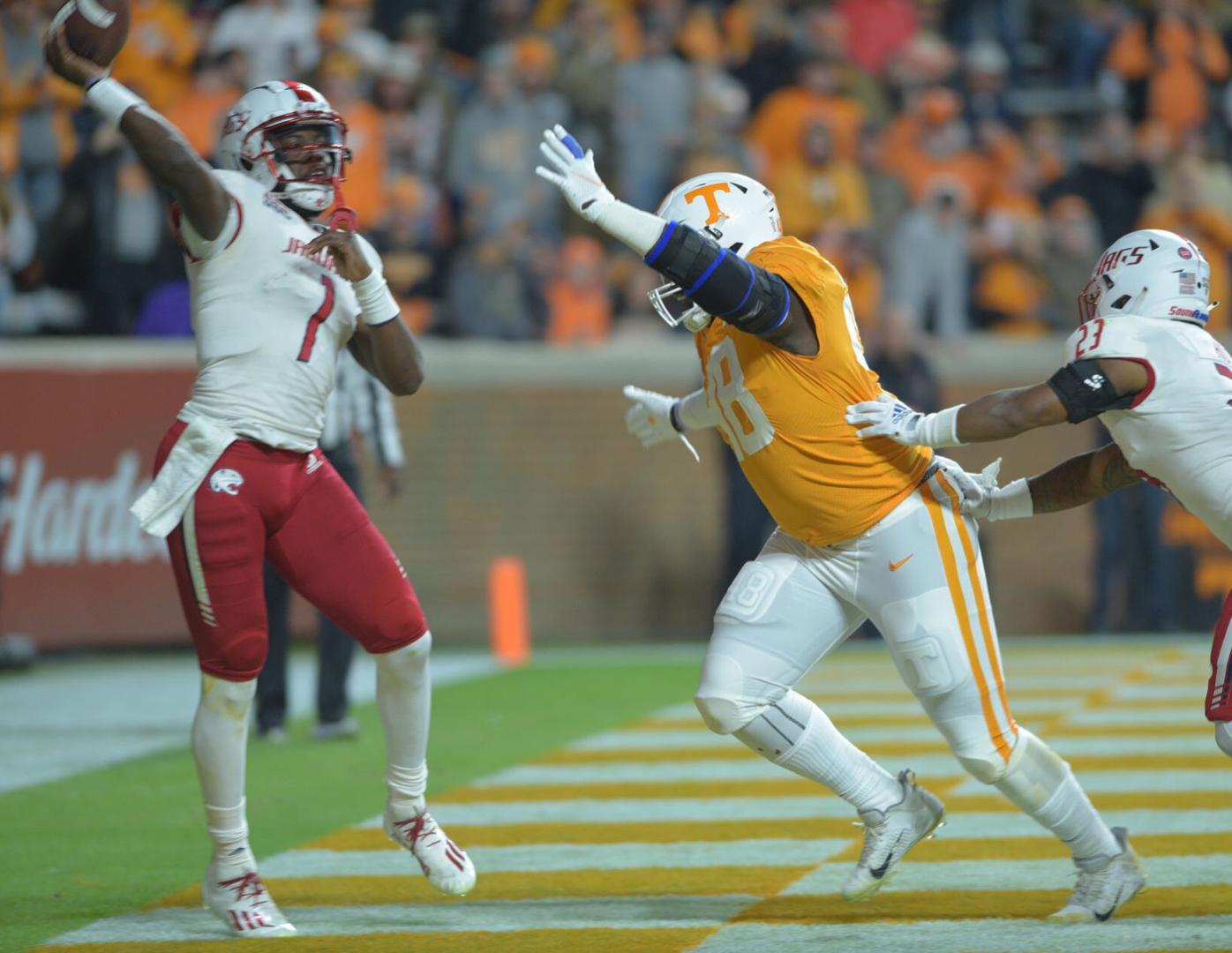 Jacob Warren (87) pulls in a pass from Hendon Hooker in Saturday's 60-14 win at Neyland Stadium.

Cedric Tillman (4) dives into the end zone after spinning away from South Alabama defenders in Saturday's 60-14 win at Neyland Stadium.

KNOXVILLE — Tennessee is finding new ways to score, and so is Velus Jones Jr.

The senior wide receiver has been a key weapon in the Vols’ arsenal through 11 games but he displayed just how much of a threat he is every time he touches the ball in Saturday’s 60-14 rout of South Alabama at Neyland Stadium.

On a night where Tennessee (6-5, 4-3 SEC) scored on the ground, through the air, on special teams and on two late safeties, Jones highlighted the explosive performance by catching all six passes thrown at him for 103 yards and in the return game, where he racked up 143 total yards and a touchdown.

His 96-yard kickoff return with a minute and 18 seconds left in the second quarter showcased every bit of Jones’ speed and agility as he weaved through the Jaguars coverage team and into the end zone to up the Vols’ commanding lead to 42-7.

Jones always seemed a step or broken tackle away from breaking off a touchdown run on kick returns in previous games going back to last season. It’s an ability he has had since playing at Saraland High School in Alabama and for the two years he was at Southern Cal.

“I’ve always had a vision for (being a kick returner),” Jones said. “Of course like in high school I would return punts and kickoff returns. I had a kickoff called to the house in high school as well, had one at USC and had one tonight. I would say vision and also physicality, being able to work through arm tackles and I’m blessed with speed.”

Tennessee coach Josh Heupel knew it was a matter of time before Jones would break loose, in part because of the physical attributes that allow him to make defenders miss or run through tackles, but also because of his awareness with the ball in his hands.

“(Jones is) dynamic as a returner,” Heupel said. “He has a great understanding and feels all of the traffic ... I don’t know how he developed it. It’s God-given, but he has a sense and a feel for it and there’s a lot noise that’s happening right in front of him …

“His strength, his frame allows him to be physical and have the ability to run through some things, which great returners that I’ve been around and played with all have that.”

Those same skills are apparent when Jones is running routes and catching passes too.

When Heupel arrived ahead of spring camp, he had Jones adjust to a different role, one he wasn’t accustomed to playing, but as the year has gone on, he’s proven to be a reliable downfield target.

His 41-yard catch on third-and-long early in the third quarter that set the Vols up at the South Alabama 6-yard line and led to a Hooker rushing touchdown two plays later was just one example of that.

“Just his growth,” Heupel said. “You know, he missed a lot of time in training camp, played outside (receiver), had a really good spring. I think his natural position was inside but I think as the season has gone on he’s kind of found a home there and has gotten really comfortable and has a great understanding. Him and Hendon (Hooker) are on the same page.”

TFL resurgence: The Tennessee defense went into the Kentucky game three weeks ago as one of the nation’s leaders in producing tackles-for-loss.

To that point, the Vols had accounted for 59 TFLs, but the unit struggled against the Wildcats and then last week in a loss against No. 1 Georgia.

Against the Jaguars, Tennessee made up for it with 13 TFLs, which headlined a dominant defensive showing that also included holding South Alabama (5-6, 1-5 Sun Belt) to 1-of-16 third-down conversions and 94 total yards rushing.

“Our third down defense, I thought our guys did a really good job on matching some things out and some of our man-coverages,” Heupel said. “You know, we communicated and got pressure on the quarterback. That was a big part of the football game for us ... I thought we played on edges and some of our pressures were able to get home. With our front four, I thought we changed the line of scrimmage tonight.”

Defensive lineman Matthew Butler was among those that made a difference up front.

The senior, who came up with six tackles and a TFL against the Jaguars, was disappointed after the Vols were gashed for more than 270 yards by Georgia’s rushing attack last Saturday but made up for it in a big way.

“Obviously we want to fix some things, just thinking back to the game and watching it again,” Butler said. “We’re happy to take steps in the right direction and to make negative plays on (South Alabama’s) side of the line of scrimmage.”

Going bowling: It wasn’t Tennessee’s main focus going into Saturday, but beating South Alabama locked up a bowl bid for the program.

With six wins, the Vols will play in a postseason game for just the third time since 2016 after withdrawing from the Liberty Bowl in 2020 because of COVID-19. Considering the perception of the program when Heupel replaced Jeremy Pruitt last January, having the chance at a possible eight-win season is just another accomplishment for a team that has exceeded expectations.

“(Being bowl eligible) definitely means a lot,” Butler said. “We went from having, before this game, two more guarantees and now, including the game we just played, three more guarantees, so it means a lot being able to have that extra month and that extra game with our brothers. Obviously we want to finish strong next week.”

Tennessee hosts Vanderbilt (2-9, 0-7 SEC) for its regular season finale next Saturday at Neyland Stadium. The Commodores are coming off of a 31-17 loss to No. 10 Ole Miss.