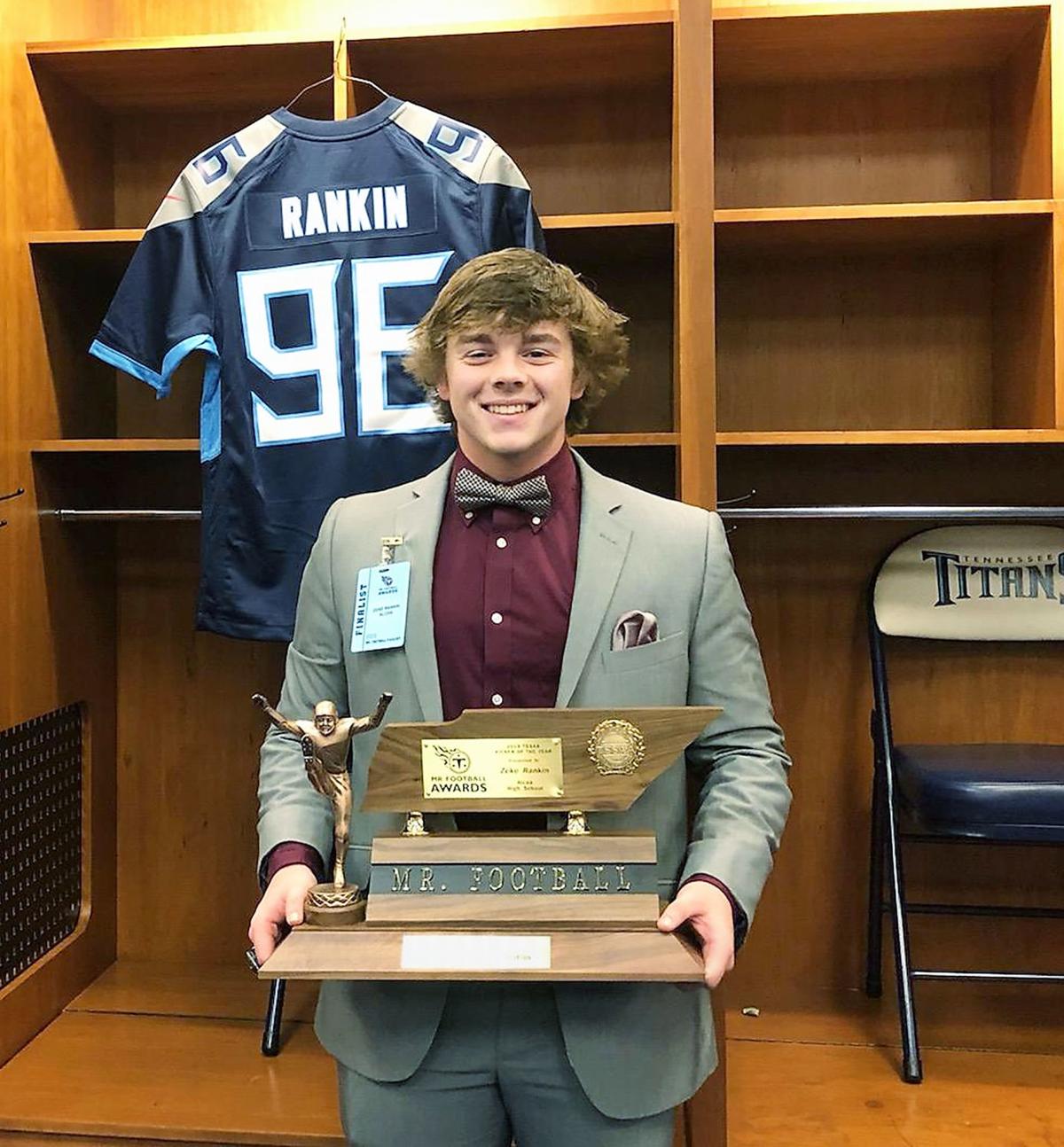 Alcoa’s Zeke Rankin holds his Mr. Football trophy. He was named 2019 Kicker of the Year. 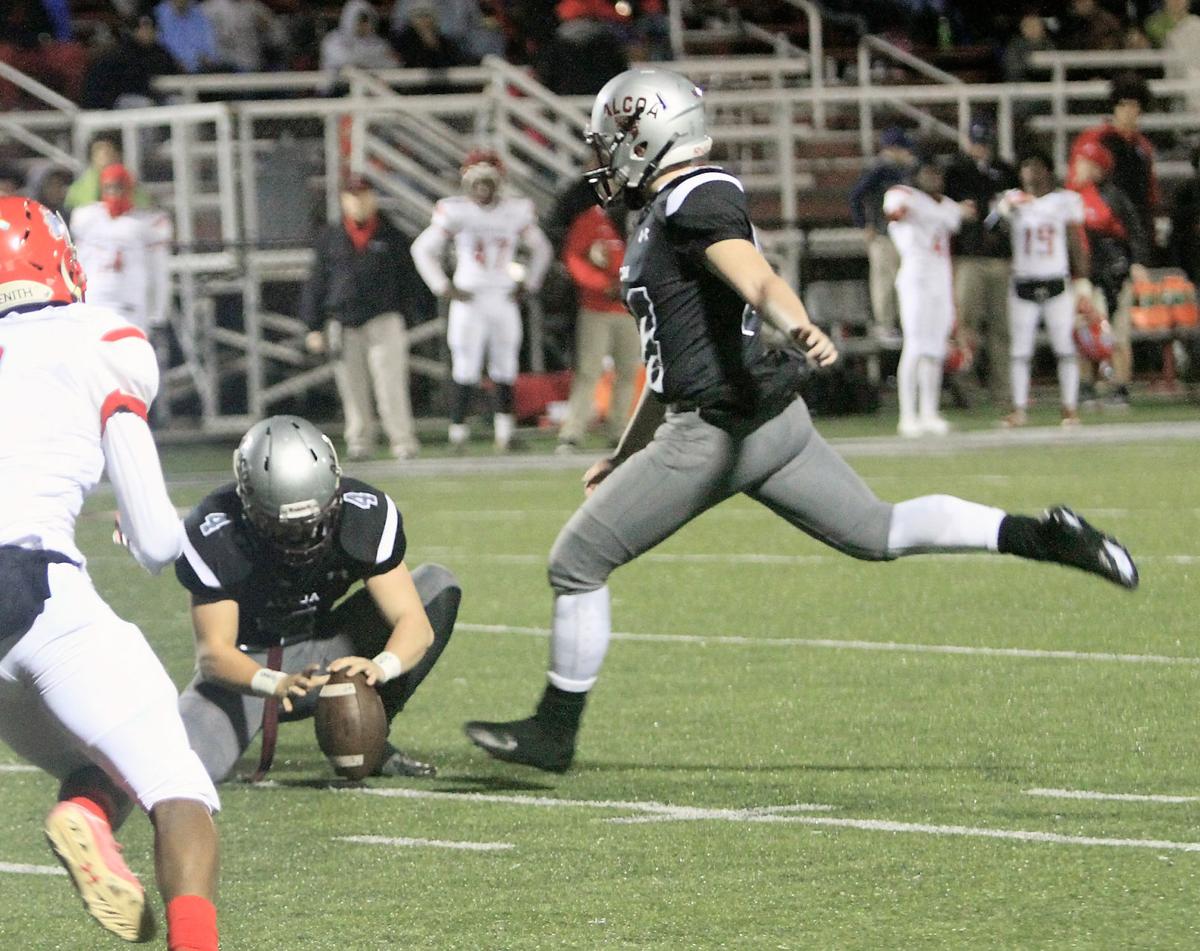 Alcoa’s Zeke Rankin boots through a 25-yard field goal against Austin-East from the hold of Cameron Woody (4) on Nov. 17 at Alcoa.

Alcoa’s Zeke Rankin holds his Mr. Football trophy. He was named 2019 Kicker of the Year.

Alcoa’s Zeke Rankin boots through a 25-yard field goal against Austin-East from the hold of Cameron Woody (4) on Nov. 17 at Alcoa.

NASHVILLE — Alcoa coach Gary Rankin doesn’t interfere much in the kicking game, but a missed field goal or extra-point attempt gets his attention.

His son, senior kicker Zeke Rankin, can attest to that.

“I don’t know if it’s worse on the sideline or the following week at practice,” Zeke Rankin told The Daily Times. “It doesn’t even have to be a miss, it can be a bad-looking extra point, and that week at practice if I swing wrong or (assistant coach) Carlos (Lopez) says something about me doing something different, there it goes. All the coaches start piling in.”

He made four of his seven field goal attempts and 83 of his 84 extra-point attempts this while averaging 35 yards per punt to win 2019 Tennessee Titans Kicker of the Year on Monday in Nissan Stadium.

Kicking is a pressure-packed position in and of itself, but being the son of the winningest coach in Tennessee history takes it to another level.

“It’s one of those situations where I know if I get thrown out there in a game-winning situation or I ever shank something bad, people are going to say I’m only out there because I’m his son and there has to be somebody out there who is better,” Zeke Rankin said. “There is definitely a little bit of pressure that comes with it, but there is also a spotlight on me.

Zeke Rankin has made the most of that spotlight, thanks in part to Lopez, who he said “has probably been the best thing that has happened in my high school career.”

The duo has worked together since Zeke Rankin was in the seventh grade, developing the most reliable kicker Alcoa has had in recent memory.

“We always talk about how he has to walk in a big shadow,” Lopez said. “That last name speaks pretty loud, but ever since we started working I’ve told him that the mindset of a kicker is 90% mental and 10% physical.”

Zeke Rankin has both down pat, blocking out all the noise associated with being a kicker while putting in a lot of work in the weight room.

His longest made field goal this season is 37 yards — a byproduct of the Tornadoes’ dominance — but he is more than capable of kicking from deeper distance.

“Most people say that kickers don’t practice or workout, but you can ask some of my teammates, I’m probably one of the strongest kids pound-for-pound on the team,” Zeke Rankin said. “I’ve always been pushed, especially with my brother being a strength coach. Having those two who are both hard workers that keep me pushing.”

It has all culminated in Zeke Rankin avoiding the ire of his father as often as possible and prepared him for the biggest stage of them all — a meeting with Pearl-Cohn in the Class 3A BlueCross Bowl at 3 p.m. CT Friday inside Tennessee Tech’s Tucker Stadium.

“It’s easy for anybody to feel like it’s handed to him because of his dad being the head coach, but he has actually put in the work and he’s gotten those numbers himself,” Lopez said. “His last name is Rankin, but that doesn’t move the leg.

“Zeke is the one who has to move the leg, and I think he has handled it all very well.”