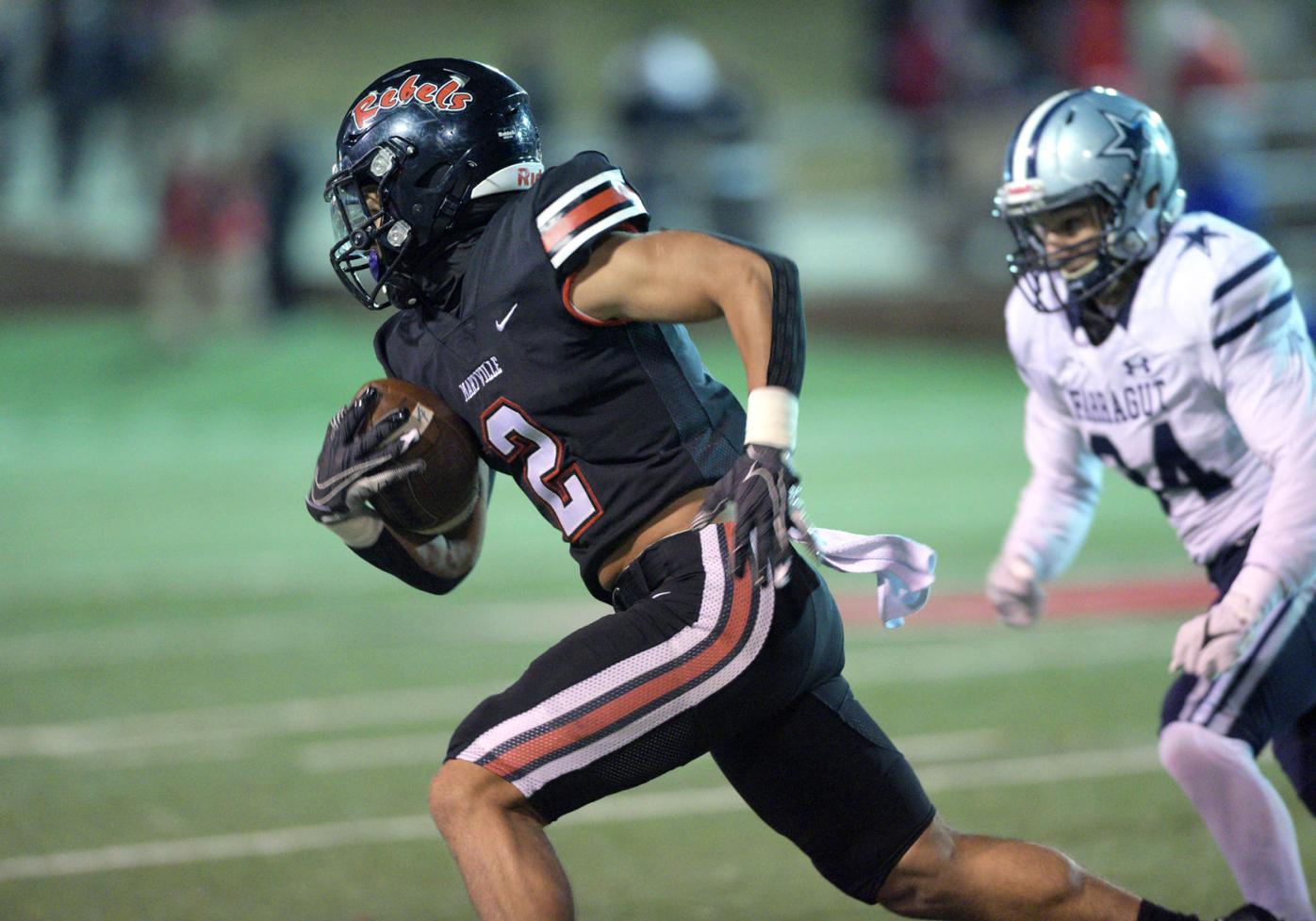 Noah Vaughn (2) sprints to the corner for the Rebels Friday night in their 28-21 quarterfinal game against Farragut. 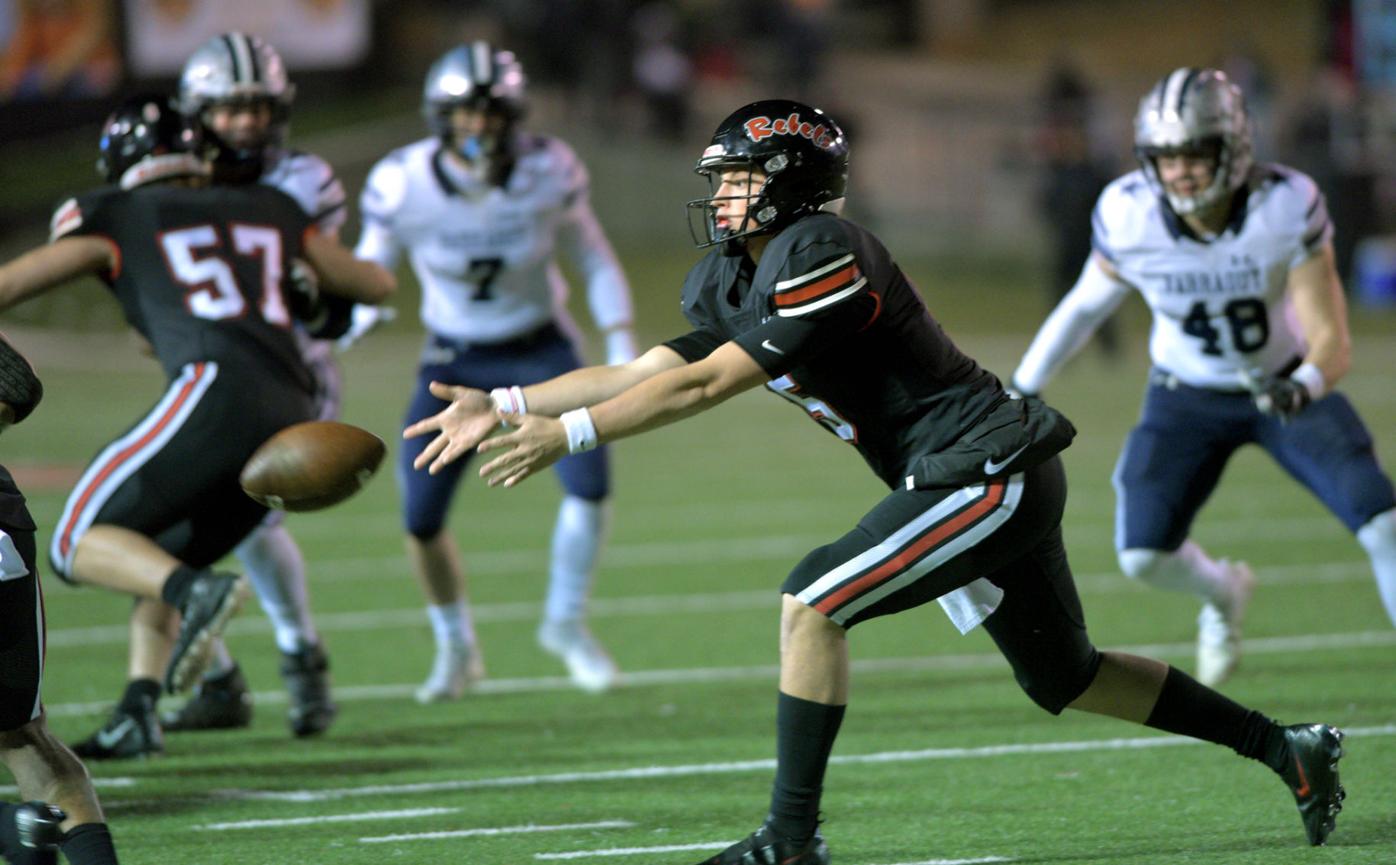 Rebel quarterback Carson Jones (5) shovels the ball to Noah Vaughn on a sweep to the left in the Rebels’ 28-21 quarterfinal win Friday night at Maryville. 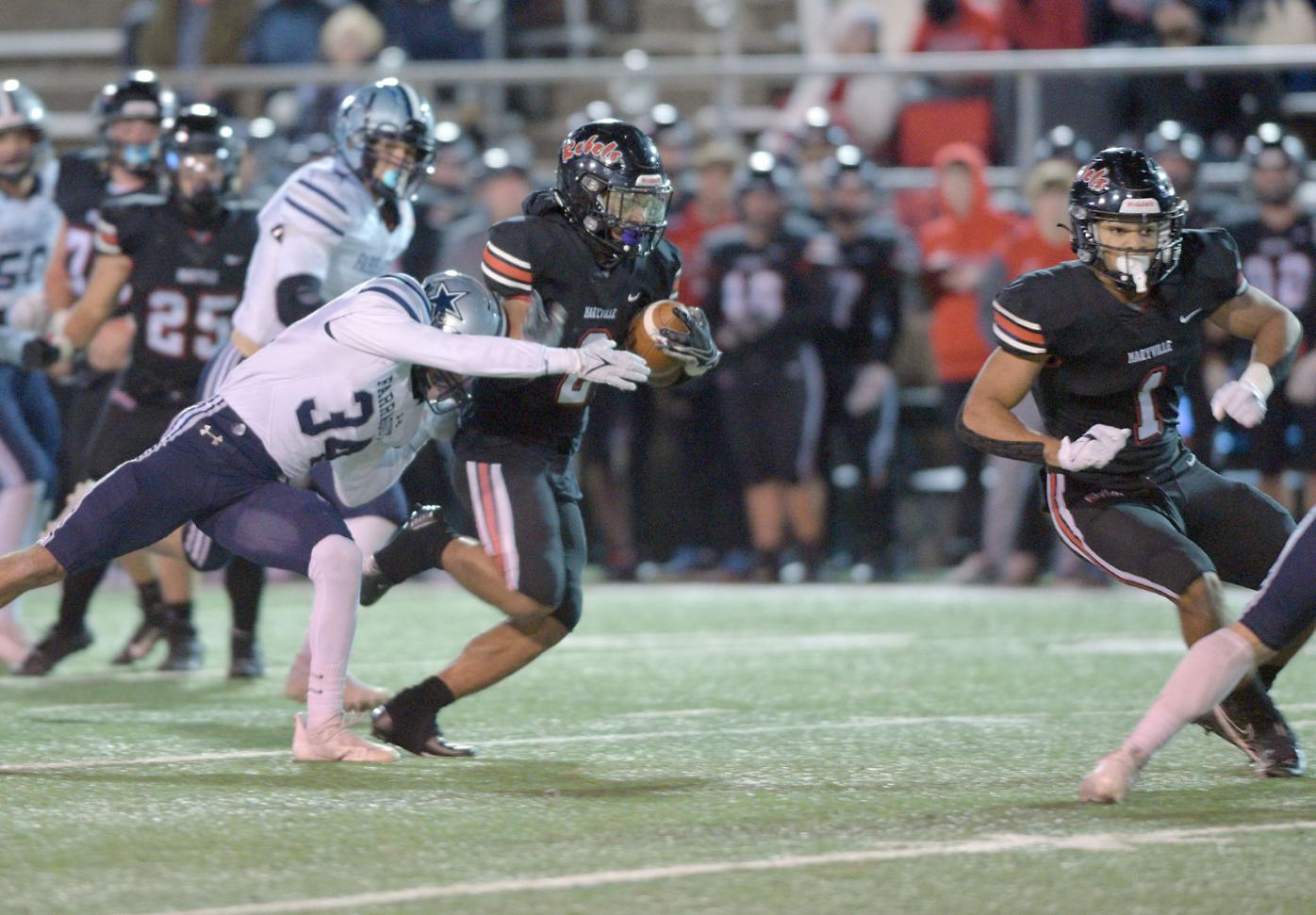 Maryville’s Noah Vaughn (2) pulls away from Farragut’s Jerome Brekken (34) and follows the block by D.J. Burks (1) as the Rebels mount a drive during Friday’s 28-21 Class 6A quarterfinal win over Farragut at Shields Stadium. 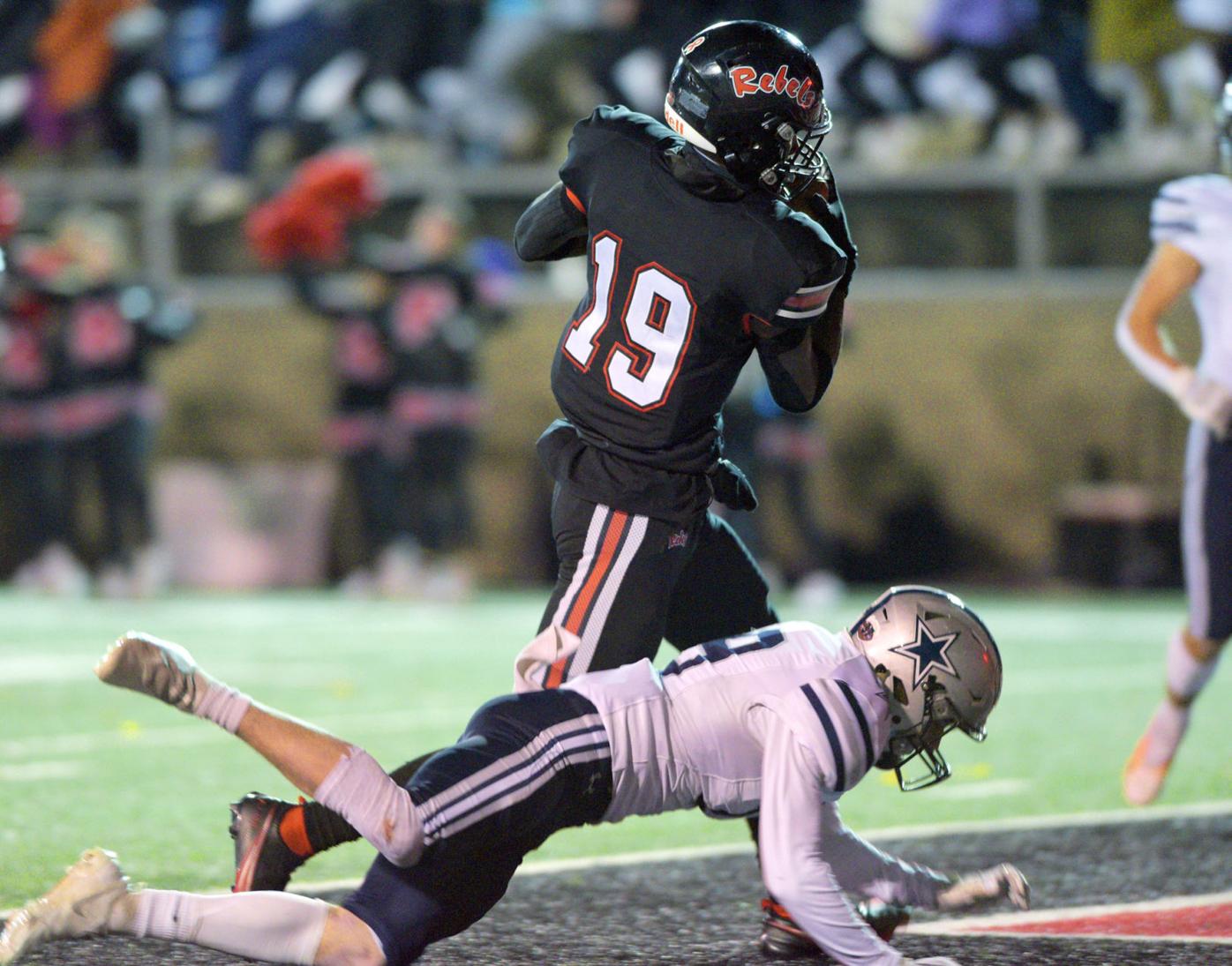 Maryville’s Markel Fortenberry (19) catches a slant for a Rebel touchdown as Farragut’s Simeon Sharp (19) slips on the turn Friday in the Class 6A quarterfinlas at Shields Stadium.

Noah Vaughn (2) sprints to the corner for the Rebels Friday night in their 28-21 quarterfinal game against Farragut.

Rebel quarterback Carson Jones (5) shovels the ball to Noah Vaughn on a sweep to the left in the Rebels’ 28-21 quarterfinal win Friday night at Maryville.

Maryville’s Noah Vaughn (2) pulls away from Farragut’s Jerome Brekken (34) and follows the block by D.J. Burks (1) as the Rebels mount a drive during Friday’s 28-21 Class 6A quarterfinal win over Farragut at Shields Stadium.

Maryville’s Markel Fortenberry (19) catches a slant for a Rebel touchdown as Farragut’s Simeon Sharp (19) slips on the turn Friday in the Class 6A quarterfinlas at Shields Stadium.

Maryville never thought about playing it safe with Farragut.

Junior running back Noah Vaughn scampered for nine yards on second-and-12 to put the Rebels in prime position to pick up a first down and escape a nail-biter in the Class 6A quarterfinals, but personal foul after the play made it third-and-17 on their own 43-yard line.

Maryville could have run the ball, forced Farragut to call its final timeout and punt to make the Admirals drive the length of the field with two minutes remaining. Instead, the Rebels turned their Mr. Football semifinalist Carson Jones loose. The coaching staff rolled the dice on fourth down handing it off to Vaughn, who picked up more than enough to seal a 28-21 win Friday inside Shields Stadium.

“We have a lot of faith in those guys, and we had been executing the whole game, so there was no reason to not have trust in them,” Maryville coach Derek Hunt told The Daily Times.

Jones faked a handoff to Vaughn before dropping back and delivering a strike to senior wide receiver DJ Burks, who corralled the pass with a Farragut defender on his back.

“This week, we talked about the safety not being there on that play because of course he is going to run with Markel, so I’d probably be open,” Burks said. “Before the game, I already knew that if we called that play it was coming my way. When he called it during that timeout, I knew I had to get to my spot and that it would be a hard catch. I just came through.”

Burks popped up and signaled for a first down, but the officials ruled him a yard short. Maryville never hesitated with its fourth-down decision. Vaughn burst through the hole for 11 yards to a cap a 20-carry, 185-yard performance.

“I’m honored that when the game was on the line and we’re in that situation that the coaches wanted to put the ball in my hands,” Vaughn said. “I’m happy that they have the trust in me to handle the ball and get that one yard that we needed.”

Maryville (13-0) needed to gamble because of Farragut’s own aggressiveness — a trademark of the Admirals’ late-season run that featured a win over Bearden in Week 11 to reach the playoff bracket as a four-seed and then upset victories over Region 1 champion Science Hill and then a Bradley Central squad that defeated Farragut in the regular season.

The Admirals executed their game plan to perfection, possessing the ball for 30 minutes compared to the Rebels’ 18. Farragut (6-7) converted six of its 14 third-down attempts and went 3-of-5 on fourth down, one of which resulted in a touchdown when Farragut quarterback Dawson Moore found Landis Davila from nine yards out in the fourth quarter.

“Our back was to the wall and we had to fight to get into the playoffs,” Farragut coach Eddie Courtney said. “We got off to a slow start, but these guys never quit. It’s just about the character of these guys, how hard they played and how much they love each other.”

Farragut attempted an onside kick after Davila’s touchdown, but a false start on the kick forced them to re-kick. The Admirals squibbed the ensuing kick and Vaughn scooped it and returned it 52 yards, one defender away from taking it to the house. Three plays later, he did find pay dirt on a 19-yard scamper.

Farragut responded with a 12-play, 80-yard scoring drive capped by a 2-yard run by Elijah Gibbs, but it strayed from the aggressiveness that got it to quarterfinals and kicked it deep instead of going for an onside attempt.

The Rebels never gave the Admirals the ball back, making the plays necessary to seal the victory and set up their eighth consecutive semifinal meeting with Oakland.

“When you play a team in the playoffs that is coming in with a lot of confidence, that’s a scary deal,” Hunt said. “When you get to quarterfinals, it’s all about survive and advance. I’m really proud of our kids because it’s not like we gave them anything. Farragut had to earn everything they got, and they did.

“A lesser team could have let all the energy be sucked out of us and fold, but they were gritty.”

Maryville advances to the state semifinals for the 21st straight season where the Rebels will host Oakland on Black Friday. Summitt will visit Hendersonville on the other side of the bracket with the winners meeting in Chattanooga on Saturday, Dec. 4.