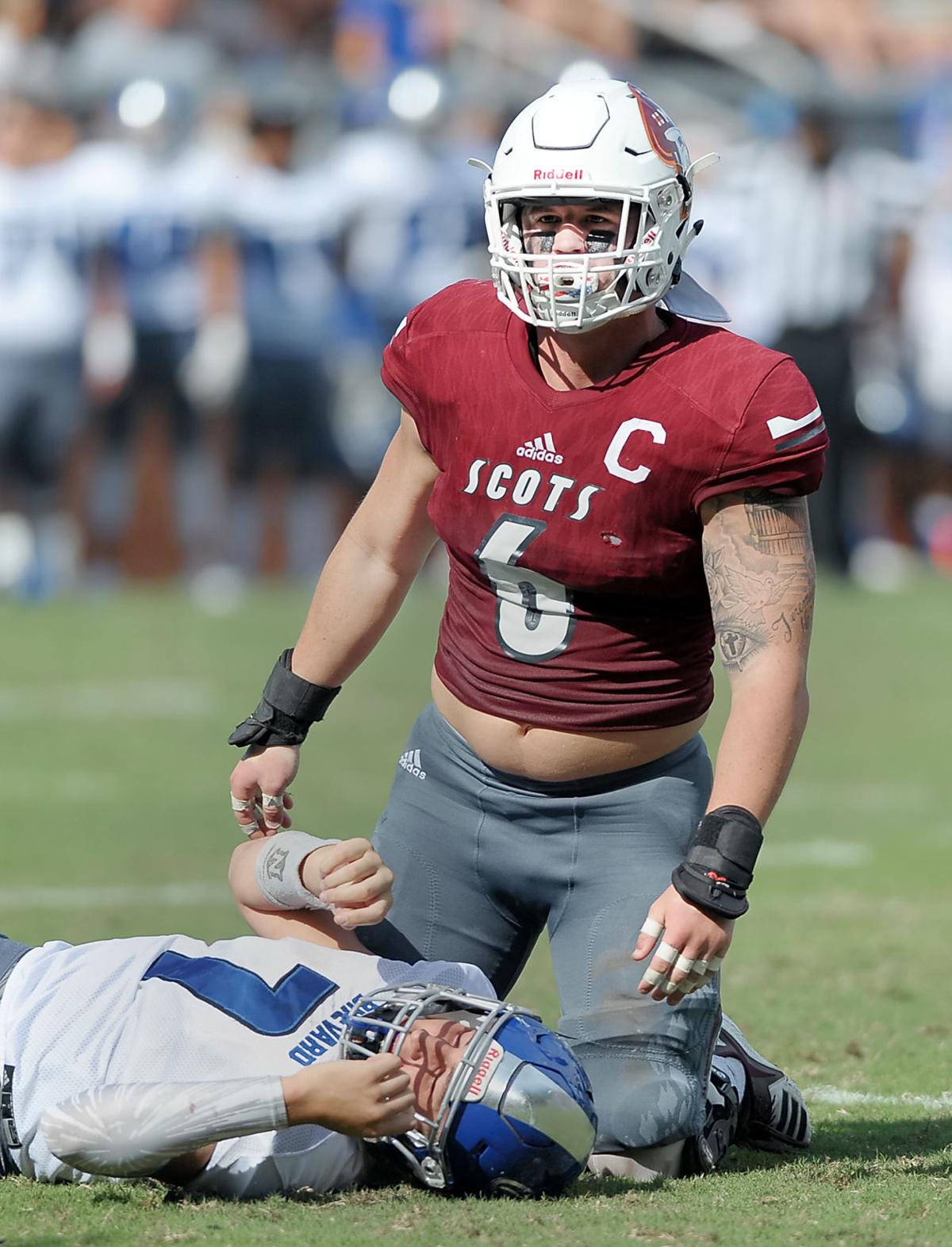 Trenton Cumby (6) rises above Brevard’s Dalton Cole (7) after a sack in the Scots’ game against Brevard on September 29, 2018. 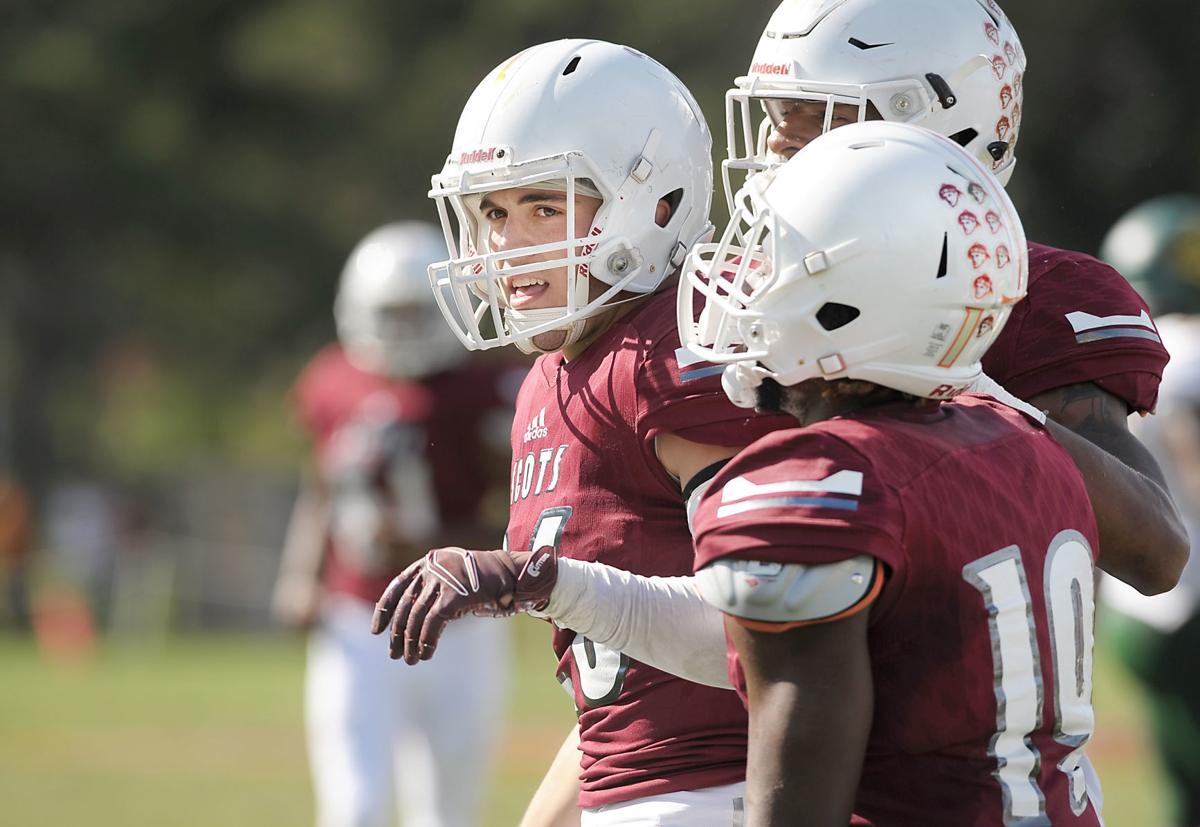 Maryville College’s Denaus Ferguson and Jamal Ware congratulate Blake Henderson (26) after his diving interception in the first half of the Scots’ win over Methodist on Oct. 21, 2017. 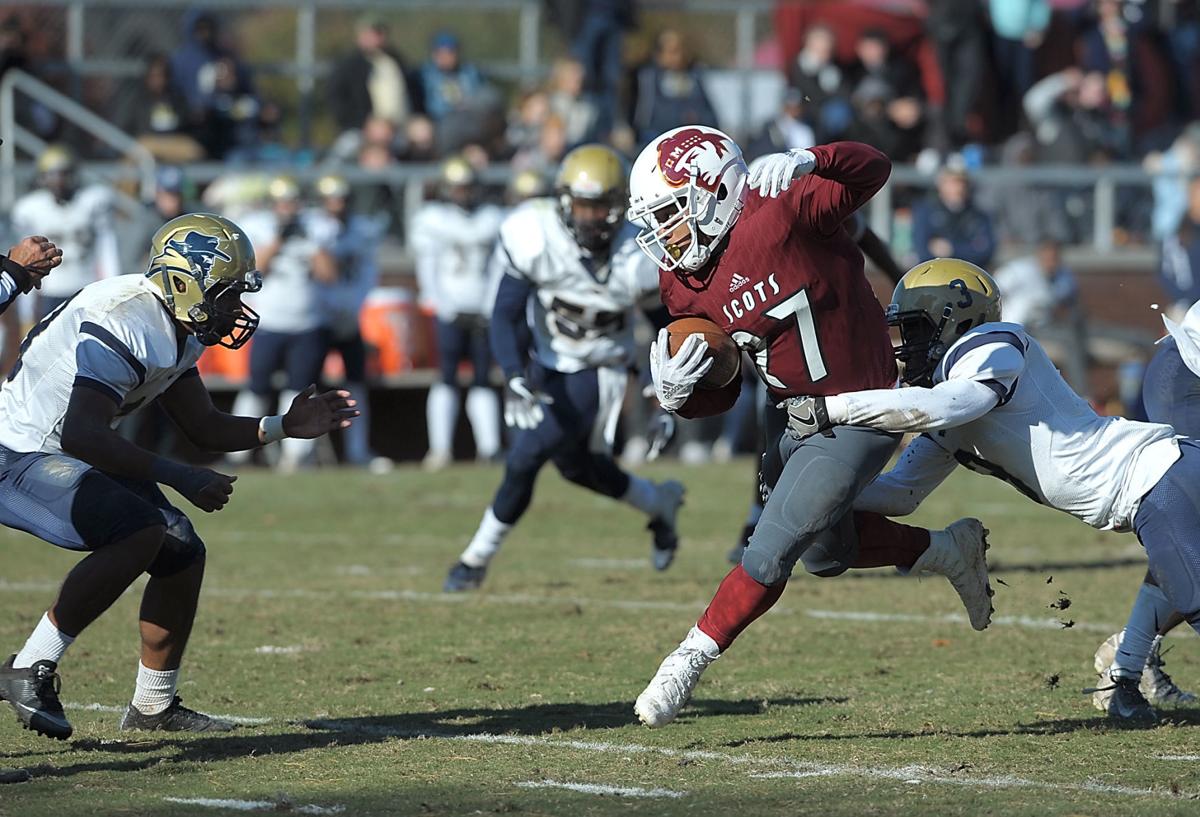 Trenton Cumby (6) rises above Brevard’s Dalton Cole (7) after a sack in the Scots’ game against Brevard on September 29, 2018.

Maryville College’s Denaus Ferguson and Jamal Ware congratulate Blake Henderson (26) after his diving interception in the first half of the Scots’ win over Methodist on Oct. 21, 2017.

Elijah Rachell starred at Decatur (Ga.) High School and drew interest from Division-I football programs before a torn meniscus in the middle of his senior season rerouted his collegiate career to Maryville College.

Four years later, he was the first player to celebrate with Maryville College coach Shaun Hayes on the sideline after a victory over North Carolina Wesleyan that sealed the program’s first outright USA South Athletic Conference championship in his final game on Honaker Field, extending his playing career into the NCAA Division III Football Championship.

It did not last much longer.

The Scots suffered a first-round loss to Berry a week later, and a new chapter began quicker than Rachell was ready for.

“I’ve dedicated my entire life to playing football,” Rachell told The Daily Times. “Those are memories you’ll have forever — those away games, those road trips and being able to play in front of your family and friends — but all of a sudden you don’t have any of that anymore.”

Rachell traded in his helmet and shoulder pads for budgets and financial records as a property accountant for LHP Capital in Knoxville, but he also coaches running backs at his alma mater, which allows him to stay connected to the sport that has occupied most of his life.

The same cannot be said for a lot of his teammates, who had to adjust to a new way of life.

Former Maryville High School and Maryville College safety Blake Henderson is still in school working toward his doctorate from the University of Tennessee Health Science Center’s College of Pharmacy.

A class schedule and workload without practices and film sessions intertwined took some acclimation, but traits instilled in most athletes — work ethic, time management and self-discipline — made the transition easier.

“It’s kind of like the offseason, but even in the offseason you had mandatory workouts and meetings,” Henderson said. “Grad school is a different beast in itself in that it kicks it up a notch and keeps me busy, but it all relies on how you manage your time because you don’t have anybody telling you have to be here or you have to do this.”

Former Maryville College defensive lineman Trenton Cumby was a part of the Class of 2014 signing class with Rachell and Henderson, but he competed as a fifth-year senior last season for the Scots.

The Cookeville native only had to take one class to meet NCAA requirements, which allowed him to be “phased into the workforce” as he wrapped up his career.

The routine-oriented nature of football is different than Cumby’s current line of work as an environmental specialist for the Sevier County Health Department, and that contrast served as the biggest adjustment he had to encounter.

“As a student-athlete, we’re on such strict routines — work out, eat, class, practice, etc.,” Cumby said, “But when you wake up and go to work, the job itself changes depending on the day.”

The jam-packed schedule student-athletes creates a unique set of pros and cons when it comes to transitioning to life after college.

A season may last for a few months, but preparation for the upcoming year starts shortly after the previous one ends, lessening the opportunity to accumulate as much work experience as their fellow classmates do.

However, student-athletes benefit from the vast network of former alumni that spans countless places and professions.

Rachell met a former Maryville College player on the elevator when he was seeking his first accounting job at The Discovery Channel in Knoxville, and the man ended up putting in a good word for him.

“That was my elevator pitch opportunity,” Rachell said. “… With (the community) being so small, people are always willing to stick out their hand and help people. One thing I hope I can do as I grow older through my career is give back the same way it gave back to me.”

Most student-athletes do not know anything beyond a life that revolves around their athletic careers, which can make for a difficult transition when it all comes to an end, but the best programs prepare their players for more than what occurs on the field.

“I’ve always been taught from Maryville High School up to Maryville College that life is more than just football,” Henderson said. “A lot of the lessons I’ve learned from football have carried over to what I’m doing now.”