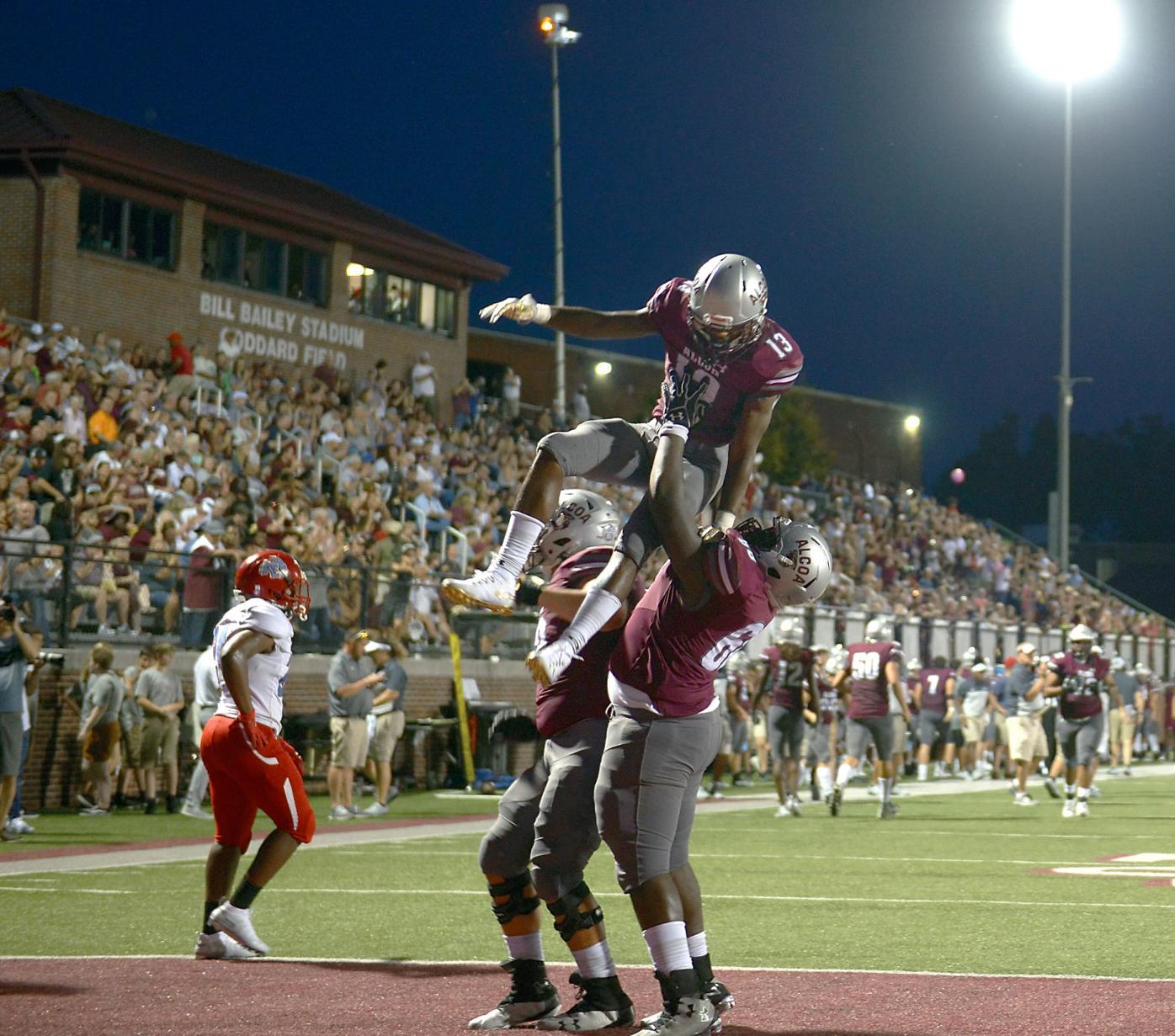 Alcoa’s Ronald Jackson (13) gets a boost from his lineman in the end zone Aug. 30 after scoring the Tornadoes’ fourth touchdown in the first half against Austin-East in the Region 2-3A game at Goddard Field in Alcoa. 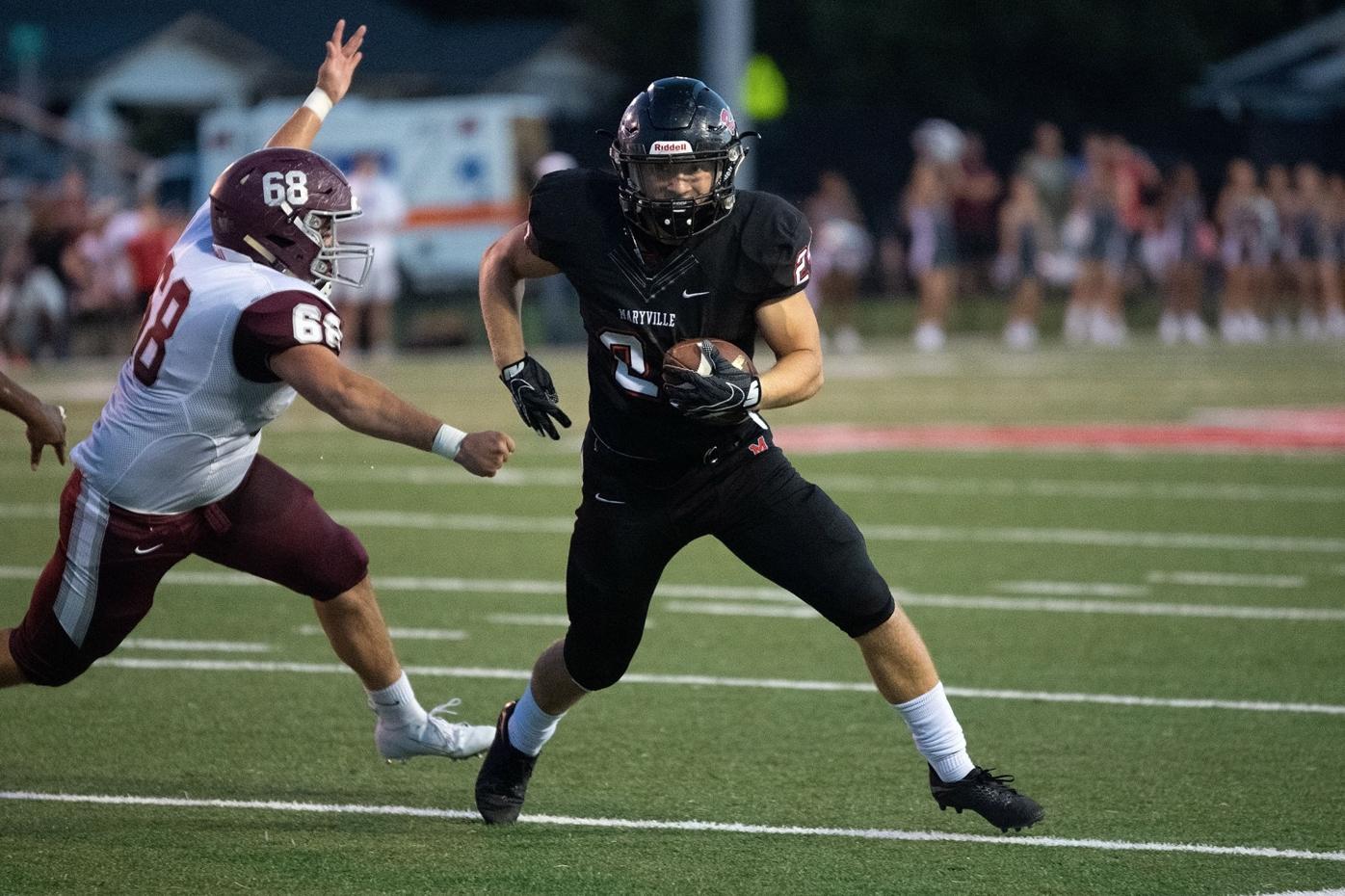 Maryville running back Parker McGill runs in the open field against Bearden on Aug. 30, 2019.

Alcoa’s Ronald Jackson (13) gets a boost from his lineman in the end zone Aug. 30 after scoring the Tornadoes’ fourth touchdown in the first half against Austin-East in the Region 2-3A game at Goddard Field in Alcoa.

Maryville running back Parker McGill runs in the open field against Bearden on Aug. 30, 2019.

Maryville has four less state championships than it does losses since the turn of the century — two decades of dominance that have created a veil of invulnerability.

However, the allure of Maryville will take a night off today as it plays the role of underdog when it faces county rival Alcoa (TV: WVLT, 7 p.m.) at Goddard Field in the 91st edition of the Battle of Pistol Creek.

“Our kids go into every game expecting to win, and that’s what is special about our kids — and I think Alcoa is the same way,” Maryville coach Derek Hunt told The Daily Times. “I’m sure Vegas would have them as the favorites, but once it’s kicked off, none of that stuff means anything.”

The Rebels (3-0) own a 64-23-3 record in the best rivalry in Tennessee high school football, but the Tornadoes (3-0) enter as the second-best team in the state behind Oakland and No. 78 in the country, according to High School Football America.

Alcoa also boasts a victory in the latest meeting between the two historic programs — a 34-28 result last season that marked its first win over its rival since 2010 and ended Maryville’s 70-game home winning streak.

“I’m sure they’re mad about it, but I don’t think (the previous result) has an effect,” Alcoa coach Gary Rankin said. “We certainly don’t play on it. We probably say less about the game to our kids than any other program in the state.”

Tonight’s clash pits a pair of dynamic offenses against two stifling defenses with county supremacy on the line.

The Tornadoes have proven they can hang with a Class 6A offense, allowing 208 yards in a season-opening win to Blackman. They may also get the benefit of not having to contend with senior running back and Tennessee commit Tee Hodge, who is doubtful after suffering a turf toe injury against Cleveland on Friday.

“Nobody has stopped them yet this fall,” Rankin said. “It’s one of their better offensive teams, and they always do a good job on offense, so if we want a chance to win, we have to find some ways to somehow slow them down.”

“I think this is the most talented Alcoa team I’ve seen on film since I’ve been at Maryville,” Hunt added. “They don’t have any weak spots — not that they’ve had many in the past. They’re big, they’re physical and they have great skill players all over the place.”

Maryville remembers the stunned silence inside its locker room a year ago, a scene it never wants to relive. Alcoa, on the other hand, can recall every moment of its celebration, and it hopes to have another Thursday night.

The outcome of the Battle of Pistol Creek may not have any bearing on the expectation of winning a state championship that hovers over each program, but it means a ton to players, coaches and the thousands of fans who will descend upon Goddard Field and tune in on television.

The thought of hoisting another Gold Ball can be put on the back burner for one night. This game is about bragging rights.

“It’s all you hear about, and that’s what makes it fun,” Hunt said. “It’s a special game because the people really care about it in both communities, and you want it that way.

“I don’t even think people in Maryville and Alcoa know how fortunate we are to have two great programs that play each other every year. It’s probably taken for granted in our community by some people, and I’m in that group because it’s all I’ve ever known.”

WHO: Maryville at Alcoa

SERIES HISTORY: This is the 91st meeting. Maryville leads the series 64-23-3, but Alcoa won last year.