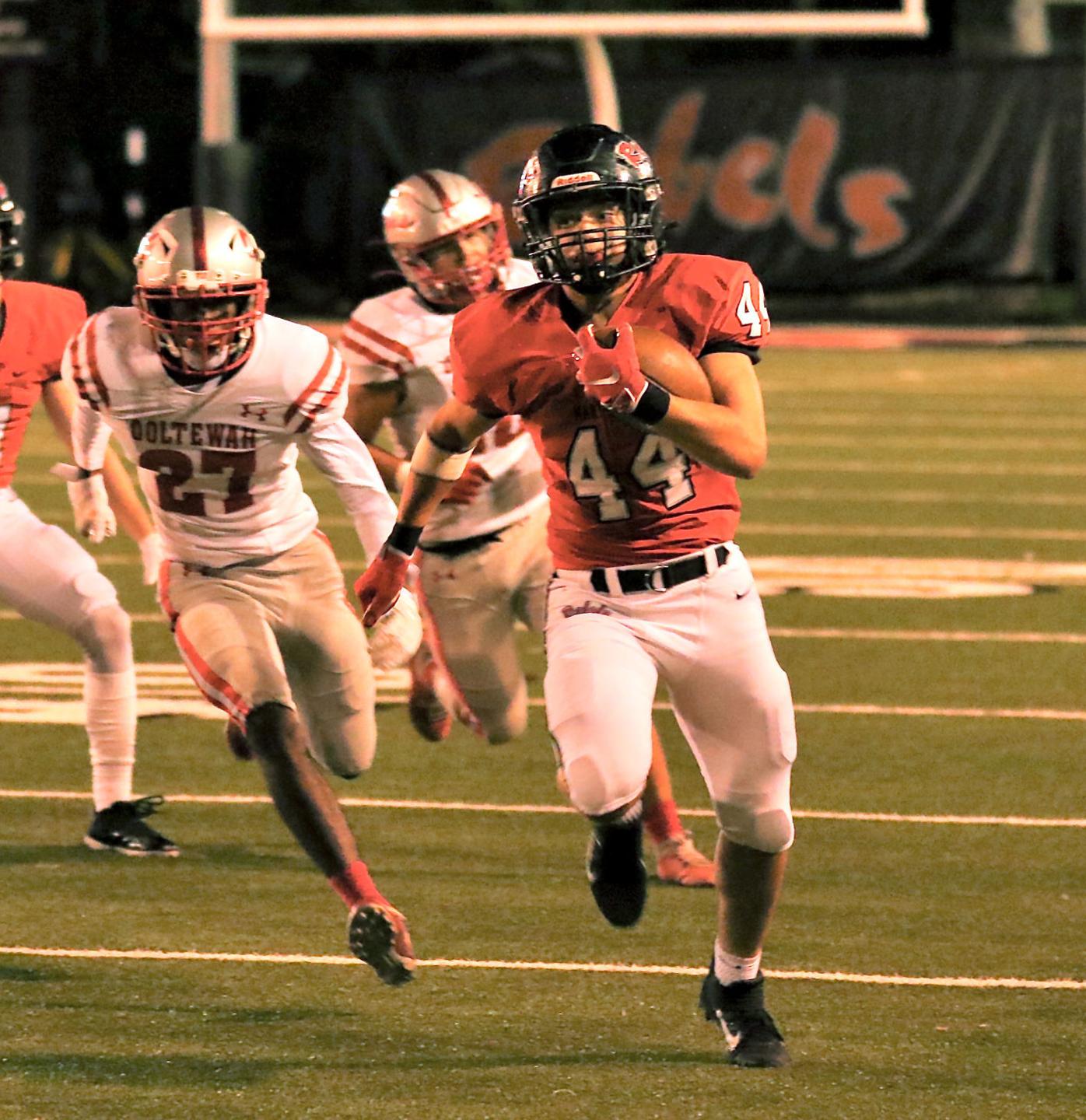 Maryville’ sophomore Peyton Cooper (44) runs 44 yards for a touchdown against Ooltewah on Friday at Shields Stadium in Maryville. 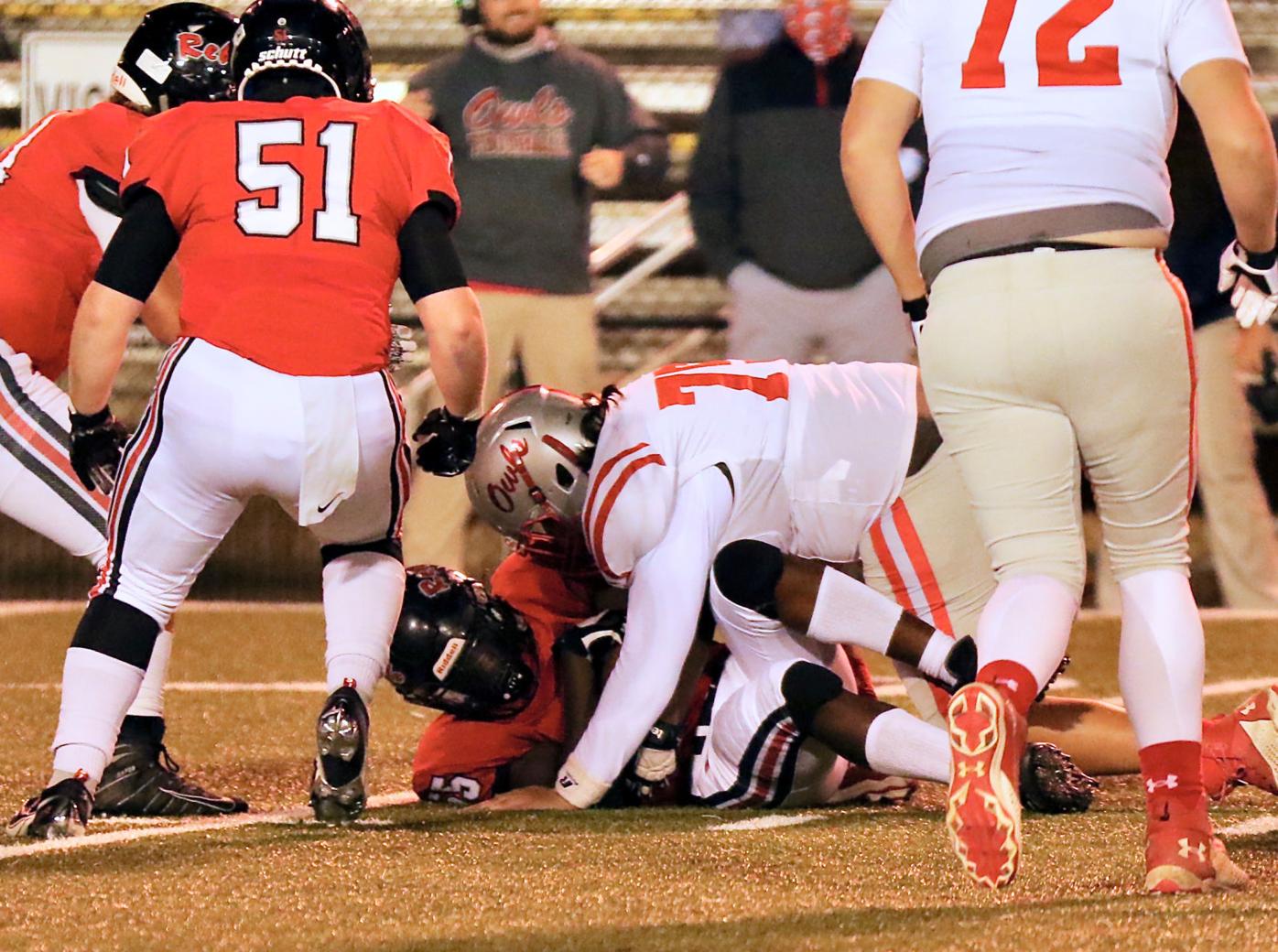 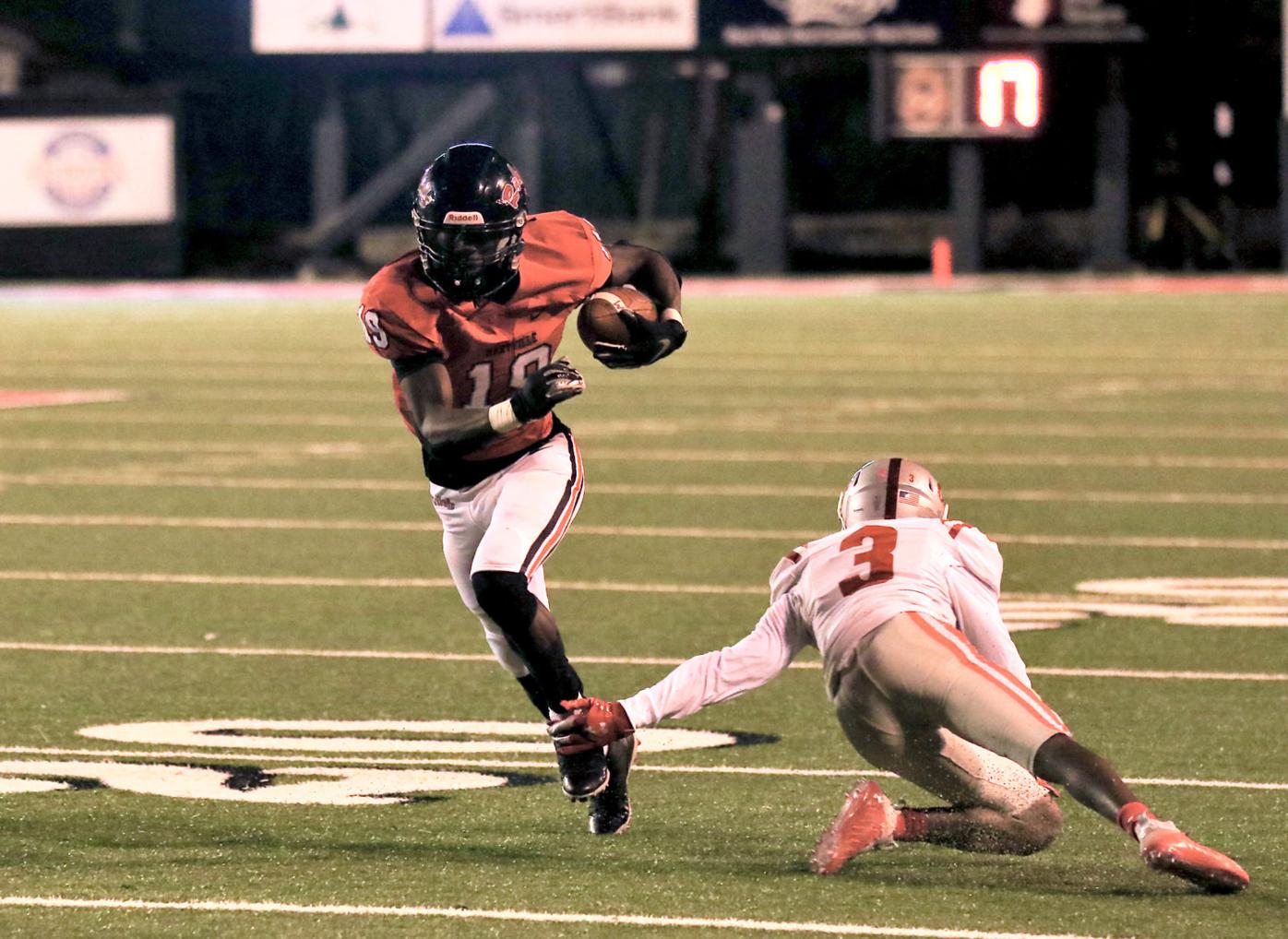 Maryville’s Markel Fortenberry (19) evades an Ooltewah defender after catching a pass from Crason Webb Jones fduring a region win over Ooltewah on Friday at Shields Stadium in Maryville.

Maryville’ sophomore Peyton Cooper (44) runs 44 yards for a touchdown against Ooltewah on Friday at Shields Stadium in Maryville.

Maryville’s Markel Fortenberry (19) evades an Ooltewah defender after catching a pass from Crason Webb Jones fduring a region win over Ooltewah on Friday at Shields Stadium in Maryville.

The Rebels were a model of ball-control on Friday night.

Maryville opened with a dominating long drive that chewed clock and yardage, put up 28 points in the first quarter and were as methodical as a metronome in a 56-12 Region 2-6A victory over visiting Ooltewah at Shields Stadium.

The Rebels (8-0, 4-0 Region 2-6A) took the opening drive 80 yards over 12 plays, methodically driving the ball down the field over a six minutes span before Parker McGill capped off march with a 7-yard touchdown run.

“The opening drive, I thought, set the tempo,” Maryville coach Derek Hunt told The Daily Times. “Just the execution piece is what I was most proud of. We were really balanced as far as run-pass and just executed.”

The Rebels scored 28 points in the first quarter, with a 31-yard DJ Burks pick-six and two Carson Jones touchdown passes, one to Markel Fortenberry and the other to Nick Dagel, rounding out their early offensive performance against the Owls (3-5, 1-3).

Noah Vaughn and Craig Hilliard both powered in touchdown runs in the second quarter. The Rebels’ stout opening drive was nearly matched by their 12-play, 73-yard march that consumed five minutes and 16 seconds and ended with Hilliard’s scoring carry.

Maryville’s only hiccups came at the end of the first half and the start of the second. Ooltewah scored a touchdown in the final moments of the second quarter, then on its initial possession of the third, failing twice on 2-point conversion attempts.

“Had some young guys in,” Hunt said. “We’re trying to play a lot of guys. But I thought Ooltewah made a couple good plays and got in there right before the half. Quarterback made a good throw and the receiver made a great catch.”

The Rebels’ control didn’t falter. Hilliard notched his second touchdown run on an 11-yard carry and Peyton Cooper broke away on a 44-yard scoring run to widen Maryville’s lead in the third. Hilliard, a senior, totaled 25 yards and the two touchdowns on four carries. He averaged 6.3 yards per carry.

“I was just looking through the holes and knew what I was doing,” Hilliard said. “Do what I need to do.”

Jones again proved effective and efficient as the junior quarterback completed 18 of his 19 passes for 211 yards and two scores. Vaughn, Fortenberry and Dagel were his favorite targets, as the trio rang up 13 receptions.

McGill led the Rebels in rushing, recording 45 yards and the score on eight carries. He also caught two passes for 10 yards.

“We have a great offense,” Hilliard said. “Great blocking. Markel (Fortenberry) is amazing. We’ve just got to keep going.”

Maryville also found success in the return game. Fortenberry and McGill returned one kickoff each, with Fortenberry running his back 40 yards and McGill netting 69 yards on his return.

McGill’s return came at a key time for the Rebels; Ooltewah had just scored to open the second half, but the senior’s long return extinguished the Owls’ momentary momentum.

The Rebels offense converted eight of the nine third downs while the defense stopped Ooltewah on six of its eight third-down situations.

Maryville hosts McMinn County in Week 10 in a battle of state-ranked unbeaten 6A squads. McMinn County defeated Cleveland, 42-7, on Friday.

“So big game for us next week.”

The game will be a grudge match between the leaders of a top-heavy region and arguably Maryville’s biggest test yet this season.

“Keep playing hard,” Hilliard said. “That’s what we need to do.”