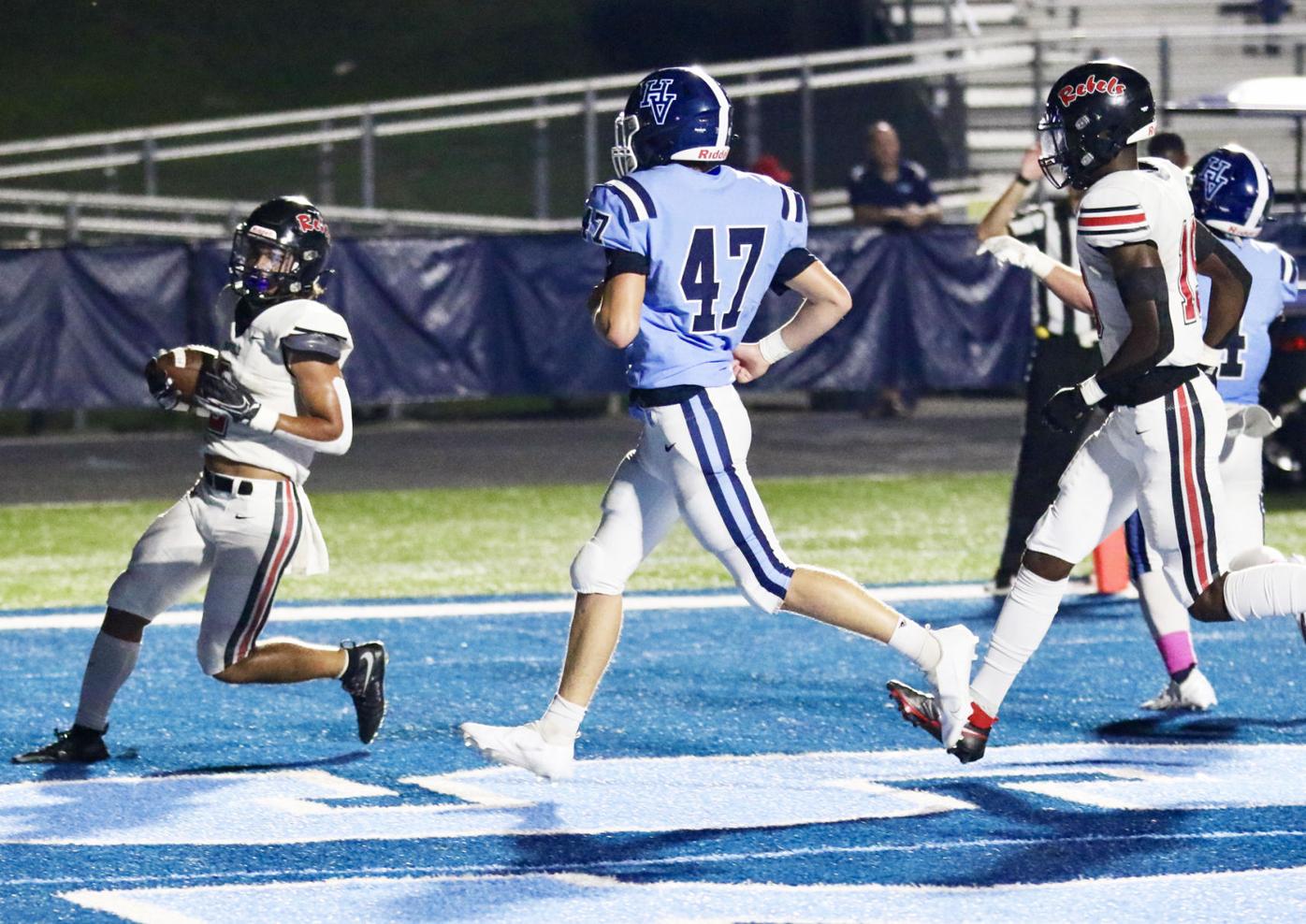 Maryville's Noah Vaughn runs into the end zone for a touchdown during the first quarter of a Region 2-6A win at Hardin Valley on Friday. 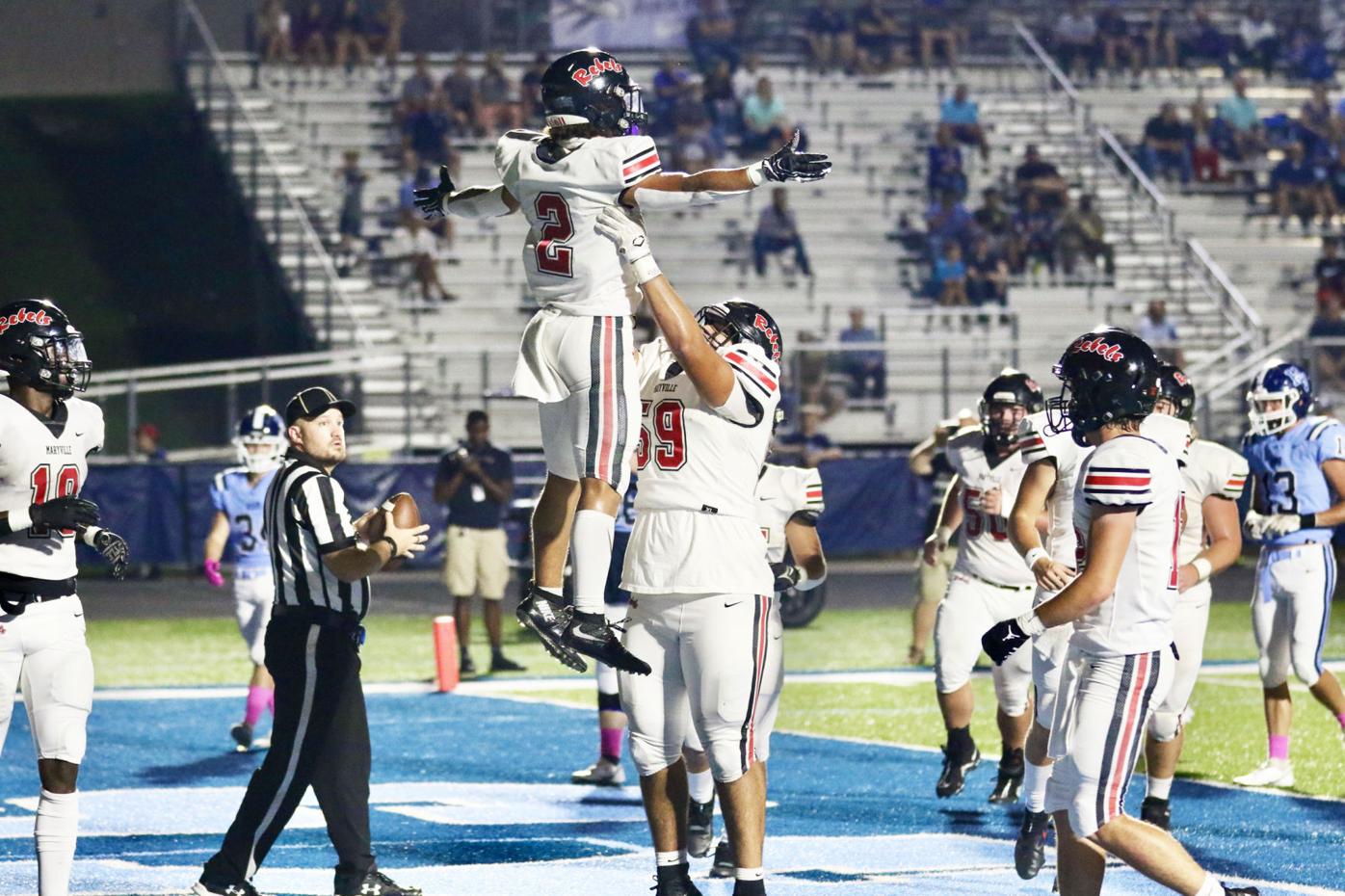 Maryville's Noah Vaughn runs into the end zone for a touchdown during the first quarter of a Region 2-6A win at Hardin Valley on Friday.

KNOXVILLE — Maryville came into its Region 2-6A bout Friday at Hardin Valley the clear favorite, but that didn’t matter in the team meeting room.

Despite facing a winless foe, the Rebels focused on maintaining the same level of dominance it displayed against Cleveland before fall break, and it paid off. They demolished the Hawks, 61-3, taking control early in building a 42-point lead in the first half.

“We played fast,” Maryville coach Derek Hunt told The Daily Times. “That was kind of the message all week was the standard’s the standard. Obviously Hardin Valley, not having the kind of year that they’d like to have, but that doesn’t need to affect how we come out and perform.

“Our goal this week was to play fast and with purpose. I thought we did that early on. We weren’t perfect by any means, but we did play fast, and that’s what I was excited about.”

Maryville (8-0, 4-0 Region 2-6A) did most of its damage on the ground, with four of its five first-half offensive touchdowns coming via run plays. The Rebels held the Hawks to just 10 yards on 19 total carries while racking up 202 yards on 27 carries themselves; they finished with 398 total yards and kept the Hawks to 76.

Maryville junior running back Noah Vaughn scored a 1-yard touchdown on the Rebels’ opening series, and then senior defensive end Mike Bethea scooped up a fumble on Hardin Valley’s ensuing possession and ran it back for a touchdown.

Hardin Valley stressed Maryville’s defense on its second drive, moving the ball down the field and kicking a 39-yard field goal. But the Rebels’ offense responded with a 4-yard touchdown on a fade pass from quarterback Carson Jones to standout receiver Markel Fortenberry.

Vaughn notched his second touchdown on a 13-yard run before the first quarter expired and didn’t receive much work after that, finishing with 99 yards on just six carries.

“(Vaughn) is tough,” Hunt said. “He’s physical. He runs fast. He can catch it out of the backfield. He’s a really good football player and I think he can still get better. I think he’s just now scratching the surface of what he could be. So it’s my job as his coach to stay on him and make sure that he reaches his full potential, and that’s going to be our goal.”

A 41-yard field goal by Corbin Price was sandwiched between two rushing touchdowns by Gage LaDue — the first a 1-yarder and the other a 5-yarder — in the second quarter. While the Rebels’ rushing attack started with Vaughn, it stayed just as strong with LaDue toting the ball, as he often has this season.

“I’m just going to do my best, push myself like the rest of my teammates,” LaDue said.

By halftime, the Rebels were already past the 35-point deficit needed for a running clock in the second half, leading 45-3.

Backups and reserves took the field for the game’s final two periods. Price hit a 31-yard field goal in the third quarter, while Jacob Morris ran for a 1-yard touchdown and Tezz Dozzier ran back an interception for a 47-yard pick-six in the fourth.

Those plays capped off an easy night for Maryville, which maintains its undefeated record heading into the final two games of the regular season.

“I think we can do a lot together,” LaDue said. “I’m excited to see what happens, sorta like everyone else is.”

The Rebels’ next two games are two of their toughest regular-season draws: home matchups against Knoxville West and Bradley Central. West is 7-1 and nearly beat Alcoa earlier this season, while Bradley Central is 8-0 and tied with Maryville for first place in Region 2-6A.

“The great part about our last two games is they’re going to be playoff-like atmospheres,” Hunt said. “At home against Knox West who’s a fourth-and-8 stop against Alcoa away from being undefeated. Then you turn around and you’ve got Bradley Central, who will probably be undefeated coming in there for a region championship game.