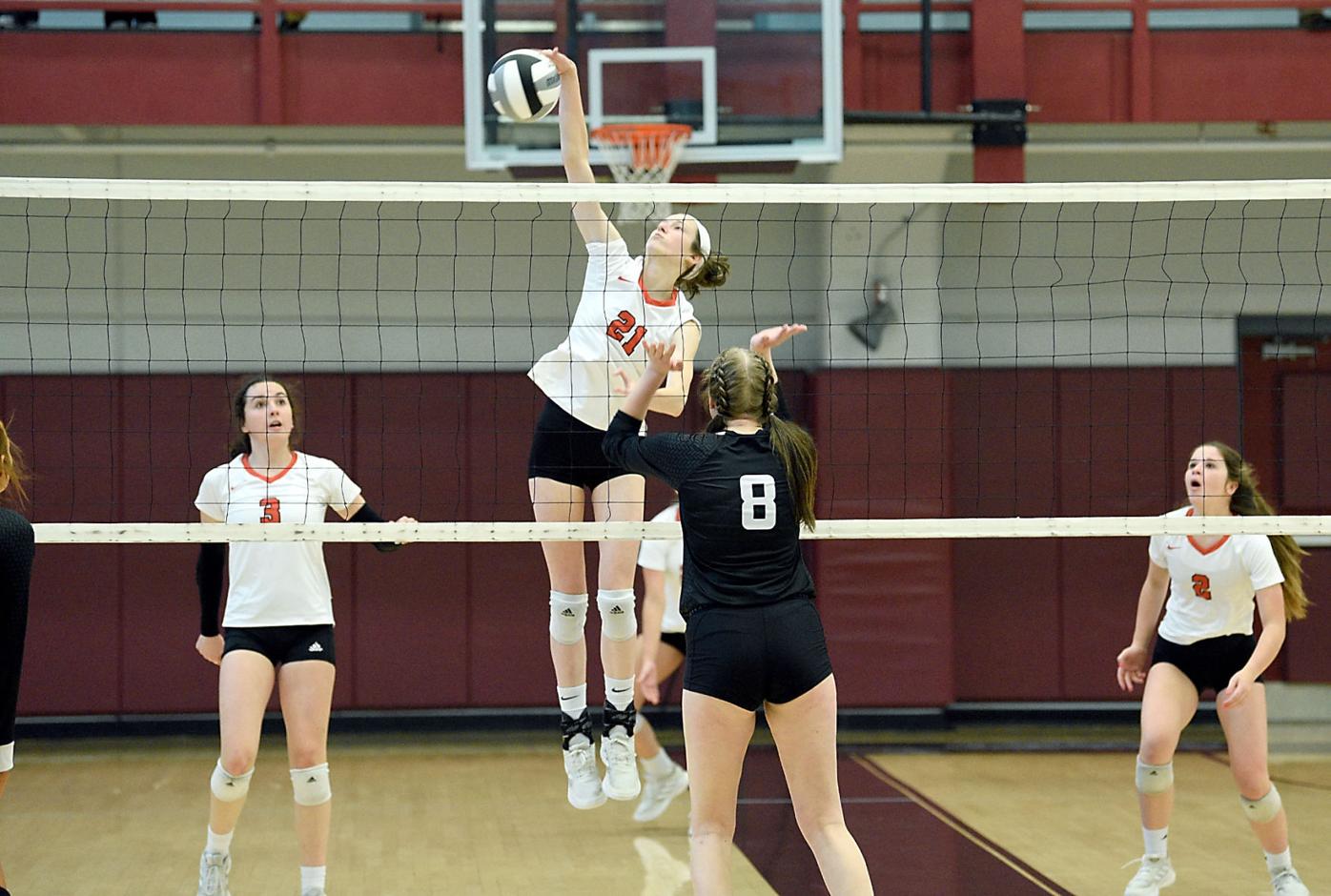 Maryville’s Kiernan Stamey (21) scores in the middle of the court in the Lady Rebels’ match against Alcoa Monday night during the Blount County Volleyball Tournament at Alcoa. 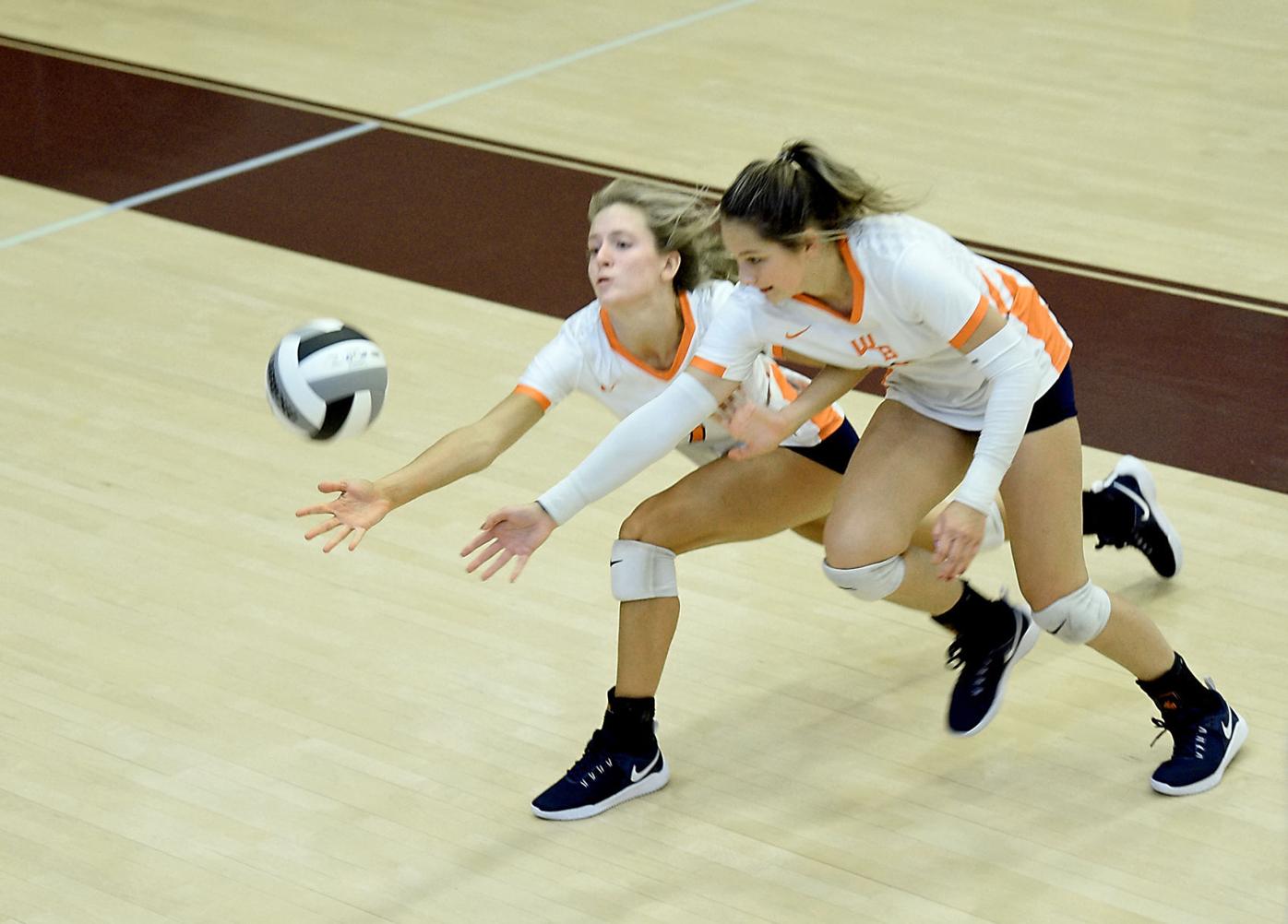 William Blount's Gracie Love (7) and Karoline Bell (13) chase a ball that fell just out of reach Monday night during the Blount County Volleyball Tournament at Alcoa. 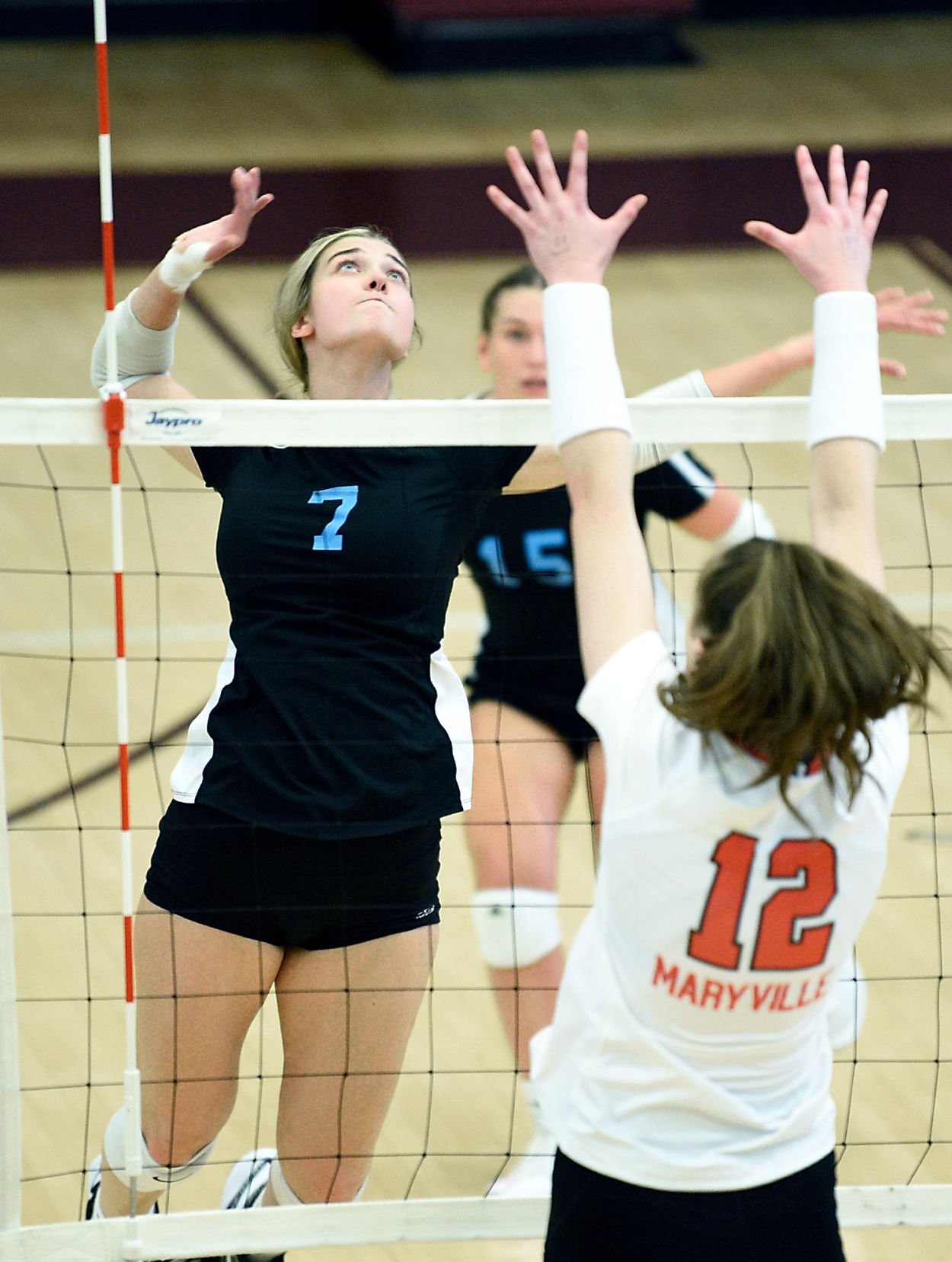 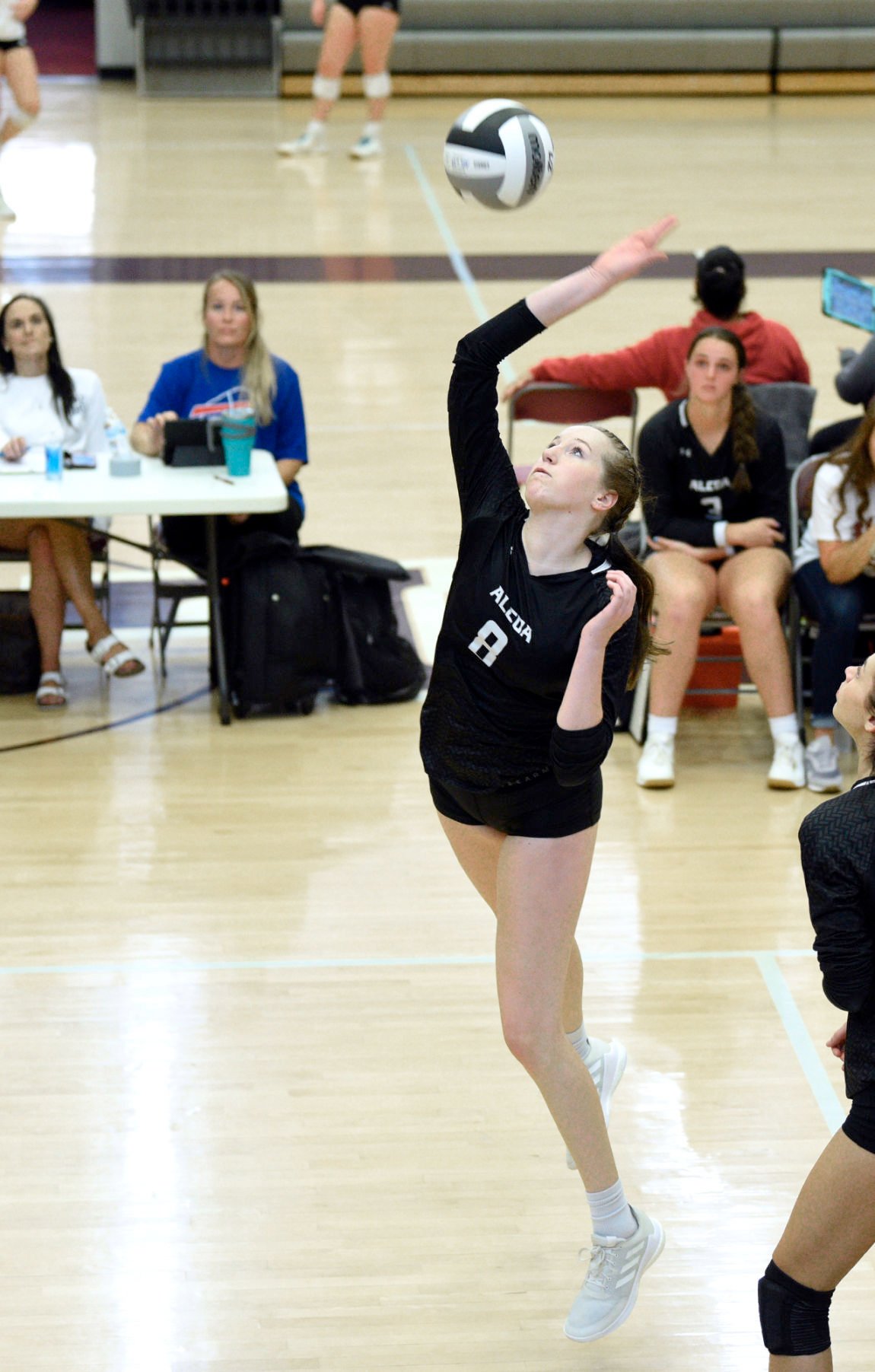 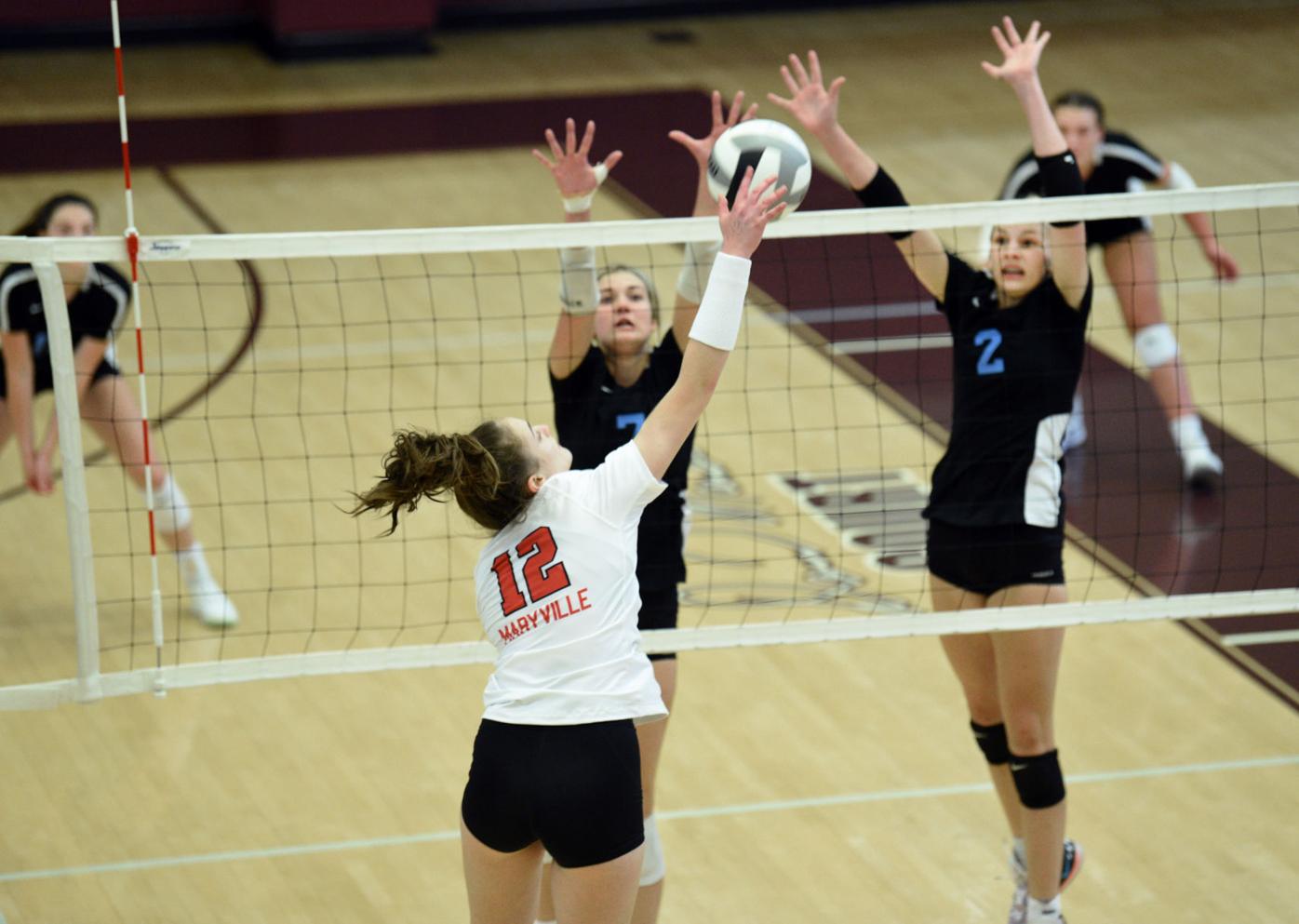 Maryville’s Amanda Mack (12) attacks at the net in a match against Heritage in the Blount County Volleyball Tournament on Sept. 27 at Alcoa.

Maryville’s Kiernan Stamey (21) scores in the middle of the court in the Lady Rebels’ match against Alcoa Monday night during the Blount County Volleyball Tournament at Alcoa.

William Blount's Gracie Love (7) and Karoline Bell (13) chase a ball that fell just out of reach Monday night during the Blount County Volleyball Tournament at Alcoa.

Maryville’s Amanda Mack (12) attacks at the net in a match against Heritage in the Blount County Volleyball Tournament on Sept. 27 at Alcoa.

The Maryville volleyball team hadn’t been inside a gym for nearly a week before Monday.

The Lady Rebels didn’t look like it in their first outing in five days at the Blount County Tournament on Alcoa’s David Marsh Court. Maryville swept District 4-3A rivals Heritage and William Blount as well as host Alcoa in six combined sets.

“To be honest, we haven’t practiced,” Lady Rebels coach Chris Hames told The Daily Times. “We played last Wednesday and haven’t been in a gym until today, so I was a little bit worried in regards to that because I kind of gave them a couple of days off and we were a little bit rusty to begin with so I knew that was a risk.”

Hames’ team mitigated those concerns early in their first match against William Blount, shaking off a slow start to win the first set, 25-14, and the second, 25-13, to start the tournament at 2-0.

The Lady Rebels and Lady Mountaineers went back-and-forth in the first set, but after a 10-10 tie, Maryville managed to hang on to its lead and held off Heritage late to win, 25-19, before taking the second set, 25-12.

In their final match of the tournament, the Lady Rebels had little trouble with the Lady Tornadoes, winning both sets 25-8.

The lopsided score allowed Hames to toy with her lineup and provided valuable playing time to her bench. The starters were happy to see it.

“It’s important (to play the bench) because those players that came in have been playing varsity only so they’re not getting the chance to play on JV,” Hames said. “I think for us, it’s important because moving forward every game we play is going to be tough. It gave us an opportunity to get girls in and it’s fun. The good thing about my kids is they’re excited when the other girls get to get in and they’re cheering for them. That makes it kind of sweet.”

In three matches, Maryville finished with 26 aces and 67 kills as senior Amanda Mack accounted for 16 of those kills and fellow seniors Maggie Sanderson and Kylie Hopkins added 16 and 14 more, respectively.

For Heritage coach Jason Keeble, the Lady Mountaineers (19-6, 4-2 District 4-3A) did what they were supposed to do in wins over the Lady Governors and Alcoa.

Melanie Morris combined for 10 kills while Aubrey Pierce had eight in both match wins as Heritage swept both teams before falling to Maryville and finishing second in the tournament.

“We took care of business against Alcoa and William Blount,” Keeble said. “The standard is Maryville, obviously. They finished first in the district. We played them in a real match earlier this season and three of the five sets, I liked the way we competed. We’re playing them better in the sets but you have to play them clean and perfect and I feel like in that second set we couldn’t pass the ball.

“I thought when we served well and passed the ball, we made some runs there but then we’d shoot ourselves in the foot and you can’t do that against Maryville.”

Keeble knows Monday wasn’t the last time his team would get a crack at the Lady Rebels with the district tournament coming up next week, but the Lady Mountaineers face a tough two game stretch to end the regular season before then against Cleveland on Wednesday and Knoxville Catholic on Thursday, both on the road.

“We’re doing something right,” Keeble said. “It’s just when we face Maryville, it’s a confidence thing. The inexperience shows and they kind of get tight when we play (Maryville) in a match. Hopefully we’ll relax going into the (district) tournament. We get Cleveland on Wednesday and then we go to Cathlic, so that will be a great test.”

Gracie Love spoke up in William Blount’s huddle in between the first and second set with Alcoa.

The senior outside hitter tried rallying her teammates after narrowly escaping the Lady Tornadoes in the first set, 27-25.

“(Loves) is definitely our leader,” Lady Govs coach Kendra Swafford said. “She pretty much told them that we can play and we need to show them by just playing our game. That’s been our biggest message all year.”

Love’s message resonated and William Blount closed out the second set with a 25-17 win to finish the tournament 2-4.

Since the Lady Govs’ last match in the same building against their three county foes in the preseason, Swafford has seen her youth-laden team grow up and they showed it against Alcoa.

“Our passing has gotten a lot better,” Swafford said. “We’re still on this up-and-down roller coaster because we have only three girls who have played varsity volleyball before, so I think we’re starting to learn how to play varsity volleyball.”

Alcoa coach Sam Thomas had an idea where the Lady Tornadoes would finish on Monday.

His team went 0-6 against the field, but the matches were more of a learning tool than anything else as Alcoa prepares for its District 2-3A.

“Tonight was big for us,” Thomas said. “It gave us an opportunity to get a lot of playing time with this unit and we worked on some different rotations, some different things that I needed to work on. I really challenged them and they stepped up tonight, I was really proud of them.”

The best rotation the Lady Tornadoes featured was the one that included seniors Kylie Haas and Caleigh Carruthers, who both made the All-Blount County Tournament Team for their performances.

“My seniors were awesome tonight,” Thomas said. “I was so proud of them. They both really stepped up and were smart. They were very good about carrying themselves. Overall, I felt like we made progress moving forward, which was the big thing.”