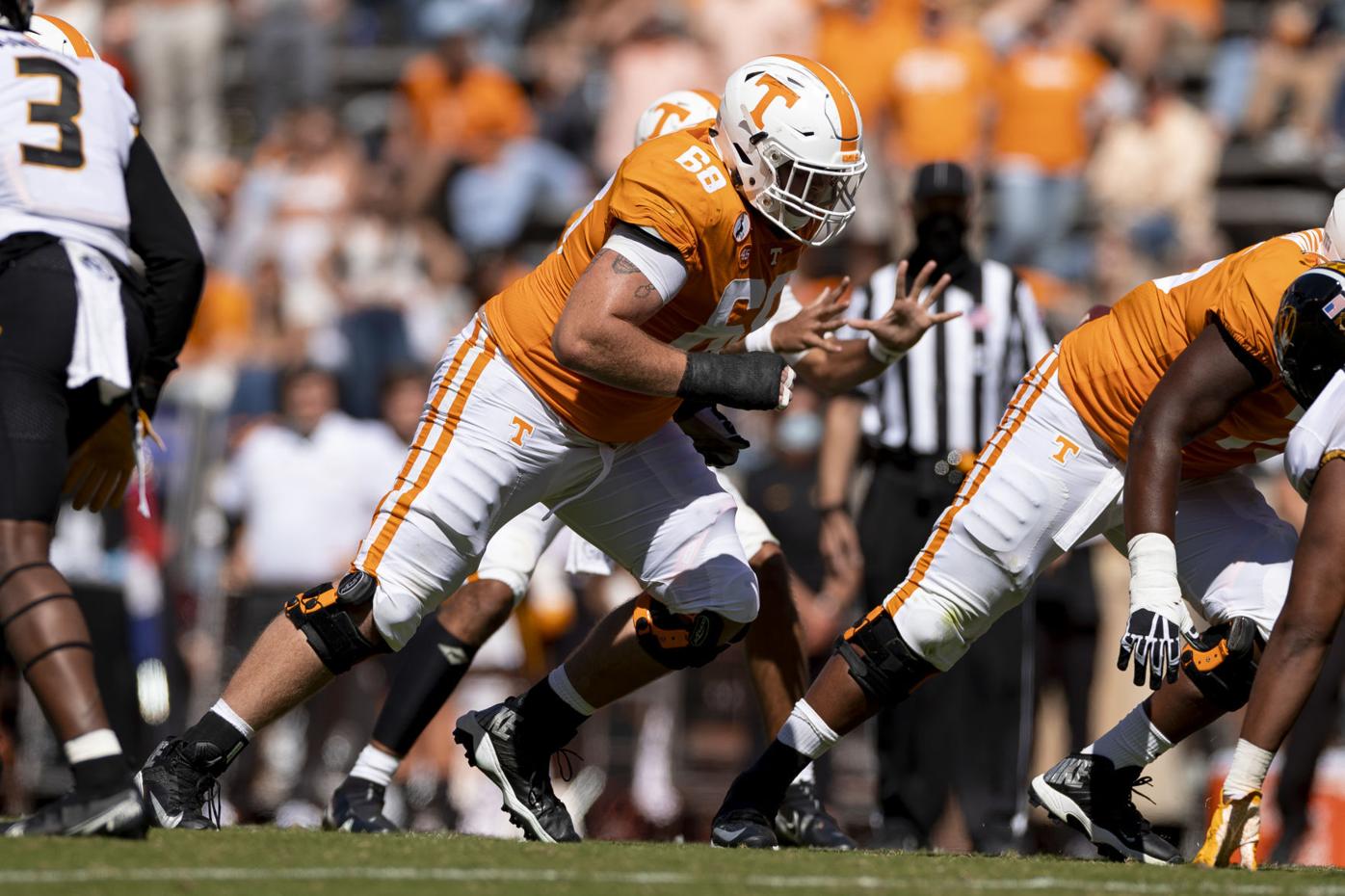 Tennessee offensive lineman Cade Mays (68) looks for a defender to block on Saturday during the Vols’ 35-12 win over Missouri at Neyland Stadium in Knoxville. 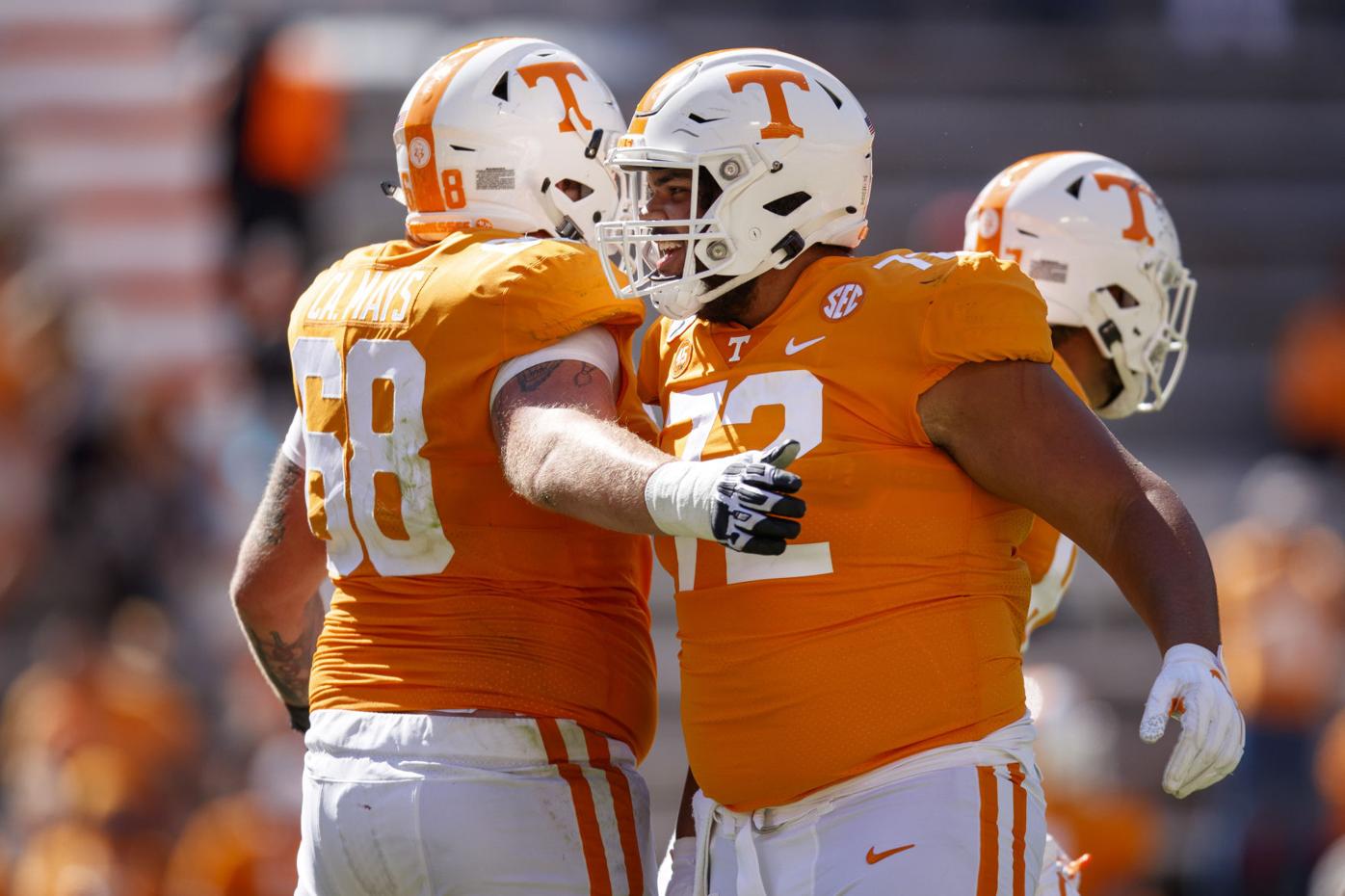 UT offensive linemen Cade Mays (68) and Darnell Wright (72) get back to the huddle Saturday after a play against Missouri at Neyland Stadium in Knoxville.

Tennessee offensive lineman Cade Mays (68) looks for a defender to block on Saturday during the Vols’ 35-12 win over Missouri at Neyland Stadium in Knoxville.

UT offensive linemen Cade Mays (68) and Darnell Wright (72) get back to the huddle Saturday after a play against Missouri at Neyland Stadium in Knoxville.

KNOXVILLE — Plenty of hype surrounded Tennessee’s offensive line ahead of this season.

On Saturday against Missouri, the Volunteers proved it might be warranted as they ran over the Tigers at Neyland Stadium en route to a 35-12 win — their eighth straight victory.

“Ever since I’ve been here, we have always had great running backs — not just good players but great guys as well,” Tennessee left guard Trey Smith said. “They come to work every day, and you want to go to war for a guy like that.”

The evidence of the offensive line’s impact against the Tigers (0-2) was everywhere. The Vols (2-0) recorded 422 offensive yards, 232 of which were rushing, and not a single Tennessee running back had a run for negative yardage.

The offensive line was bolstered by Georgia transfer Cade Mays, who made his debut as a Vol against the Tigers after being ruled eligible by the SEC on Wednesday. Mays joins Smith, left tackle Wayna Morris and right tackle Darnell Wright as Tennessee linemen rated as five-star prospects.

“Cade’s a great asset to this football team,” Tennessee quarterback Jarrett Guarantano said. “We have eight or nine deep that are very good football players at the offensive line, so they can really be plugged anywhere.”

Tennessee coach Jeremy Pruitt utilized that depth with more rotation up front — something more typical for a defensive line than an offensive one. But Smith said that didn’t affect the rhythm of the group.

“It’s a very physical game — you have plays where you get banged up,” Smith said. “We know our duties, we know our assignments, so it’s just next-man-up mentality.”

Thanks in large part to UT’s blocking, Missouri didn’t have an answer for running backs Eric Gray and Ty Chandler, who combined for almost 200 rushing yards while contributing a touchdown apiece.

Guarantano benefited from the protection as well, passing for 190 yards and a touchdown along with a pair of rushing scores.

The offensive line also proved crucial in third and fourth-down situations — an area in which the Vols struggled last week against South Carolina. After only converting on 1-of-11 third downs against the Gamecocks, Tennessee converted on 5 of 13 against Missouri

“That’s five more than we had last week,” Pruitt said. “We’ve got to continue to work hard to be a good third down team on both sides of the ball. A lot of it has to do with first and second down. It’s a lot easier to make third and six inches than it is third and 16.”

The Vols were 4-for-4 on fourth down — marking the first time they have converted more than three fourth-down attempts in a game since going 3-for-3 against North Texas in 2015.

Gray also became the first Tennessee player to rush for a touchdown in four straight games since Joshua Dobbs did so in 2016.

“The offensive line played great,” Gray said. “For us to rush for 230 against a great defense — against a defense that was well-coached, that did a lot of stunts that we practiced on this week. I feel like they came out and really executed. Cade is a big addition to the group, to the family. We are grateful to see him back in orange where he’s supposed to be.”

Morris — who missed much of the preseason while in quarantine — also made his presence felt with a pair of crucial blocks on Gray’s two first-half touchdowns.

“On the first touchdown, his kickout (allowed) me to be able to squeeze by him and get the touchdown,” Gray said. “We practice all week — him coming out on that screenplay and blocking that corner. He made two big blocks, and I’m thankful for it.”

Next up for Tennessee is No. 4 Georgia on the road. In their season opener, the Bulldogs held Arkansas to just 77 rushing yards.

“The last two years we’ve played them, they’ve had a really good football team,” Pruitt said. “They’ve got good players. They’ve got good coaches, but we do, too. That’s why I came to UT, and that’s why these players came to Tennessee — to play in big games like this.”