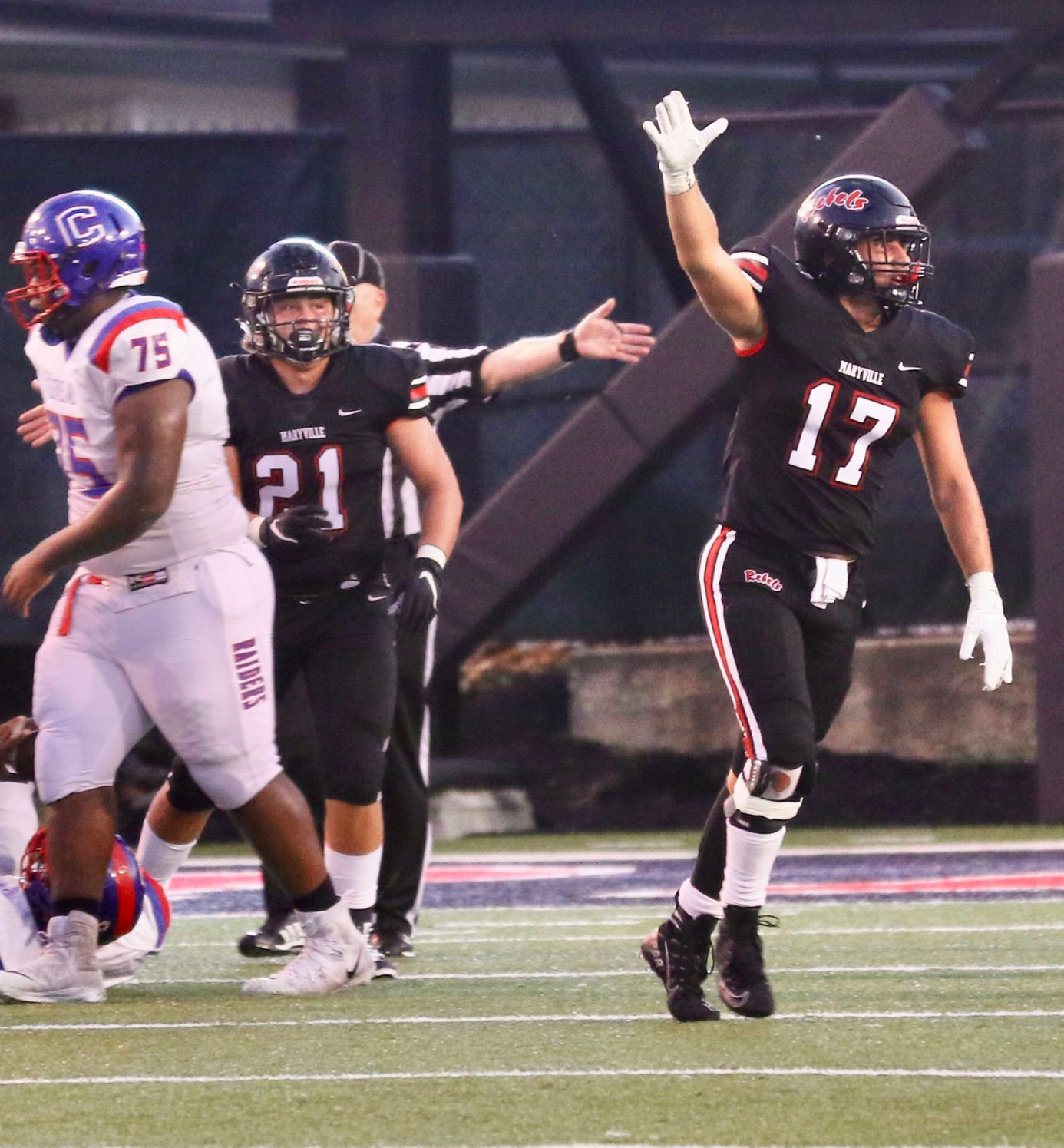 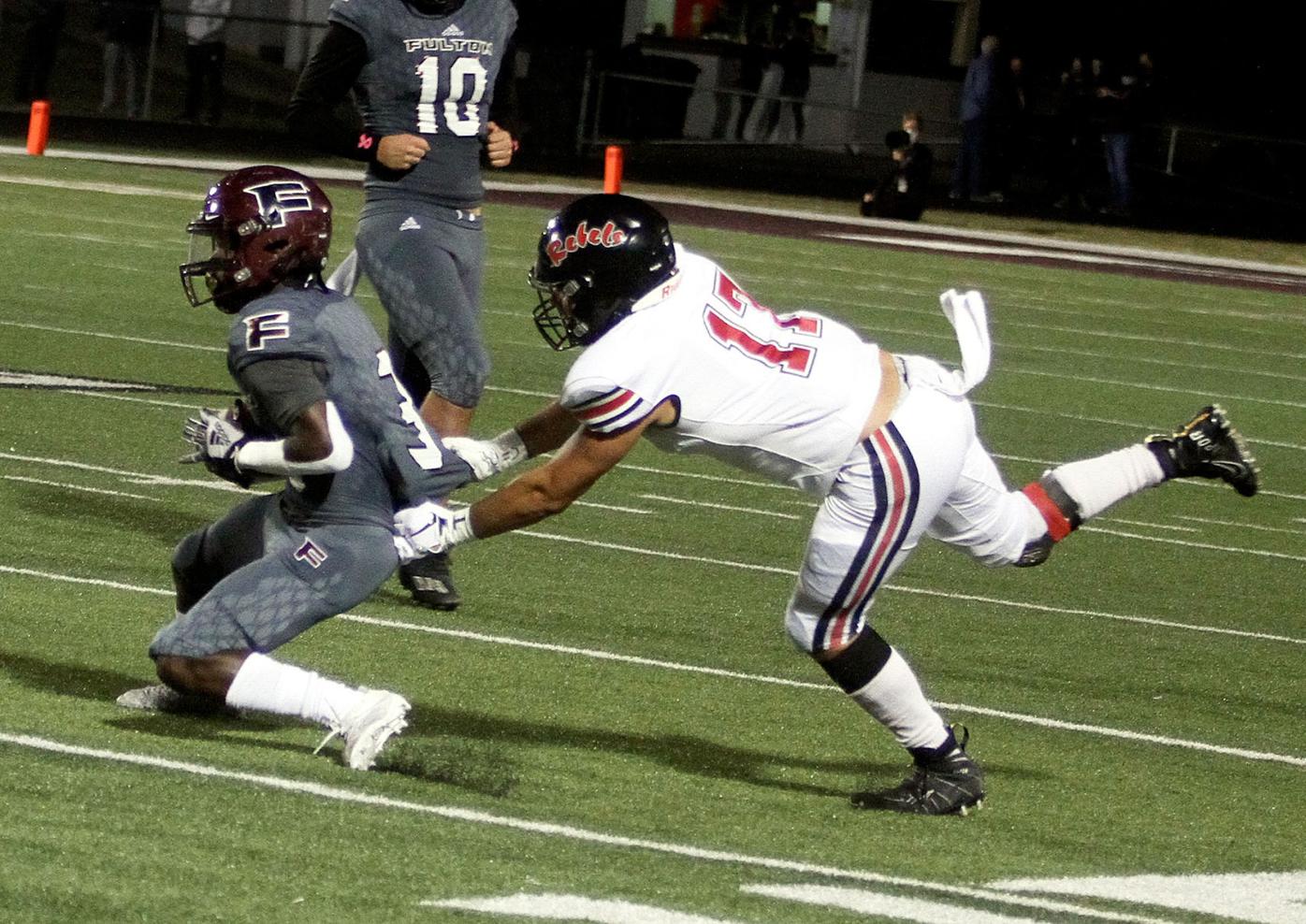 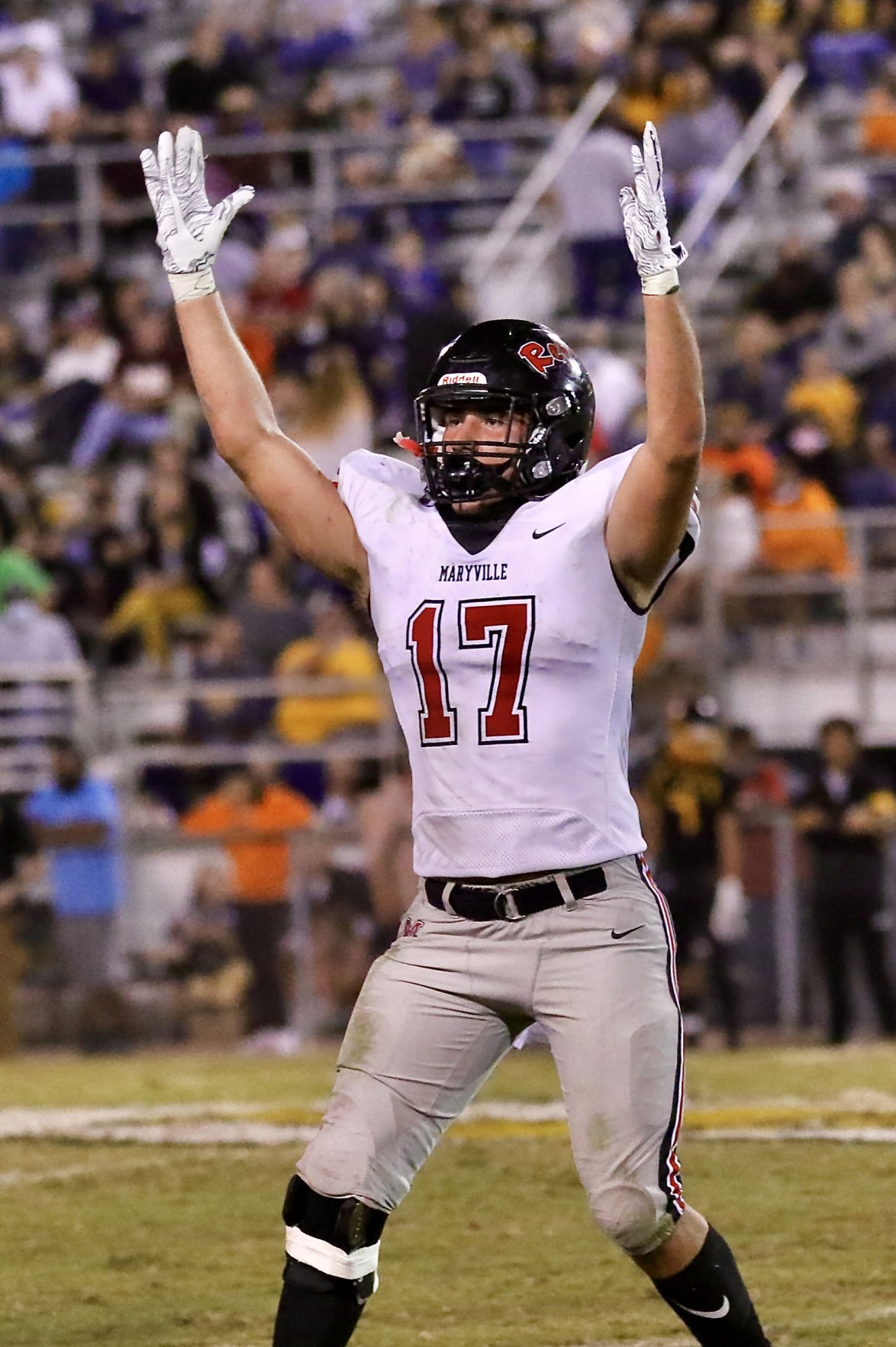 Maryville’s Lou Burchfield works to get the Maryville fans excited Friday to start the fourth quarter of a Region 2-6A game against McMinn County in Athens.

Maryville’s Lou Burchfield works to get the Maryville fans excited Friday to start the fourth quarter of a Region 2-6A game against McMinn County in Athens.

Lou Burchfield saw how Dobyns-Bennett lined up on fourth-and-4 from the Maryville 6-yard line and knew exactly what was coming inside J. Fred Johnson Stadium on Nov. 22, 2019. The outcome was no longer in doubt. The Rebels were a quarter away from advancing to the 2019 Class 6A semifinals to face Oakland, but the then-junior linebacker wanted to keep the Indians out of the end zone.

Burchfield waited for the left tackle to block to his right before darting into the backfield, meeting Dobyns-Bennett quarterback Zane Whitson as he rolled back to his left for a sack.

“He’s a student of the game,” Maryville coach Derek Hunt told The Daily Times. “I’m always impressed when we go out there on a Friday night how much of a feel he has for what’s coming — almost like a coordinator. You can tell he studies it because he puts himself in such good position to make plays.

“He does such a phenomenal job with that, but he also plays with a relentless motor.”

It was the final snap Burchfield played that night, capping a breakout performance that included several tackles, another sack and a pair of fumble recoveries, the first of which came after Maryville went three-and-out on its opening possession and Dobyns-Bennett was in the red zone, on the threshold of grabbing some early momentum.

The Rebels scored on their next seven offensive possessions, cruising to a quarterfinal victory en route to the program’s 17th state championship a couple weeks later.

“We started to see it throughout the year, but that’s when the heads-up player that he is emerged on the field,” Maryville linebacker Kenny Cobble said. “We had some fantastic players on the field that night, but he was at the top of the list.”

Burchfield traversed a long, winding road in the two years leading up to that night in Kingsport, and in that moment as the Rebels walked off the field, he knew he had finally arrived as the impact player he believed he could be all along.

“I felt like that game showed everyone else that I was more than capable of contributing with the big dogs,” Burchfield said. “It showed a lot of people that I was part of the future of Maryville and I could be one of the best players on this year’s team.”

He has lived up to that billing this season — the unquestioned leader of a defense that has yet to allow an opponent to score more than 13 points — but it was not too long ago that none of that seemed possible.

Burchfield was ready to hang up his cleats, and who could blame him.

He suffered a season-ending ACL tear as a freshman and endured “one of the biggest knee surgeries you can have,” battling back in time for Maryville’s season opener against Knoxville Catholic on Aug. 17, 2018.

His return to the field was short-lived.

A few plays into the Rebels’ first defensive series, Burchfield’s right knee gave out again. It was another ACL tear, derailing what he hoped was a promising season — one he thought could have included a performance similar to the one he delivered against Dobyns-Bennett a year later.

“If my knee wouldn’t have given out, I think I would have been completely ready and able to make an impact on that team,” Burchfield said.

Instead, months of physical therapy awaited. In total, he spent 14 months rehabbing with nothing more than a few snaps of football in between. There were times where he considered a premature retirement from the game he loved.

“Especially at that age, you just don’t really know how somebody is going to battle back from one setback, let alone twice,” Cobble said. “He made a decision that he was going to give it one more chance, and if it worked out he was going to make it the best he could, and if it didn’t, he was done with it.

“To see him come out and be who he is today, it’s storybook really.”

Burchfield would love to have those two years of high school career back, but he would not rewrite any chapter of his story. It has given him perspective and an appreciation for every opportunity he gets to don red and black on Friday nights.

“It makes me cherish the fact that I’m here and having fun,” Burchfield said. “I told myself after that moment if I’m ever not having fun playing football, I’m just going to hang it up.”

There has never been a reason to think Burchfield has played his last down at Maryville.

He watches film every day, logging countless hours to know the ins and outs of every offense he faces. He shows up for every practice with enthusiasm and takes the field each game with a chip on his shoulder.

“I think his journey has certainly strengthened his passion and his resolve,” Cobble said. “As much I hated to see all that happen to him, I think it has had an effect on how he approaches things and how he views things.

“He’s not a kid that is ever looking at the next thing or tired of the current thing. He is always in the moment, and that’s because of what he’s been through.”

Maryville would not be in the conversation of being one of the best defenses in the state if not for Burchfield, and yet, he refuses to acknowledge that.

As good as he is on the field, he is somehow a better fan of his teammates.

“If I wasn’t here, we would be just fine,” Burchfield said. “I’m not the only reason our defense is successful; we have an amazing pass rush, we have outstanding linebackers and our defensive backs are phenomenal. I just happen to be one of the only two-year starters.

“I feel like I just get listened to a lot, but if they have anything to say, I’m going to respect them. I feel like that’s what our defense is about because we respect each other and we play for each other.”

Burchfield started the season at strong side linebacker before converting to the Bandit position — a defensive end/linebacker hybrid — and did not skip a beat.

He leads the Rebels with 101 tackles (19 for loss, including two sacks) while also recording three forced fumbles and three fumble recoveries in 11 games — he missed the season opener against William Blount because of COVID-19 contact tracing.

“He’s physical, he tackles well and his football IQ is through the roof — maybe as smart as any kid I’ve ever coached — but what stands out most is how passionate he is about playing,” Cobble said. “He’s so in the moment all the time.”

Maryville entered the season with a cloud of doubt hovering its program after losing 17 starters from last year’s state championship team. Eight of those starters departed from the defensive side of the ball, and Burchfield has embraced being the leader of a defense that is out to prove people wrong.

Twelve games in, the Rebels have been utterly dominant, but that means nothing to them at the moment.

“We haven’t proven ourselves until we win a Gold Ball,” Burchfield said. “I feel like in three weeks, we’ll be talking about how we proved ourselves.”

Burchfield has shown he is capable of performing at his best when it matters most, and Maryville has no reason to think he will not do it again as it chases a second consecutive Class 6A BlueCross Bowl championship.