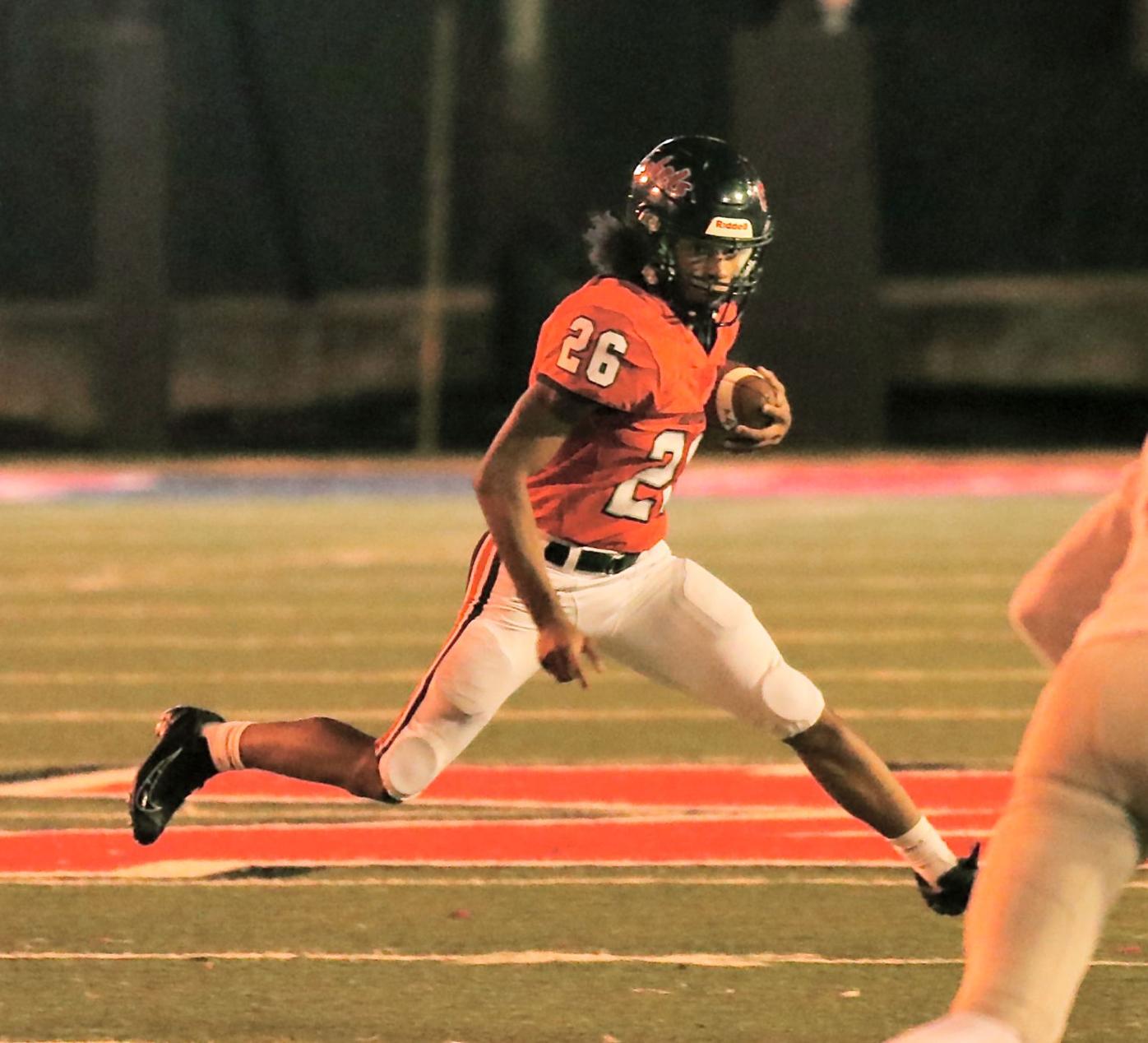 Maryville sophomore Tezz Dozier (26) runs Friday to pick up a first down for the Rebels against Ooltewah during a Region 2-6A game at Shields Stadium. 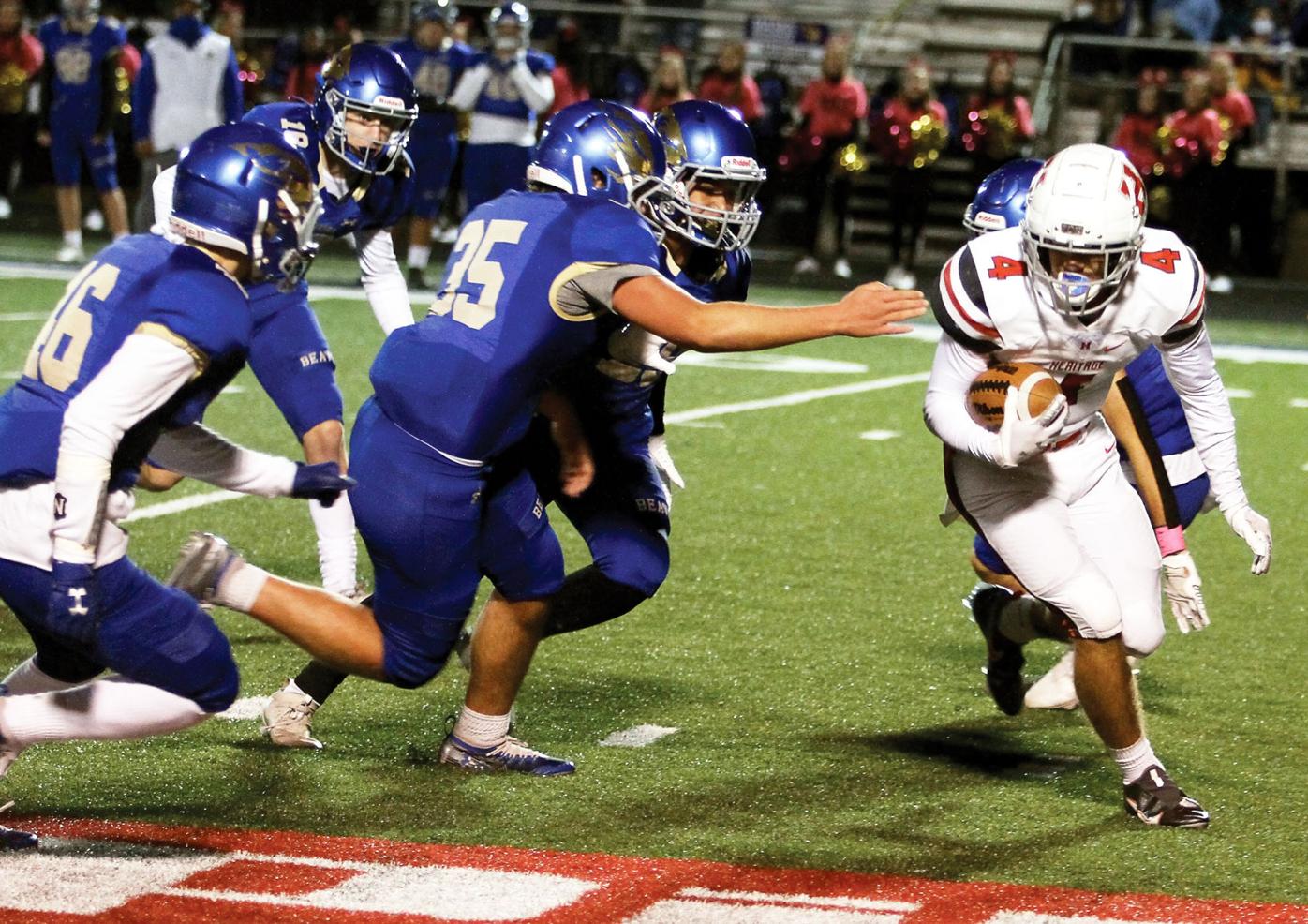 Heritage’s Triston Hurst looks for a way past a line of Karns players Friday.

Maryville sophomore Tezz Dozier (26) runs Friday to pick up a first down for the Rebels against Ooltewah during a Region 2-6A game at Shields Stadium.

Heritage’s Triston Hurst looks for a way past a line of Karns players Friday.

During its 56-12 blowout win over Region 2-6A foe Ooltewah on Friday, Maryville was near-perfect on third down, converting eight of the nine third downs it faced, but it was the Rebels success on first down put them in manageable second and third-down situations.

“The big thing was we were positive on first down,” Hunt told The Daily Times. “So you get to second-and-medium, then you get to third-and-short, and you’re able to convert that stuff. Instead of being second-and-10, and now you might have to throw it or get a chunk in the run game to try to have a chance to convert on third.”

McGill averaged 5.6 yards per carry, often gaining more than half the yards needed for a first down on a single rush. Combined with Jones’ effective 18-of-19 passing mark, the Rebels put together a recipe for a dangerous ball-control offense.

“I was proud of our offense for coming out and getting a quick start,” Hunt said. “We were balanced and we executed really well.”

William Blount’s offense struggled to consistently move the ball in Friday night’s 38-28 loss to Bradley Central, but a pair of Governor’ receivers made big plays to help WB remain in striking distance.

The first came late in the first half when sophomore receiver Ashton Auker caught a pass at the first down marker before breaking a pair of tackles and taking it 51 yards for the touchdown. Auker caught five passes for 81 yards on the day while also adding a crucial interception in the third quarter.

“He made some plays,” William Blount head coach Philip Shadowens said. “He’s a really talented sophomore. He really made some plays for us, we just have to find ways to make more plays to win football games.”

Auker wasn’t the only WB receiver that made big plays Friday.

Sophomore Job Mattossian hauled in eight catches for 77 yards including an impressive 28-yard touchdown on a fade route. The score cut Bradley Central’s lead to three points midway through the fourth quarter.

Alcoa was down to just one experienced quarterback in Friday night’s 41-0 shutout of Kingston. With Zack Lunsford out due to COVID-19 contact tracing protocol, the Tornadoes went start to finish with Cam Braden behind center.

The junior looks to be recovered from an ankle injury he suffered earlier in the season, but Alcoa coach Gary Rankin and offensive coordinator David Sweetland still limited Burden to the pocket, opting to call no running play for the converted wide receiver.

Burden completed 8 of 11 passes for 66 yards, with his main role being to corral several high snaps and hand the ball off to the extraordinarily deep and talented pool of runners that Alcoa enjoys this season.

Seven different backs had carries, with six of those contributing In the first two quarters, as Alcoa raced out to a 35-0 halftime lead.

Ahmaudd Sankey led all rushers, averaging 10 yards per carry in his seven totes, including two touchdowns. Freshman Elijah Cannon followed Sankey with 50 yards in just two carries, including a quick bolt slicing through the Yellow Jackets defense for a 28-yard rushing score. Sophomore Jordan Harris had two productive runs on the same possession.

Ronald Jackson, in addition to opening the game with an 85-yard kickoff return score, had two carries for 11 yards and fellow wideout Isiah Cox rushed 20 yards on a jet sweep.

Junior Itty Salter completed the running back carousel with three runs on Alcoa’s final possession of the game.

“We had a lot of kids do a lot of good things,” Rankin said.

Heritage gets big returnsHeritage’s skill players have continued to make plays throughout the season. During Friday’s 40-30 loss to Karns, they were lethal in the kicking game.

Spencer Williams shrugged off a few tackles and returned the ball to the Karns 47 on a kickoff return in the first quarter. In the second quarter, Triston Hurst spotted a lane and weaved through Karns’ tacklers for an 85-yard return.

After Hurst’s score, the Beavers elected to kick the ball short, giving Heritage excellent field position for the remainder of the game.

The Mountaineers’ average starting field position was the Karns 40, with three of their eight drives beginning in Beavers’ territory.

The King’s Academy has gone from a two-win team that barely made the playoffs to a program that is on the fringe of being a state championship contender in a matter of two years.

The only thing separating the Lions from the pinnacle of Division II-A is a signature victory over the upper echelon of the classification. Six turnovers prevented TKA from beating long-time rival Friendship Christian on Sept. 25 and it played just as poorly in a 49-17 loss to Donelson Christian on Friday with first place in the region on the line.

“Tonight, there were two teams who were both very talented, but one team played a lot better than the other team,” The King’s Academy coach Jonathan Sellers said. “There are a lot of things we didn’t do great, and I know my guys expect more out of themselves.

“We played bad, and you get beat bad when you play bad.”