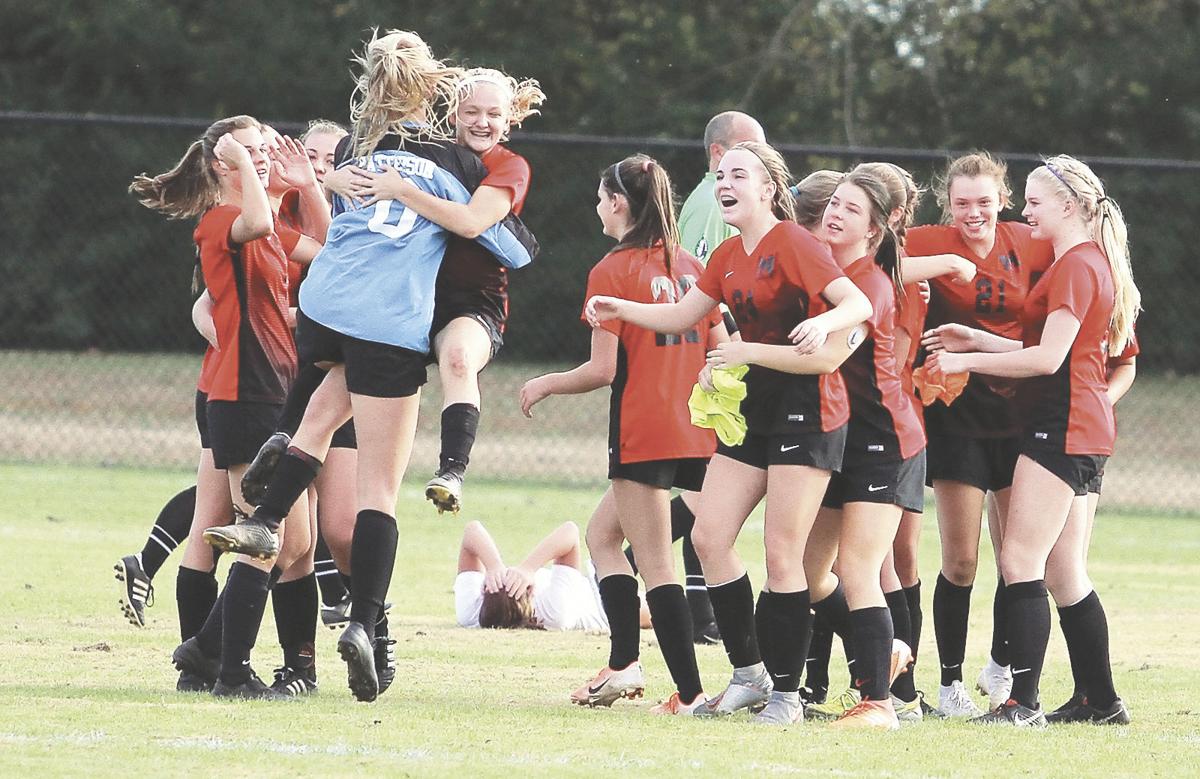 Maryville celebrates its 3-2 win over Science Hill Wednesday in the first round of the Class AAA state tournament. 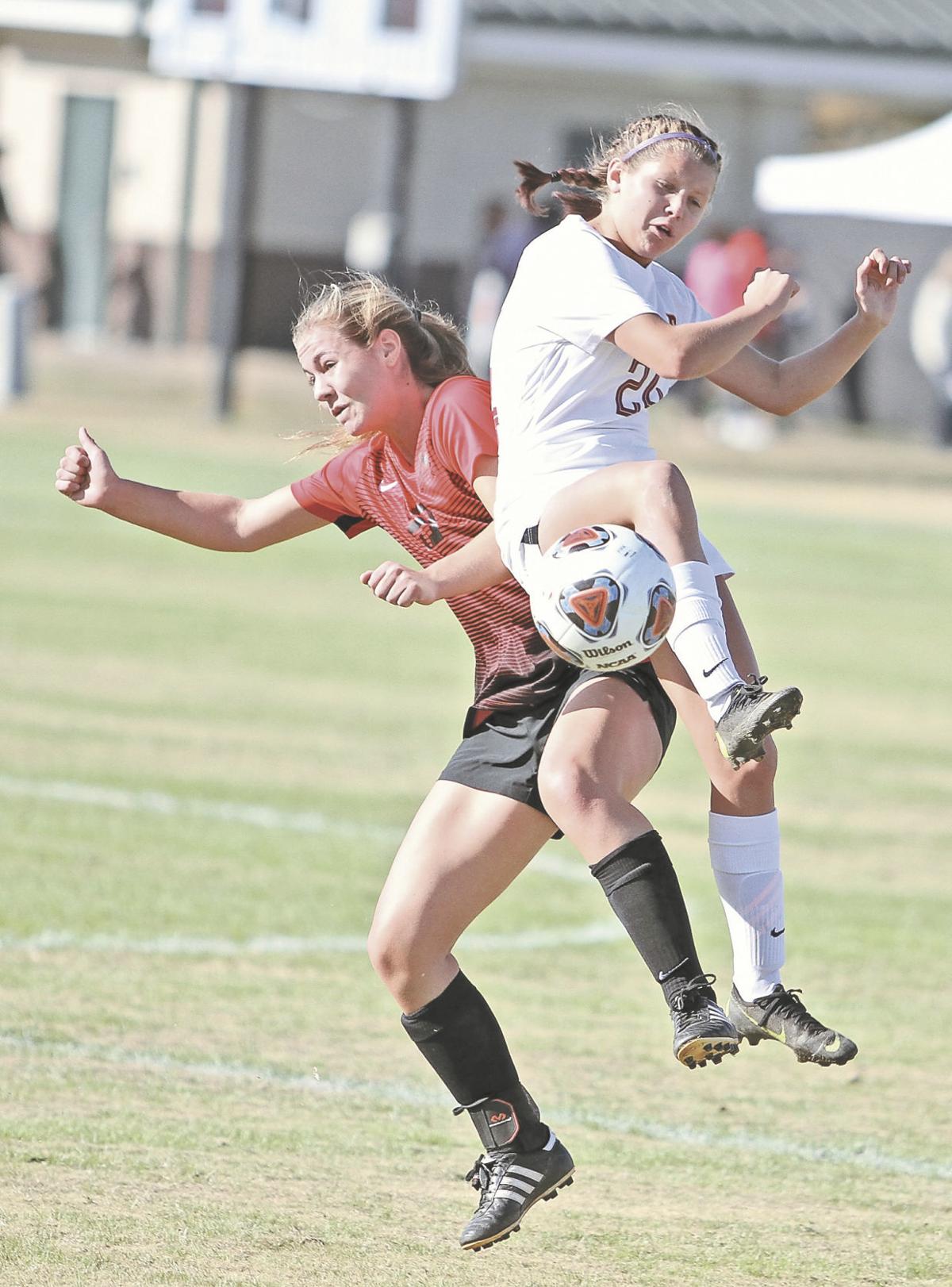 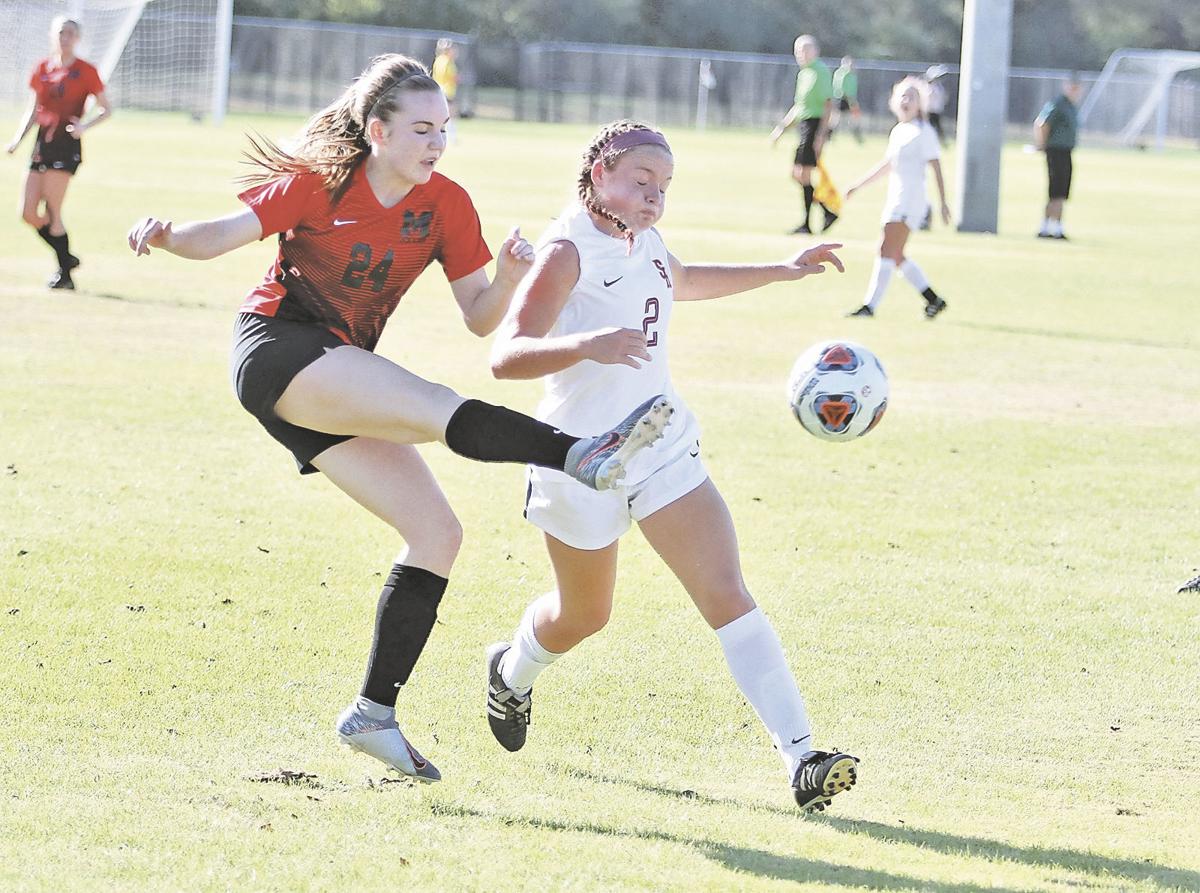 Maryville’s Ella Funderbunk kicks the ball past Science Hill’s Megan Burleson in Maryville’s 3-2 win in the first round of the TSSAA Class AAA state tournament. 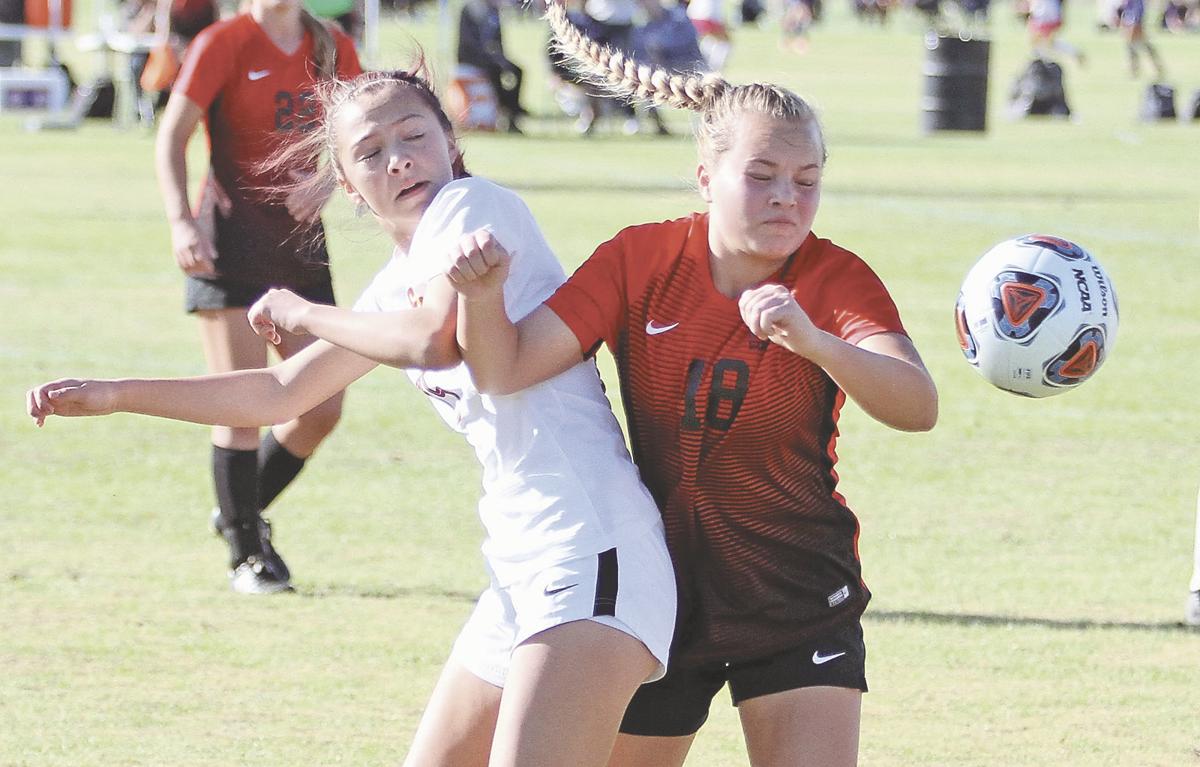 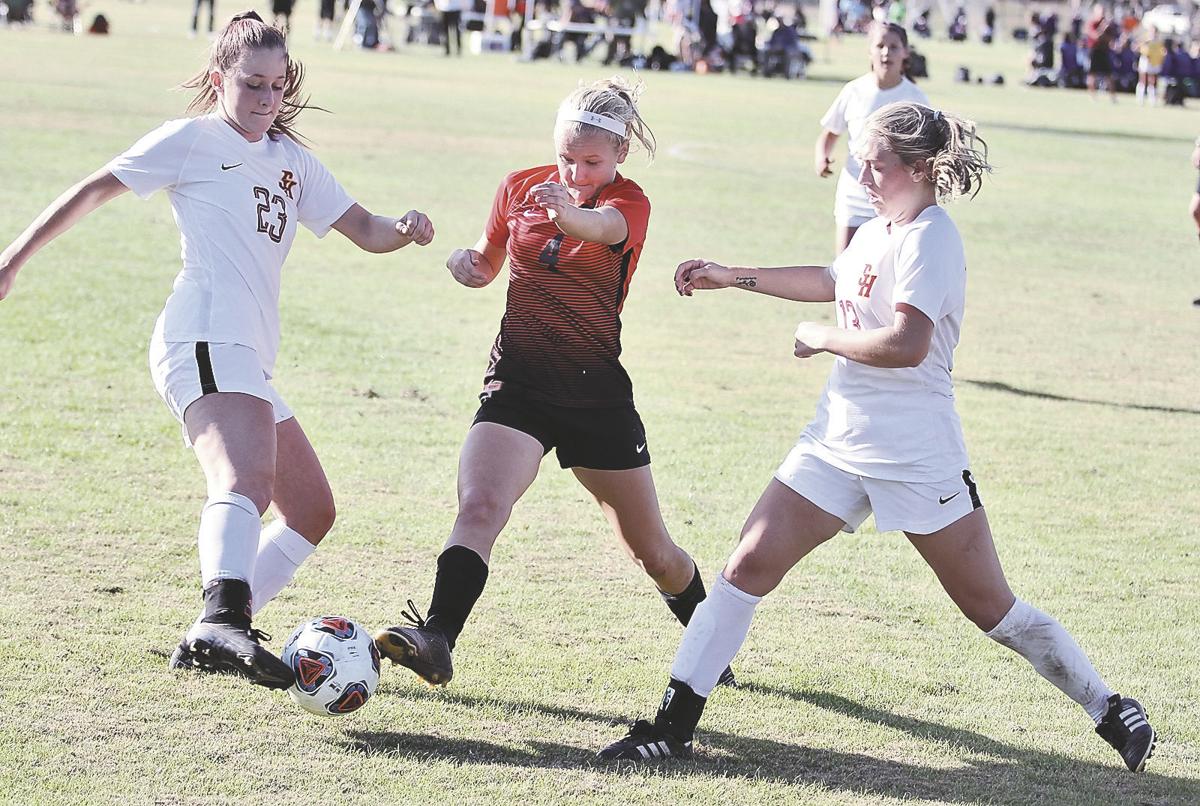 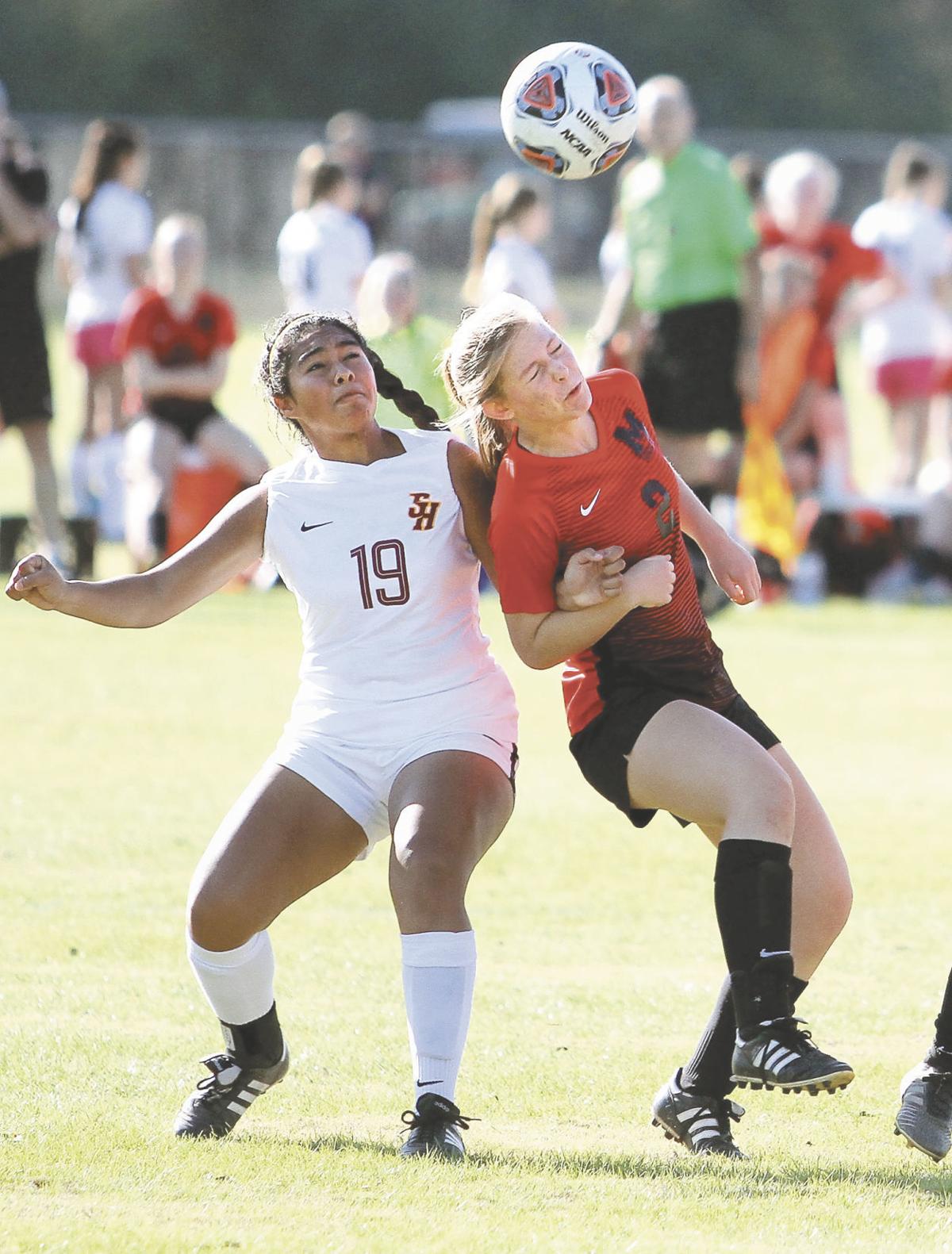 Maryville celebrates its 3-2 win over Science Hill Wednesday in the first round of the Class AAA state tournament.

Maryville’s Ella Funderbunk kicks the ball past Science Hill’s Megan Burleson in Maryville’s 3-2 win in the first round of the TSSAA Class AAA state tournament.

MURFREESBORO — Maryville conceded the first goal and the last goal, which is usually a good way to get eliminated.

Thanks to Reyna Coston and Kayla Barr, however, the Lady Rebels got all the goals they needed in between to ensure they would taste victory on the state’s biggest stage.

Coston’s brace and Barr’s winner on Wednesday afternoon gave Maryville a 3-2 victory over Science Hill in the quarterfinals of the Class AAA state tournament at the Siegel Soccer Complex.

Maryville has had great teams in its previous three trips here, but until Wednesday those teams had combined for one victory. Even Wednesday’s result wasn’t assured until the Lady Rebels saw out the final 10 minutes under heavy pressure following the Lady Toppers’ second goal.

Lady Rebels goalkeeper Grayson Patterson made five of her eight saves in the final 10 minutes.

“It’s hard enough to get here,” Maryville coach Steve Feather said. “Then to get down here and play an opponent like Science Hill that we knew was capable of having a surge, it’s really hard even win one game down here. Every opponent is good. Even when you feel like you’ve done your job putting it away anything can happen. The final 10 minutes it was about hanging on.”

Science Hill scored the opener in the 14th minute on a high shot by Paige Carlsen from outside the box. The Lady Toppers controlled the game up to that point before the Lady Rebels flipped the field. Even then, though, it looked like Maryville would trail at halftime.

Then Science Hill’s goalkeeper opened the door, and the Lady Rebels blasted it open.

Maryville’s Katie Cunningham hit a cross from the left side to the face of the goal. Madelyn Horne tried to punch it away, but the ball fell to Coston’s feet inside the 6-yard box. Coston hit a low shot through traffic that leveled the game less than one minute before the halftime whistle.

The psychology of scoring the equalizer before halftime was positive and changed the Lady Rebels’ outlook during the break.

“I knew Katie was going to send in a good ball, and I knew I had to come on the end of it to get us back into the game,” Coston said. “Then the second half was going to be ours.”

Coston wasn’t done. She scored the go-ahead goal five minutes into the second half on a penalty kick.

Coston drew the foul, too, after she posted up inside the penalty area on a throw-in. The Science Hill defender on her back used too much of her hands and body while trying to win the ball, and the referee immediately whistled for the penalty.

Coston calmly hit a right-footed shot into the top right corner to give the Lady Rebels the lead.

Barr doubled the lead five minutes later on a dazzling display of speed and athleticism. The freshman winger beat the right back to a ball about 35 yards from the net and sped by her into space. Barr cut back to the middle and set up a right-footed shot from 15 yards in the heart of the box that easily beat Horne.

Wednesday’s victory sets up a showdown with Brentwood, which is No. 4 in TopDrawerSoccer’s national rankings. The Lady Bruins’ top player is goalkeeper Kate Devine, who has been invited to the High School All-American game and is pledged to Vanderbilt.

It will be the Lady Rebels’ toughest test of the season, but they wouldn’t expect anything else at the latest stage of the season.

“A lot of it is about making sure they don’t stretch us out because they do a really good job with a possession-oriented game,” Feather said. “Also, it’s a similar message to the Science Hill game and realizing that just because a team is winning the possession battle doesn’t mean that they’re necessarily going to win the game.

“We’re going to defend hard. We’re going to get the ball to our playmakers. We love the opportunity to play the state’s top-ranked team.”