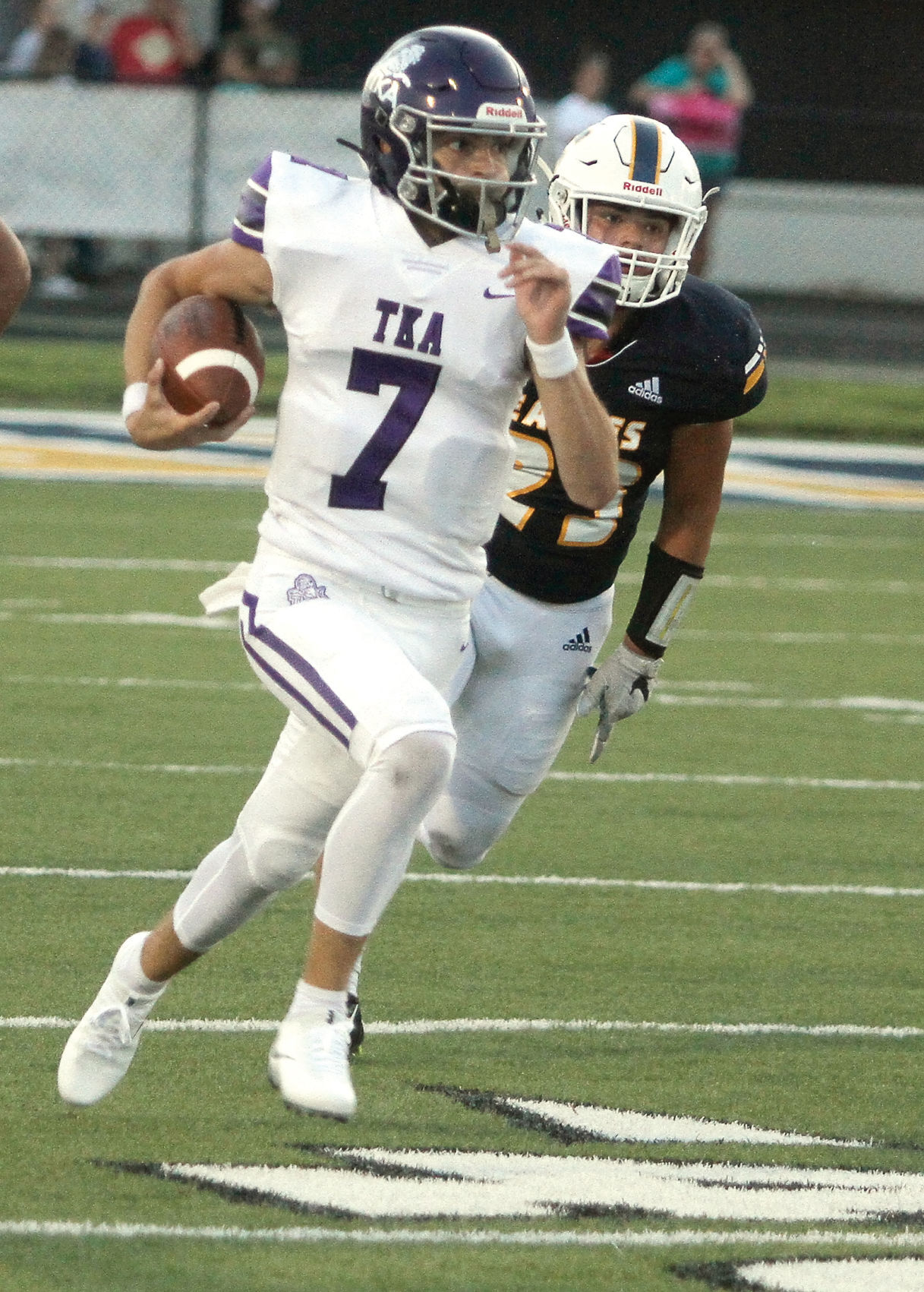 TKA’s Zak Acuff breaks free on a run while being chased by Seymour’s Riley Webber on Aug. 23. 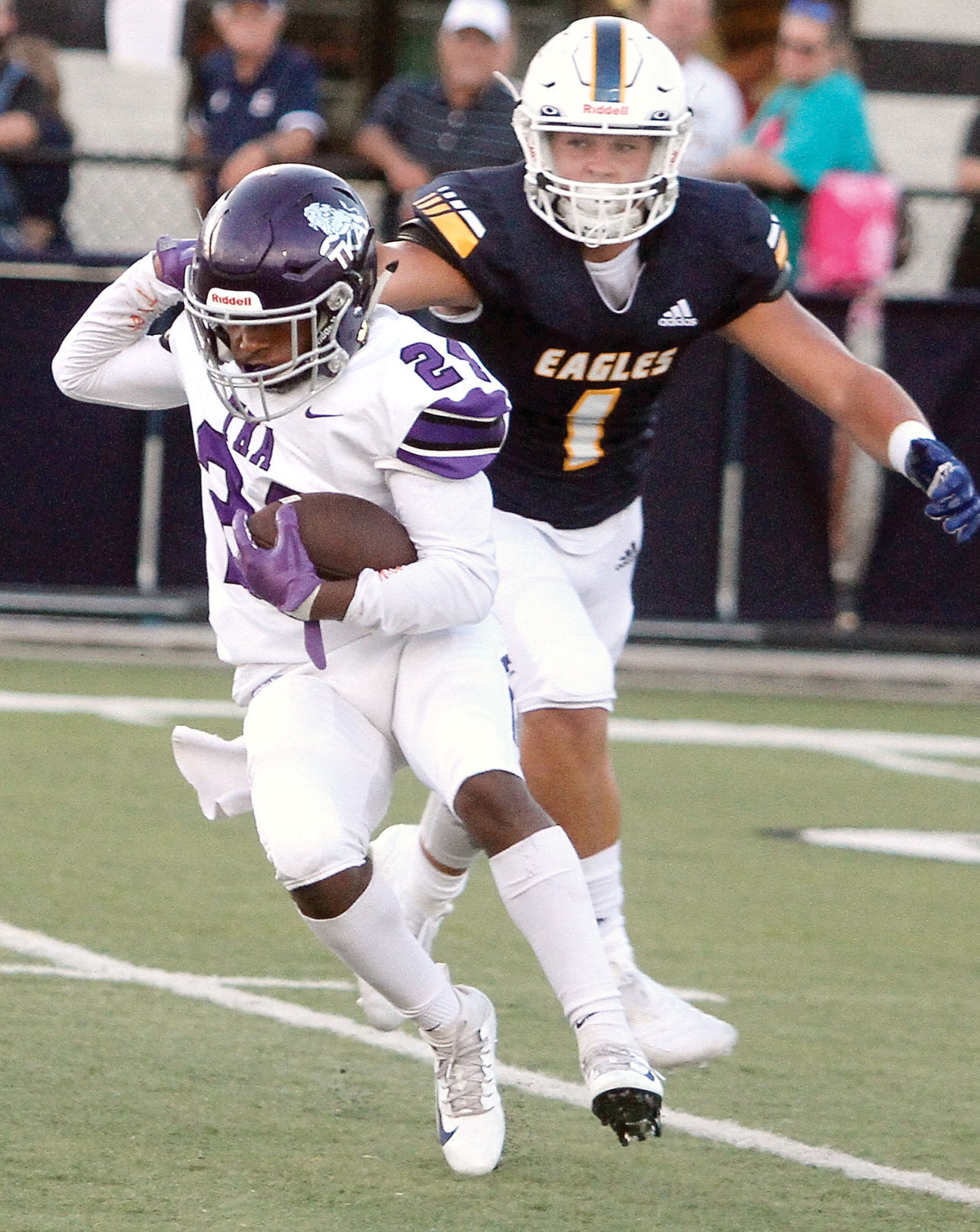 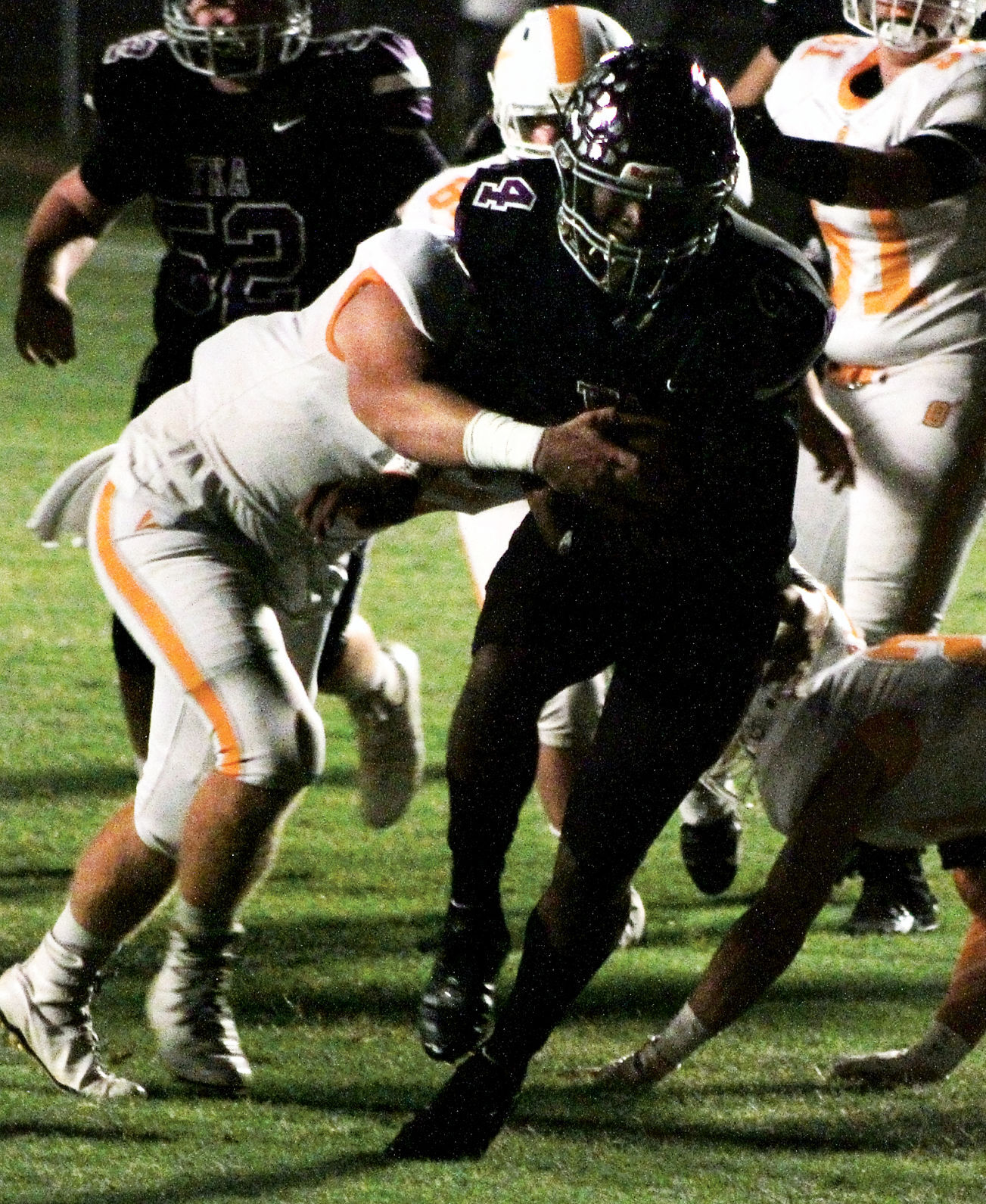 TKA’s Jachim Williams fights through the Oneida tackler on Oct. 11, 2019 in Seymour. 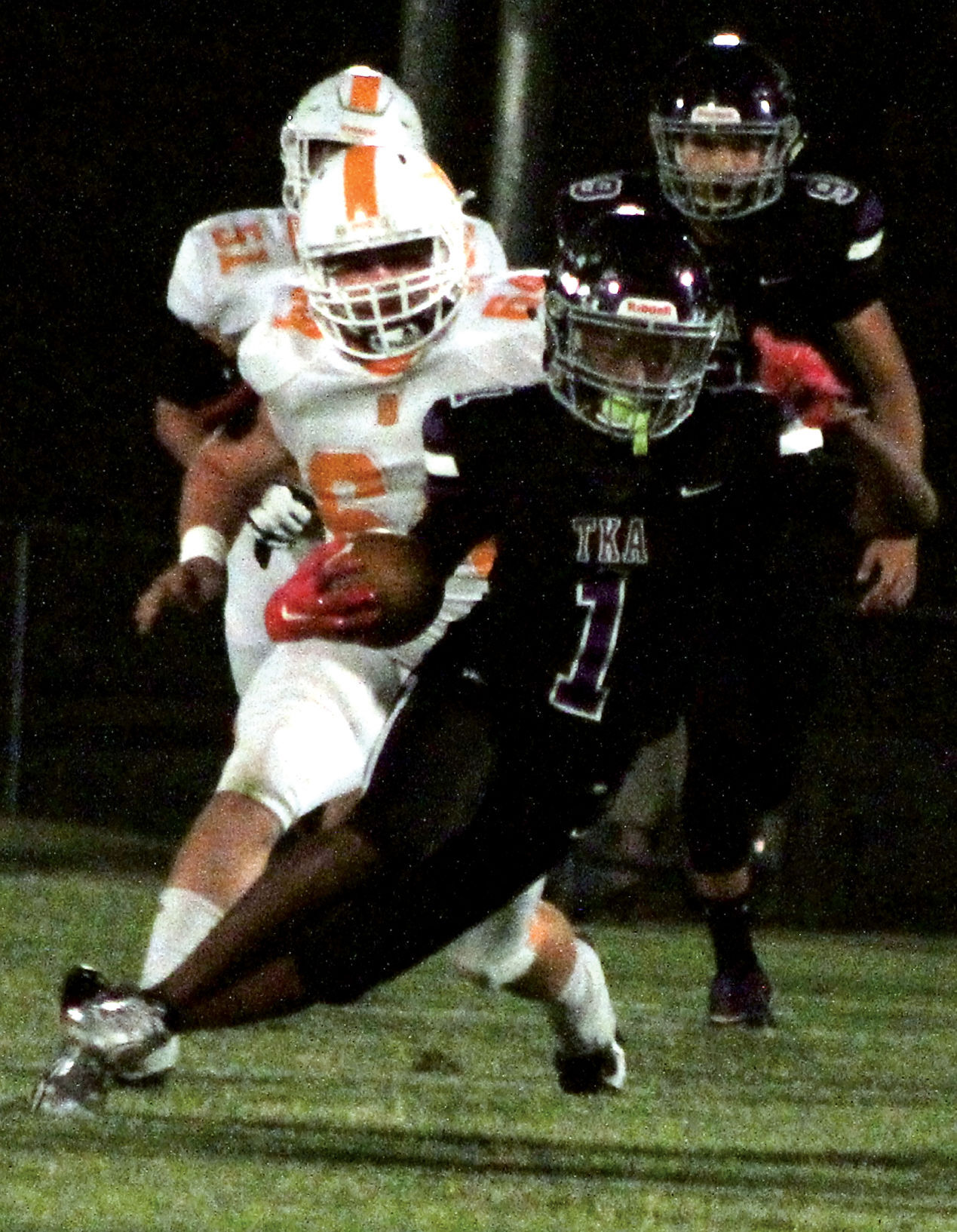 TKA’s Zak Acuff breaks free on a run while being chased by Seymour’s Riley Webber on Aug. 23.

TKA’s Jachim Williams fights through the Oneida tackler on Oct. 11, 2019 in Seymour.

TKA enters the 2020 season with a lot of pieces back from last season’s 6-5 team that went 6-1 against Division II-A East Region opponents, earning a first-round bye in the playoffs before falling to the University School of Jackson.

Talent returns at nearly every position as the Lions hope they can reach the Division II-A quarterfinals for the second consecutive season and potentially go further in the playoffs.

TKA can go as far as senior quarterback Zak Acuff will take them. The former Grace Christian quarterback impressed in his junior season by helping the Lion’s offense put up big numbers before missing just over three games with a collarbone injury.

He threw for 1,691 yards and 22 touchdowns in seven starts last season.

Nevertheless, Acuff feels 100%, something he could not say when he made his return during the playoffs, and he could be a contender for the Division II-A Mr. Football award if he stays on the field.

“It feels great,” Acuff said. “The injury really did put me back a little bit, but I’ve worked a lot harder and I’m even stronger than I was last year.”

“It’s definitely exciting,” TKA head coach Jonathan Sellers added about a full season with a healthy Acuff. “Probably the most exciting part is last year was year one for him in the offense. So, we’re hoping he’ll make great strides in learning the offense and going through progressions with Zak.”

Most of the Lion’s offensive line returns from a year ago, including one of the best offensive tackles in the area in Auburn commit J’Marion Gooch. The hopes for improved offensive line play mixed with the talent and development of junior running back Nakelin McAfee should lead to an improved ground game.

The Lions have to replace Zack Tilley, a go-to option for the offense a year ago after racking up 1,181 receiving yards and 13 touchdowns on 80 catches en route to being named a Division II-A Mr. Football semifinalist. TKA will look to do it with some new and old faces.

Senior Jachim Williams, who was TKA’s second-leading receiver a year ago with 559 yards and five touchdowns on 27 catches, is expected to start outside with Gibbs transfer Cly’tavious Barnes filling in for Tilley as the team’s new slot receiver.

Freshman Marshaun Bowers starred at cornerback as an eighth grader last season and he’ll see a big role at receiver as he plays on both sides of the ball.

“With me coming in and Cly’tavious Barnes, it’s going to be hard for them to guard both of us,” Bowers said. “With Jachim Williams on the outside with me as the other outside receiver, we’re going to be tough to guard.”

On the defensive side of the ball, the Lions will be tasked with answering the questions about their defensive line after losing a couple of starters from last year’s team.

Gooch plays both ways and will be a starter along the front this year with some young pieces in sophomore Josh Wade and freshman Garrett Cogdill.

Linebacker is one of the deepest units entering the season and it starts with outside linebacker Williams, the reigning region defensive player of the year.

“He’s a big physical kid,” Sellers said. “He’s really the leader of this group. Whenever he’s picking it up in practice everyone else follows suit. … Everybody feeds off of him.”

Returning contributors are abound around Williams as Luke Whaley, Jake Tipton, Riley Webber and Bradey Jeffers all started games a year ago. Junior Abdul-Malik Sholanke also flashed as a sophomore after returning from an injury that sidelined him at the beginning of the season.

Bowers is expected to be a true lockdown corner who takes away a side of the field, and safety Garrett Weekly is the leader of the defense.

“He’s one of our quarterbacks that stepped up and helped us a ton last year, but defensively he’s 100% the quarterback of the defense at safety who makes sure everyone is lined up correctly,” Sellers said.

All that talent leads to lofty expectations for a program that is just two years removed from an in-season coaching change.

In that time, the Lions have built a contender, and the best may come this season.

Freshman Marshaun Bowers proved himself as an eighth grader a year ago starting at corner. Now as a freshman the sky is the limit for Bowers who coaches believe will be a linchpin of TKA’s defense. Bowers will also have a chance to show his playmaking ability on the offensive side of the ball where he is expected to be a starting receiver.

Expectations are high for Gibbs transfer Cly’tavious Barnes before he’s ever played a game at TKA. While the Lion’s will replace Tilley with a handful of players, no one is expected to do more to fill the void than Barnes. Despite his short time at TKA, Barnes has impressed coaches and teammates alike with his athleticism and ability to make plays after the catch. “When he gets the ball, he’s just a freak,” Bowers said. “He gets yards that aren’t there and yards that we need. He’s super-fast, just like Tilley.”

The King's Academy has the difficult task of trying to replace the offensive production that Division II-A Mr. Football semifinalist Zack Tilley provided a year ago. “(He) broke every receiving record there was to break at this school," Sellers said. "He was a very dynamic kid. That’s going to be very tough to replace on offense.”

Friendship Christian was TKA’s only region loss a year and it came in lopsided fashion after Acuff exited the game with an injury. Revenge will be on Acuff and the Lion’s mind when they travel to Friendship for the week six showdown. The game will also prove as a good measuring stick to where TKA stacks up against the top of its classification.

63: In the three region games before Acuff suffered his collarbone injury, the Lions’ offense averaged 63 points, including a 77-point performance against Webb- Bell Buckle.

35: TKA went 6-2 against Division II-A opponents a year ago but the pair of losses came by an average of 35 points.

7: The Lions went 0-3 against the trio of local public schools, but losses to Seymour and Oneida were by seven points each.

LAST SEASON: The Lions went 6-1 in Division II-A East Region play, earning a first-round bye in the playoffs for the first time in program history. However, the season came to an end the following week with a loss to University School of Jackson.