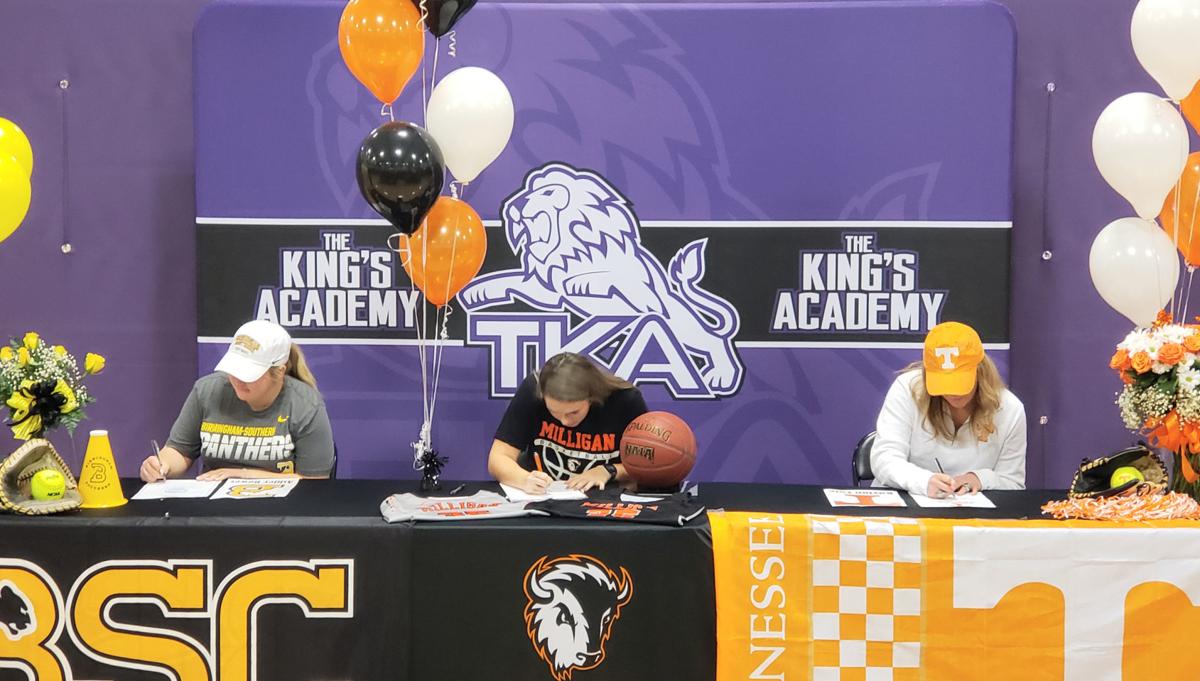 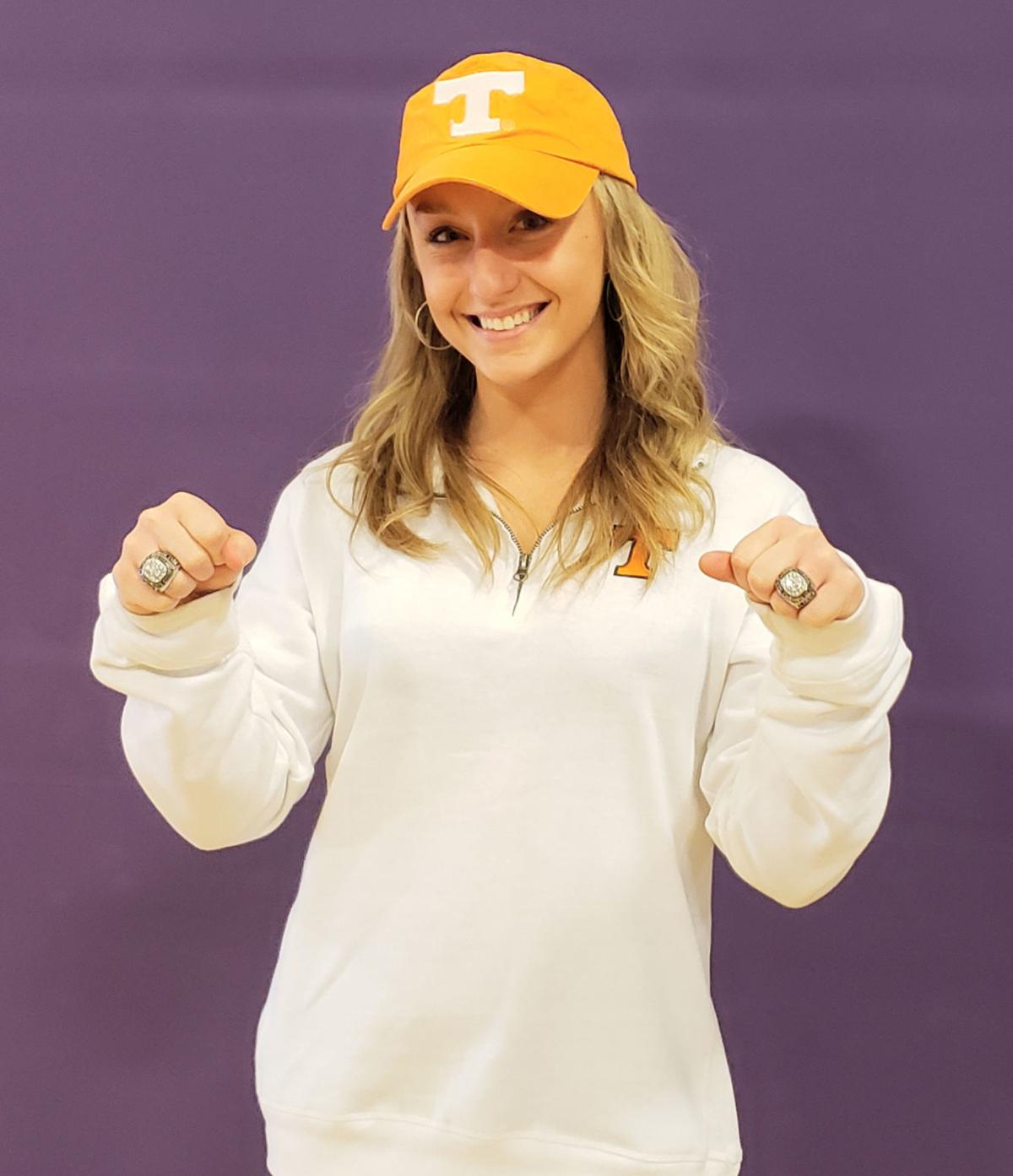 The King’s Academy senior Kaylan Cole shows off her two softball state championship rings after signing a National Letter of Intent to play for the University of Tennessee.

The King’s Academy senior Kaylan Cole shows off her two softball state championship rings after signing a National Letter of Intent to play for the University of Tennessee.

SEYMOUR — Kaylan Cole remembers being a little girl with big dreams that — based on where she grew up and still lives — don’t get realized as often as she said the area deserves.

Now that Cole has a platform to “bring an eye” to what her neighbors go through every day, she wants to do so in order to give other little girls and boys another reason to have their own dreams.

A senior at The King’s Academy, Cole drives an hour to school every day from her home in Cocke County — an area with a population of about 35,000 on East Tennessee’s border with North Carolina.

On Friday afternoon, Cole signed a National Letter of Intent to play softball for the University of Tennessee — something she has wanted ever since she was 8 years old and got a pink UT sticker to put on her glove.

Cole said her reality is unlike the norm for kids who grow up in Cocke County. According to official statistics provided by the United States Census Bureau, Cocke County has a poverty rate of 22.5%, which is the seventh highest rate for a county in the state. Opportunities for kids to play on travel teams are not as plentiful as they are in more prosperous areas.

The area suffered a vicious hit last month when it was announced Newport’s ConAgra facility — the lifeblood of the community — will close in January 2021. More than 350 people will lose their jobs.

“To be able to give little girls inspiration and tell them they can do what I’m doing means more to me than any ring, any trophy, any scholarship money,” said Cole, who has played a major role in TKA’s softball team winning two state titles in the last three years. “To see hope in a little girl’s or little boy’s eyes that they can make it somewhere and not have to stay in town and work there means more than you could ever know.”

Cole’s path to Tennessee began when she picked up a ball for the first time as a toddler, and the foundation of her love of the sport was laid by her father when he taught her how to play and coached her all the way until she was 10 years old.

By then, Cole was good enough to join a travel team. Her skills really improved after that. Eventually she met former TKA coach Marc Weekly and when she was old enough to play for the high school team she enrolled in classes at the Seymour school.

Guided by the fiery coaching style of Weekly, who left TKA after last season and is currently in his second stint as a volunteer assistant coach for Tennessee, Cole develop strength and determination she never knew she had.

That characteristic is a big reason why she fought through a right bicep strain during the state tournament last season and returned to the circle for the championship game against Chattanooga Christian.

In the winner-take-all finale, Cole pitched a six-hitter and earned the win in the Lady Lions’ 3-1 victory.

“I call her my spirit animal,” said new TKA head coach Dayna Carter, who last season was an assistant under Weekly. “She’s gritty. She will do whatever it takes. She is an unbelievable team player. She has so much grit and fire to her that she gets me fired up.”

This spring will be Cole’s last in the circle. Tennessee will deploy her as a utility player — most likely as an outfielder because of her elite speed and softball IQ. Cole had scholarship offers from other SEC schools, but once she attended her first Lady Vols game as a kid and imagined herself on the field at Sherri Parker Lee Stadium, Tennessee always was going to be her No. 1 choice.

Beginning next season, that dream of wearing orange and white and playing on one of college softball’s biggest stages finally will come true. She’ll be close enough to home that maybe another little girl from Cocke County will get to see her play in person.

And maybe that little girl will be inspired by Cole chasing down a fly ball in the gap and want to one day be like Cole.

“Not only that, but I think if we had more people looking at the talent we have there we would have a lot better success rate. We have so much talent in Cocke County that nobody ever puts an eye to — from athletes to arts, anything. It’s a poor county and people don’t want to put attention to it. Growing up there I’ve always wanted people to see my county like I see it. It’s a place of great things.”