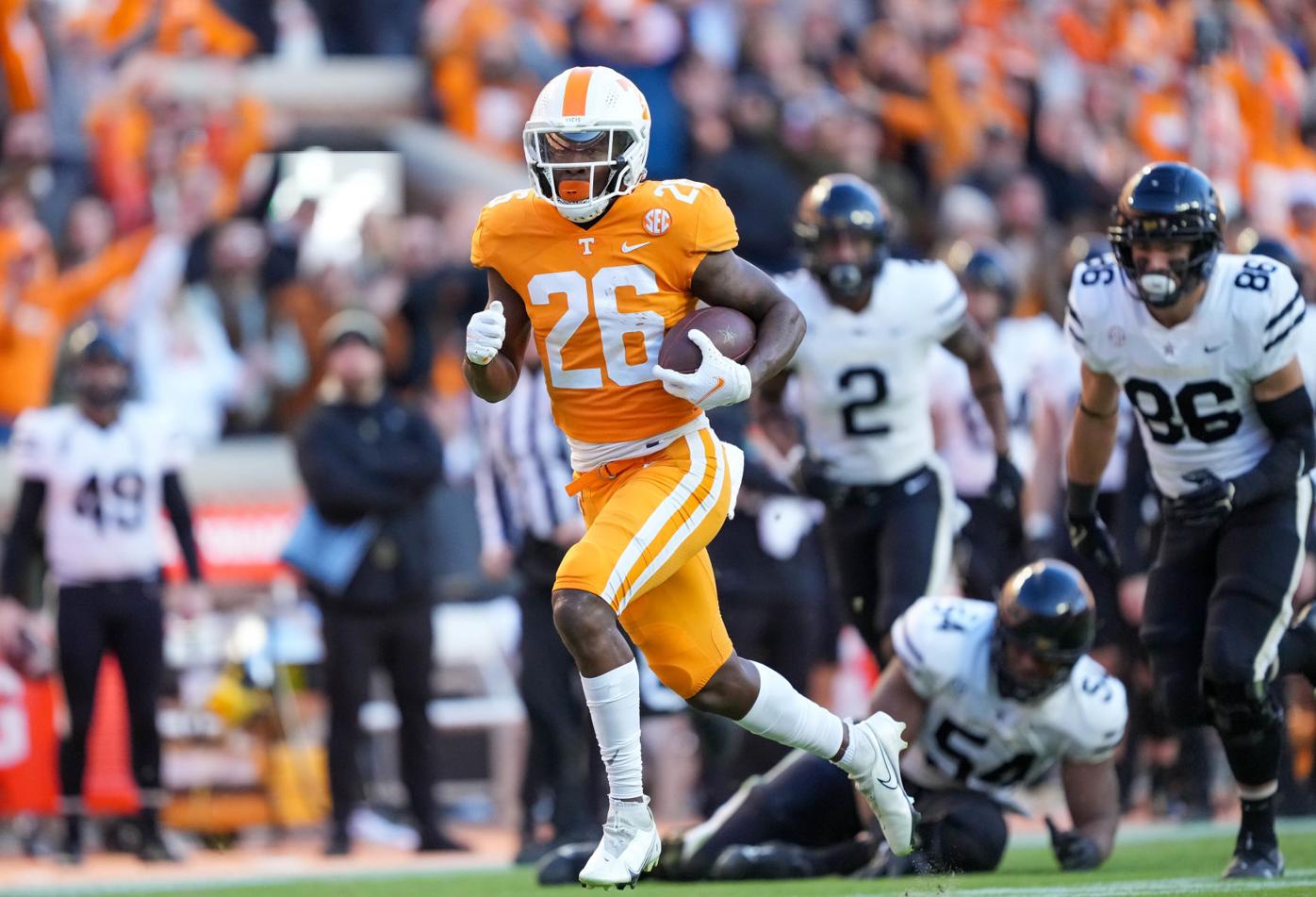 Theo Jackson races toward the end zone after a first-quarter interception in the Vols’ 45-21 victory over Vanderbilt on Saturday inside Neyland Stadium. 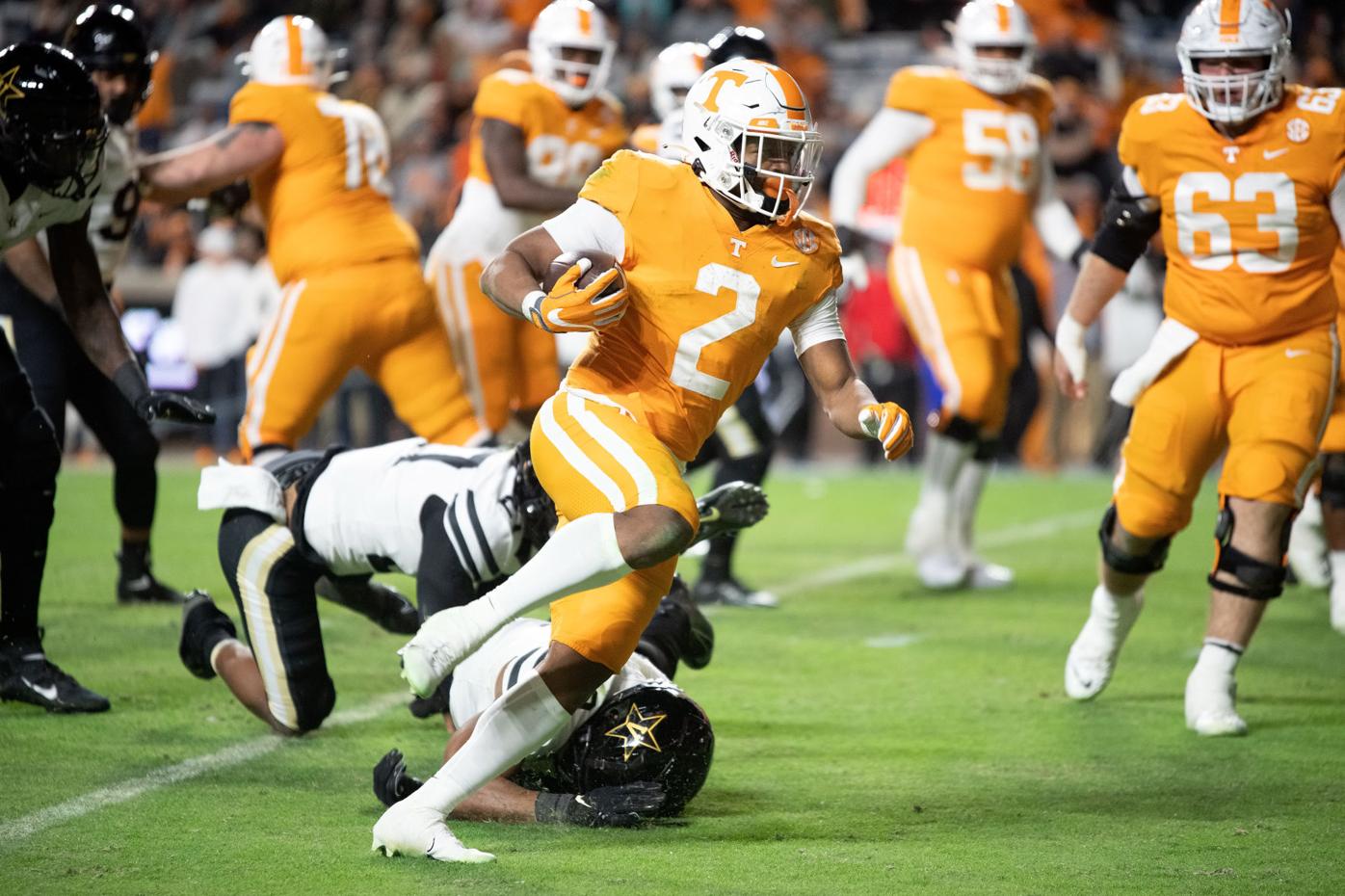 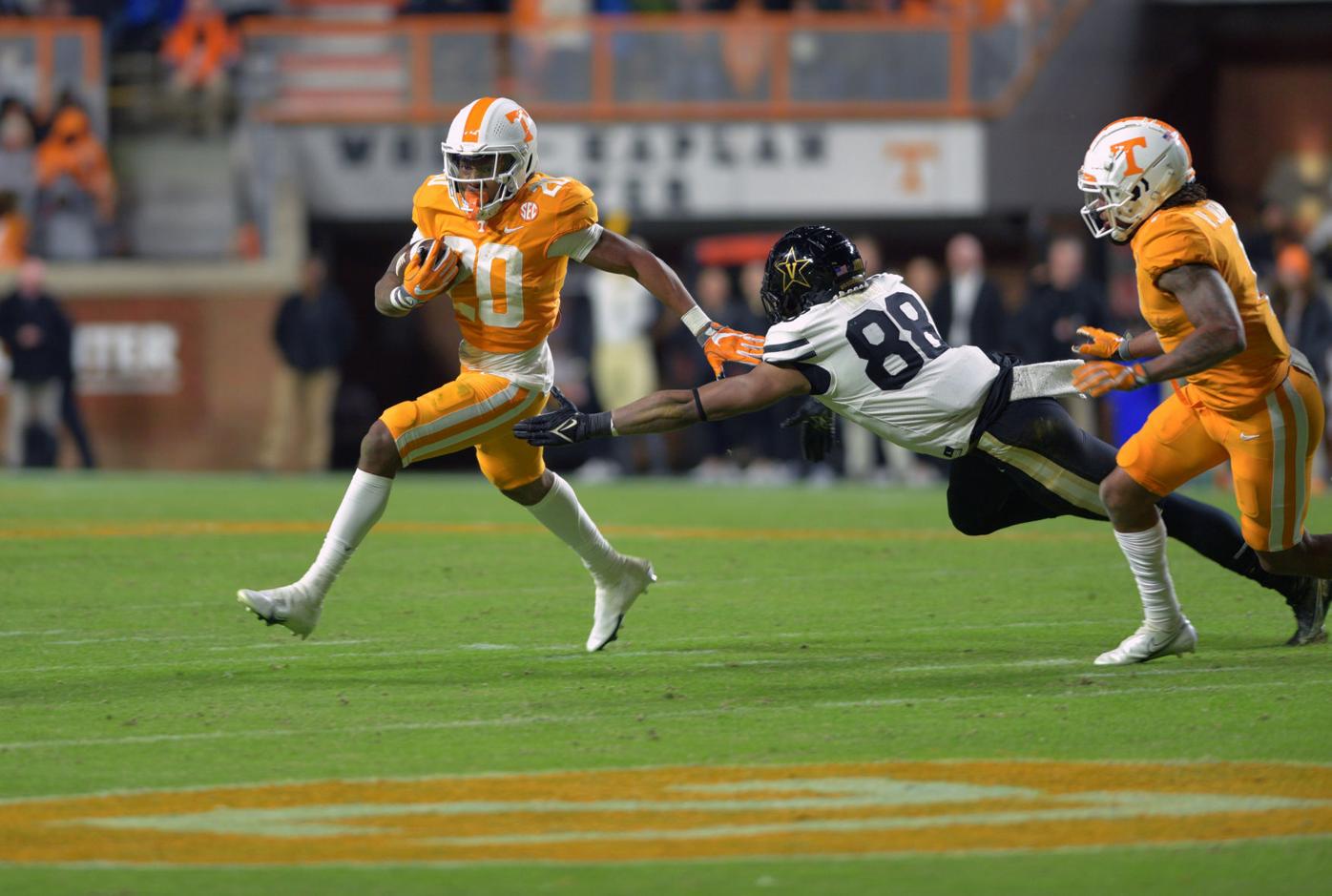 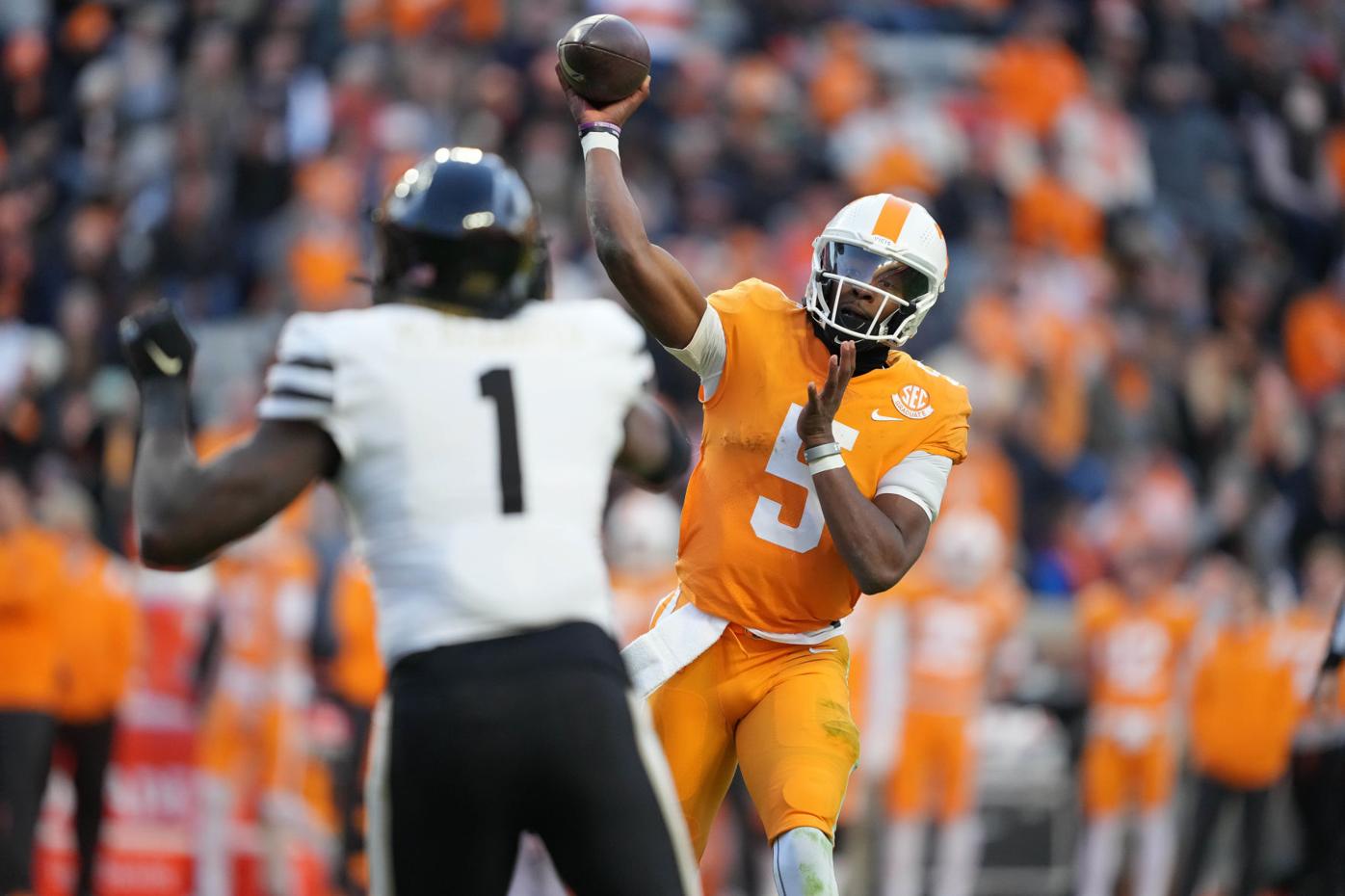 Hendon Hooke throws a pass over Vanderbilt linebacker Elijah McAllister during the first half of Tennessee's 45-21 win Saturday.

Theo Jackson races toward the end zone after a first-quarter interception in the Vols’ 45-21 victory over Vanderbilt on Saturday inside Neyland Stadium.

Hendon Hooke throws a pass over Vanderbilt linebacker Elijah McAllister during the first half of Tennessee's 45-21 win Saturday.

Jackson was in the vicinity of the throw but didn’t make a jump on it. After Martinez pointed out his mistake, Wright gave him a chance to make up for it, this time on the other side of the field.

Abdur-Rahman was again the target, but before the ball got to him, Jackson stepped in front of it and raced 56 yards to the end zone, untouched, to put the Vols up early and lead the way for a 45-21 blowout win over the Commodores at Neyland Stadium on Saturday.

“The play prior to that, (Wright) threw the same exact ball and Coach Martinez got onto me about getting out there fast enough,” Jackson said. “Once I had seen them throw the ball to the other side, I knew I had to jump it. The only thing I saw in front of me was green, so I had to score. That was really the mindset after (making the interception), just scoring.”

Tennessee’s staple has been its offense scoring on its first opportunity and kickstarting the team’s performance over the course of four quarters, but on an afternoon where the Vols (7-5, 4-4 SEC) were shutout offensively in the opening quarter for the first time all season, Jackson’s play was the unlikely catalyst.

“I thought defensively, we started super fast,” Heupel said. “We got a pick six by Theo. A great play by him. ... I thought the defense played stifling, suffocating defense the entire first half.”

Jackson entered Saturday with 73 tackles and 11 pass breakups from the safety position, but had yet to come up with an interception. It was only appropriate that it finally came on Senior Day.

As soon as he crossed the goal line, he looked up into the stands where his family was sitting.

“Once I cleared everybody, I was looking straight at (my family),” Jackson said. “That was really like the best feeling that I could ever have, you know, scoring a touchdown right there in front of my family. I had everybody here (to watch the game), so that made it even better.”

His interception return for a score was the team’s third this season, the most in a single season since the Vols recorded four takeaways for touchdowns in 2013.

Small, Wright headlines run game: Even before leading rusher Tiyon Evans announced his entrance into the transfer portal on Friday, injuries hindered him for much of the second half of the season.

Because of that, Jabari Small has taken a bulk of the carries out of Tennessee’s backfield. Against Vanderbilt (2-10, 0-8 SEC), he racked up 104 yards on 15 carries and two touchdowns.

The Memphis native who suffered a shoulder injury that sidelined him earlier in the season is now up to 612 yards and eight scores on the season.

“It’s been tough (playing through injury),” Small said. “My teammates, like Cedric (Tillman), my coaches, my dad, my mom ... they’ve been so supportive and keeping grounded through it. I just want to be there for my teammates. I’m just trying to be there when I’m needed.”

Small didn’t have to worry about being the lone workhorse in Tennessee’s run game versus the Commodores. Freshman Jaylen Wright also had 15 carries and finished with 113 yards and a touchdown.

“It’s been great to see (Wright) mature each game,” Small said. “The coaches have done a great job of just developing him and teaching him the ins and outs. ... He’s just getting better with each snap and each carry, so it’s just been fun to watch him.”

Hooker didn’t take part in the pregame Senior Day festivities before he went 10-of-18 passing for 156 yards and a pair of touchdowns, but that doesn’t mean he’s made up his mind on what to do next.

Hooker is on pace to finish with the highest passing rate in program history. He has been responsible for 2,567 yards and 26 touchdowns and his return could go a long way in the Vols’ program taking an even bigger step in 2022.

His teammates are making the pitch.

“This is just the first year, imagine what we could do the second year,” Small said. “There’s a lot of new things, a lot of adversity we had to overcome. For him to perform how he did, just staying so poised and being a leader. The sky’s the limit for him.”