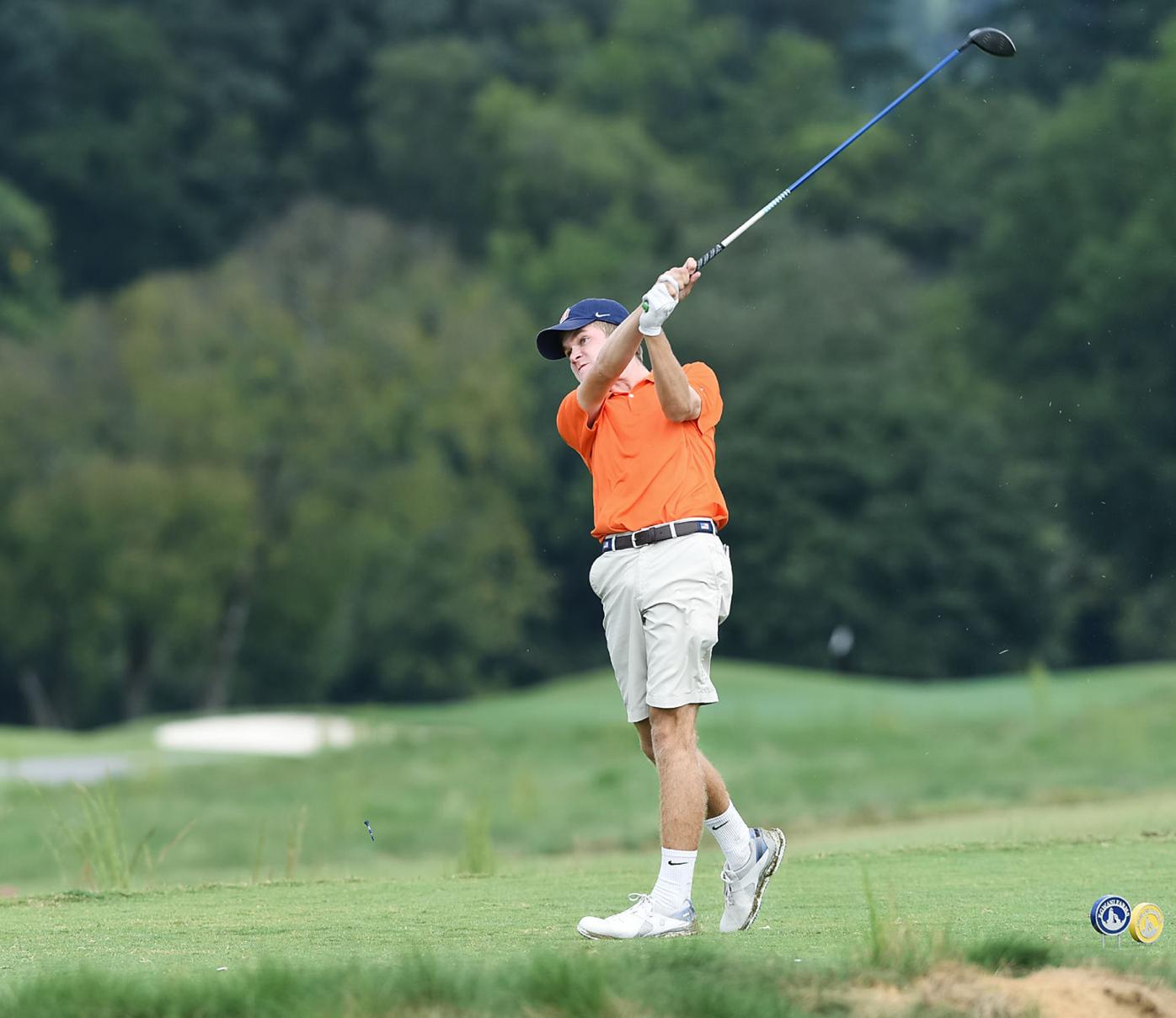 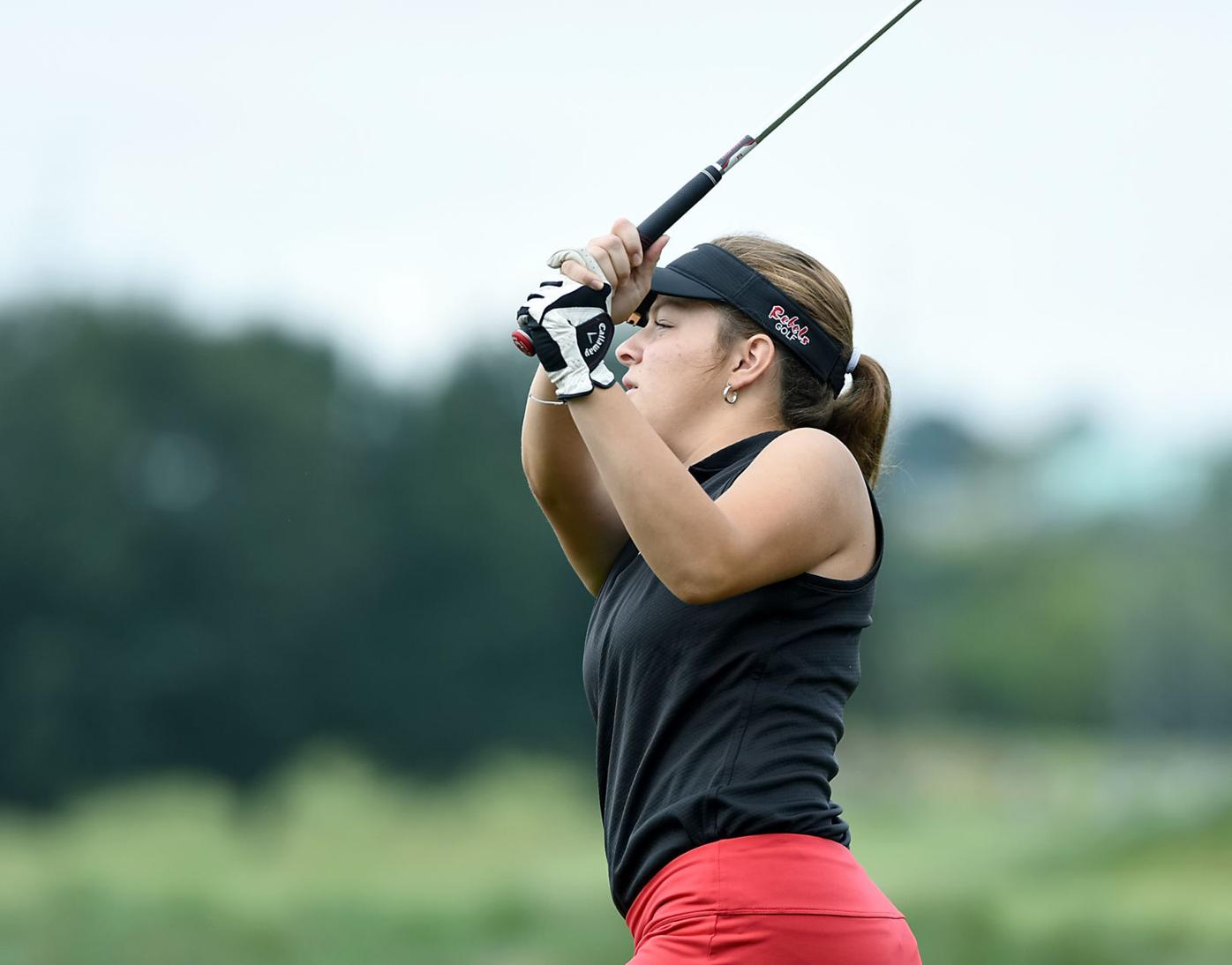 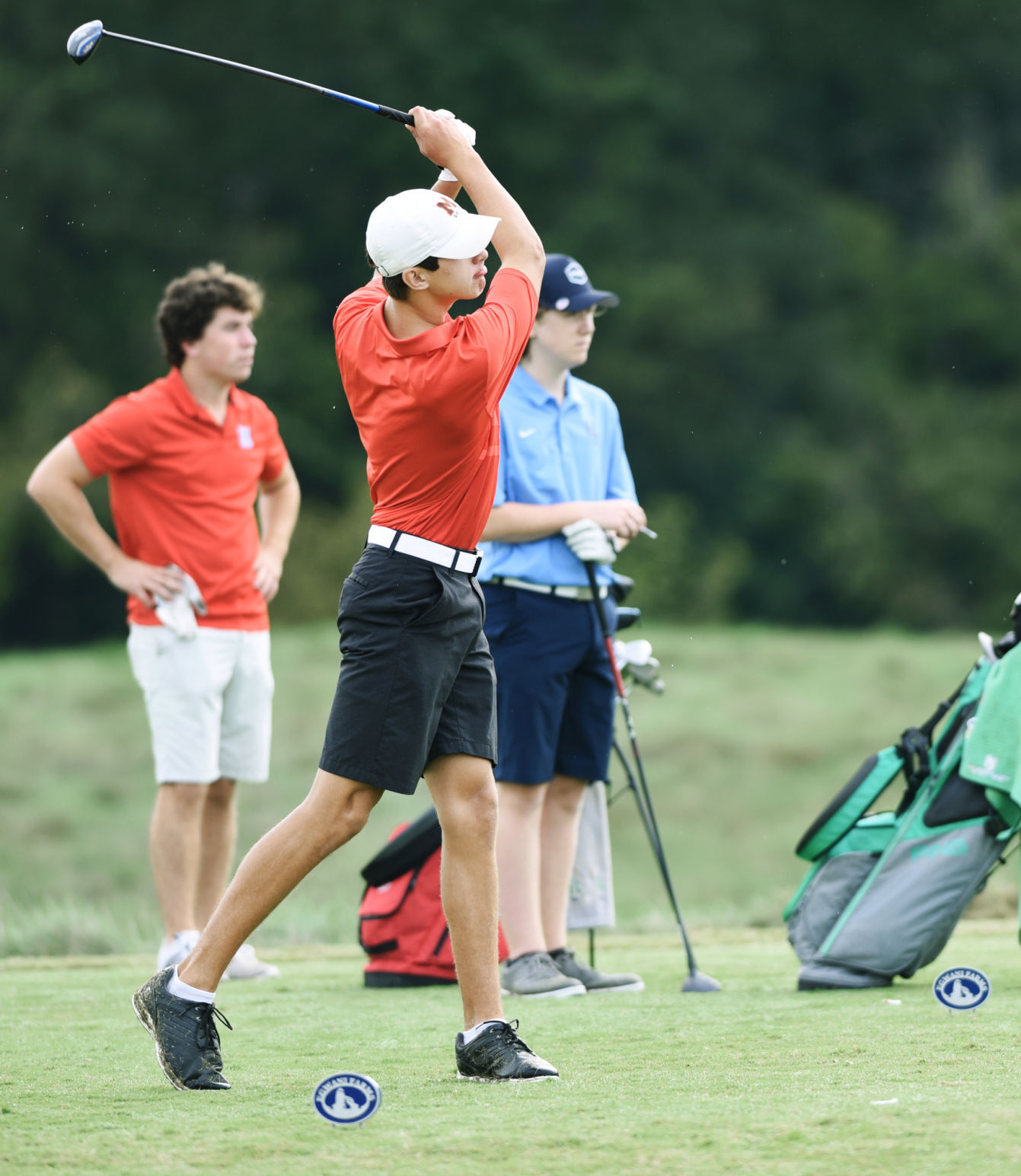 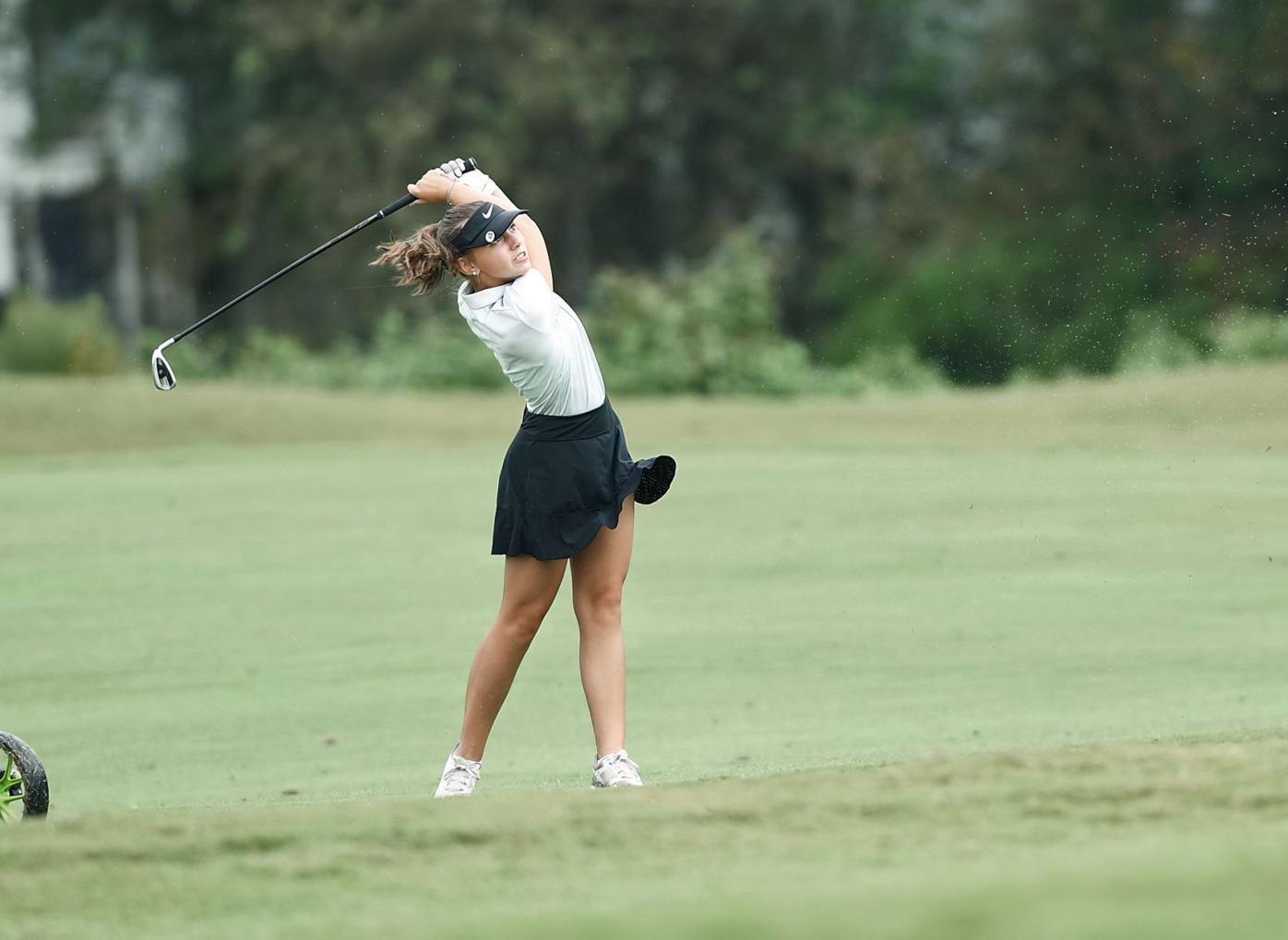 Heritage's Hannah Smelcer hits her second shot to the green on the 13th hole at Egwani Farms Golf Course on Wednesday morning in the District 4-AAA TSSAA golf tournament. 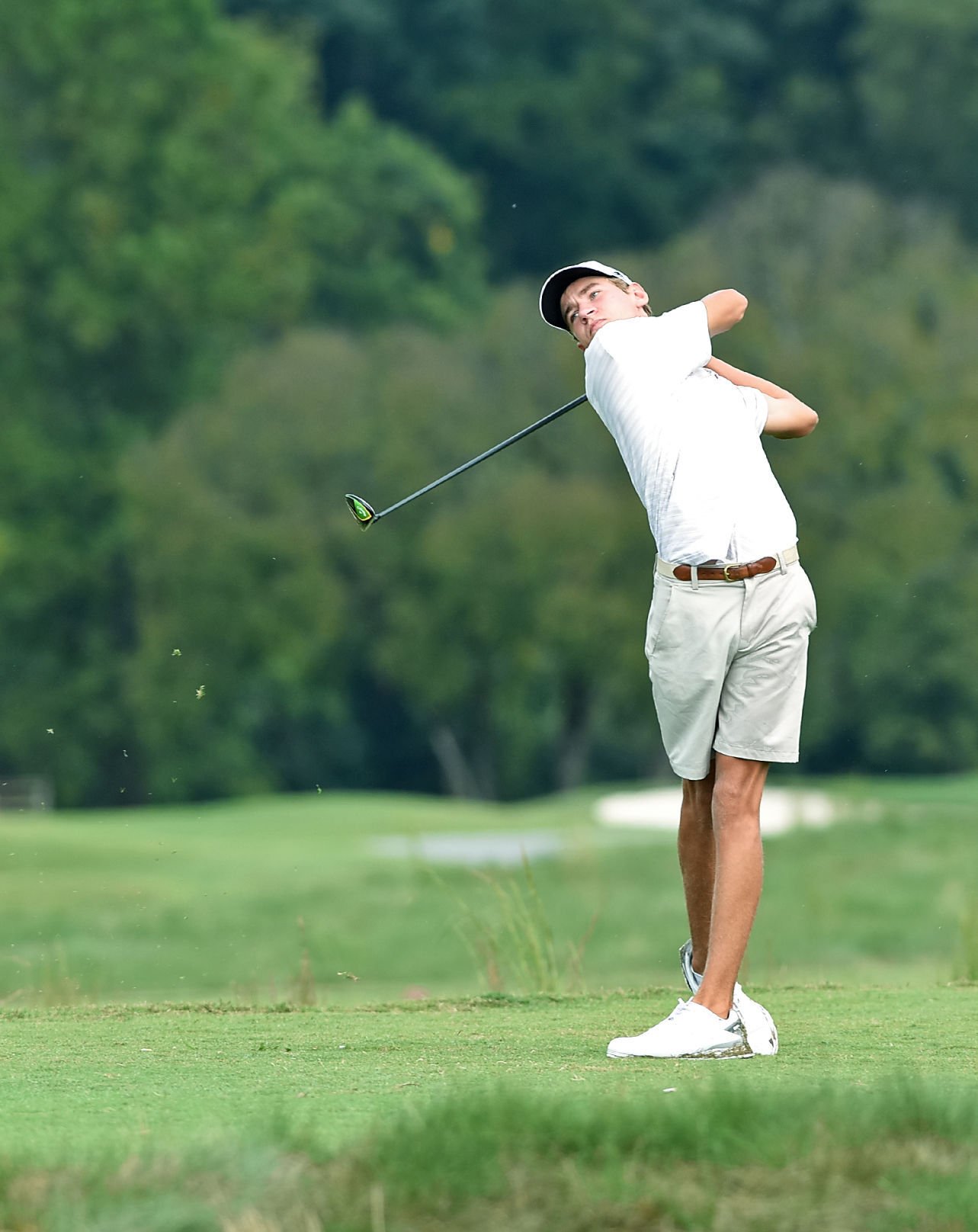 Heritage's Hannah Smelcer hits her second shot to the green on the 13th hole at Egwani Farms Golf Course on Wednesday morning in the District 4-AAA TSSAA golf tournament.

Nothing was a given in Wednesday’s District 4-AAA golf tournament at Egwani Farms Golf Course.

With plenty of parity in competition among the top six boys teams, both Maryville and Heritage wound up in a battle with West for a spot among the top three squads — with a region tournament berth on the line.

Strong finishes by the William Blount and Maryville boys propelled them to second and third-place finishes, respectively, behind defending district champion Farragut, which won with a team score of 300. The Rebels knocked off West in a playoff to secure the final qualifying position.

“I think this was our best showing of the year,” Maryville coach Mike Driver said. “The competition has been good for us all year long, so I’m very proud of our kids today.”

On the girls’ side, Maryville (169) edged Heritage (170) by one stroke to finish third and round out the qualifying teams. Farragut (143) and Bearden (163) placed ahead of the Lady Rebels.

William Blount’s Julia Kessler and Anna Lewis as well as Heritage’s Hannah Smelcer also qualified as individuals, with the top five not already on an advancing team earning region berths. The region tournament is slated for Sept. 28 at WindRiver Golf Club in Lenoir City.

William Blount coach Michael Bradshaw said the William Blount boys’ goal was to place among the top three in the district, but they had their sights set on taking second for the second straight year.

That appeared to be put in jeopardy after West’s Carson Kammann kicked off the day with a 6-under-64 to place first. William Blount’s top golfer, Nick Etherton, tied for second with Farragut’s Lance Simpson with a 71.

The Govs trailed West by four at the turn before finding their groove to beat West by 10 strokes despite Kammann’s impressive performance.

“The back nine was our best nine holes of the year,” Bradshaw said. “That’s as good as we could hope for. They performed when the pressure was there, and I’m just super proud of them.”

William Blount’s team score was also bolstered by its No. 3 golfer Tyler Graves, who shot a 76 in what Bradshaw considered his best performance of the season. Also scoring for the Govs were Isaiah Jones (78) and Riley Forester (85).

Etherton got off to a less than ideal start with a bogey on the first hole, but he didn’t let it rattle him. He responded with a pair of birdies on holes two and 17 and parred everything else.

“I didn’t really worry about it — if you start freaking out about one hole, especially at the beginning, then you’re in trouble,” Etherton said. “I played OK all day, just never really got anything going. Carson just kind of ripped the golf course to pieces. … When people start doing that, you just have to sit back and say, ‘Today’s your day — good job.’”

Both the Maryville girls and boys narrowly placed third, marking the first time in three years both Maryville teams have advanced.

For the boys, Driver said he thought the Rebels could place anywhere from third to sixth, with West, Lenoir City (331) and Bearden (337) all in the mix.

In the playoff, five golfers for each team played a hole and the four best scores were counted. Maryville won it with two birdies and two pars (18) while West had four pars (20).

Unlike the Maryville boys, the Lady Rebels advanced to the region tourney last season, but they did so behind their top golfers Ainsley Simms and Bevin Harrill. Simms and Harrill both graduated and went onto play at the next level — with Simms at Tennessee Tech and Harrill at Tennessee Wesleyan — but Maryville found a way to get it done again.

Parker Miller led the Lady Rebels with a 79 to tie for fourth with Heritage’s Smelcer while Madison Atchley shot 90.

“I’m really happy for our girls because losing your two top players to graduation and then still getting back to region is something really positive,” Driver said. “We’ve got some good girls’ golf in Blount County.”

Kessler (86) and Lewis (89) will represent the William Blount girls, and Smelcer will represent Heritage in the region tourney. Heritage’s Victoria Holder nearly qualified with a 91 before falling to West’s Riley Phillips in a playoff to decide who would take the fifth individual spot.

On the bright side, Heritage coach Scott Williams expects all three golfers for the girls to be back next year.

“Hannah Smelcer played really well, so I’m really proud of her,” Williams said. “She was just solid all day like she normally is. … If we continue to get better, we should be fine next year.”