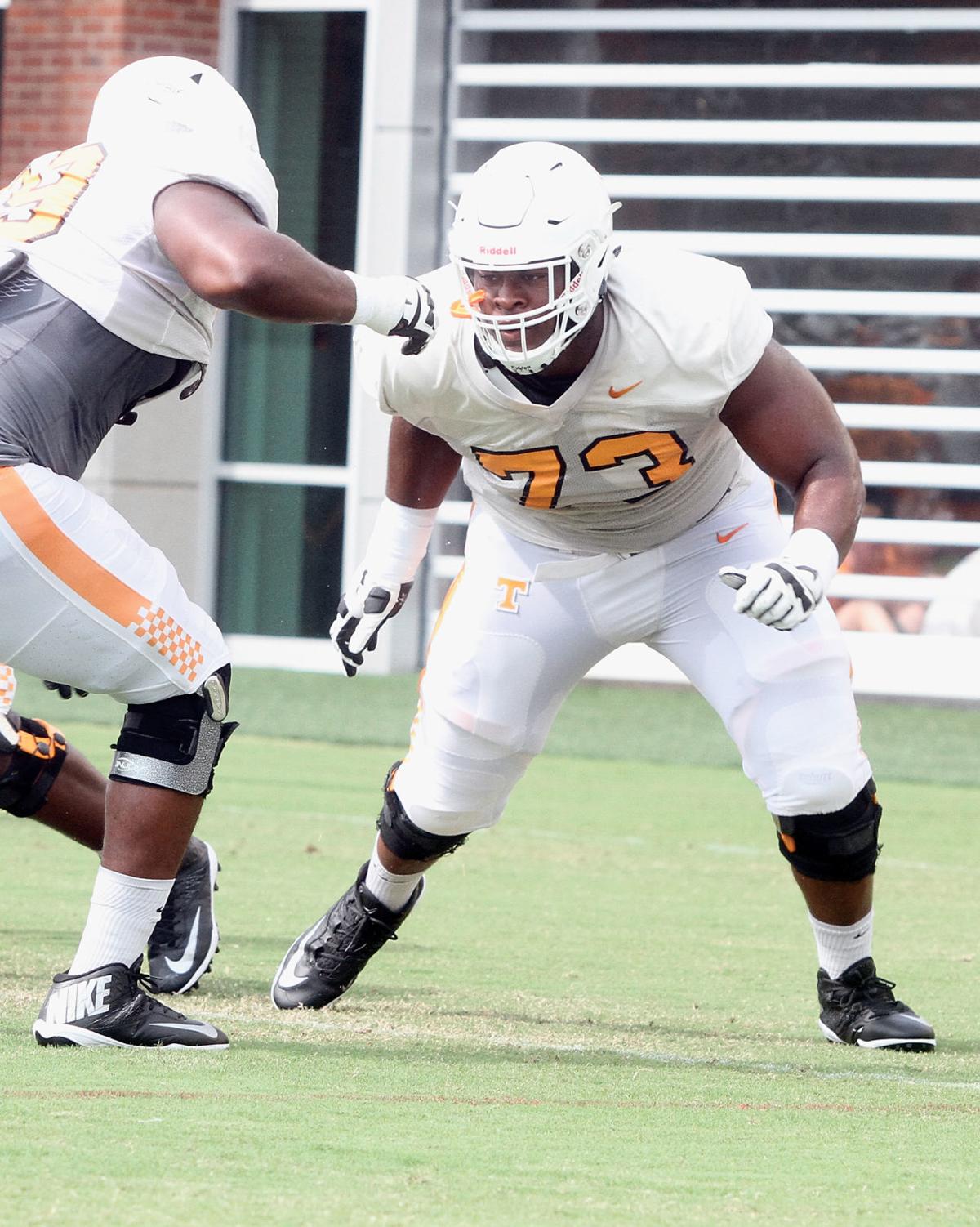 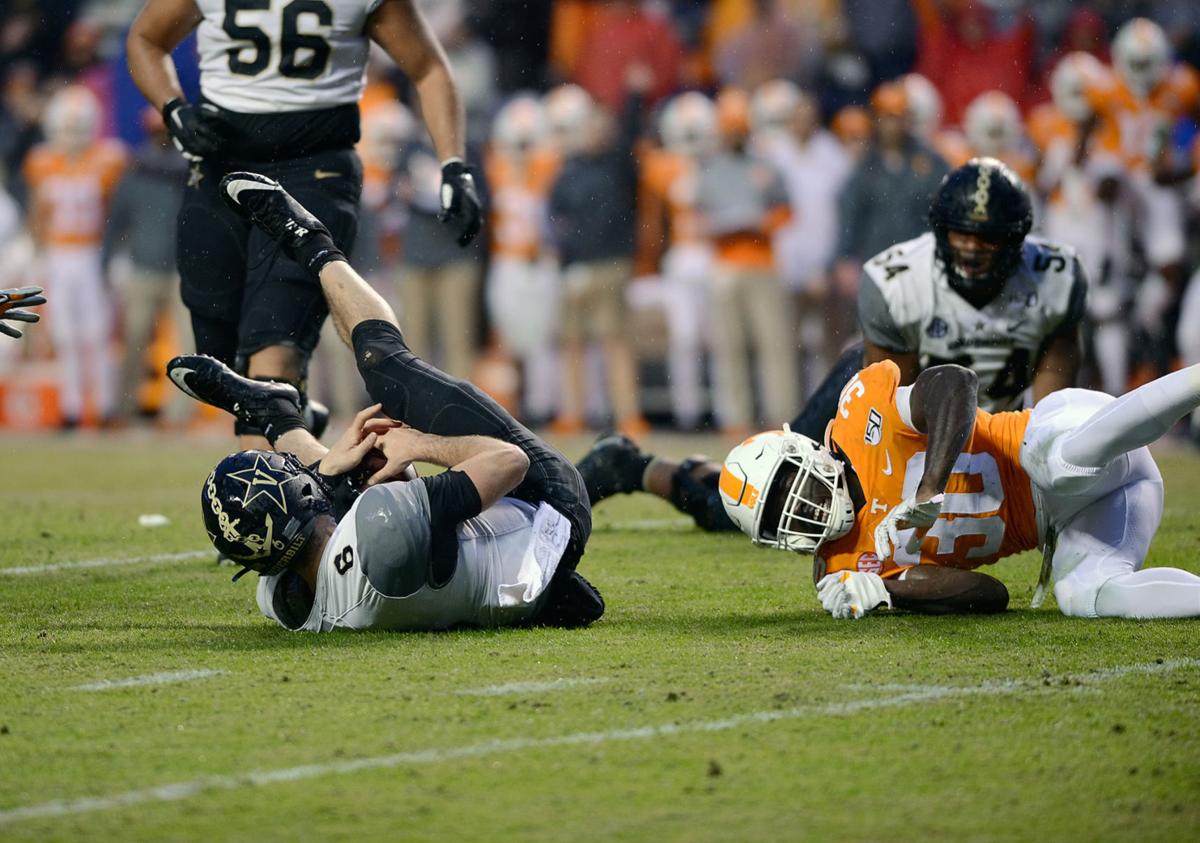 Roman Harrison (30) looks to see Vanderbilt QB Riley Neal (6) go down after Harrison made the diving sack in Saturday’s game at Neyland Stadium. 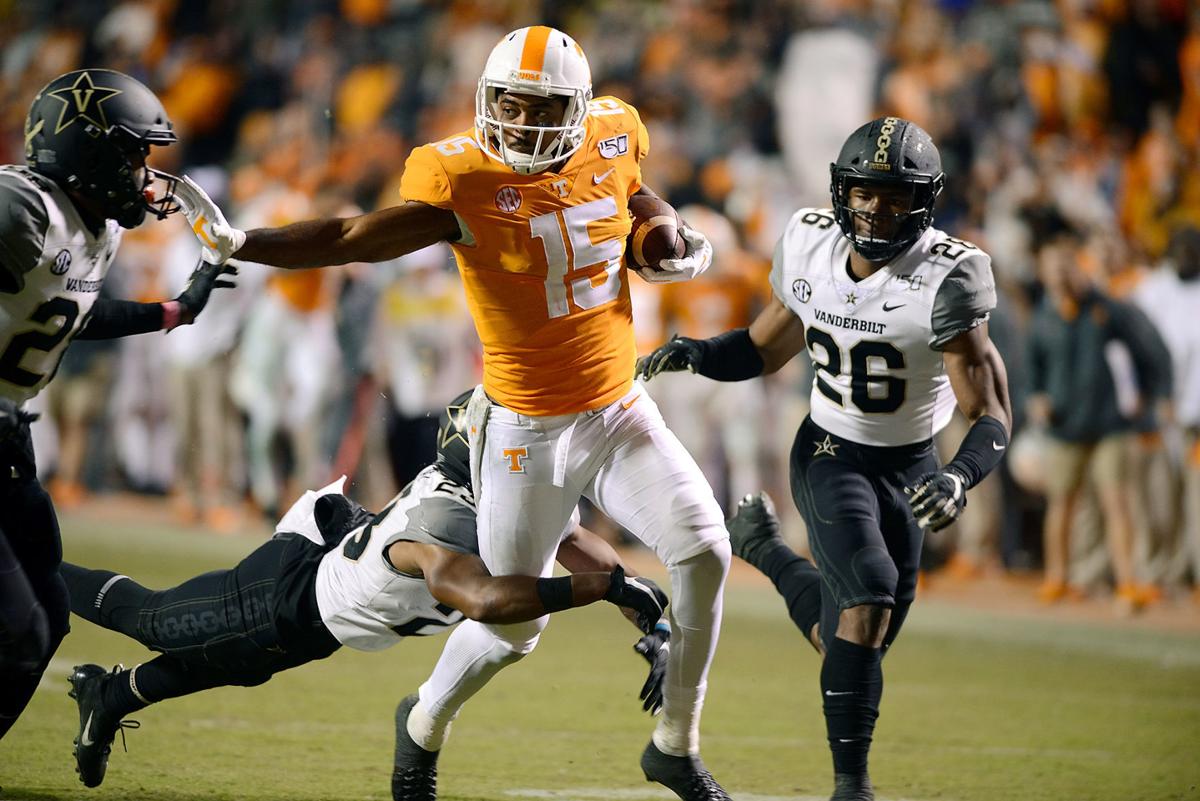 Jauan Jennings (15) rumbles through Commodore defenders inside the five yard line to set up the Vols for a fourth quarter touchdown in Saturday’s game against Vanderbilt at Neyland Stadium.

Roman Harrison (30) looks to see Vanderbilt QB Riley Neal (6) go down after Harrison made the diving sack in Saturday’s game at Neyland Stadium.

Jauan Jennings (15) rumbles through Commodore defenders inside the five yard line to set up the Vols for a fourth quarter touchdown in Saturday’s game against Vanderbilt at Neyland Stadium.

KNOXVILLE — Tennessee celebrated its senior class before Saturday’s game against Vanderbilt, but it seems like a lock that one of the underclassmen also played at Neyland Stadium for the final time.

Three years removed from high school graduation, junior offensive lineman Trey Smith is eligible for the 2020 NFL Draft, and it will be a surprise if he doesn’t choose that route.

Don’t bother asking him to discuss that topic, though.

He doesn’t want to.

“I am not really focused on that,” Smith said after the 28-10 win over the Commodores.

“I am focused on the bowl game (and) making sure our team is successful while donning orange and white.”

If Smith eventually makes it as a successful NFL player it will be a fantastic story.

His tale of adversity is well documented, but he never lost sight of his dream to play football.

When blood clots were discovered again in his lungs last season it was a long shot that Smith would return to the field.

Perhaps more impressively, Smith has excelled in his return despite barely practicing as a result of the plan devised by doctors.

The lack of practice meant a slow start to the season, but about one month into it he said he finally began feeling like he could play at a high level.

“I probably started feeling a little bit of that at Florida, based off the feedback from the coaches,” Smith said.

“But I think in my mind, the most comfortable I got in this season was the Mississippi State game. It just felt a little bit natural for some reason. It was just flowing well. I think I attribute it to that game.”

Smith, who moved from left tackle to left guard as a result of his scaled-back practice plan, has had plenty of help along the offensive line.

At times, however, he has been a one-man wrecking machine.

He had another strong game Saturday as the Vols piled up 297 rushing yards on 41 carries — an average of 7.2 yards per carry — and scored three rushing touchdowns.

The two-time SEC Offensive Lineman of the Week seems to be picking up steam as the season goes on, and he doesn’t want to let up ahead of the Vols’ bowl game, the details of which they will find out on Dec. 8.

That’s because it’s all about his current team at this point, which is the same page all of his teammates got on after the loss to Florida.

Not so coincidentally, that’s also when Smith started to turn a corner.

“He wanted to get back on the field as fast as he could, not just for himself.

“He felt like he was letting us down by him not being able to be out there with us. So, I know he was eager to get back not just for himself but to help us, too.”

Freshman running back Eric Gray displayed his high-level talent Saturday by rushing for a Tennessee true freshman record 246 yards and scoring three touchdowns, but a few of his teammates said they weren’t surprised because of what he is like off the field.

Smith said he has been impressed with Gray’s maturity over the years.

“He’s one of those young guys that doesn’t act like a freshman,” Bituli said.

“You can speak to him and I feel like I’m talking to a senior. He’s definitely matured a lot.

“He’s one of those guys that is going to end up leading this team when he gets older.”

In the week leading up to Saturday’s annual game against Vanderbilt, Tennessee’s players toed the company line when asked about the rivalry.

We have to treat like any other game, they said.

It’s important for us not to let it get too big, they added.

It turns out they were just being politically correct.

Vanderbilt had beaten Tennessee three years in a row for the first time since 1926.

The Commodores also won in 2012 and 2013 to give them five wins in the last seven before this season. In the 29 years before that, Vanderbilt had beaten Tennessee one time.

Defensive lineman Matthew Butler went so far as to say losing three in a row was embarrassing.

For Smith, it was personal.

Growing up in between Memphis and Nashville, Tennessee beating Vanderbilt is all he ever knew.

“I’m a Tennessee guy,” Smith said. “The reason I came to this school is how much I love this state.

“Restoring the order, restoring the balance of where these programs should be in terms of that means the most to me.

“Hats off to that team. They played tough all night. They showed a lot of resilience.

“They played well, but it’s our state so it was nice restoring the balance.”

Senior wide receiver Jauan Jennings had two receptions for 56 yards against Vanderbilt to move into sole possession of fifth place on Tennessee’s career receptions list. Entering the game, he was tied with Gerald Jones with 142.

Callaway had one reception for 19 yards against Vanderbilt to move into 17th-place in school history in receiving yards with 1,627.

Quavaris Crouch got his at the end of the first quarter.

Roman Harrison got his on the next play.