Tennessee quarterback Hendon Hooker (5) can’t escape a tackle by Florida linebacker Jeremiah Moon (right) during the second half of an SEC East game on Saturday in Gainesville, Florida. 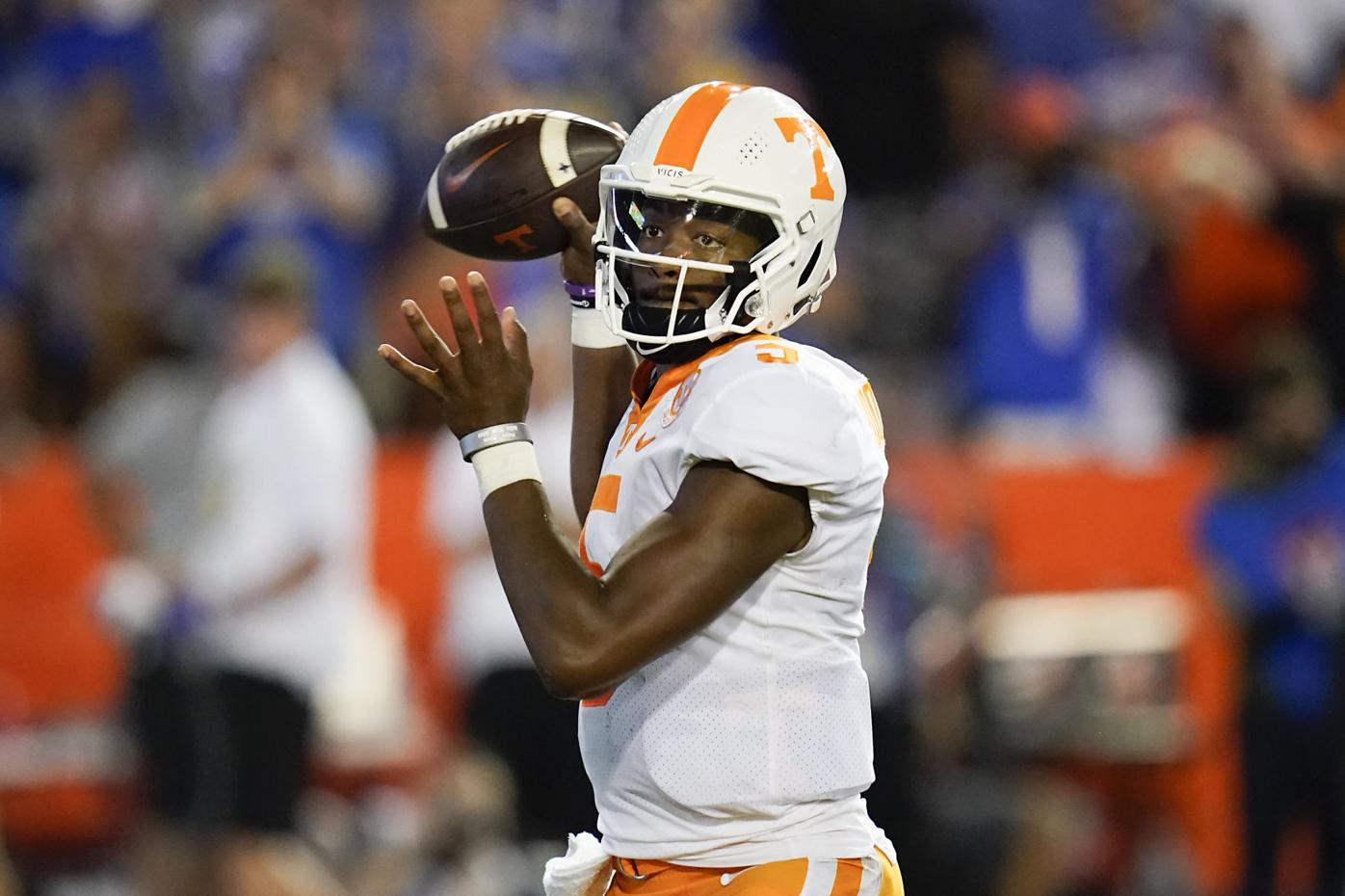 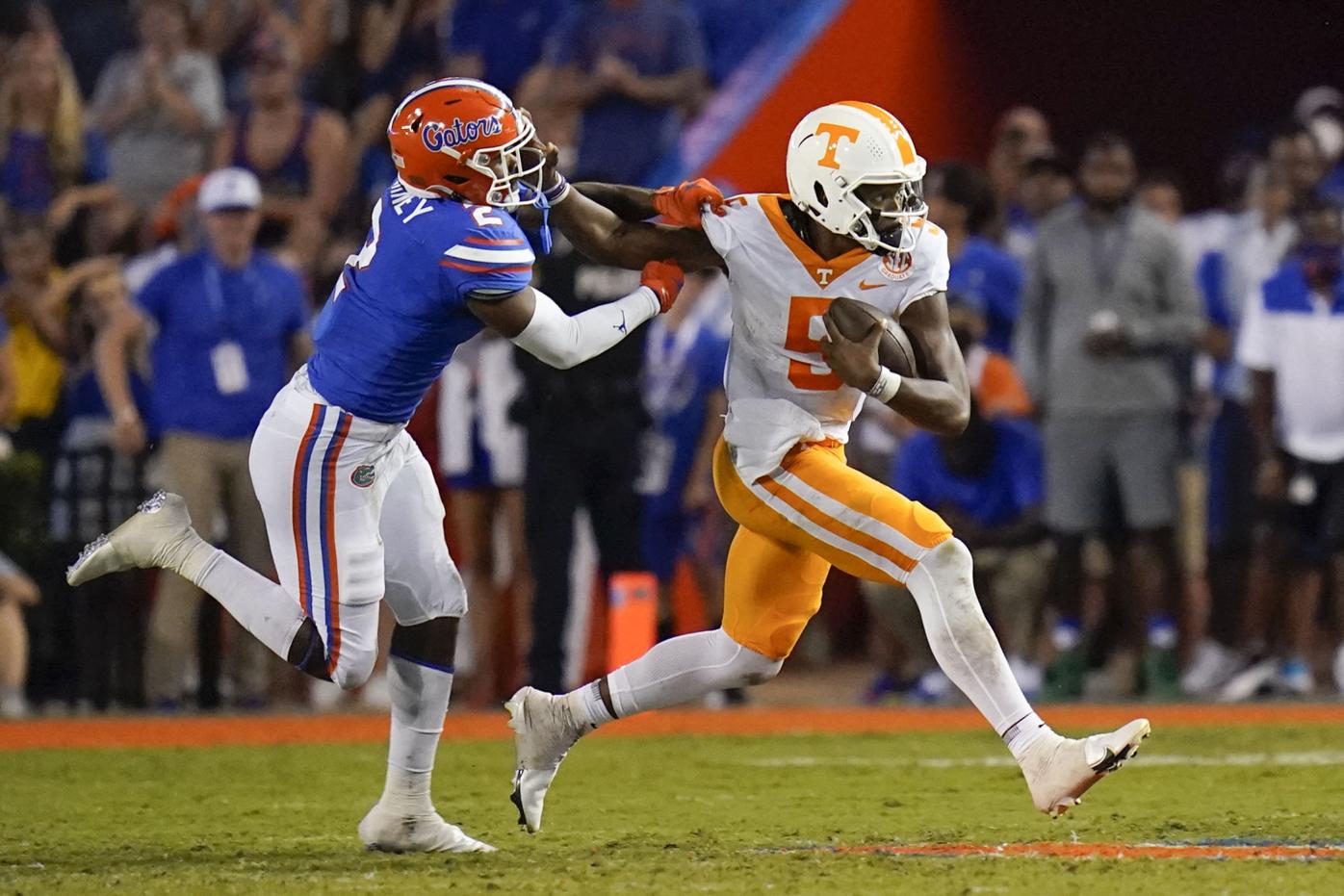 Tennessee quarterback Hendon Hooker (5) scrambles as he tries to get past Florida linebacker Amari Burney (2) during the first half of an NCAA college football game, Saturday, Sept. 25, 2021, in Gainesville, Fla. (AP Photo/John Raoux)

Tennessee quarterback Hendon Hooker (5) can’t escape a tackle by Florida linebacker Jeremiah Moon (right) during the second half of an SEC East game on Saturday in Gainesville, Florida.

Tennessee quarterback Hendon Hooker (5) scrambles as he tries to get past Florida linebacker Amari Burney (2) during the first half of an NCAA college football game, Saturday, Sept. 25, 2021, in Gainesville, Fla. (AP Photo/John Raoux)

KNOXVILLE — Tennessee’s chances of catching up to No. 10 Florida last Saturday night in Gainesville were already slim when starting quarterback Hendon Hooker left the game.

Hooker was 13-of-23 passing for 221 yards and two touchdowns with one of those scores coming off a 75-yard scoring pass to wide receiver JaVonta Payton that gave the Vols a 14-10 lead over the Gators in the second quarter, but was sidelined after taking a hit midway through the fourth quarter with Florida leading 31-14.

While Hooker was not in concussion protocol according to Tennessee head coach Josh Heupel, he said during his Monday press conference that the Virginia Tech transfer quarterback’s status was uncertain ahead of the Vols (2-2, 0-1) conference road tilt with Missouri (2-2, 0-1 SEC) on Saturday in Columbia, Missouri.

Joe Milton stepped in after Hooker’s exit, making his first appearance at quarterback since leaving the Pittsburgh game with an injury in the third quarter.

Heupel said that Milton, who started against Bowling Green and Pitt, wasn’t exactly 100% from his own injury when he entered the game where he completed two passes for 54 yards in limited action.

“Joe was in a situation where he could play,” Heupel said. “Wasn’t at full 100%. During the week we got him some work, not the same type of numbers that he could have gotten if he was 100%. I anticipate, just through him playing the other night, didn’t re-injure or aggravate anything. Continue to think he’ll get healthier as the week goes on.”

As for Milton getting the start at Missouri should Hooker be unavailable, Heupel wasn’t ready to commit to that on Monday.

“I’m not going to speak to situations that aren’t real at this point,” Heupel said. “We’ll see where we’re at during the course of the week and go from there.”

Hooker isn’t the only player whose playing status is in limbo before Tennessee’s second-straight SEC road contest.

The Vols’ offense got back center Cooper Mays for the first time since he suffered a lower-body injury following Tennessee’s 38-6 win over Bowling Green on Sept. 2. Mays sat out games against Pittsburgh and Tennessee Tech before starting in the Florida loss. He was one of several players making their return to the field following injuries including running back Jabari Small, punter Paxton Brooks and linebacker Juwan Mitchell.

Mays was unable to finish the game because of the lingering injury but protested the decision to leave, something Heupel credited the sophomore for.

“(Mays) cares about playing at a really high level,” Heupel said. “Cares about the Power ‘T,’ cares about his teammates, wants to be in there. He’s a warrior. As the game went on, you watch the film, you can tell that things started to bother him as the game wore on. He didn’t want to come out. He competed extremely hard.”

With Mays starting at Florida, Jerome Carvin moved back to the left guard position, but will likely be back at center against the Tigers if Mays’ situation doesn’t improve this week.

Carvin started at guard in week one, but filled in at center in the two previous games that May missed and finished at center last week and there were multiple snaps that Hooker had to pick up off the ground which allowed the Gators’ defense to get into the Vols’ backfield.

“I think the toughest thing for (Carvin), when he’s starting at one spot, getting him enough reps at the next spot is difficult to manage and get what you need out of both during the course of the week at practice,” Heupel said. “At the end of the day, some of the snaps have got to get better. That’s true of (Mays) as well.”