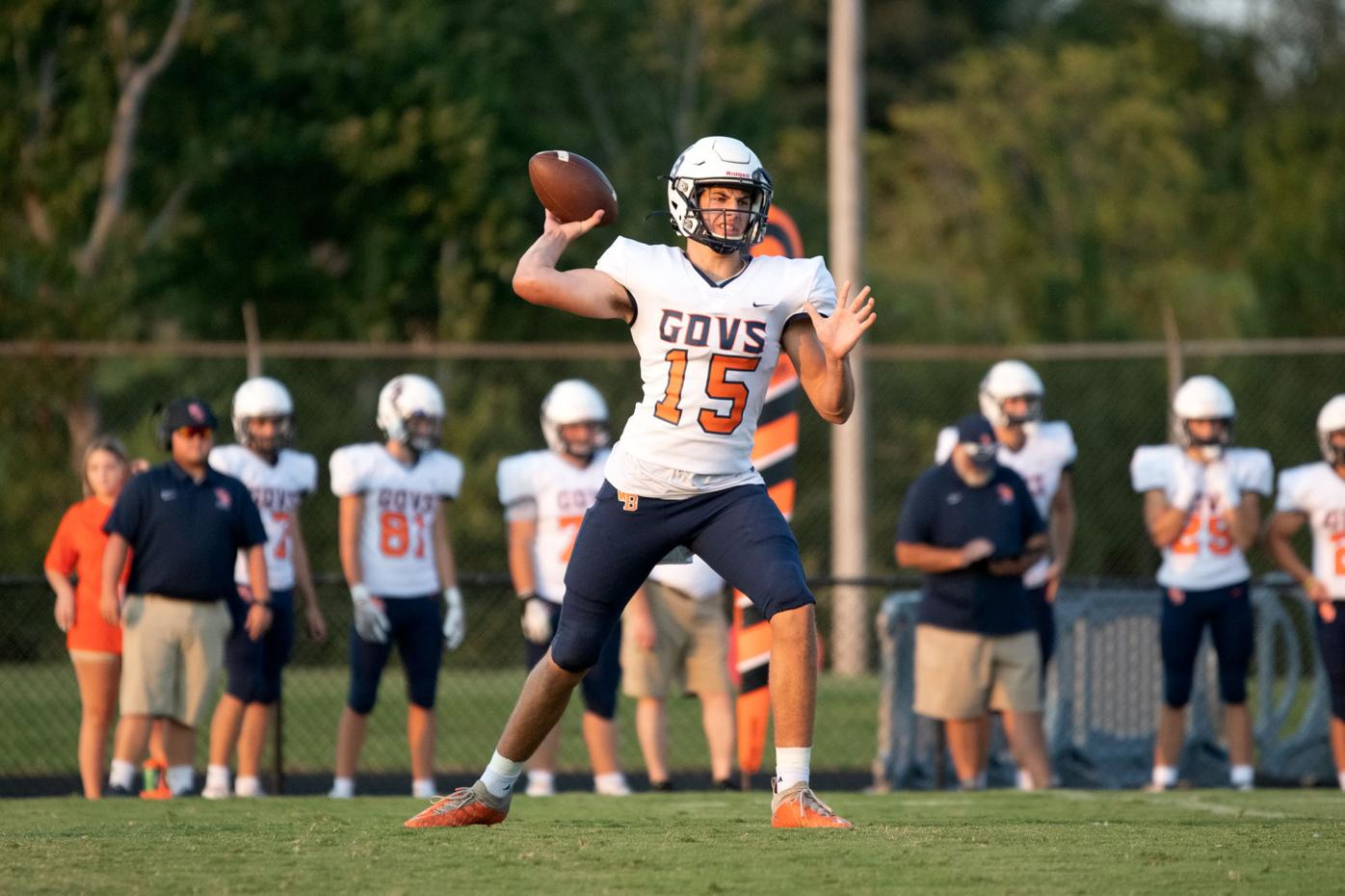 William Blount quarterback Matthew Clemmer drops back to pass against Heritage on Friday during the Battle for the Bell at Lillard Field. 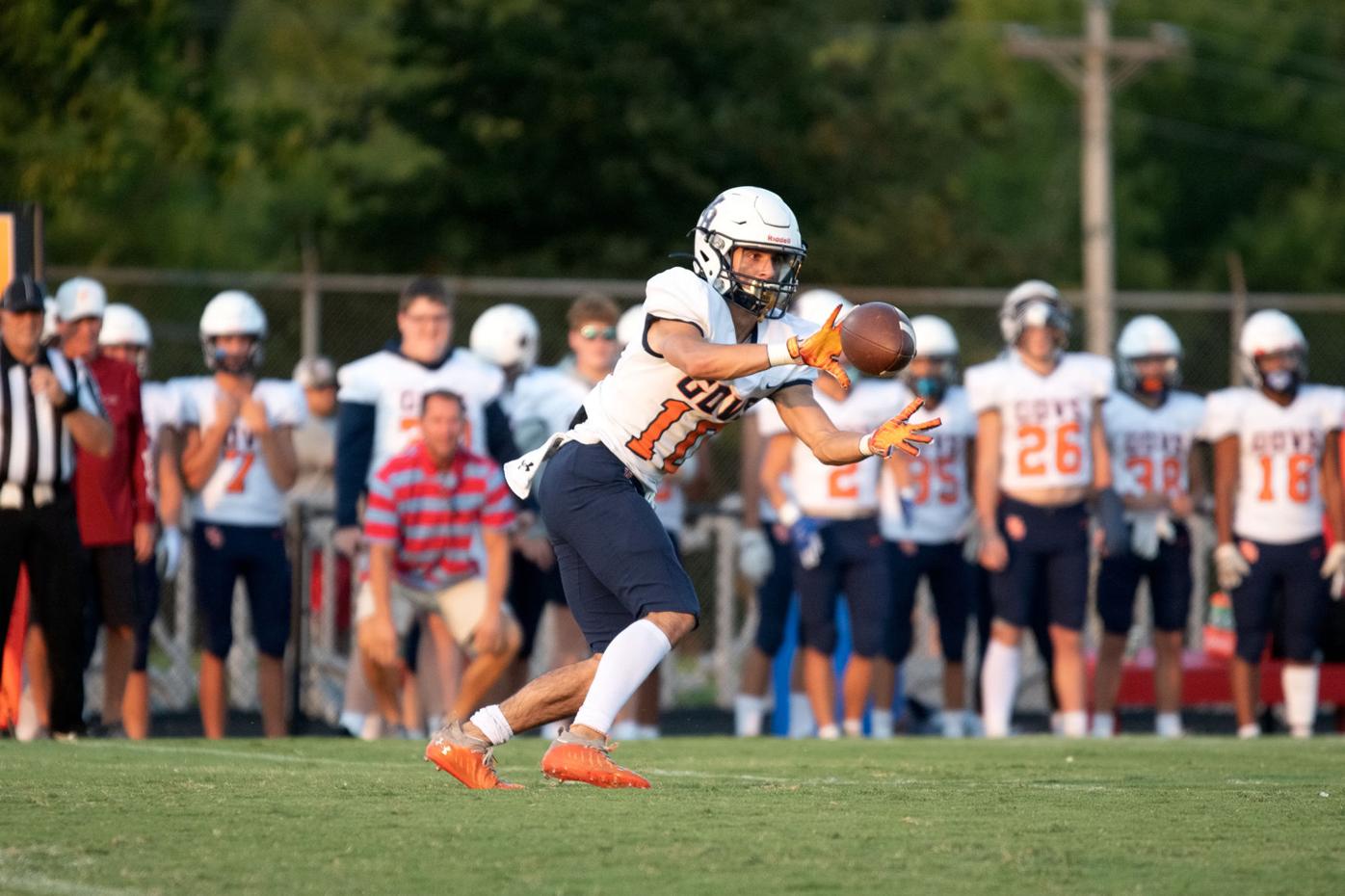 William Blount’s Ashton Auker makes a catch against Heritage on Sept. 10 during the Battle for the Bell at Heritage’s Lillard Field. 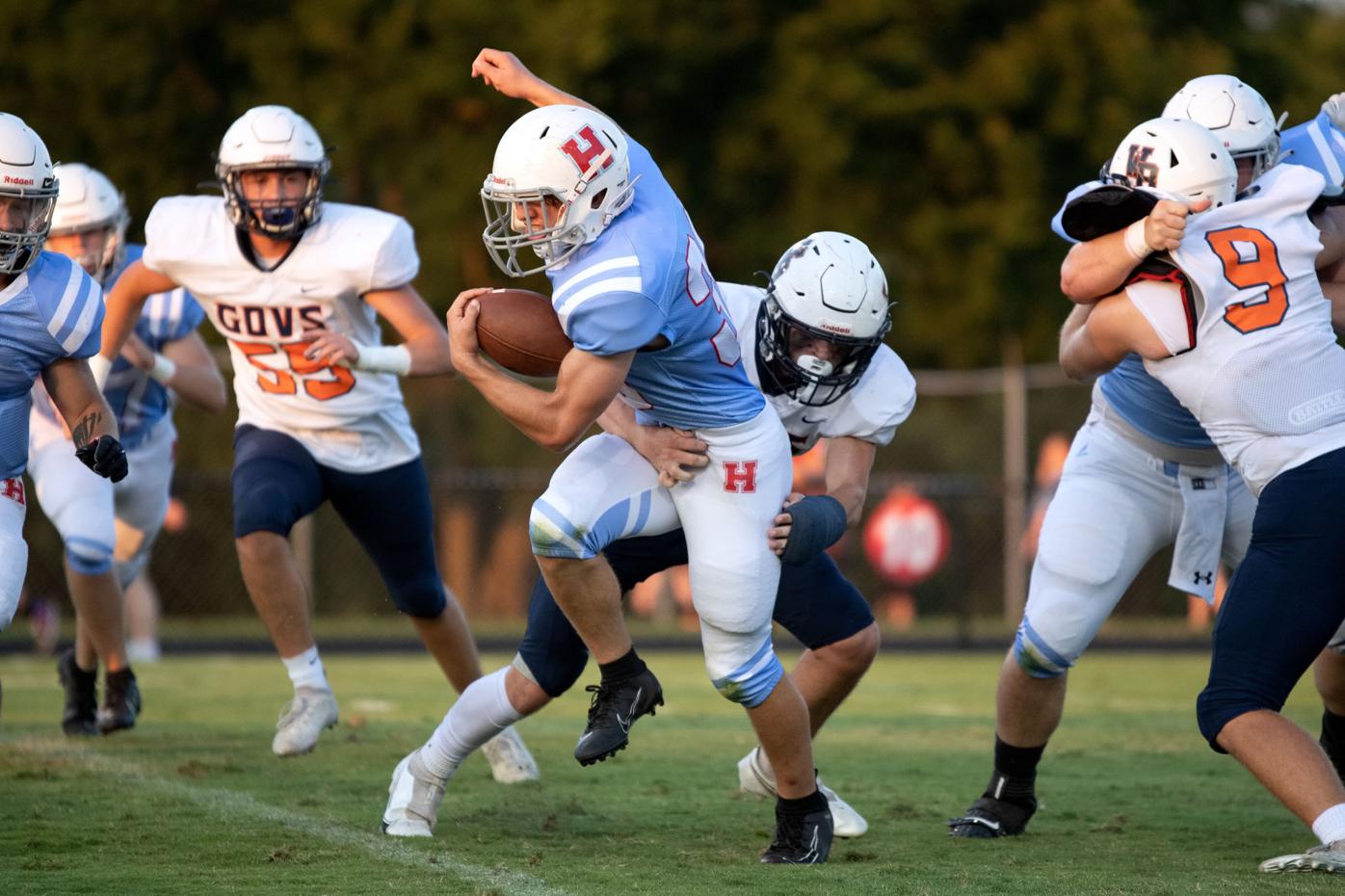 Heritage's Isiah Fagg tries to escape from William Blount's Brandon Muse on Friday, Sept. 10, during the Battle for the Bell at Heritage's Lillard Field. 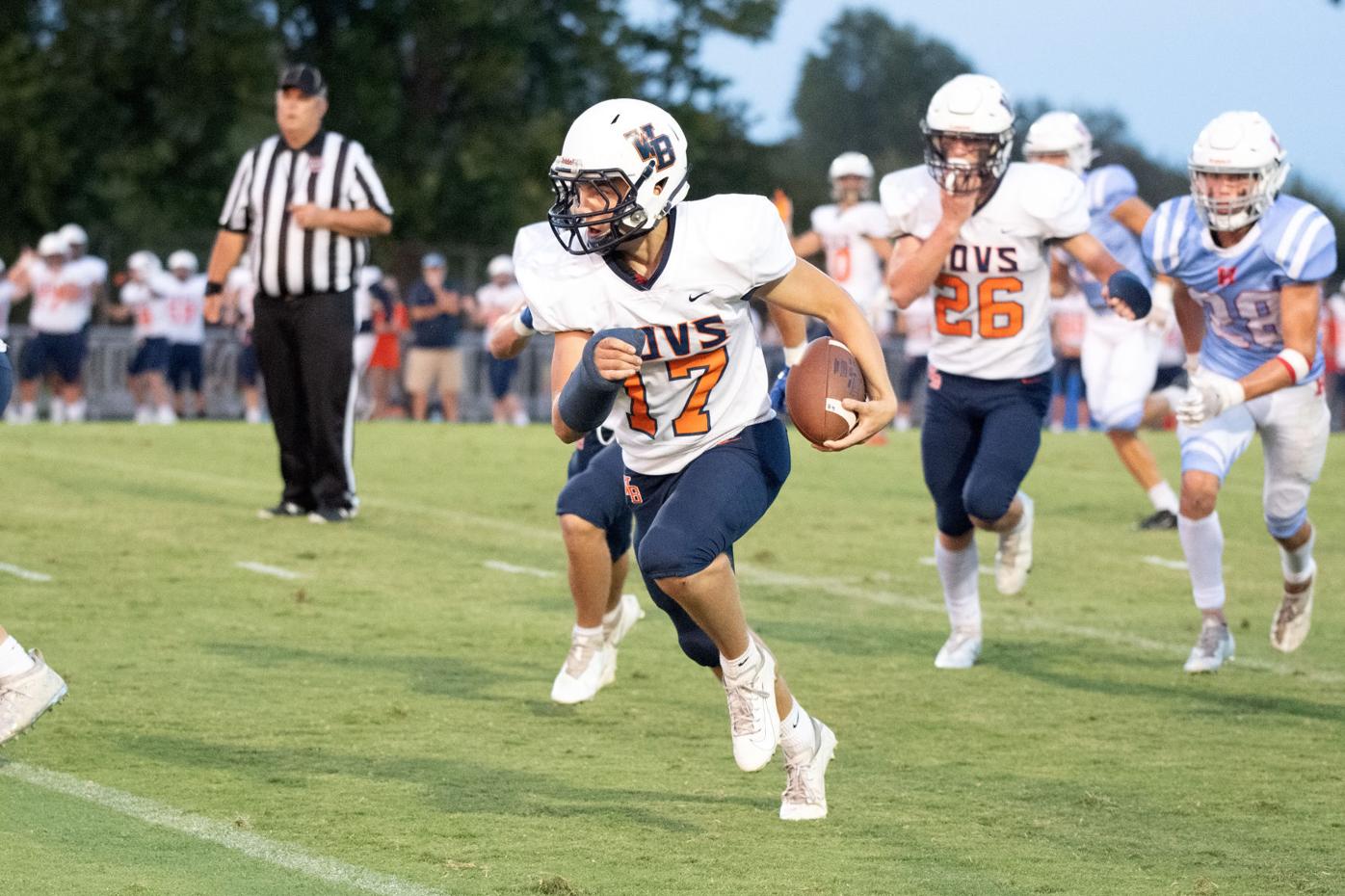 William Blount’s Cody Baumgardner heads the other direction after intercepting a Heritage pass Friday during the Battle for the Bell at Lillard Field. 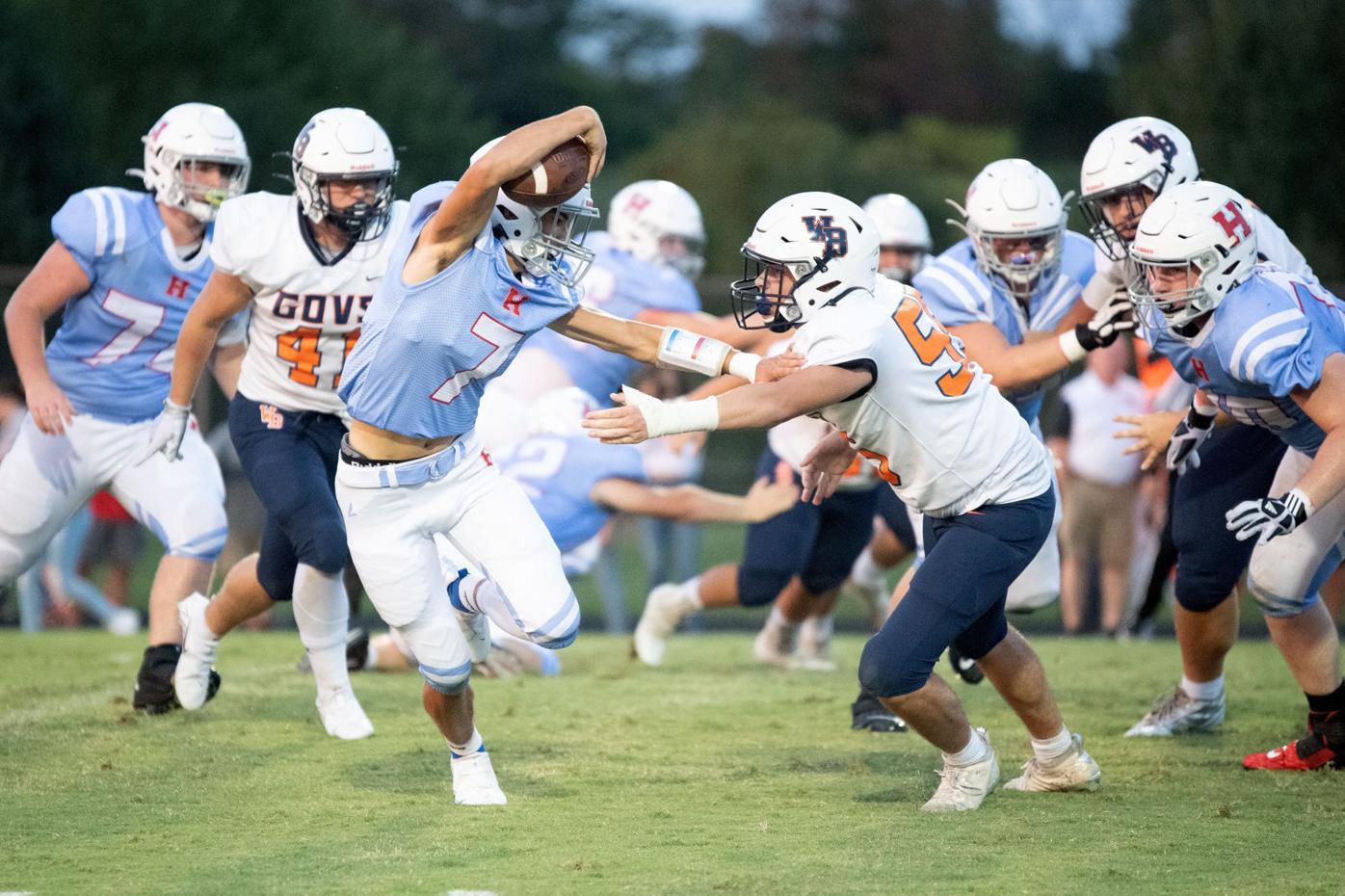 William Blount quarterback Matthew Clemmer drops back to pass against Heritage on Friday during the Battle for the Bell at Lillard Field.

William Blount’s Ashton Auker makes a catch against Heritage on Sept. 10 during the Battle for the Bell at Heritage’s Lillard Field.

Heritage's Isiah Fagg tries to escape from William Blount's Brandon Muse on Friday, Sept. 10, during the Battle for the Bell at Heritage's Lillard Field.

William Blount’s Cody Baumgardner heads the other direction after intercepting a Heritage pass Friday during the Battle for the Bell at Lillard Field.

Philip Shadowens made his way through the crowd of William Blount players and students before lifting his arms and joining in on the postgame pandemonium.

His Governors let out three games worth of frustration to get their first win and did it against their biggest rival. WB took a convincing 38-18 win over Heritage, to claim the 43rd Battle of the Bell on Friday at the Mountaineers’ Jack Renfro Stadium.

“It feels good,” Shadowens told The Daily Times. “Obviously our kids needed a win. I thought we had a heartbreaker last week in a game that we battled, so you always want to respond to that and it makes it easier playing a rivalry game.”

William Blount (1-3) set the tone early, scoring on its first two offensive drives, starting with a Matthew Clemmer 58-yard pass to Ashton Auker to give the Govs a 7-0 lead less than two minutes into the fourth quarter.

It was the first of five touchdown passes from Clemmer to go along with more than 300 yards through the air, and it helped William Blount to its first lead this season.

“To be able to jump out on that big play, I think the whole team got behind that and it just carried throughout the game,” Clemmer said.

Clemmer’s second touchdown pass was set up by a 40-yard throw to Job Matossian that put the Govs inside the Heritage 5-yard line. He rolled out and hit Brandon Keeble in the end zone the following play to extend the lead to 14-0.

A few more scoring opportunities in the first quarter were snuffed out by a pair of turnovers.

Clemmer fumbled and then a pass at the goal line was picked off by the Mountaineers’ Ryan Butler, but Heritage couldn’t take advantage.

With time expiring in the first quarter, Matossian hauled in a Clemmer pass from eight yards out to provide the finishing touches of a commanding first quarter.

As impressive as the Govs looked on both sides of the ball in the first 12 minutes, they struggled in the second quarter, managing just three points off of a Matossian 32-yard field goal. Heritage found success in its run game and scored on a Cayleb O’Conner 23-yard touchdown run to make it a 24-6 game at the intermission.

William Blount’s defense stiffened up in the second half, holding the Mountaineers scoreless and limited their rushing attack which was able to find openings in the second quarter.

It was a welcome sight for Shadowens as the Govs had struggled in run defense in the first three games. The defense also accounted for two turnovers, including a fumble inside the 25-yard line on what looked like a promising Heritage drive.

“I thought we did a better job,” Shadowens said. “We knew (Heritage) was going to try and run the ball and control the clock. We knew we had to stop the run game and I thought there were a lot of parts of the game that we did. I thought our defense took a step forward.”

After going scoreless in the third quarter, Clemmer and the offense got back into its first quarter rhythm, connecting with Matossian for a 38-yard touchdown at the 11:23 mark of the fourth.

The Mountaineers (0-4) responded with O’Conner’s second touchdown run, but Aucker put the punctuation mark on the win by snagging Clemmer’s fifth scoring pass on fourth down with 1:35 left.

“You couldn’t have picked a better night for a win,” Clemmer said. “This win can get us going in the right direction and build our confidence. We’ve got to keep going.”