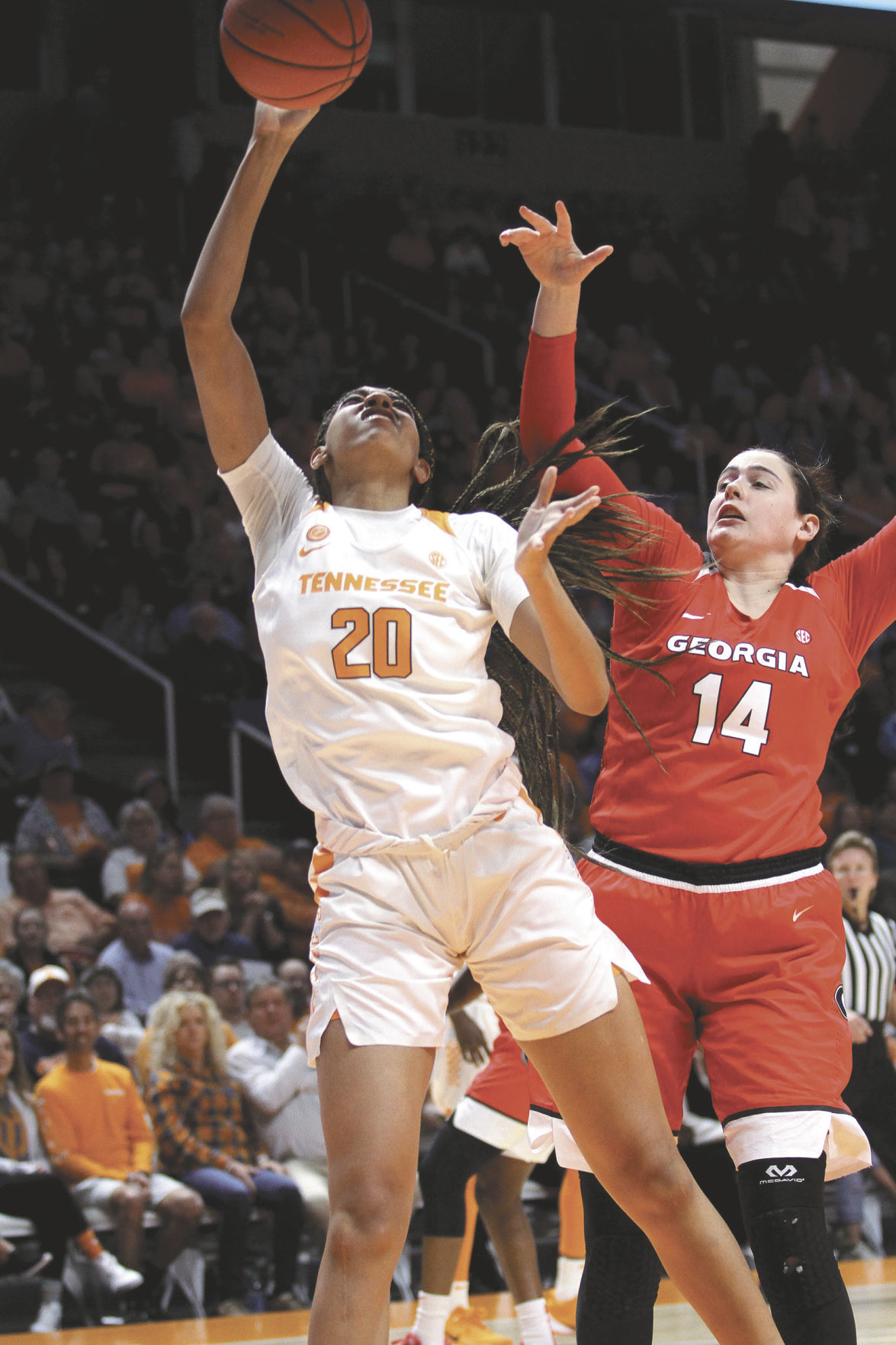 Tennessee’s Tamari Key drives for layup against Georgia’s Jenna Stalti in the Lady Vols’ 73-56 win over Georgia on Sunday at Thompson-Boling Arena in Knoxville. 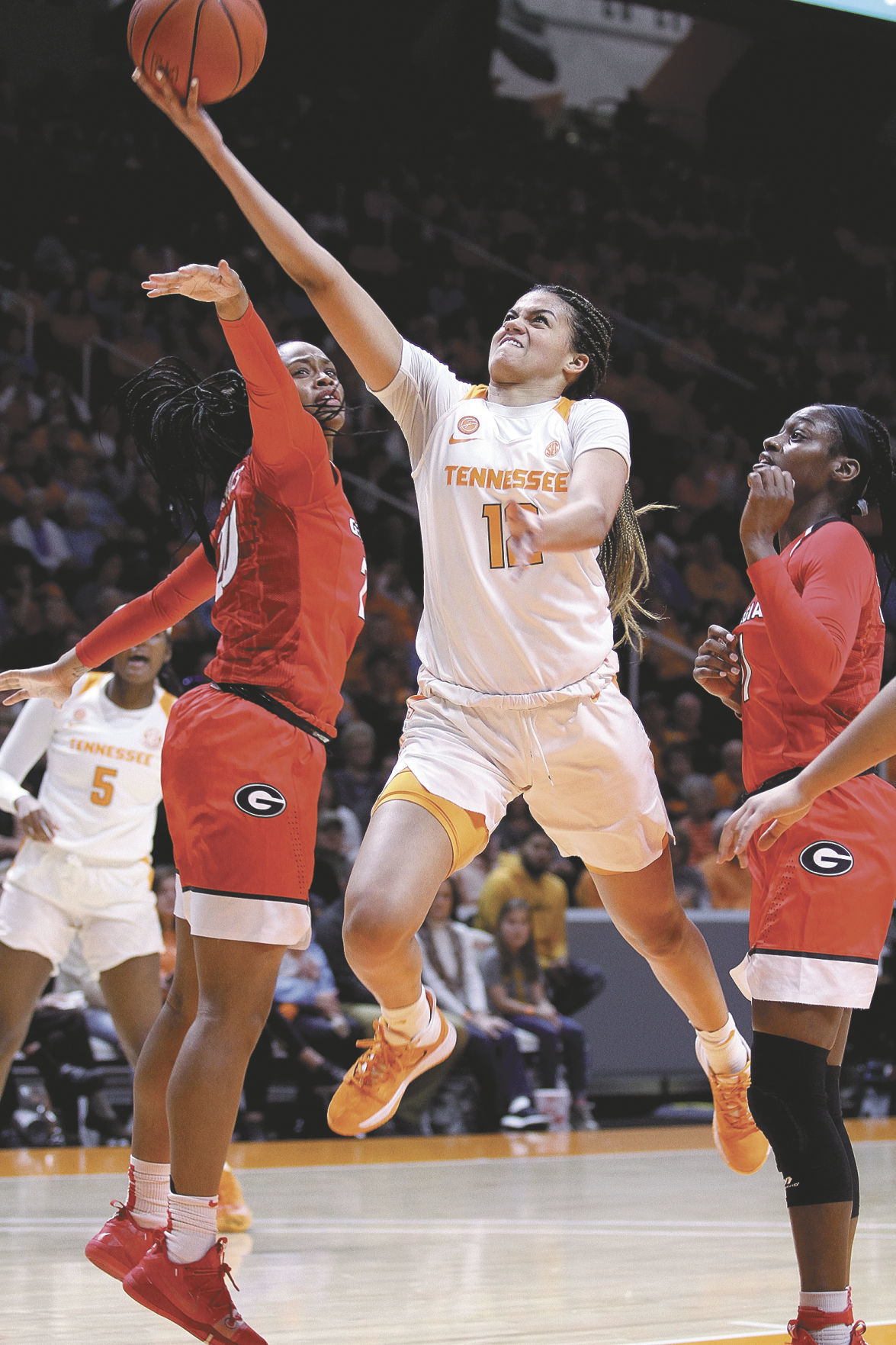 Tennessee’s Tamari Key drives for layup against Georgia’s Jenna Stalti in the Lady Vols’ 73-56 win over Georgia on Sunday at Thompson-Boling Arena in Knoxville.

What it didn’t seem to have much of — at least not consistently — was chemistry.

Coming off their worst season in the modern era, the No. 24 Lady Vols insist things are different now.

“It’s just fun playing for a group of people who put the team before themselves,” junior Rennia Davis said. “I think that’s the biggest thing to us — this team and where this team is trying to go — not anything individual.”

Things have been clicking for Tennessee on the court in its last two games, during which the Lady Vols have combined for 44 assists. Their 18.3 average ranks first in the SEC.

“I think our players are very bought in and want to win,” Tennessee coach Kellie Harper said. “We have to continue to push these players, both their skill level and effort, and also with how to be good teammates. We constantly need to work on that.”

The Lady Vols have been on a roll as of late. They cruised past Ole Miss, 84-28, last week on the road before downing Georgia, 73-56, Sunday at Thompson-Boling Arena.

Jordan Horston is among the most emphatic about — and perhaps representative of — the Lady Vols’ unselfish nature. The freshman point guard leads the team in assists with 5.1 a game, ranking her first in the SEC.

Horston is not only not shy about contributing. She’s also not shy in front of the media. In Sunday’s postgame press conference, Horston interjected after Davis was asked what Harper was doing differently to get this team of super stars to mesh.

Horston is one of five McDonald’s All-Americans on Tennessee’s roster.

“Wait, can I say something real quick?” Horston asked, cutting off Davis.

Davis laughed and threw up her hands.

Horston continued. She reiterated the team doesn’t think like individuals.

“It’s not anything that can be coached,” Horston said. “You just have to have that. I feel like everybody — we all want to win, so we’re going to do what we’ve got to do.”

Questions about the team’s chemistry come from last season, when the Lady Vols checked off a handful of negative milestones. Tennessee suffered its longest losing streak in almost half a century and its first losing conference record while allowing Missouri and Vanderbilt to notch their first wins in Knoxville.

It could have been worse. The Lady Vols managed to avoid hitting rock bottom by slipping into the NCAA Tournament for the 38th straight season, sustaining their status as the only program to play in every tournament since it began in 1982.

Those inexplicable shortcomings came into focus moments after Tennessee’s season came to an end with a first-round loss to UCLA in the NCAA Tournament.

Sitting in the locker room in College Park, Md., then-sophomore point guard Evina Westbrook directed some blame at then-coach Holly Warlick, who had been tasked with following Pat Summitt.

“We’ve got to fix some stuff,” said Westbrook, who had taken on the role of team leader.

She paused for a moment before adding, “With our staff.”

Those comments revealed a team that just wasn’t in sync.

Warlick was fired shortly after, and Harper was hired to get the program back on track. With her background as a former Lady Vol and success at the helm of Missouri State, Harper was an exciting new chapter for Tennessee.

It didn’t hurt that freshmen such as Horston and Tamari Key were so eager to buy in.

“I feel like we all came in with the same goal: To be on the same page,” Key said. “I feel like that wasn’t something that we really needed to worry about when it came to what accolades people had before.”

Harper has certainly brought fresh energy to a program struggling to live up to its impossible legacy of greatness.

She has also brought perspective — an appreciation for what Tennessee has meant to women’s sports.

“It’s big that Kellie mentions to us every so often — in case anybody does decide to step outside their box — nobody is bigger than this program,” Davis said. “We’re here for our four years and then, after that, someone else is going to come in and replace us with the hopes of keeping the same energy we had while we were here.

“It’s all about the program.”