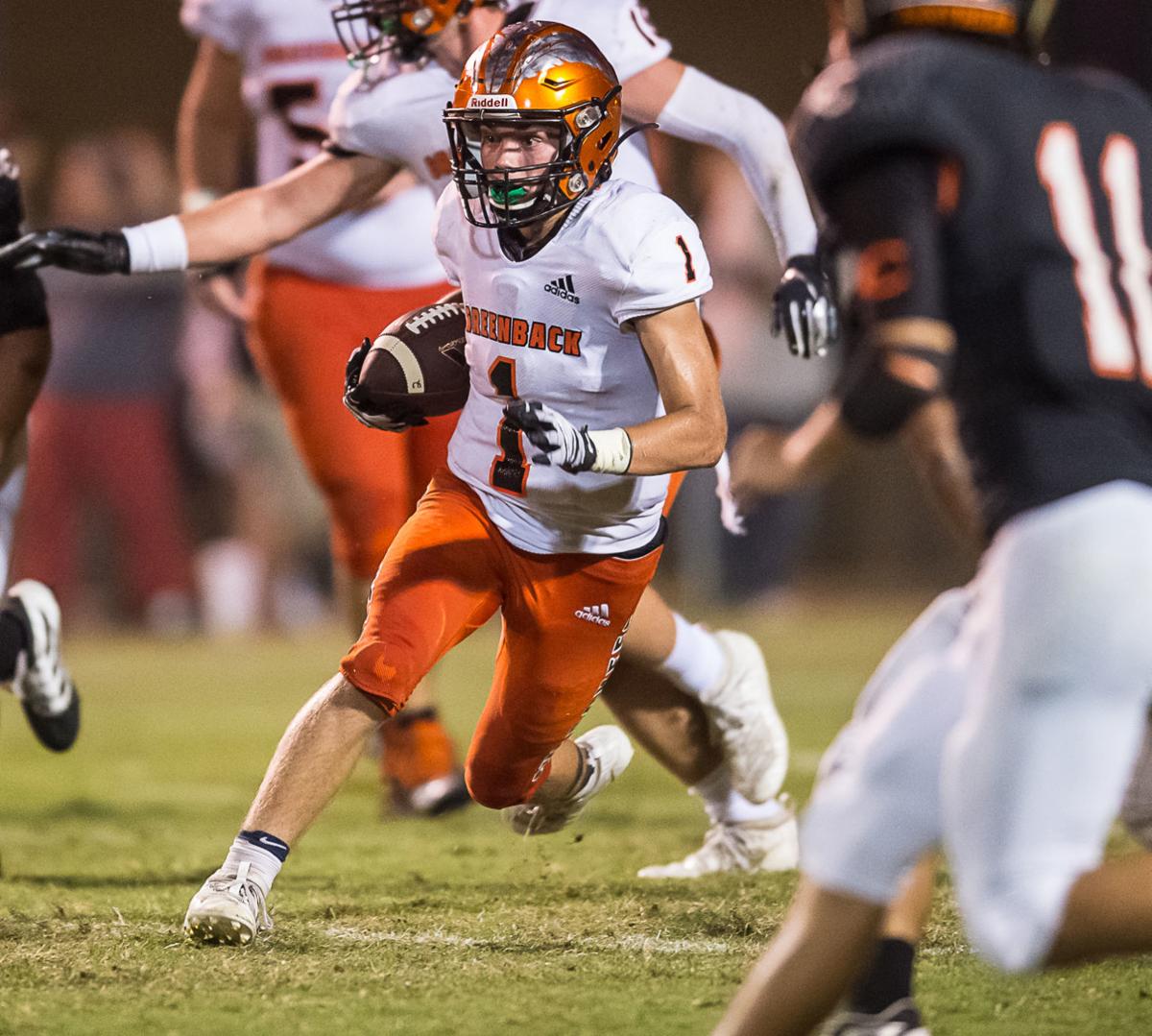 Greenback School’s Wyatt Rutgerson breaks off a run on Sept. 27 in the Cherokees’ win over the Lenoir City High School Panthers. 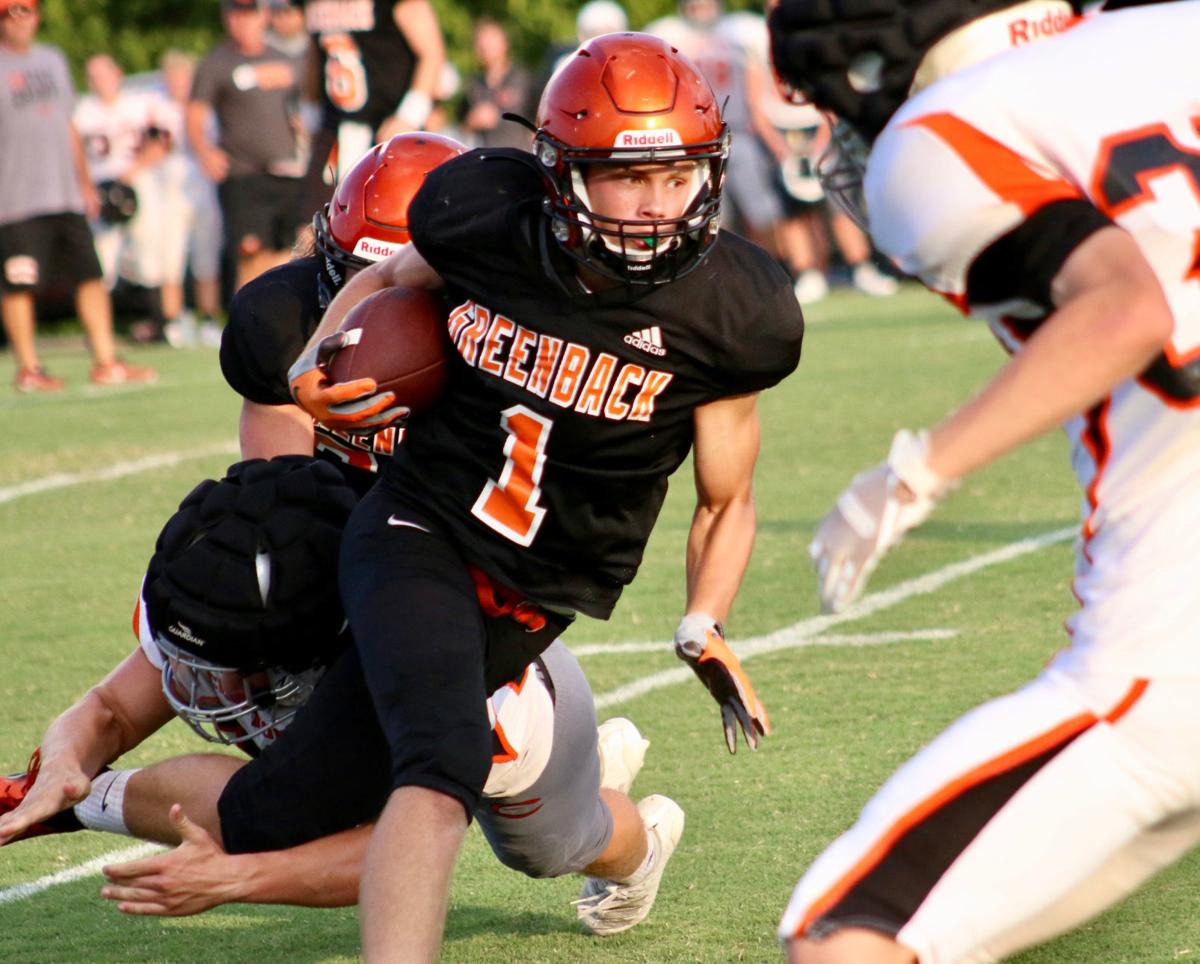 Greenback School’s Wyatt Rutgerson carries the ball during a scrimmage on Aug. 9 against Clinton High School.

Greenback School’s Wyatt Rutgerson breaks off a run on Sept. 27 in the Cherokees’ win over the Lenoir City High School Panthers.

Greenback School’s Wyatt Rutgerson carries the ball during a scrimmage on Aug. 9 against Clinton High School.

GREENBACK — Greenback forced opposing defenses to play “Where’s Wyatt?” the first two weeks of the season, but the game of cat and mouse proved to be more of detriment than a benefit.

The Cherokees’ decision to showcase Wyatt Rutgerson’s versatility by bouncing him between running back and wide receiver unintentionally created a tendency that tipped their hand, allowing defenses to know whether a run or pass was coming based on where the senior lined up.

Rutgerson has since settled in the backfield, for the most part, providing balance for Greenback’s offense, which is averaging 45.4 points per game during its current five-game winning streak.

“It got to the point where Wyatt was our best running back,” Greenback coach Greg Ryan told The Daily Times. “It’s made our screen game much better and that has made our pass protection better because teams are worried about the back out of the backfield.

“He’s made us better as a team overall because of his versatility.”

Greenback (5-2, 3-0 Region 2-1A) rushed for 46 yards on 35 carries (1.3 yards per carry) in its losses to Loudon and Meigs County to open the season. It is averaging 142.2 rushing yards per game and 7.6 yards per carry in its last five games — all of which have seen Rutgerson lead the team in carries.

The emergence of a rushing attack has the Cherokee offense operating at its full potential, and Rutgerson has been the perfect compliment to senior wide receiver Holden Willis, who has amassed 967 yards and 17 touchdowns already.

Rutgerson has logged 720 yards from scrimmage (427 rushing, 293 receiving) through the first seven games of the season. He also has 172 return yards, 20 tackles and two interceptions.

The William Blount transfer racked up 129 yards and a touchdown on seven carries while adding 50 yards and another score on two receptions in Greenback’s 45-20 victory over rival Coalfield on Friday.

“I didn’t expect such a big role and everywhere on the field, but I really enjoy it,” Rutgerson said. “I feel like Coach Ryan has put me in a position to succeed in everything I do.

Ryan got a good gauge for Rutgerson’s athleticism last spring while coaching him during the Cherokees’ state baseball championship run and offseason workouts made it clear that he would have an integral role in the offense.

Rutgerson has a team-high 69 touches, a usage rate that suggests he plays bigger than his diminutive 5-foot-9, 170-pound frame would indicate.

“It’s something that drives me,” Rutgerson said.

“He comes here in the weight room and squats 330 at 170 pounds, and he’s benching more than 200 pounds,” Ryan added. “We’ve had smaller guys in the past like (Cole and Seth) Riddle and like Duke (Stinnett) is now, but what they all have in common is they’re all really strong kids.

“The thing you worry about with a small guy is when they get hit, they go flying, but Wyatt has really good balance, so you have to wrap him up and take him down.”

Opposing defenses haven’t had much success slowing Greenback’s Swiss Army knife since it locked in on his best tool.

Rutgerson helped the Cherokees reverse course after a slow start, and his playmaking ability is part of the reason they have emerged as a Class 1A state championship contender.

“It takes a full 40-man roster along with some luck to make a state championship run, but Wyatt is going to be a key contributor on both sides of the ball and special teams,” Ryan said. “We have total confidence in Wyatt and expect big things from him the rest of the year.”