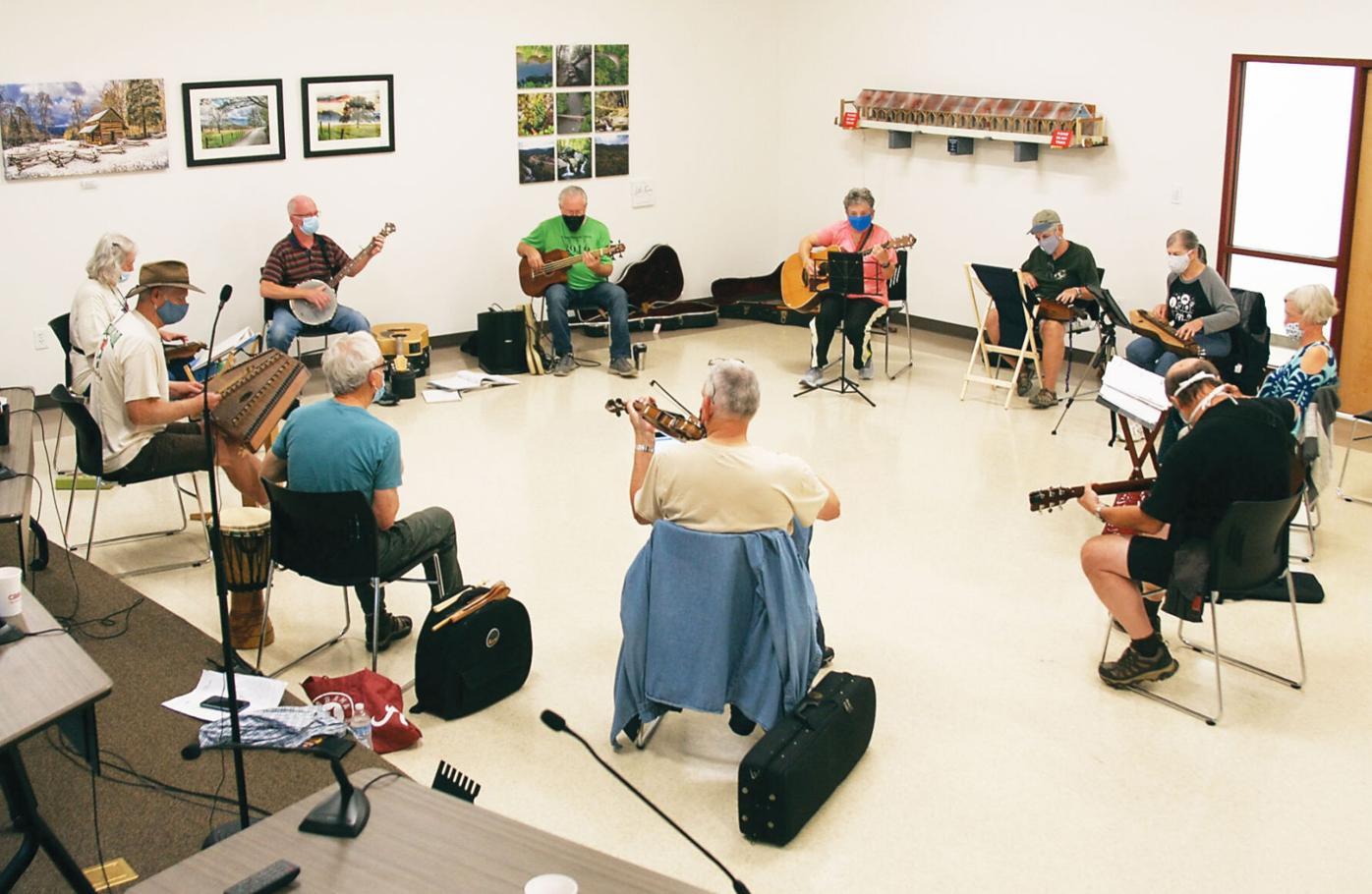 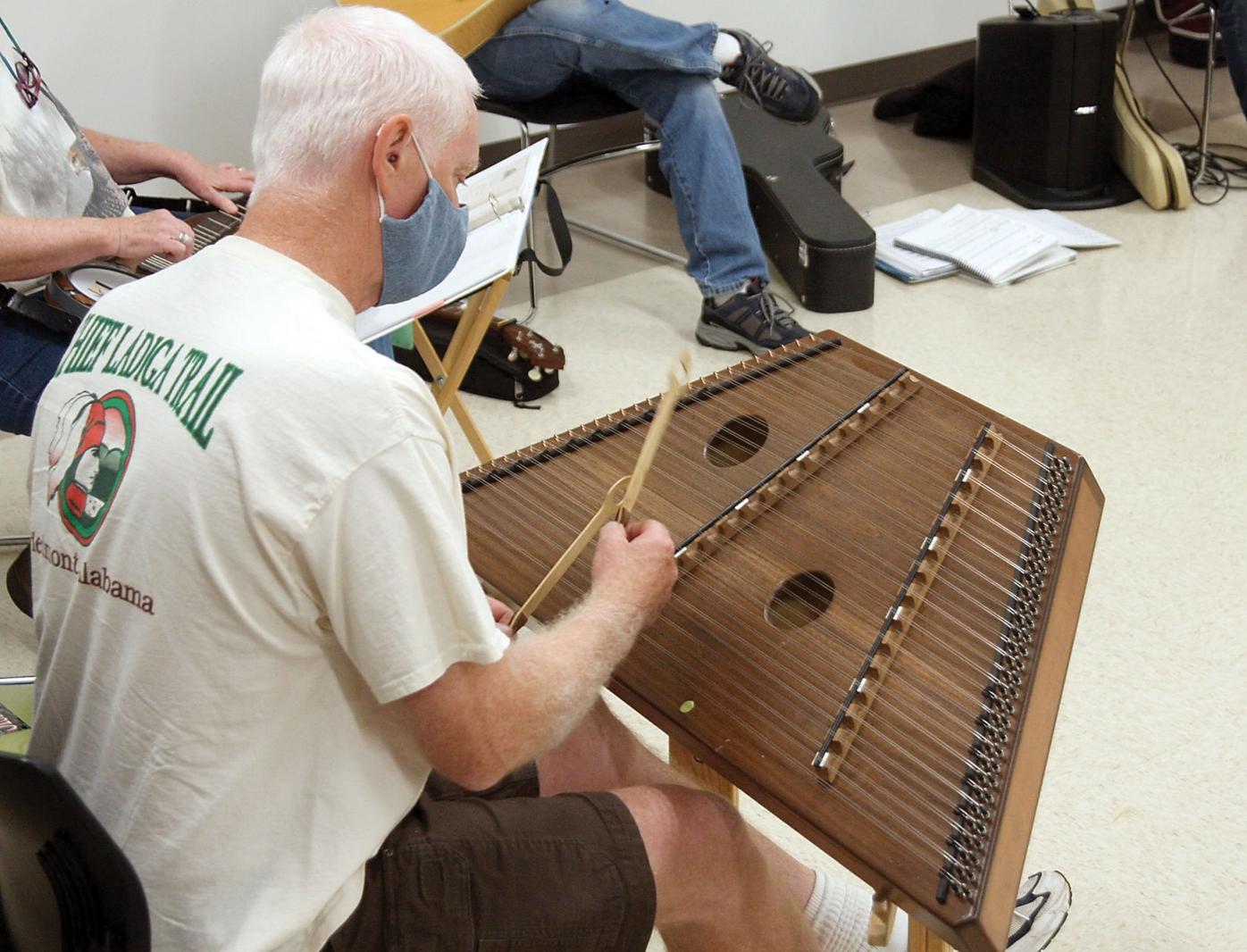 Dwight Elliott plays hammered dulcimer with the “Little River Jammers” in 2020, weeks after the group moved its weekly meeting spot to the Townsend Community Center.

Dwight Elliott plays hammered dulcimer with the “Little River Jammers” in 2020, weeks after the group moved its weekly meeting spot to the Townsend Community Center.

Since late 2020, there’s music on Monday nights at the Townsend Community Center and Town Hall.

That’s where a collective of friends and musicians gather with dulcimers, guitars, drums and fiddles at 6:30 p.m. each Monday. They don masks, circle chairs at least 6 feet apart and play traditional Americana, Irish and Scottish folk music for hours.

They call themselves the “Little River Jammers” and they’ve been religiously convening Monday nights since 2012, mostly in a building near the Wood-N-Strings Dulcimer Shop on East Lamar Alexander Parkway.

But in 2020, COVID-19 forced the group out of a space where it used to fit approximately 25 musicians. Social distancing just wasn’t possible and many members are retired. In fact, they stopped jamming altogether for three months when the pandemic hit.

“I reached out to one of our members and said, ‘We need a new place,’” Jerry Mitchell said just before 12 members started that night’s set. Mitchell serves as a spokesman for the group and plays the bodhrán, an Irish drum.

For a while during summer 2020, the Jammers went to Pearson Springs Park in Maryville to play outside. But they needed a more permanent spot to continue the legacy of mountain music in Townsend.

Ultimately, Mitchell called Townsend City Recorder Danny Williamson, who gave him a building tour and helped work out the details of renting the space each week.

“I’ll say it this way,” Mitchell said. “They have been most welcoming to us.”

More than one Townsend city employee rolled out the welcome mat for the musicians. Williamson helped them secure an ongoing calendar spot, Assistant City Recorder Gayla Fisher filmed the group and put clips on the city’s Facebook page and the late Mayor Ron Palewski advocated for them.

To honor him, the Jammers performed for Palewski’s widow, Lorraine, on Sept. 21, 2020. Her husband’s portrait sat at his old commission spot that night.

“He came down the first time they came to play and encouraged them: ‘Come on back. You see how nice the building is, you hear how nice it sounds,’” Williamson said of the late mayor. “He was instrumental in persuading them to come and use it.”

Palewski also was instrumental in building the community center.

Williamson said groups like the Jammers are exactly what the city envisioned when leaders started a building fund in 2015. Today, Townsend’s government has offices and a space for board meetings, but it also has a place to host community members.

‘Everybody’s got a story’

For the Jammers, having the community center space means members who didn’t feel safe earlier in the year because of the pandemic are now trickling back in Monday nights.

Founding members Karl and Phyllis Gombert are in their late 80s and didn’t play with the group during COVID-19.

But membership in the Jammers means more than just a chair in the circle. It also means friendship.

The musicians have been there to help the couple connect with the outside world during the pandemic. “There’s a camaraderie that’s formed,” Phyllis Gombert said. “And it seems to include everybody who walks in the door.”

Ever since Great Smoky Mountains National Park Ranger and banjo player Lisa Free, who has since passed, conceptualized the group nearly a decade ago, the Jammers have been adding members. Visitors would walk into the dulcimer shop Monday morning, hear about the group and start jamming that evening.

That welcoming spirit caused the group to grow from about six to the ensemble it is today. “Everybody’s got a story and people who come in to observe often join in, not only with their instrument but with their stories as well,” Phyllis Gombert said.

“It’s hard to find a place to accommodate the musicians and people who want to come and listen,” Karl Gombert added. A retired musicology professor, he said even though he and his wife haven’t been able to rejoin the group yet, they’re thankful for the new space.

The point of setting up with the dulcimer shop was to invite tourists and musicians alike to play and watch, he added.

At the community center, that’s more feasible than ever. Mitchell said they welcome visitors to their jam sessions, though they don’t want the meeting room to become too crowded for the time being.

“As long as they will let us stay here, we know now that we have this every Monday night,” he said. “I think this is our place for the long run.”

The Little River Jammers are part of a long history of traditional music in the East Tennessee corner of the Appalachians, a fact its members are proud of. But many of them play for the solace they find both in each other and the music.

“It’s very exciting to sit in the middle of that kind of a musical session,” Phyllis Gombert said. “The music is life-giving and uplifting, especially in these times.”