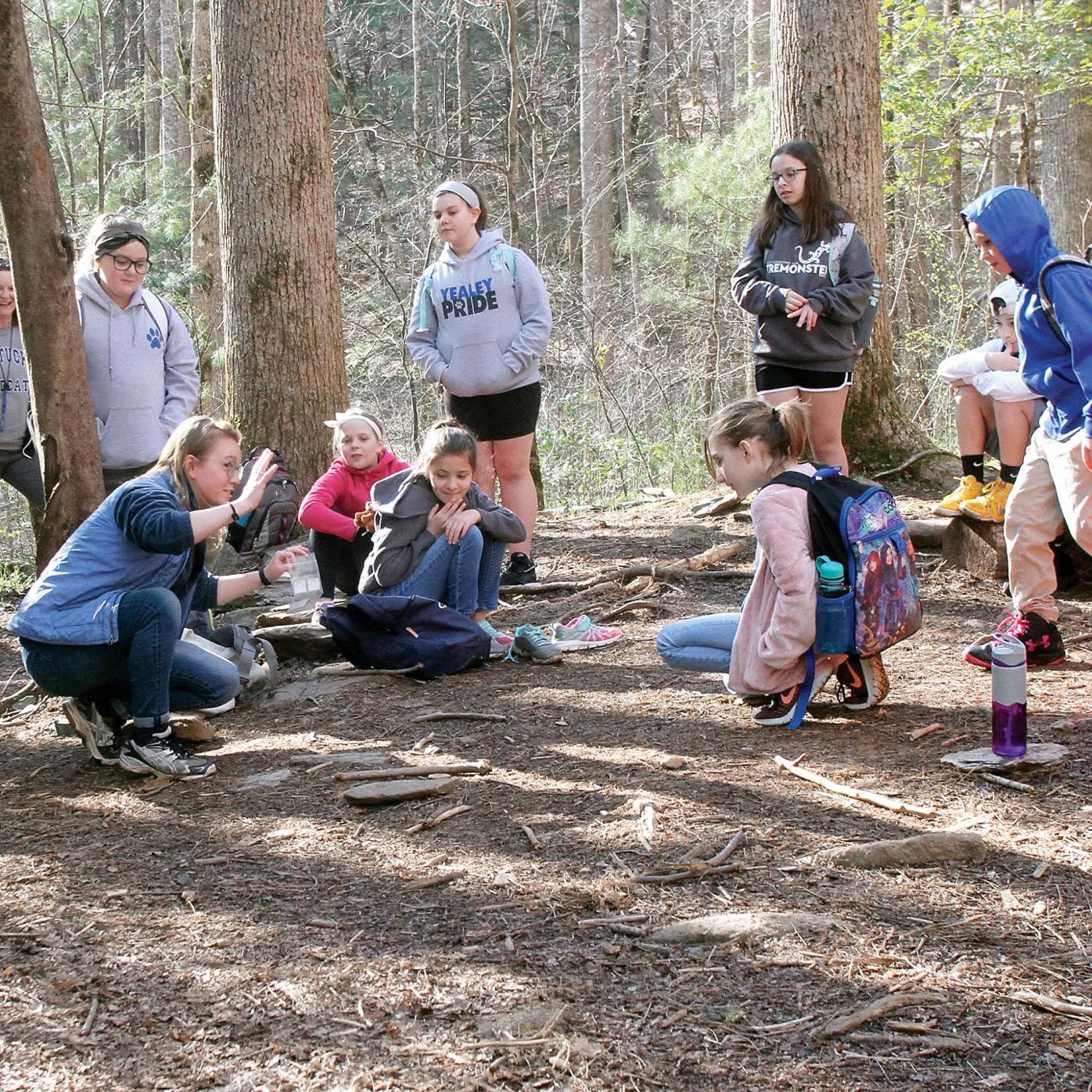 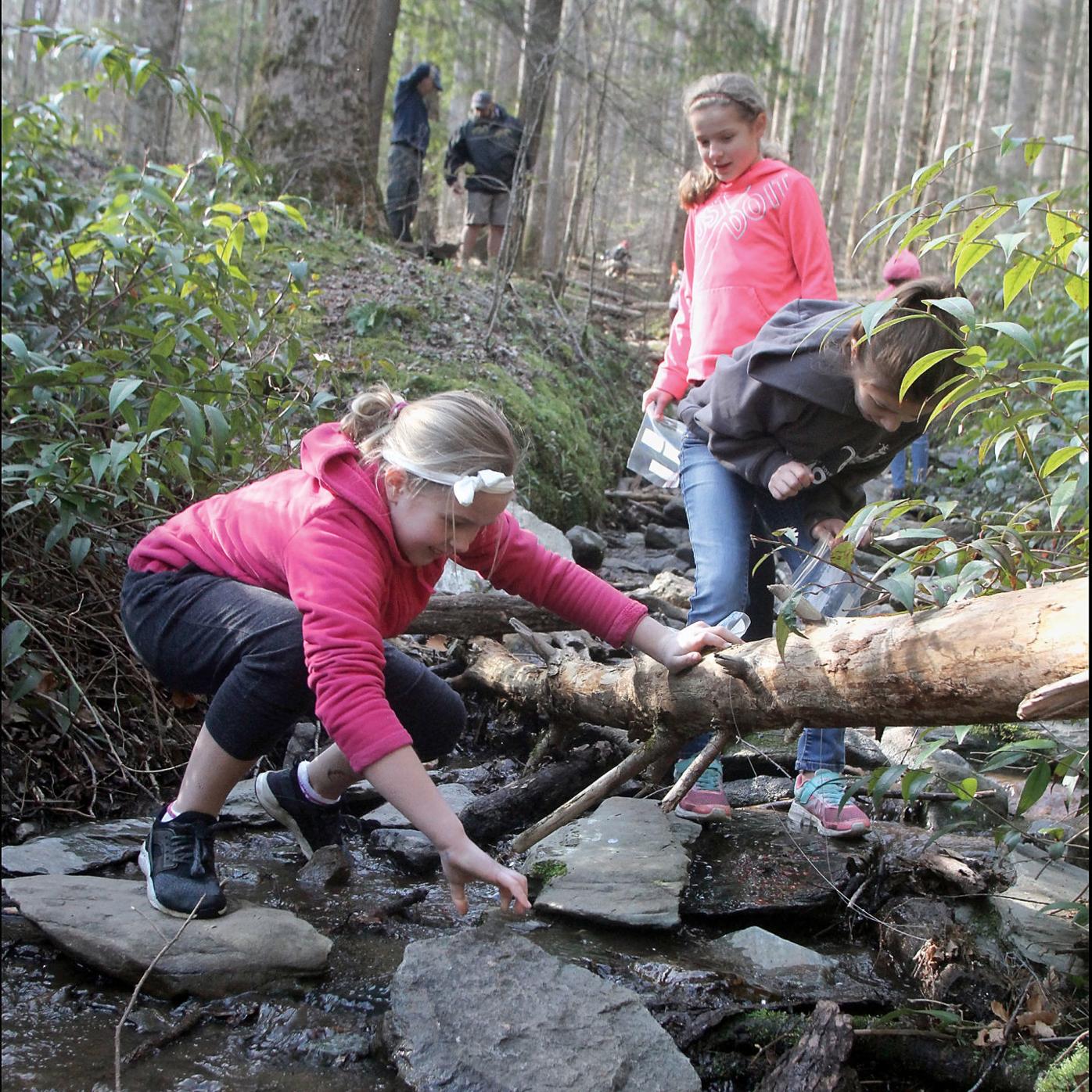 Students from A.M. Yealey Elementary School in Florence, Kentucky, search for salamanders in a stream at the Great Smoky Mountains Institute at Tremont. 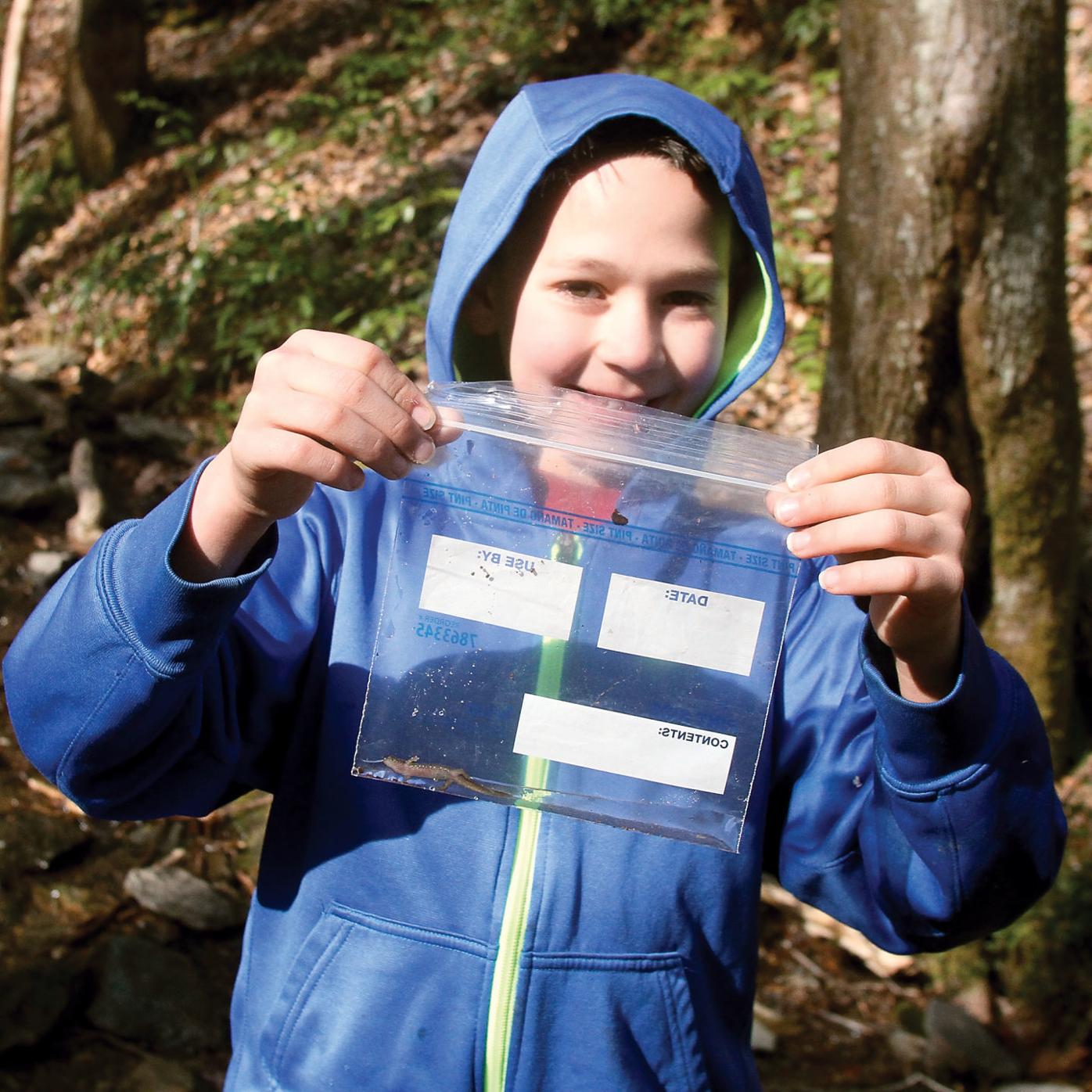 Alex Burlew holds a salamander he caught in a stream while learning about wildlife during a trip to Tremont. 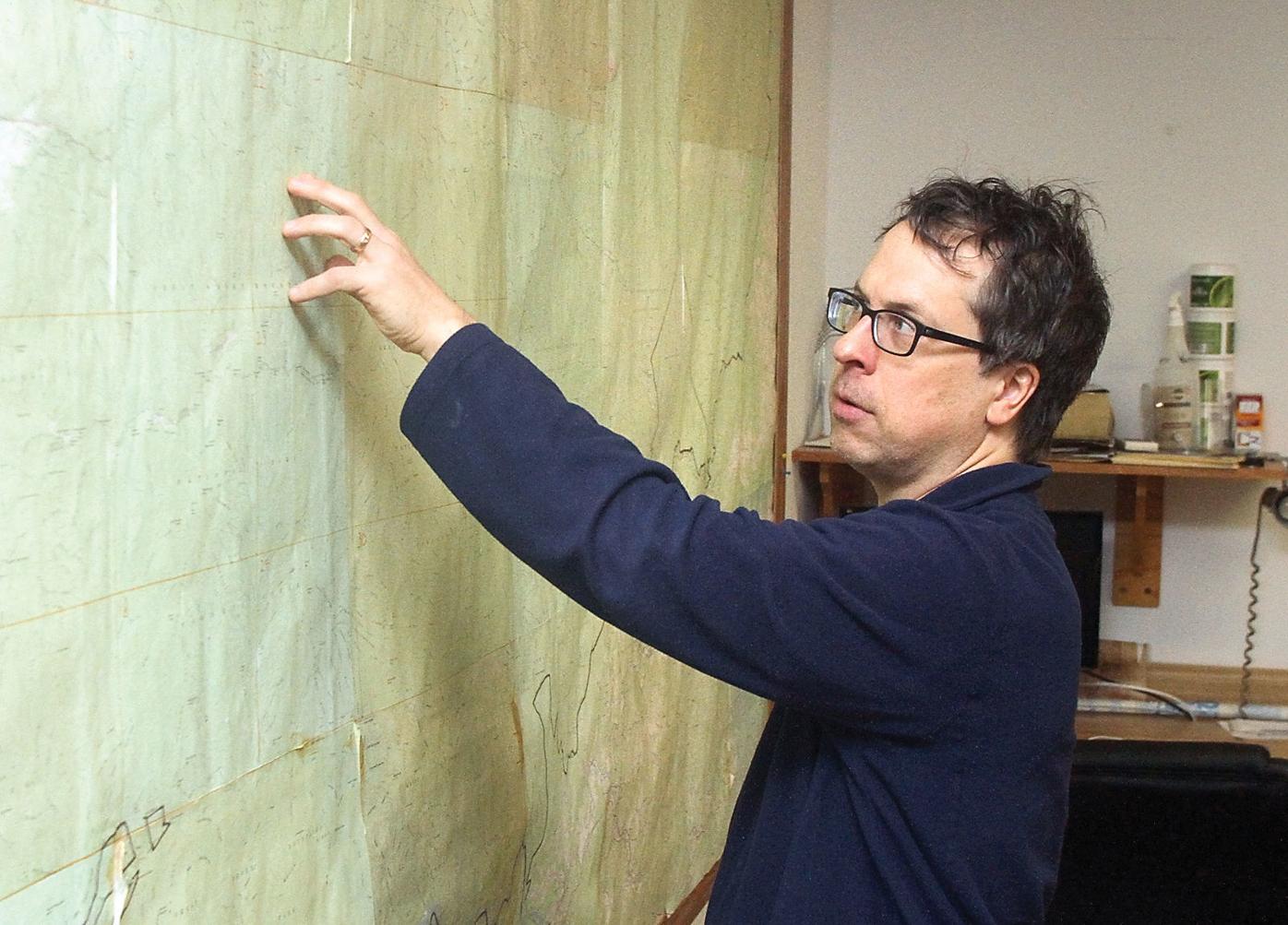 Jeremy Lloyd, manager of field and college programs at Tremont, locates the three mountains where the institute is located within the Great Smoky Mountains National Park. When the first post office was located in the area in 1926, another Walker Valley existed, so the logging town's name came from a combination of trees and mountains. 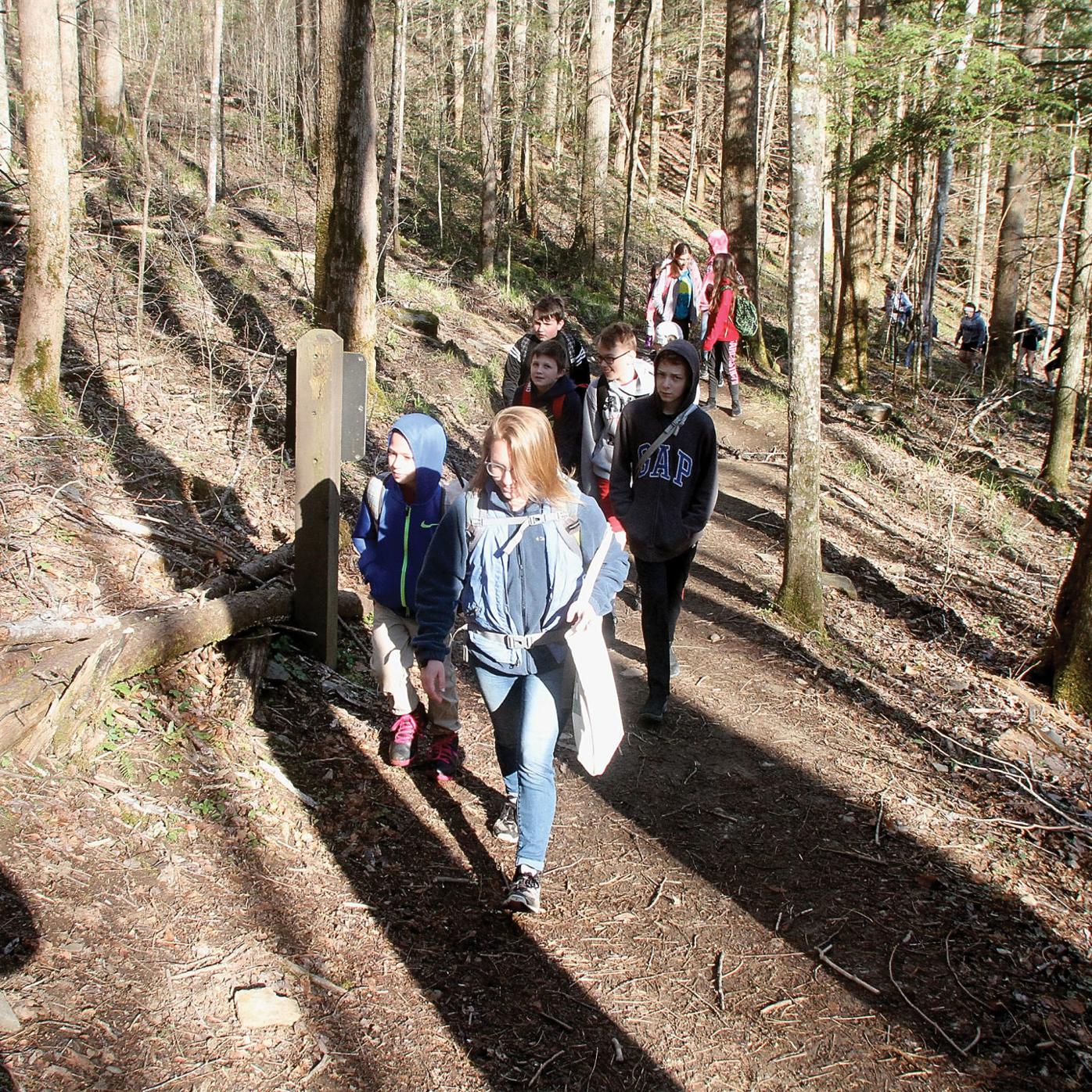 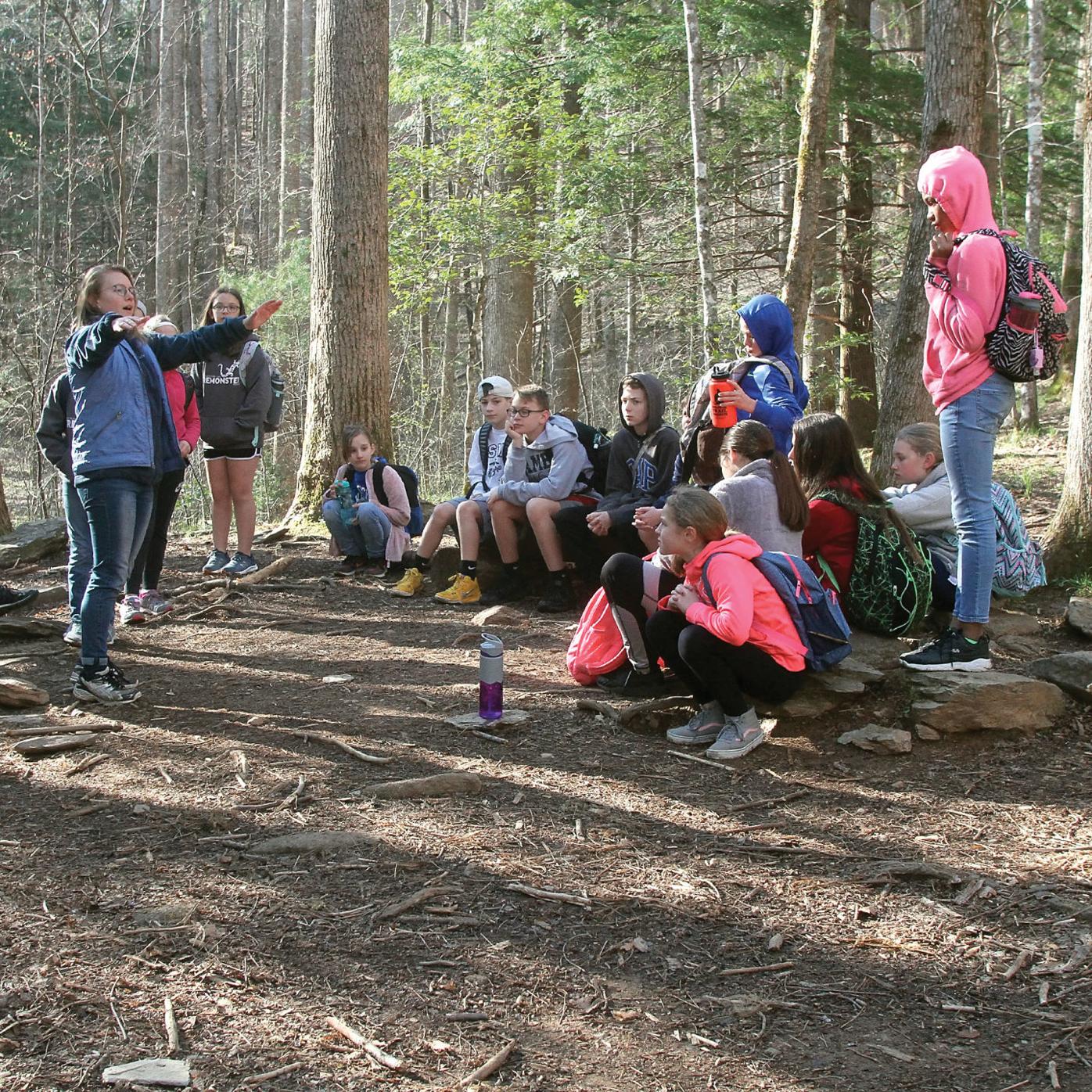 Students from A.M. Yealey Elementary School in Florence, Kentucky, search for salamanders in a stream at the Great Smoky Mountains Institute at Tremont.

Alex Burlew holds a salamander he caught in a stream while learning about wildlife during a trip to Tremont.

Jeremy Lloyd, manager of field and college programs at Tremont, locates the three mountains where the institute is located within the Great Smoky Mountains National Park. When the first post office was located in the area in 1926, another Walker Valley existed, so the logging town's name came from a combination of trees and mountains.

The transformations can begin within an hour.

After a long bus ride, perhaps overnight from another state, the students stow their gear in the dorm, eat lunch and head outside.

A short orientation leads to their first exploration in the Great Smoky Mountains National Park. Some of the students have never been in a location where the view was devoid of buildings of any kind.

A short time later, adolescents accustomed to taking selfies are painting their faces with “rock paint” from sandstone in the creek for a game of “camouflage” in the woods. In the game, one participant is designated as the hunter and will try to spot the others peering out from behind trees. Later they will catch salamanders in the creek.

Schoolchildren who prefer to spend their Saturdays watching YouTube videos or playing computer games discover something new they love to do: hiking.

A student who’s often disruptive in a classroom becomes deeply engaged in learning, a lesson for the teacher that can change the dynamic in school for the rest of the year.

Jeremy Lloyd has seen it happen over and over, group after group and year after year. Currently manager of college and field programs at the Great Smoky Mountains Institute at Tremont, he has worked at the experiential education program for nearly half its 50-year existence.

He sees the mission of connecting people with nature as perhaps even more important in today’s digital environment than when the Tremont program started in 1969.

“Kids need to be outside not only for the future of the environment, so we conserve these places, but for their own mental health,” Lloyd said.

Young people today are so stimulated by screens that their senses have been deprived, he said. When they spend time outside, “it’s like filling a cup they didn’t know was empty.”

“We are meant to have dirt under our fingernails and rain on top of our heads,” he said. “When we insulate ourselves too much from nature, we become less human.”

During an all-day stream class, students discover everything from tiny macroinvertebrates living in the water to the forces of nature that shaped the mountains over millions of years.

“How is it in our culture today that we know more about the private lives of movie stars than we do the names of the trees and birds that live in our own backyard? There’s something wrong with that picture,” Lloyd said.

“Why is it that we know the Amazonian rainforest is being wiped out and global warming is a huge issue around the world, and yet we don’t know the more local issues in our own area?” he asked. “It’s not that the names are so important. It’s just that when you know the names of things, your world is suddenly bigger. These things exist in the world, and we need to take care of them, or at least let them be.”

The focus that experiential education — specifically Tremont — can provide is something that President and CEO Catey Terry discovered firsthand when she visited the Smokies as a sixth-grader.

“At that time in my mind, environmentalism was save the polar bear or acid rain. It was all of these far-fetched places that you had to pay money to support,” she recalled. “And then you came to Tremont, and it became so personal. It was, ‘You can make small changes.’” Lessons in environmental stewardship were brought home with practices such as leaving zero food waste on plates and turning off the water tap while brushing teeth.

Tremont not only teaches children and adults on site but also trains educators to provide experiences and lessons they can use in their own schools.

“What we hope above all is that people see the value of places everywhere, and especially where they come from,” Lloyd said. “Those places need to be taken care of as much as our national parks.”

Experiential education is different for everyone, Terry said, but starts with asking what people notice and what they wonder about what they have noticed.

“You’re piquing their curiosity, and that’s where the magic happens,” she said.

The lessons aren’t all about the environment but include rich personal experiences, from developing responsibility to friendships and a sense of community.

After a family camp, parents will say the dynamic has changed in their relationships but struggle to put the difference into words.

During school trips the students learn to take care of their own needs, whether that’s dealing with wet clothes or cleaning a mess on the table. While adults are there to guide them, no one is stepping in and doing it for them.

“You’re not going to have everything you think you need right when you want it,” Lloyd said, and people discover the list of things they truly need is pretty short.

“Happiness turns out to be a pretty low-hanging fruit,” he said.

Tremont may be best known for its school programs, but those are only a fraction of what it offers.

College students come from across the country to study at Tremont, and not just environmental subjects. For example, a political science class from Alabama visits every other year, delving into topics such as park administration.

Tremont works with educators to create syllabi and has longstanding partnerships with the University of Tennessee, Maryville College and Roane State Community College. The wilderness first responder program it offers with Roane State is the only course to offer experience within the national park.

Grandparents bring preschoolers to Firefly Camp, retirees flock to the Road Scholar weeks for hiking, and then there are the workshops with nationally recognized wildlife photographers in both spring and fall. The women’s backpacking weekend provides not only all the equipment but also a naturalist to guide the participants.

Before she applied for the top job at Tremont in 2018, Terry confessed, “I didn’t realize the scope of the citizen science that we do, the monarch tagging and the bird banding,” for example, along with half a dozen other programs.

Lloyd calls Tremont’s family camp, “One of the least expensive vacation packages in the Smokies, with built-in activities.”

Those who haven’t registered for a program are welcome to stop by the Tremont office and gift shop, about 4 miles inside the Townsend entrance to the Great Smoky Mountains National Park. At the office, visitors also learn more on their way to a day hike on Middle Prong trail, created from an old railroad bed, or get directions to Spruce Flats Falls, a 2-mile round trip hike that isn’t on the national park maps.

Plan now for your next Tremont adventure

Following is a list of upcoming programs at the Great Smoky Mountains Institute at Tremont. For a full list of programs, registration requirements and any fees, visit www.gsmit.org.